Accessibility links
Hoping To Replicate 2016 Win, Trump Will Make Late Trip To Grand Rapids President Trump may end the campaign with an election eve rally in Grand Rapids — the place where he held a late-night event in 2016 before winning Michigan and the presidency. 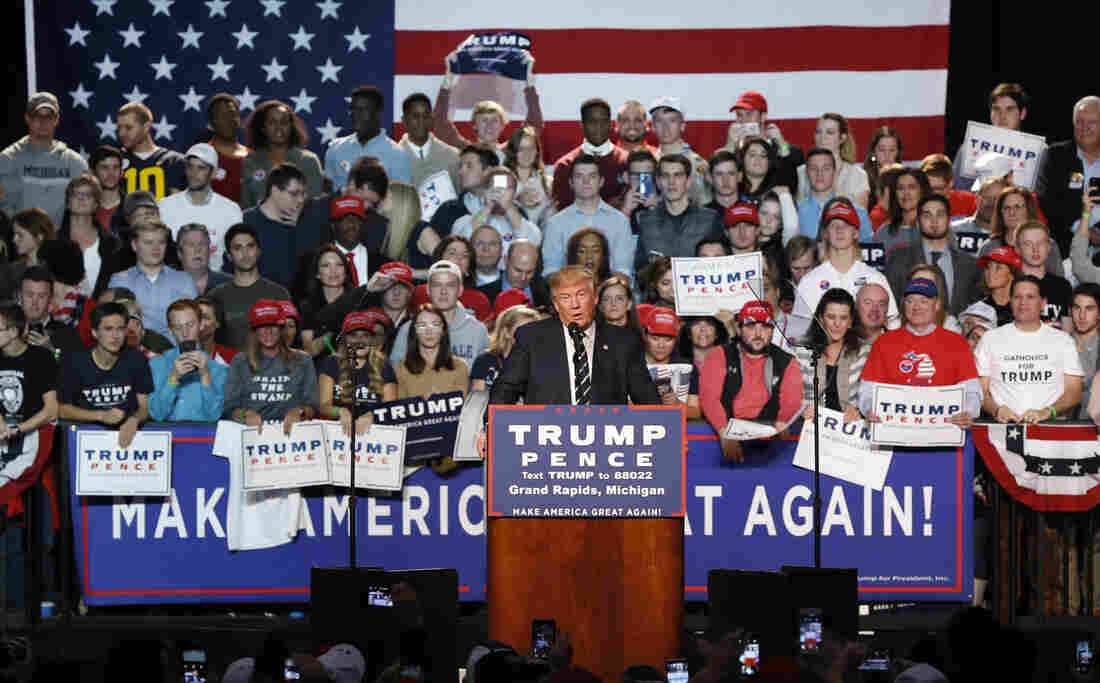 Donald Trump campaigns in Grand Rapids early on Election Day 2016, the final rally of the campaign. Trump may finish out his 2020 campaign in Grand Rapids on Monday night. Paul Sancya/AP hide caption 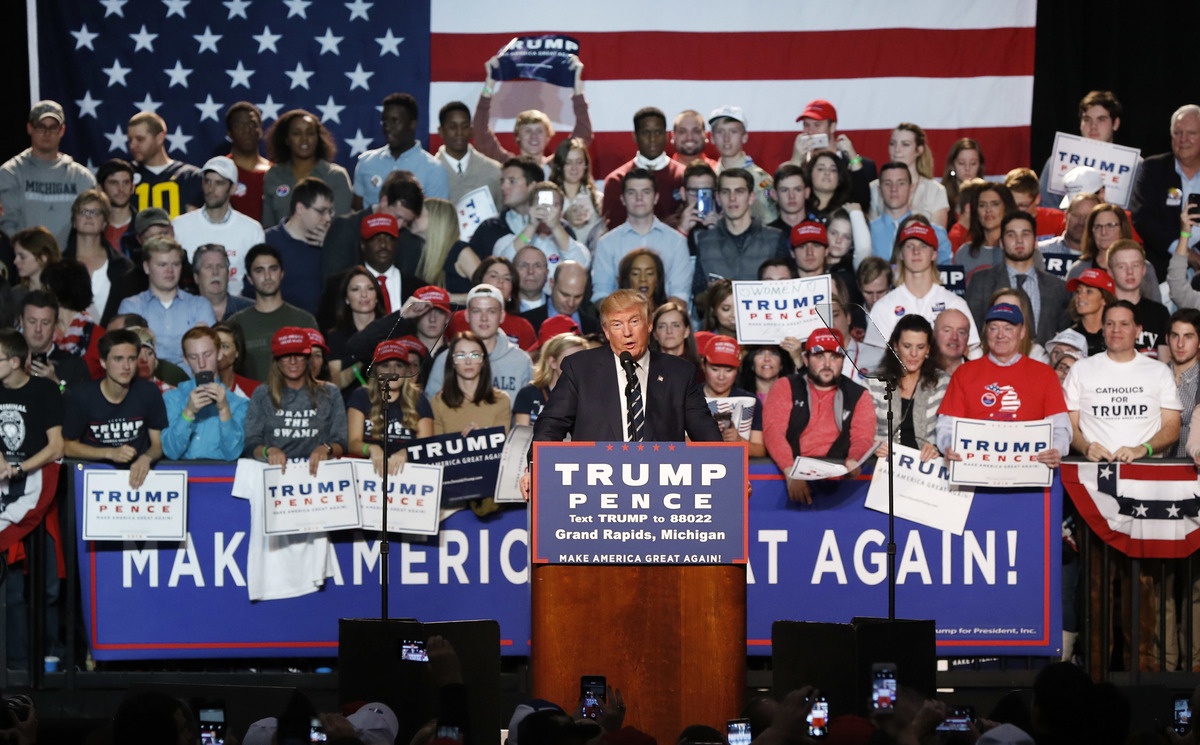 Donald Trump campaigns in Grand Rapids early on Election Day 2016, the final rally of the campaign. Trump may finish out his 2020 campaign in Grand Rapids on Monday night.

It was after midnight when Donald Trump took the stage in Grand Rapids, Mich., for his last rally of the 2016 presidential campaign. A late-night event scheduled for the last day of campaigning had creeped into the wee hours of Election Day.

"Michigan stands at the crossroads of history," Trump told supporters inside a downtown convention center. "If we win Michigan, we will win this historic election."

Tacked onto the schedule at the urging of the state's Republican Party chair, the Grand Rapids rally has since become a key part of the story the president tells about his unlikely road to the White House. The next day, Trump went on to win Michigan by 10,704 votes, the first GOP presidential candidate to carry the state since 1988.

Now, lagging in the polls and looking to rekindle the magic of 2016, Trump may conclude his final campaign for the White House with an election eve rally in Grand Rapids on Monday night.

At an event in Michigan in September, Trump recounted those final days of his 2016 campaign, when polling showed Hillary Clinton as the clear favorite to win and hold the so-called "Blue Wall" states of Wisconsin, Pennsylvania and Michigan. Trump says Ronna McDaniel — then chair of the Michigan Republican Party, now chair of the Republican National Committee — urged him to hit Michigan one more time.

"She said, 'I'm telling you, sir, one more speech.' I said I would do it one more time, but that is it," Trump recalled. "The day after I got back, I said, 'I just got back from Michigan, it was wonderful.' I got a call from Ronna McDaniel, and she said, 'Can you do another speech?' She is the one that got me here after midnight." 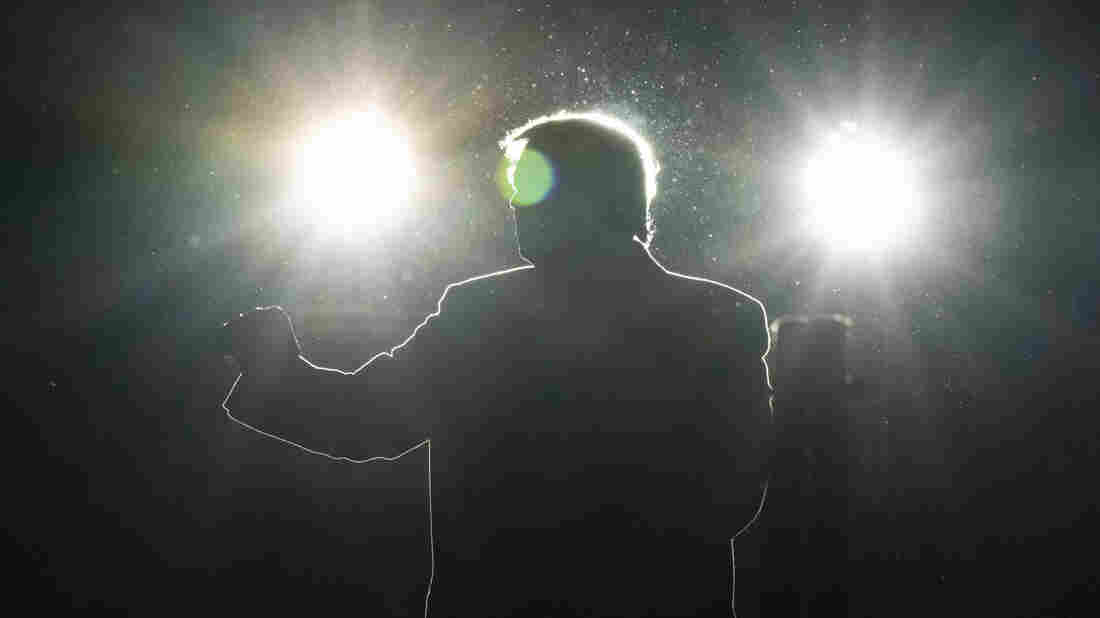 President Trump departs a campaign rally in Butler, Pa., on Saturday. Michigan, Wisconsin and Pennsylvania propelled him to the White House in 2016. Alex Brandon/AP hide caption 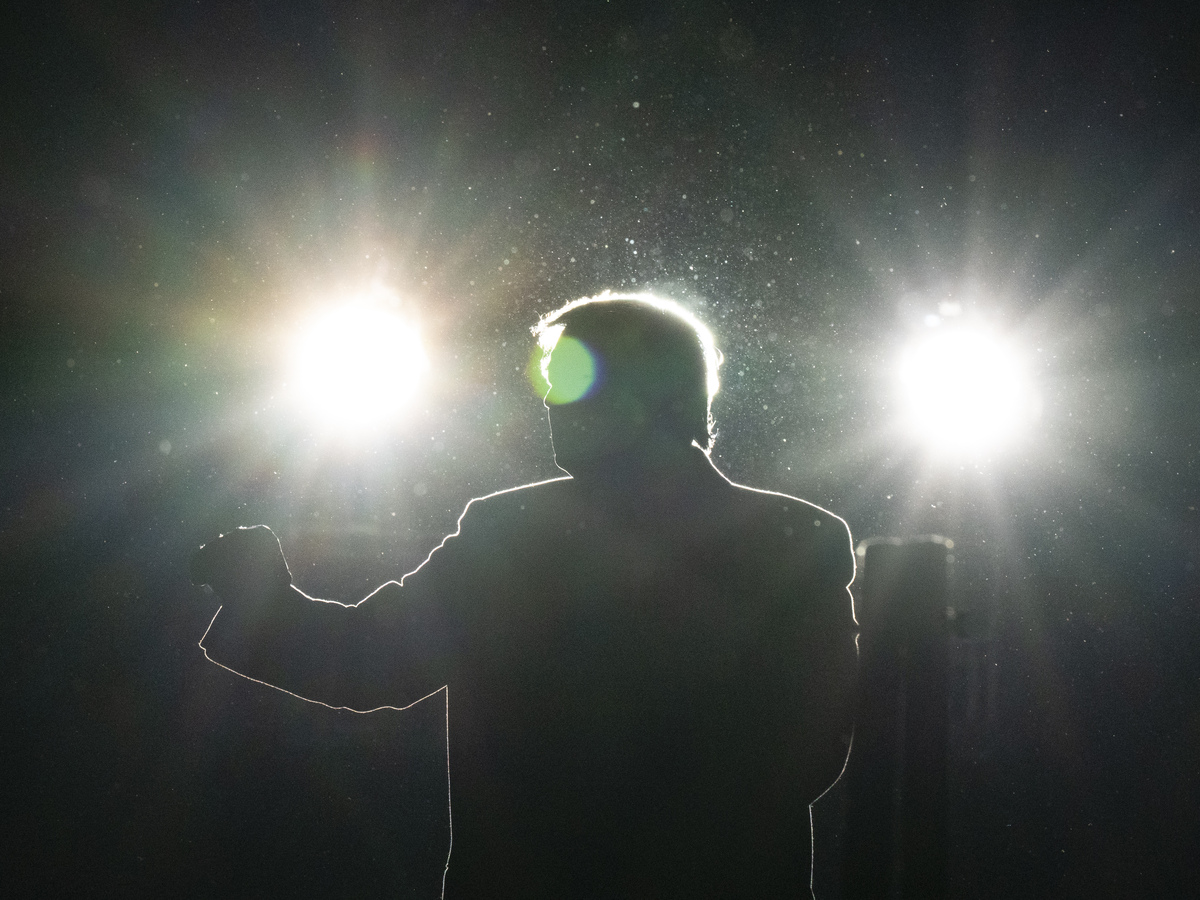 President Trump departs a campaign rally in Butler, Pa., on Saturday. Michigan, Wisconsin and Pennsylvania propelled him to the White House in 2016.

Michigan is again an important state for Trump, but repeating 2016 may prove challenging. Democratic nominee Joe Biden has held a clear advantage in the state's polling average — by wider consistent margins than surveys gave Clinton.

And in 2018, Michigan voters flipped the three highest statewide offices blue, including the governor's mansion, part of a blue wave that swept the nation.

"A visit at the end was just icing on the cake," John Sellek, a Republican political strategist in Michigan, says of the 2016 rally. Now, he says it's "more necessary to try to slow the bleeding" in the suburbs.

The evolution of a swing county

Once reliably conservative like most of Western Michigan, Kent County, home to Grand Rapids, is turning bluer. The shifts happening in Kent County mirror many of the hurdles to reelection Trump is facing across the country.

The Grand Rapids area is growing faster than any other part of Michigan and its suburbs are becoming more Democratic. Unhappiness with Trump is driving many well-educated voters, especially women and seniors, away from the Republican Party. The area is also becoming younger and more diverse.

"There's no doubt that Kent County may be a little bit late to the swing county category, but it's arrived and it requires a visit and a message from the president to reassure those voters," Sellek says.

Barack Obama flipped traditionally Republican Kent County in 2008, but Mitt Romney won it back in in 2012. In 2016, Trump won Kent by 9,400 votes, or 3%, a slimmer margin than Romney's victory there four years earlier.

In 2018, Democrat Gretchen Whitmer won Kent County by 11,600 votes in her successful campaign for governor.

With a Grand Rapids visit, Sellek says Trump's best shot, at this point, may be to hold on to as many of Western Michigan's conservatives as he can and try to juice turnout in nearby rural counties for low-propensity voters likely to support him.

"To win, he needs to pull in as many of these conservative Christian voters as he can," Sellek says. "His mission there will be to remind them of the importance of things like Amy Coney Barrett," Trump's most recent appointee to the Supreme Court, whom the Senate confirmed last week.

Brandon Dillon, who chaired the Michigan Democratic Party in 2016 and lives in Grand Rapids, says there were only two areas in Michigan that year where he saw an increase in the Democratic votes for president — reliably liberal Ann Arbor and Grand Rapids. He predicts Kent County's shift toward Democrats has accelerated since then.

[I]t seems to me that he's trying to replicate the map and the strategy of 2016 without understanding that the dynamics of 2020 are not the same.

"I think what's really different now between four years ago is, No. 1, people have had four years to see what a Donald Trump presidency would look like," Dillon says. "And by and large, a lot of the voters that either took a chance on him because they didn't like Hillary Clinton or voted for him because they were lifelong Republicans, they're just totally turned off by him."

Dillon says he thinks Trump's stop in Grand Rapids on Monday night could actually hurt the president with any undecided voters, reinforcing what they already don't like about him.

"Every time he does one of these rallies and talks about locking up Gov. Whitmer and starts talking about how we're turning the corner on coronavirus, you know, those are all things that people in Kent County know not to be true," Dillon says. "Coronavirus is spiking here in Kent County. And the way he diminishes it is — just it seems to me that he's trying to replicate the map and the strategy of 2016 without understanding that the dynamics of 2020 are not the same."

Gary Stark, chair of the Kent County Democrats, says the energy feels different this year, too, driven both by the president and demographic shifts. He says the party office has been flooded with volunteers, many of whom say they are Republicans who plan to vote for Biden this year.

"Biden yard signs flew off the shelves in August and September," Stark says. "Couldn't keep any in stock."

A former Army Ranger and lifelong Republican, Mitch Monnin picked up a Biden sign at the Kent County Democrats office a few weeks ago. He told NPR last month that he voted for Libertarian Gary Johnson in 2016, but this time, he will vote for Biden.

"Four more years of a Trump presidency, I truly believe, I don't know that the body politic would survive it," Monnin said. "So in this case I'm going to be voting for Vice President Biden, not because I agree with his policies — I vehemently disagree with quite a few of them — but I truly believe that at his core, he is a fundamentally decent human being." 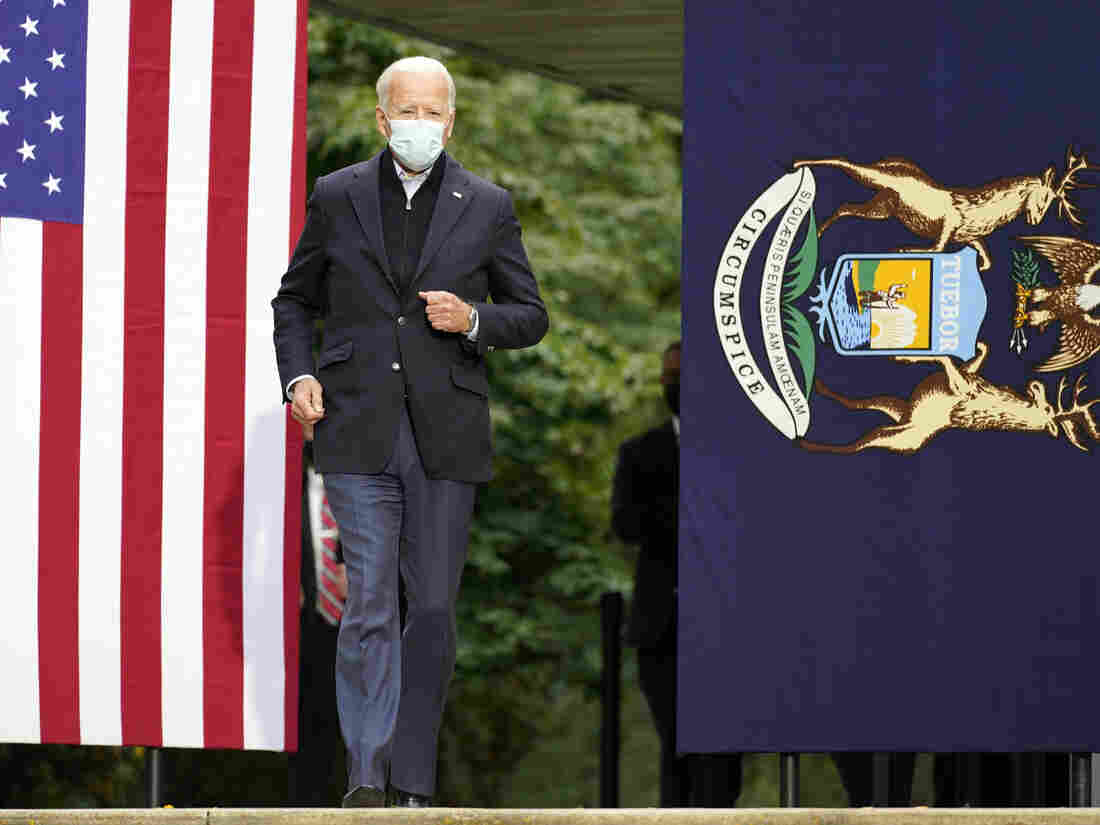 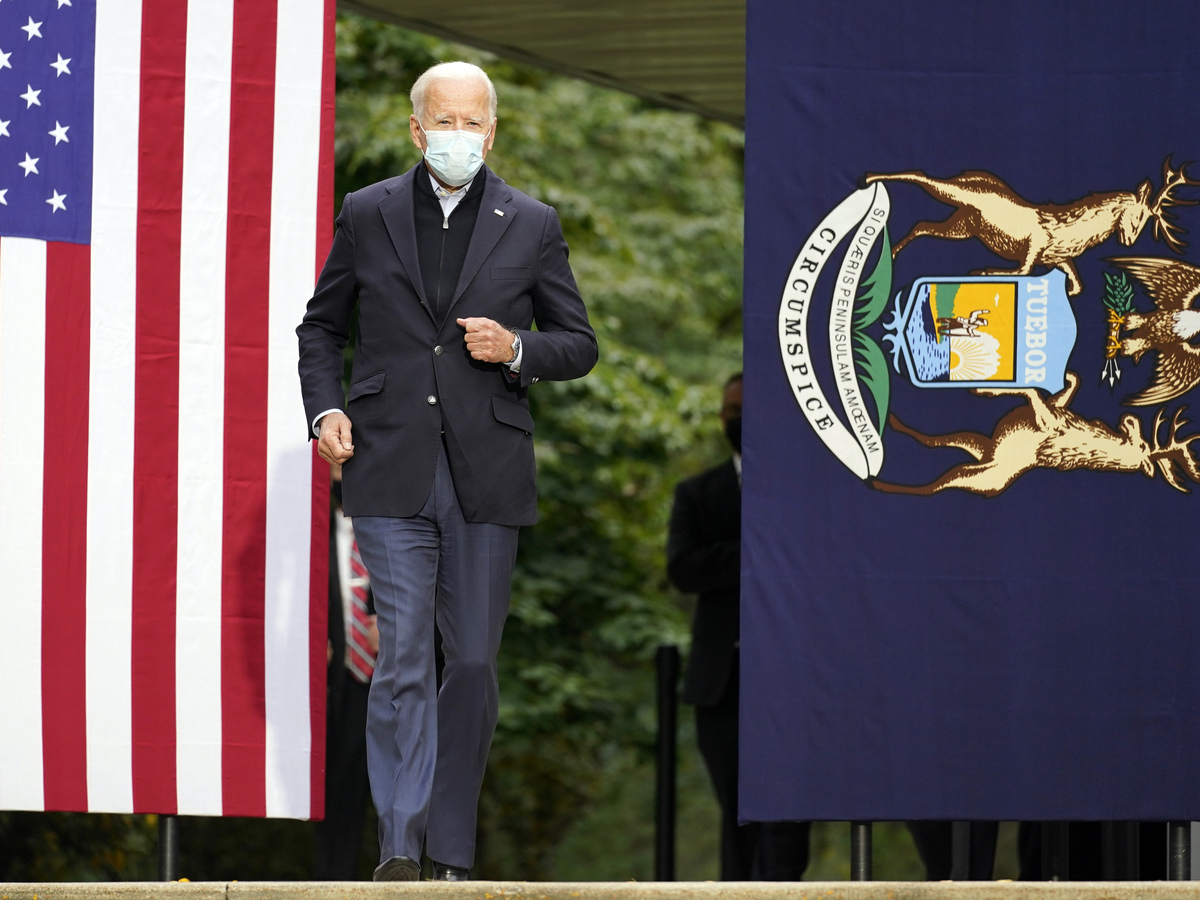 But if history is any guide, the president's supporters in Kent County say a come-from-behind win in Michigan can happen.

Rusty Richter, a Kent County real estate agent who has been active in Republican politics for years, says he's felt a surge of energy at campaign events and hears from friends and neighbors constantly that they're voting for the president but are hesitant to display his yard sign.

For weeks, Richter has been predicting that Trump would conclude his campaign back in Grand Rapids, just as he did in 2016. Richter was in the crowd that night, with his wife, in the VIP section right behind Trump. They'd been standing for several hours by the time Trump began to speak, his last stop after a multistate day of events.

"But the energy in that room was just palpable. You just felt like we were a part of history," Richter remembers. "There was something surreal in that room. These people were thrilled, excited and yeah, I've never been to anything like that before or since. This thing was magical."

Why More White Voters May Not Support Trump In 2020

Why More White Voters May Not Support Trump In 2020

Carly Nelson, a West Michigan native who has worked in GOP politics for the last several cycles, remembers the night as uplifting, patriotic — and also the moment she started to think Trump had a shot to win.

"At that point, it felt pretty real that he could win Michigan, and leading up to that, I didn't necessarily believe that that was the case," she says. "At the rally, it definitely occurred to me that Trump could be elected."

Richter remembers sitting next to a pollster that night in 2016 who did internal surveys for the campaign. Until then, Richter had also thought a Trump win in Michigan was not likely. But the pollster told Richter the campaign was seeing numbers that suggested otherwise.

Richter will be there again in the audience Monday night, bundled up with his wife for the outdoor event, again seated in the VIP section.

He says he is feeling optimistic that Trump can pull off Michigan, and the presidency, one more time.