Accessibility links
2020 Elections Are A Test For Governors And Their COVID-19 Responses The races for governor in Missouri and North Carolina may tell us if the coronavirus can make or break a state leader. Meanwhile, political strategy in Montana has tempered talk of COVID-19.

In 2020, Gubernatorial Elections Are All About COVID-19

In 2020, Gubernatorial Elections Are All About COVID-19 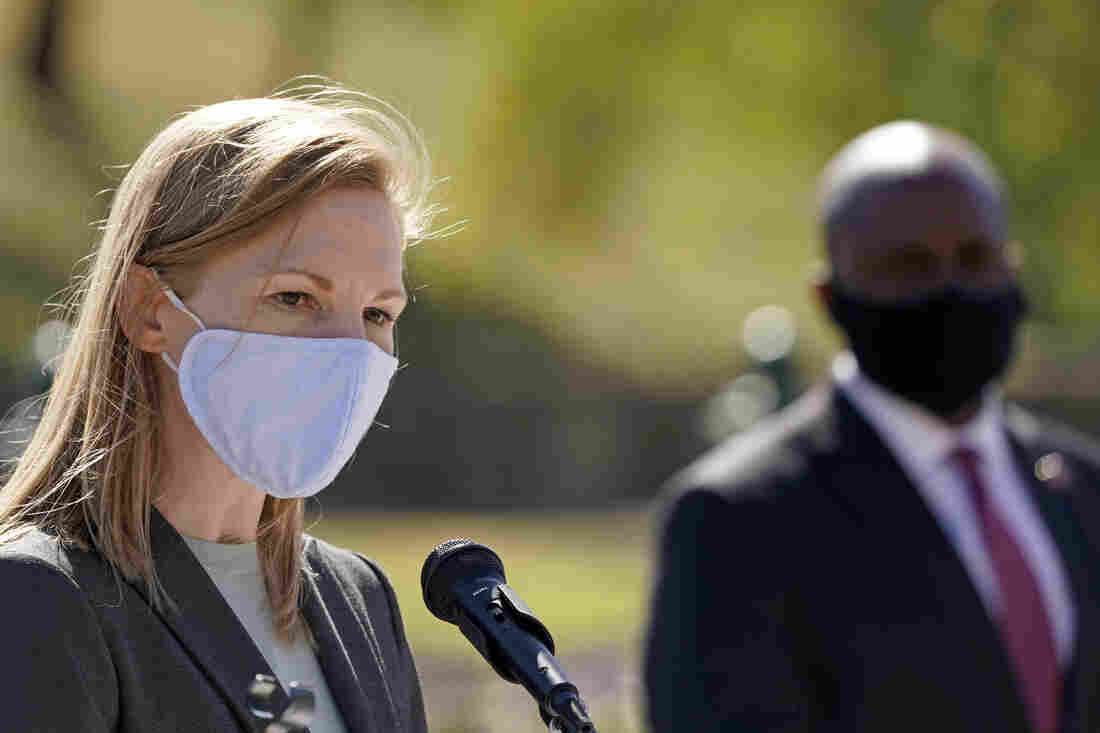 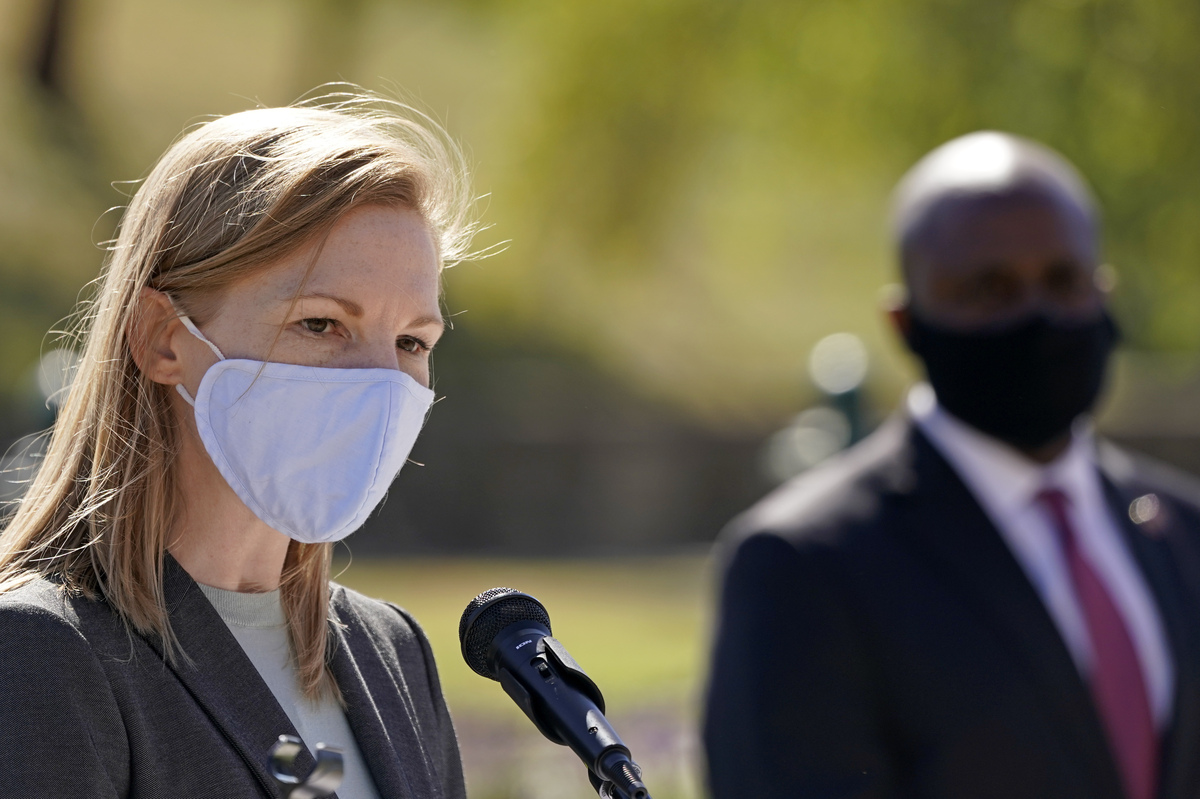 In a way, 2020 has felt like the year of the governor, with so many people focused on states' (as opposed to the federal) coronavirus response. President Trump has waffled between praising and slamming governors for their actions around COVID-19. If Gov. Andrew Cuomo of New York, Gov. Gretchen Whitmer of Michigan and Gov. Brian Kemp of Georgia had star power before, it's even more pronounced nearly eight months into the pandemic.

But 2020 is also a slow election year for governors. Out of the 11 on the ballot across the country (Delaware, Indiana, Montana, Missouri, North Carolina, North Dakota, New Hampshire, Utah, Vermont, Washington and West Virginia), only three races are considered competitive. Those are in Montana, Missouri and North Carolina.

In Missouri and North Carolina, COVID-19 couldn't be more of an issue. Those races may tell us whether the coronavirus has the power to make or break a governor. In Montana, though, politics have complicated the issue.

When Republican Gov. Mike Parson took the stage in January to deliver the Missouri State of the State, he was able to hang his hat on a stronger economy and better-than-average unemployment rates. His path to victory looked easy. Since then, the coronavirus has caused immense challenges to the state's health care system and decimated the economy.

"This has been a test of leadership, and he's failed that test," said Nicole Galloway, Parson's Democratic challenger and Missouri's state auditor, in an interview with St. Louis Public Radio. "Gov. Parson's approval rating has dropped 22 points because of his poor handling of COVID," she said.

Parson was one of the last governors in the country to issue a statewide stay-at-home order, although he let most businesses stay open. He said he wanted the decisions left up to local governments.

"I've been pretty open about that the entire time," he said, talking to St. Louis Public Radio. "I think it was important to leave it up to the locals."

Parson has refused to implement a statewide mask mandate despite the White House Coronavirus Task Force urging him to do so. "It's almost become a political issue, we all know that," he said.

The 65-year-old and his wife contracted the virus in late September. He was asymptomatic, but his wife fell ill. That didn't change his state response, though. "You have to live in concern, but you don't have to live in fear of it," Parson has said.

Galloway, 38, wants to provide more guidance for schools to resume in-person learning. She also wants to put a mask mandate in place, calling masks a ticket to freedom. "That is a science-backed, data-driven approach to slowing the spread of the virus so we don't have to shut down again."

Galloway has been able to attract many more individual donations than the governor, although most polls, if not all, show Parson leading. For Galloway to win, she'll need to regain lost ground in rural Missouri and have a strong show of support in urban areas.

Cooper, a 63-year-old Democrat and native of North Carolina, is up for reelection in a year when he has had to guide the state through the coronavirus pandemic, and voters seem to like the job Cooper has done. Since March, he's held on to relatively high approval ratings.

In North Carolina, Stakes Are Just As High In Down-Ballot Races

In North Carolina, Stakes Are Just As High In Down-Ballot Races

That hasn't stopped Forest, 53, from criticizing Cooper every step of the way. Earlier this year, Forest sued Cooper over some of his coronavirus-related executive orders, arguing that the governor shouldn't have the power to issue those orders on his own. The lieutenant governor later dropped the lawsuit.

In the last month, coronavirus numbers have spiked in the state, and during that time polls have shown Cooper's lead narrowing slightly. He has had a healthy lead over Forest since the primary, and a Forest win would be surprising to followers on both sides of the aisle.

Cooper has been in state politics for decades and enjoys widespread name recognition. That's not the case for Forest.

Trump carried voters in Montana by 20 percentage points in 2016, but while it is often thought of as a red state, Montana is full of split-ticket voters and has had a Democrat in its governor's office for 16 years.

The current Democratic governor, Steve Bullock, is limited by term and running for U.S. Senate, leaving the seat open.

The candidates vying for the position have been neck and neck in the polls since the primary. Even though COVID-19 is raging in Montana, neither Republican Greg Gianforte nor Democrat Mike Cooney has made it a key talking point for their campaigns.

As lieutenant governor, Cooney is close to Bullock. Any criticism of the governor's virus response could jeopardize Bullock's bid for Senate. Bullock mandated masks statewide in July, but now some hospitals are overwhelmed, the state is considered a hot spot and Bullock hasn't imposed new restrictions.

As a Republican, Gianforte has said he is against Bullock's statewide mandates, even as case numbers have surged. If elected, he said his coronavirus response would defer to individual choice.

Gianforte is a tech billionaire whose pitch to be Montana's next governor is similar to what Trump's was to voters as a presidential candidate in 2016. Gianforte said he will slash regulations, reduce taxes and install new leaders at state agencies

Cooney has been a public servant his whole career and says he wants to safeguard and build on Democratic priorities, such as protecting Medicaid expansion and pushing through a public preschool program.

Recent polls have shown Gianforte with an edge over Cooney but within the margin of error. Montana, like many states, has experienced enthusiastic election participation and has broken its voter turnout record.