Accessibility links
In Robert Putnam's 'The Upswing,' History Holds The Keys For Moving Away From Today's Tumultuous Age Bowling Alone author Robert Putnam joins with Shaylyn Romney Garrett to form the thesis that America's Gilded Age shows remarkable similarity to today — with a societal focus on "I" rather than "we."

In 'The Upswing,' History Holds The Keys To Moving Away From Today's Tumultuous Age

In 'The Upswing,' History Holds The Keys To Moving Away From Today's Tumultuous Age 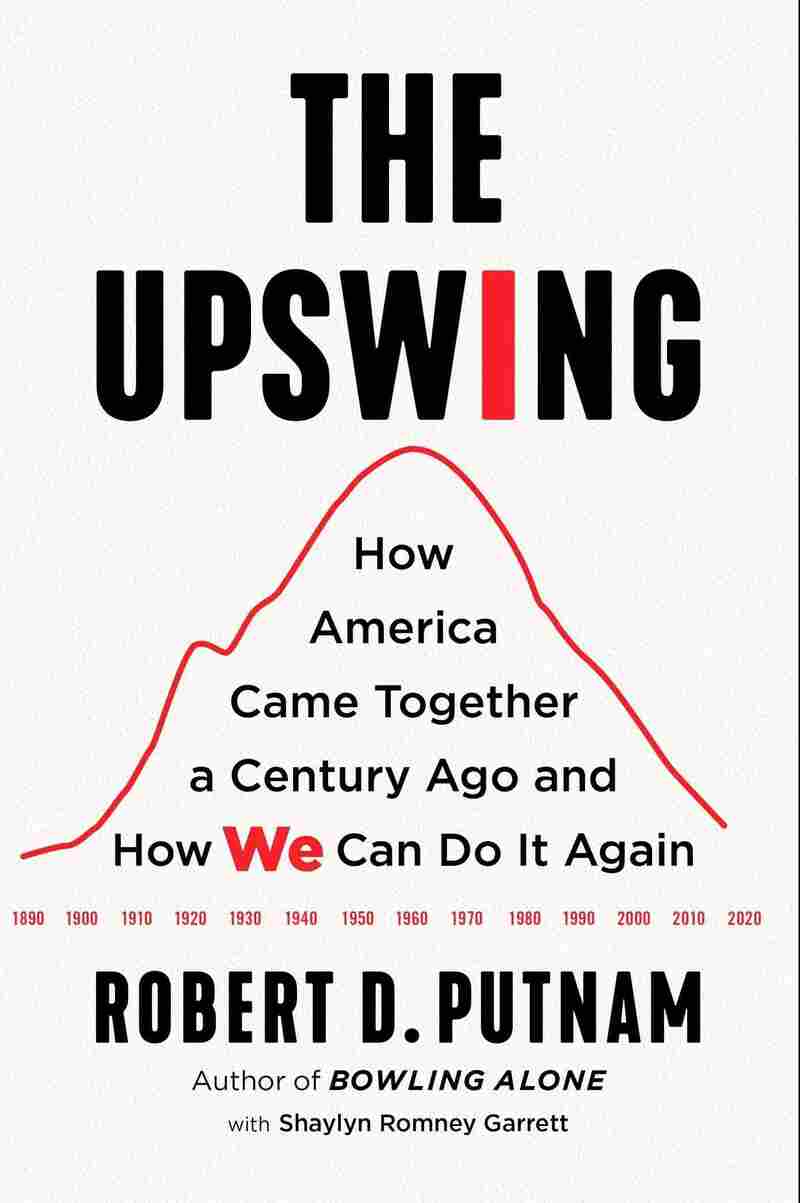 The Upswing: How America Came Together a Century Ago and How We Can Do It Again, by Robert R. Putnam and Shaylyn Romney Garrett Simon & Schuster hide caption 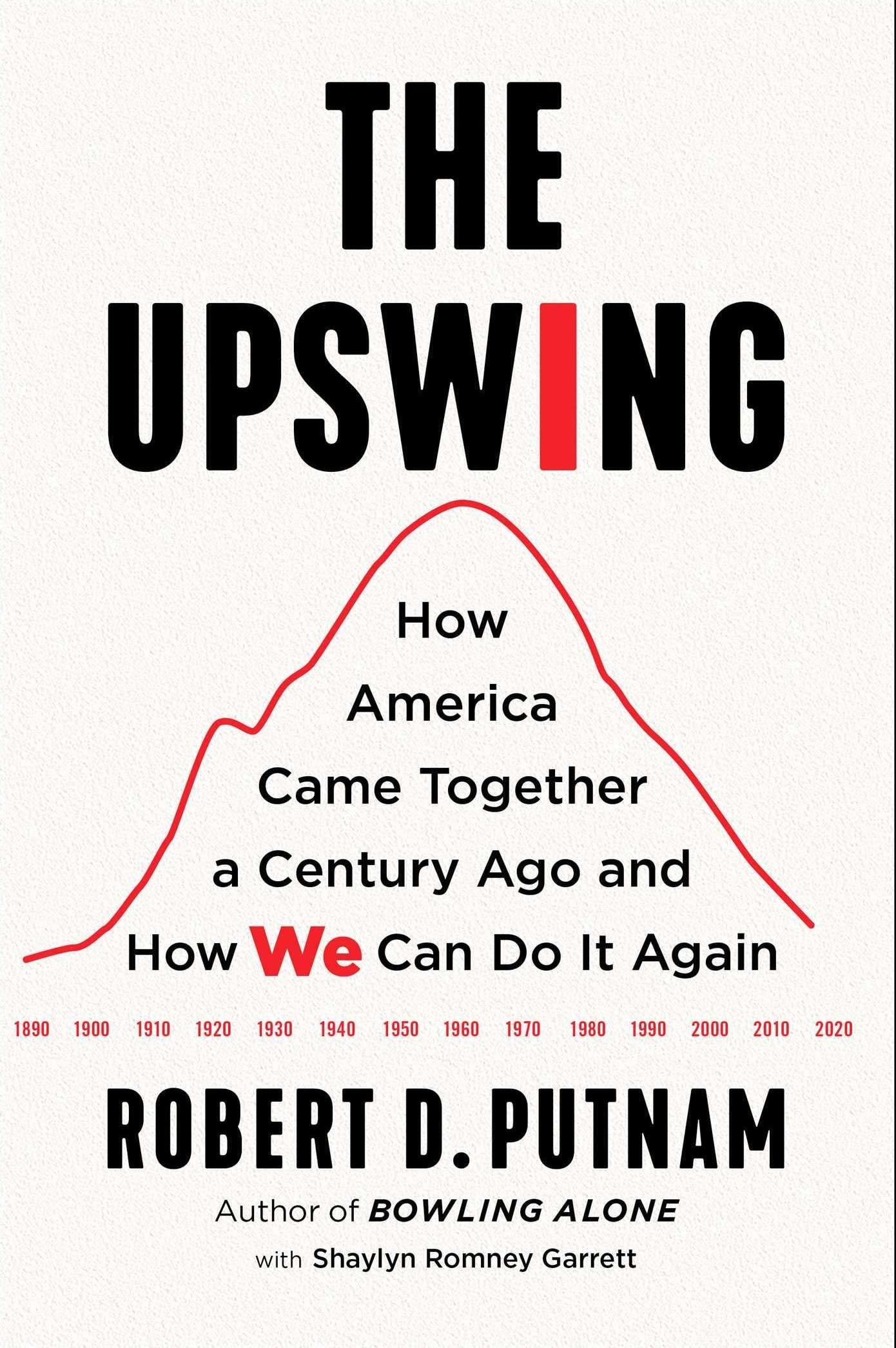 The Upswing: How America Came Together a Century Ago and How We Can Do It Again, by Robert R. Putnam and Shaylyn Romney Garrett

The Upswing, written by Robert D. Putnam in partnership with Shaylyn Romney Garrett, argues that history holds the answers for how to move out of today's tumultuous age.

Putnam is the Malkin Research Professor of Public Policy at Harvard University and author of 14 books. Garrett is a social entrepreneur, writer, and founding contributor to "Weave: The Social Fabric Project," an Aspen Institute initiative.

The Upswing follows Putnam's Our Kids, which decried narrowing social mobility for America's young people, and Bowling Alone, published in 2000, which became a bestseller. Sifting through evidence from nearly 500,000 interviews, Bowling Alone argued that Americans have become increasingly disconnected from one another. For this proposition, Putnam cited Americans' disintegrating participation in organizations such as bowling leagues, parent-teacher associations, and other volunteer groups that help weave together civil society.

The Upswing: How America Came Together a Century Ago and How We Can Do It Again takes a different tack. Beginning with a chapter called "What's Past is Prologue," The Upswing's thesis is that America's Gilded Age — 1870s through 1890s — shows remarkable similarity to our own, including a yawning gap between rich and poor, and a societal focus on "I" rather than "we." During the Gilded Age:

"Inequality, political polarization, social dislocation, and cultural narcissism prevailed — all accompanied, as they are now, by unprecedented technological advances, prosperity, and material well-being."

In other words, if we have righted our American ship before, we can right it again.

Putnam and Garrett plot a hill-shaped curve to reflect trends from the Gilded Age to the present. They see an "I-we-I" curve crosscutting these issues over the past 125 years. The height of the curve represents the lowest gap between rich and poor; most favorable health indicators; highest social spending to help the poor; lowest political polarization; and the apex of America's sense of moving forward together, as opposed to the toxic fractionalization of today. Roughly speaking, the height of the curve occurred mid-20th century and has headed downward ever since.

In a chapter on cultural change, the authors make use of "Ngram" data. As Google has digitized millions of books, scholars can now search the frequency of words to evaluate social trends. Putnam and Garrett searched American books post-1880 for terms like "survival of the fittest." That term faded through most of the 20th century, "only to win a new lease on life in the twenty-first century." The cultural salience of terms like "association," "cooperation," and "socialism" rose from 1880, peaked around 1970, and declined thereafter. Use of the term "common man" rose steadily from 1880 to a peak in the late 1940s and plunged sharply thereafter.

One can question the reliability of this kind of evaluation, but Ngrams are only one part of the authors' much larger analyses. No doubt, future writers and researchers will appreciate the nearly 100 pages of endnotes. The Upswing is saturated with data and charts, so much so that it can be difficult for a lay person to weigh and evaluate what is presented. This matters, because readers will be eager for guidance to move the curve toward a more connected, unified "we."

The authors divide the book into chapters that examine economic realities, politics, society, and culture. They also break out separate chapters on race and gender. Given how structural racism underlies everything from economic security to health and political participation, I would have preferred that race was a more intentional through line, rather than a stand-alone chapter. As the authors note, "Renewed party polarization of the last half century began with race — the one constant and central conflict in American history...."

I had similar feelings about addressing gender in a stand-alone chapter. After all, half the American population did not have voting rights until the 20th century, and grossly lagged on economic rights. To be fair, Putnam and Garrett do mention race and gender in other chapters. But I couldn't help wondering how their interpretation of data might have changed with more deliberate inclusion of non-white, non-male theorists throughout.

Most of all, I longed for clear, prescriptive solutions for a better, more inclusive future. In a final chapter called "Drift and Mastery," the authors review hallmarks of the Progressive Era (roughly 1890s to 1920s) to tease out ideas for today. They highlight the importance of leaders with a strong moral compass, heavy youth participation, and a "groundswell" of agitation along with an insistence on political action. They caution against overreach, such as Prohibition, an unfortunate overcorrection "into social control by well-meaning reformers who sought to protect women, children, and the poor."