Accessibility links
In Puerto Rico, Young Voters Are Trying To Shake Up Traditional Party Politics Politicians have spent decades fighting over statehood but many young voters think it's time to focus on rebuilding a decimated island instead. 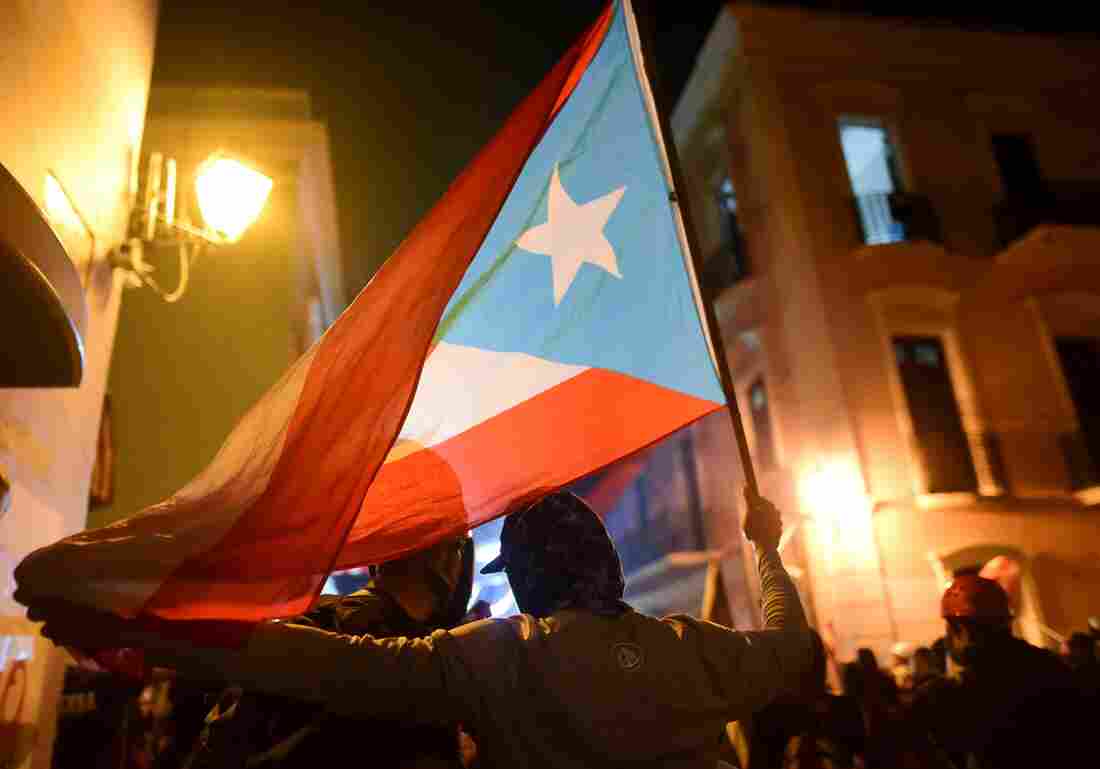 After years of social and economic turmoil, young Puerto Ricans see this year's election for governor as a chance to plot a better future for the island. Many who participated in last year's protests forcing the then-governor to resign are voting for the first time in Tuesday's election. Carlos Giusti/AP hide caption 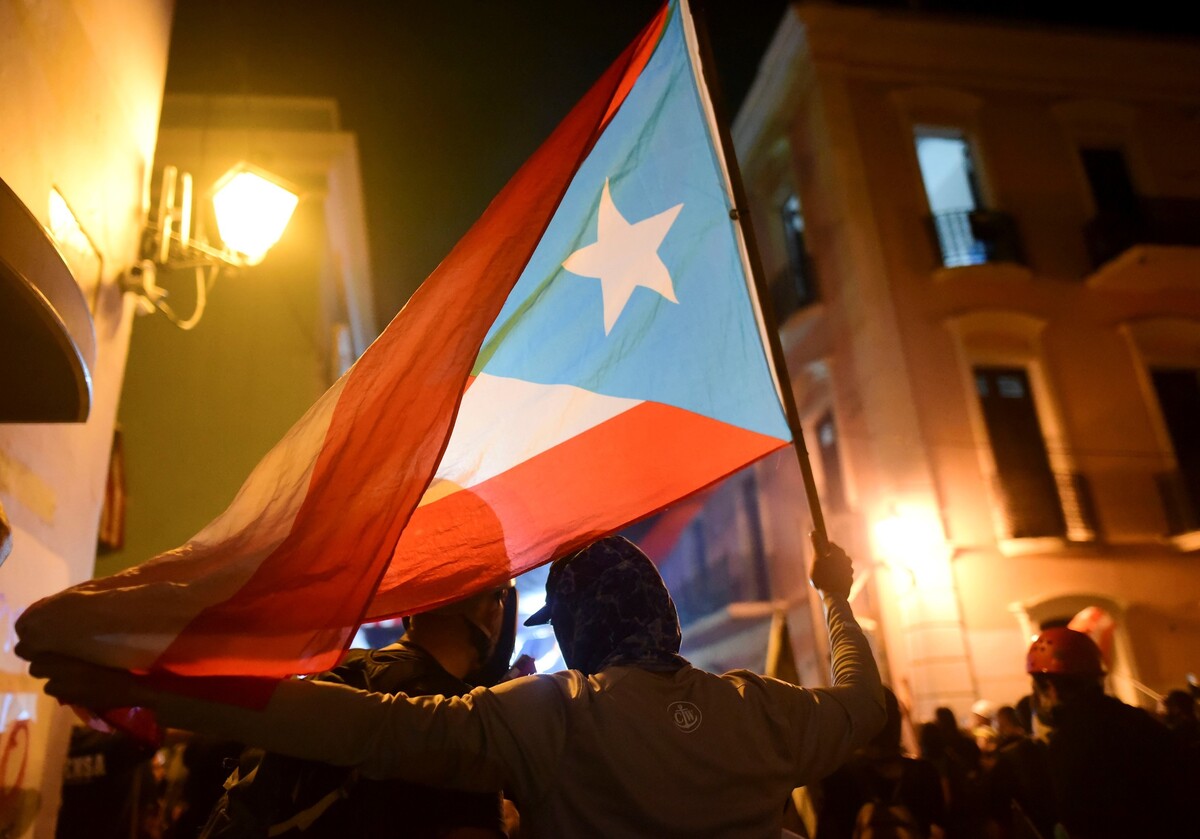 After years of social and economic turmoil, young Puerto Ricans see this year's election for governor as a chance to plot a better future for the island. Many who participated in last year's protests forcing the then-governor to resign are voting for the first time in Tuesday's election.

Alondra Llompart was 8 years old when Puerto Rico entered the economic recession from which it is still struggling to emerge. She's 22 now, so for most of her life she's watched the island's infrastructure crumble and endured an unending string of goodbyes to people leaving the island in search of work.

"Most of my family, unfortunately — to Florida, or Texas," Llompart said. "So you're just kind of trying to hold on to the few people that do stay, and hope that they never leave. And it just is really sad."

The sources of Puerto Rico's economic and social troubles are many, but prominent among them, Llompart believes, is a system in which the island's two main political parties have spent decades fighting over one major issue – whether Puerto Rico should remain a commonwealth territory of the United States, or seek statehood.

"We haven't become a state in all these decades," she said. "We have to solve our own problems first before we can do something bigger."

When she goes to the polls to vote for a new governor on Tuesday, Llompart said she'll vote for neither Pedro Pierluisi, the candidate for the pro-statehood New Progressive Party, nor for Carlos Delgado from the pro-commonwealth Popular Democratic Party.

'There is a possibility for change'

Though one of those two men is widely expected to win, Llompart is part of a growing tide of young Puerto Ricans eschewing the island's two dominant parties in favor of alternative candidates trying to loosen the grip those parties have had on power since the U.S. allowed Puerto Ricans to elect their own leaders seven decades ago.

Llompart said she'll split her ballot. For governor, she's supporting the candidate who supports Puerto Rico's independence from the United States, and for downticket offices she'll support candidates from a new party, Movimiento Victoria Ciudadana — or Citizens' Victory Movement — that's emerging as the first substantial challenge in decades to the island's two-party system.

Victoria Ciudadana's gubernatorial candidate, Alexandra Lúgaro, has appealed to voters by doing something unprecedented in Puerto Rico's modern political history: deprioritizing the statehood question in favor of a platform focused on rebuilding a Puerto Rico in which young people like Llompart can envision a future for themselves.

"Everyone sees this open window, this possibility," Llompart said. "I'm not sure if whoever I vote for will win or not, but I do know that this election is going to show that there is a possibility for change, because we are in a moment of crisis."

Though polling indicates that one of the two traditional party candidates will win, the numbers also suggest it could be with support from less than 40% of the electorate, the smallest vote share ever to propel a Puerto Rican governor to office. That's in large part due to growing enthusiasm among young people for the candidates offering a new political vision for the island.

"This younger generation, we are the children of the crisis," said Jonathan Lebrón Ayala, a journalist and co-host of Puestos pa'l Problema, a podcast about Puerto Rican politics.

The island's youngest voters have come of age during a recession that has driven an exodus of half-a-million people — largely young adults — to the mainland United States. The past four years alone have arguably been the most tumultuous in Puerto Rico's modern history. It has declared bankruptcy, lost control of its own finances to a federal board appointed to resolve its debt, faced massive cuts to education and pensions, muddled through the recovery from two major hurricanes, faced earthquakes, corruption scandals, and a pandemic.

"We're exhausted," Lebrón said. That exhaustion fueled the anger behind last year's youthful protest movement that forced the then-governor to resign. Lebrón said it's that same energy driving the unprecedented political realignment that appears to be taking hold this year, as more voters demand a move away from the two-party system they believe has prioritized the statehood question while sidelining the needs of everyday Puerto Ricans.

"We are going to see a major change," Lebrón said. "Not in this election, but maybe in 2024, or 2028, because the numbers in the younger demographic with these two old parties are very, very weak."

'A lot of things are falling apart'

The magnitude of those future changes will depend on how well the youthful new party trying to disrupt the status-quo performs on Tuesday. Alexandra Lúgaro, the Citizens' Victory gubernatorial candidate – is considered a longshot to win, but if candidates from her party earn seats in the legislature or at the municipal level, it could build momentum that carries the party to stronger showings in future elections.

Making its task more difficult is that many of the voters inclined to support the Citizens Victory Movement feel an allegiance to Puerto Rico's traditional pro-independence party, which is fielding its own candidate, Juan Dalmau. Both parties' candidates are polling around 10 to 12%, and have similar policy priorities, though the pro-independence party has historically made the island's independence from the United States a central tenet of its platform. The new Citizens' Victory Movement, on the other hand, wants the island's colonial relationship to be resolved eventually, but not as an immediate priority.

Tuesday's election will also include a non-binding referendum asking Puerto Ricans whether they support statehood, and two additional minor candidates for the governorship.

On the question of which of the alternative candidates he'll support, Omar DeLeón is one of the young Puerto Ricans who feels torn. He and his family have always supported independence, and he is a fan of the pro-independence candidate this year.

But he said he also recognizes that conservative forces on the island have long demonized the island's independence movement, turning many Puerto Ricans against it. DeLeón believes Victoria Ciudadana has a better chance of siphoning support away from the traditional pro- and anti-statehood parties that he feels have driven Puerto Rico's economy into the ground.

"A lot of things are falling apart, and it's visible everywhere," he said. "Nothing works."

DeLeón, a 23-year-old chemistry student at the University of Puerto Rico, said he did not vote during the 2016 election because he was frustrated with his choices. But the last four years of tumult, and the rise of a new political party, have changed his mind this year.

"There are more options, so that's kind of my motivation," he said. "There might be a chance to change things."