Accessibility links
Post-Election Violence: Cities And Businesses Prepare For Unrest Across the country, there are growing concerns that the bitterness and animosity over the presidential election will not end when the polls close. 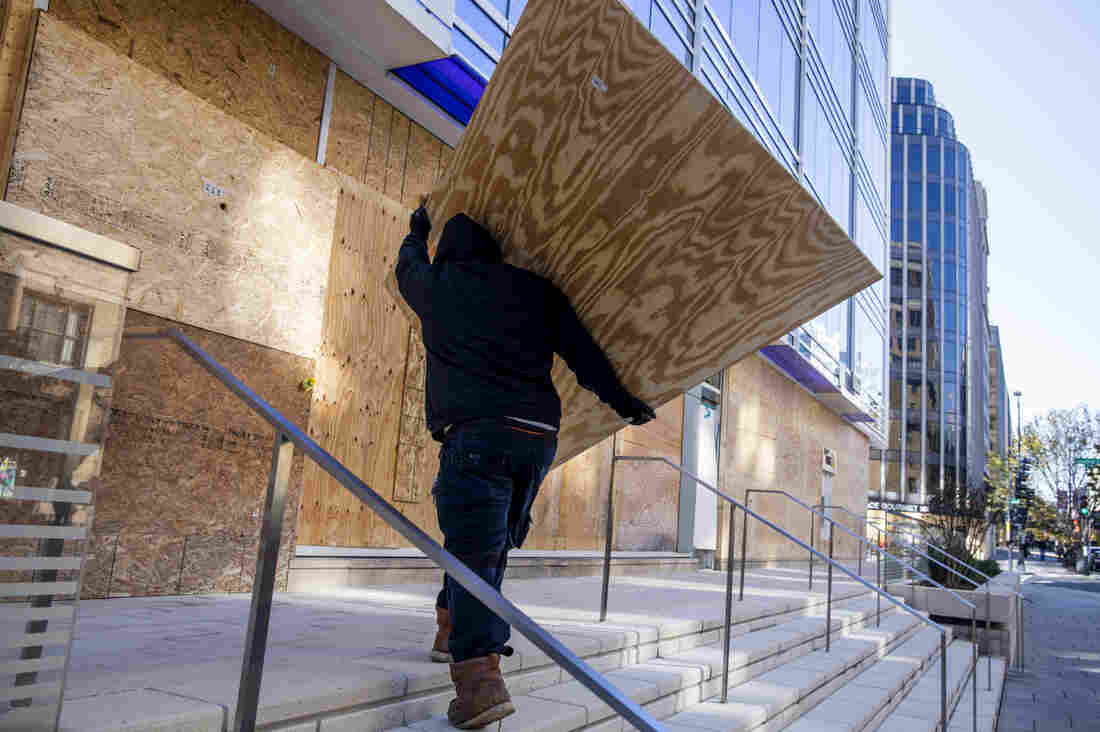 Workers board up a building in downtown Washington, D.C., in preparation for possible protests. Tyrone Turner/WAMU hide caption 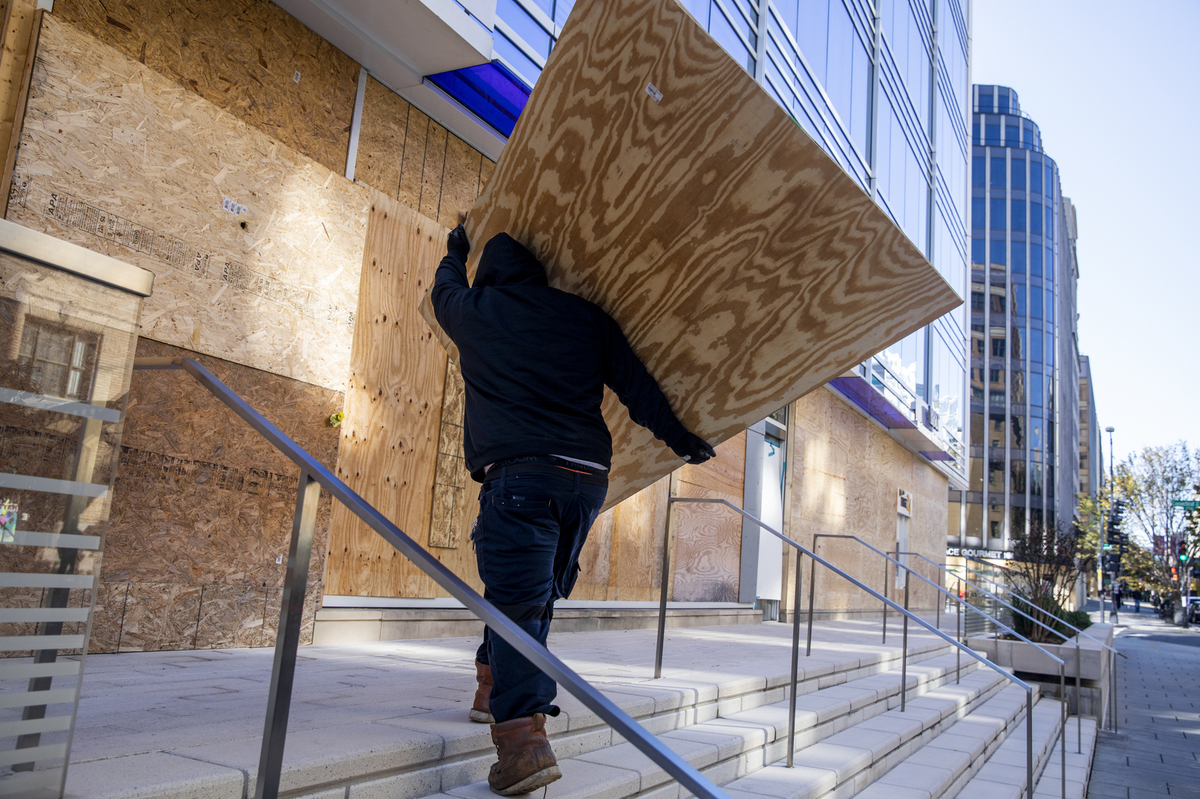 Workers board up a building in downtown Washington, D.C., in preparation for possible protests.

Phil Brach spent the weekend putting huge sheets of plywood up over the massive glass windows of the Washington, D.C., store where he works, Rodman's Food and Drug, in preparation for Election Day.

Across the country, there are growing concerns that the bitterness and animosity over the presidential election will not end when the polls close Tuesday night. From coast to coast, cities are preparing for possible protests, civil unrest and violence regardless of the election's outcome.

Brach is working alongside his boss, Nolan Rodman, the third generation of his family to run the store that his grandfather first opened in 1955 as a pharmacy. It now includes a cafe, produce, beer, wine and food items from around the world.

On May 31, Rodman says he was caught unprepared when rioters broke in and looted his business during the height of protests over the police killing of George Floyd in Minneapolis that sparked demonstrations nationwide.

"They threw a chair through our window; there was chaos happening everywhere," Rodman says. "I was very scared that night. It was pretty horrifying."

After Rodman's was ransacked, Nolan Rodman says he couldn't sleep for a week. 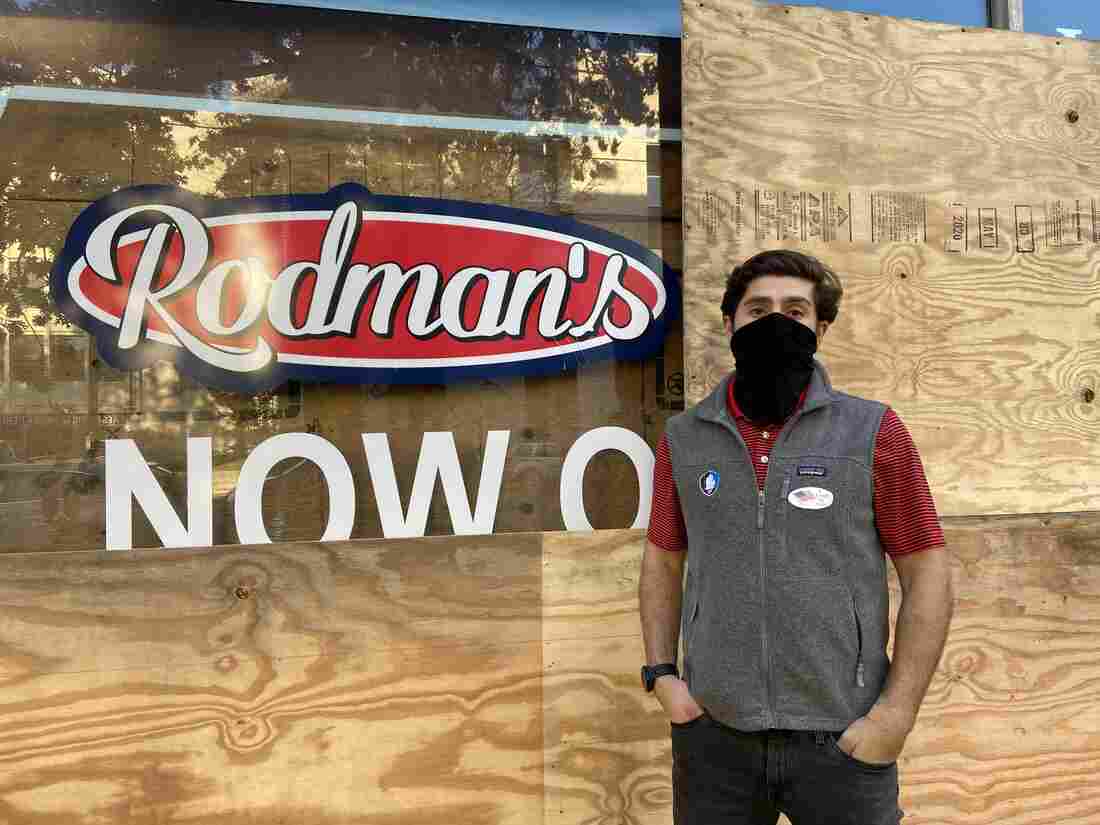 Nolan Rodman stands in front of the boarded-up Rodman's Food and Drug in Washington. Cities across the country are preparing for possible protests, civil unrest and violence regardless of the election's outcome. Marisa Peñaloza/NPR hide caption 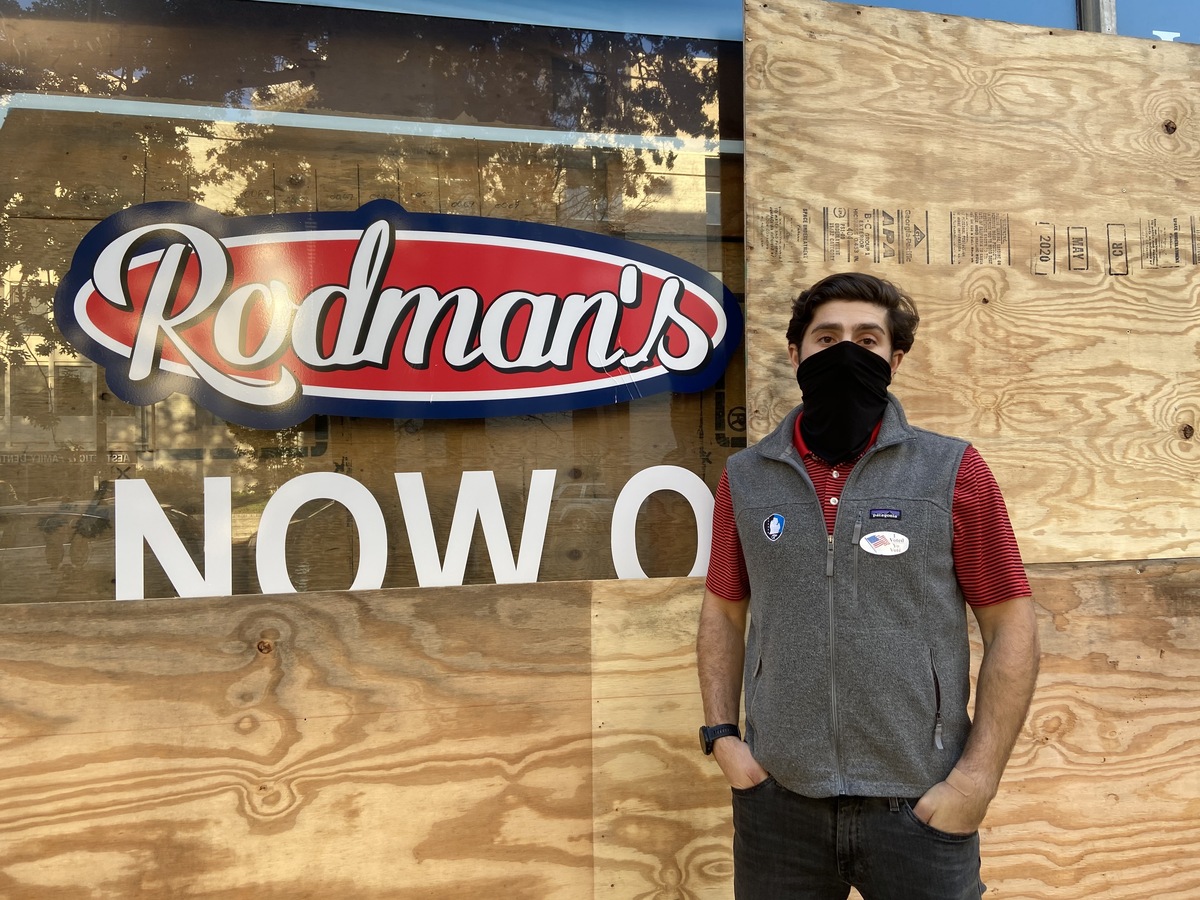 Nolan Rodman stands in front of the boarded-up Rodman's Food and Drug in Washington. Cities across the country are preparing for possible protests, civil unrest and violence regardless of the election's outcome.

This time around they have a plan

Rodman says he went to the store the night of the looting along with a police officer who advised him to leave. Security cameras caught mostly young men going into the pharmacy and the beer and wine section of the store. He and his father, Roy Rodman, even stayed in the store a few nights.

The elder Rodman says this time around they have a plan.

"We put some film on these windows so that they're not easily broken; if they're smashed, they'll stay in place. And we're hoping that no one can break into the store, at least not easily," Roy Rodman says. His son adds, "The film makes the glass shatterproof so it doesn't just explode upon contact."

While the nation's capital is certain to be a focal point of post-election demonstrations, other cities are bracing for possible chaos, too.

The National Retail Federation has held training webinars for members on crisis prevention and the de-escalation of conflict and has hired security consultants to help store owners prepare.

Many storefront windows along Chicago's Michigan Avenue are already boarded up – as some retailers there have been looted this summer, not just once but twice.

Richardson says it's not just the high-end retailers on the Magnificent Mile downtown that are at risk, but also the mom and pop shops on the South and the West sides of Chicago, which he says "are hanging on by a thread right now because of the pandemic." 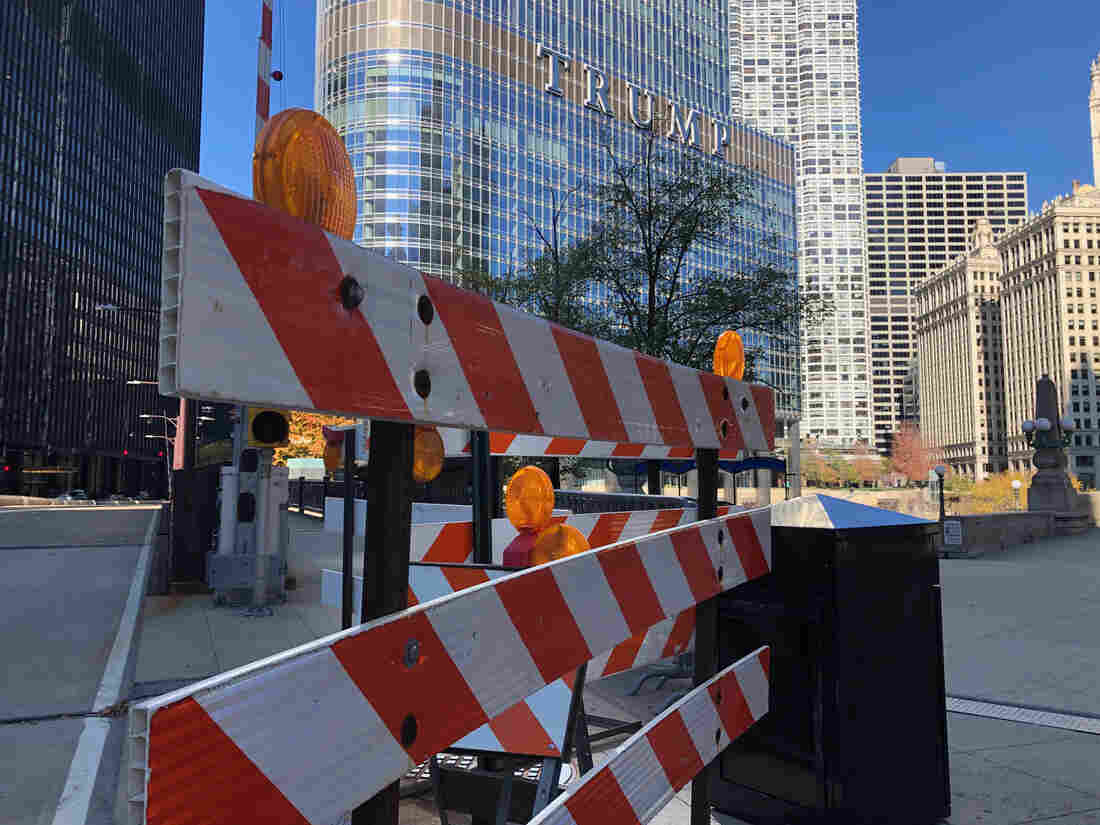 The city of Chicago has barricades ready to try to keep protesters away from Trump Tower if necessary. David Schaper/NPR hide caption 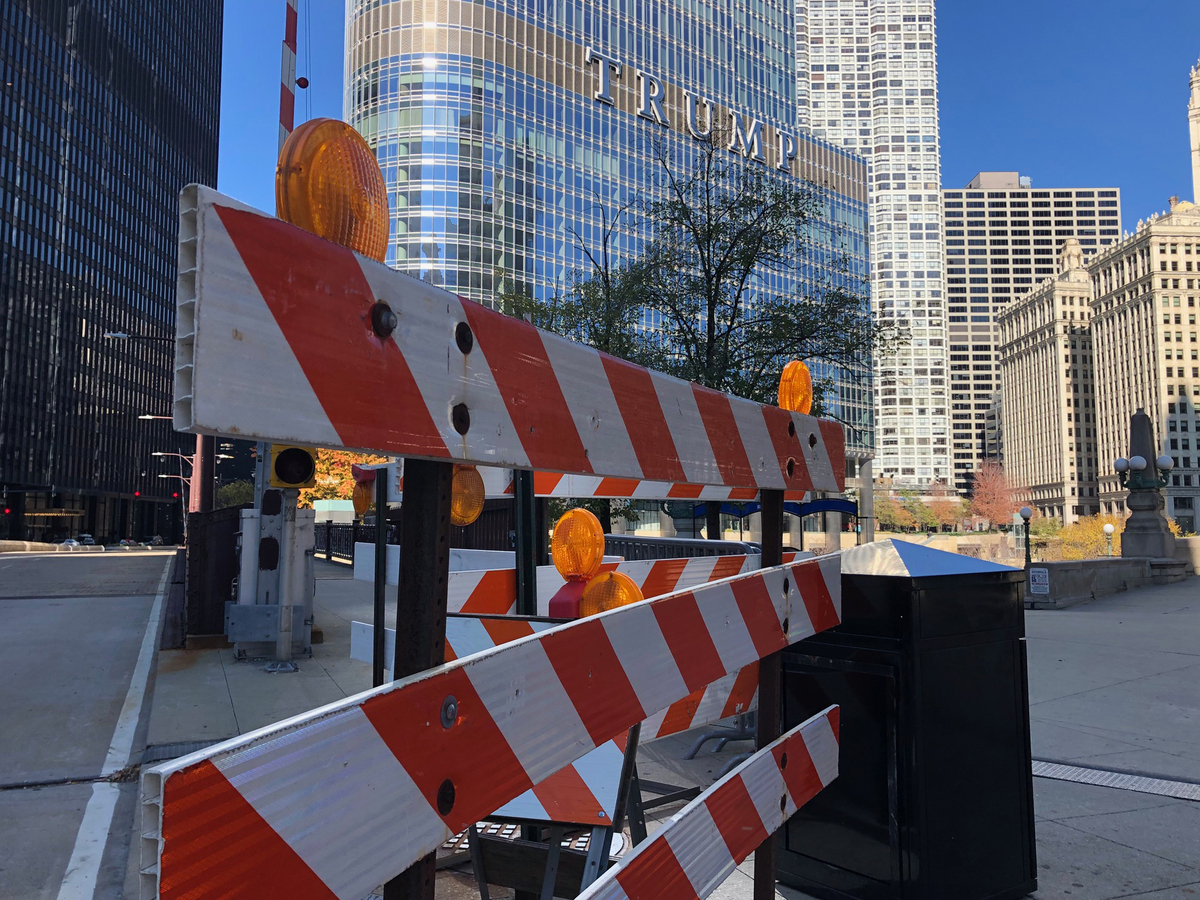 The city of Chicago has barricades ready to try to keep protesters away from Trump Tower if necessary.

"Channel those emotions into peaceful and productive expressions"

Chicago Mayor Lori Lightfoot says the city has been planning and preparing for potential election-related protests and civil unrest for months.

"We all know that emotions will be high because they already are," the mayor says, "and I urge you to channel those emotions into peaceful and productive expressions."

Like other cities, Chicago has been running tabletop exercises and gaming out how, when and where violence might erupt. Days off for police officers are canceled, and the city will flood certain areas with a highly visible police presence to deter violence. The city will also be using snowplows, dump trucks and other heavy vehicles to block certain streets and expressway exit ramps to keep demonstrators away.

Police Superintendent David Brown says Chicago police will respect people's rights to protest peacefully and will work first and foremost to de-escalate any confrontations, but he adds that his officers will take swift action against anyone intent on spreading chaos.

"The message is, don't loot in Chicago. If you do loot, you will be held accountable. If you escape, we will find you and bring you to justice," says Brown, with a seriousness in his voice. 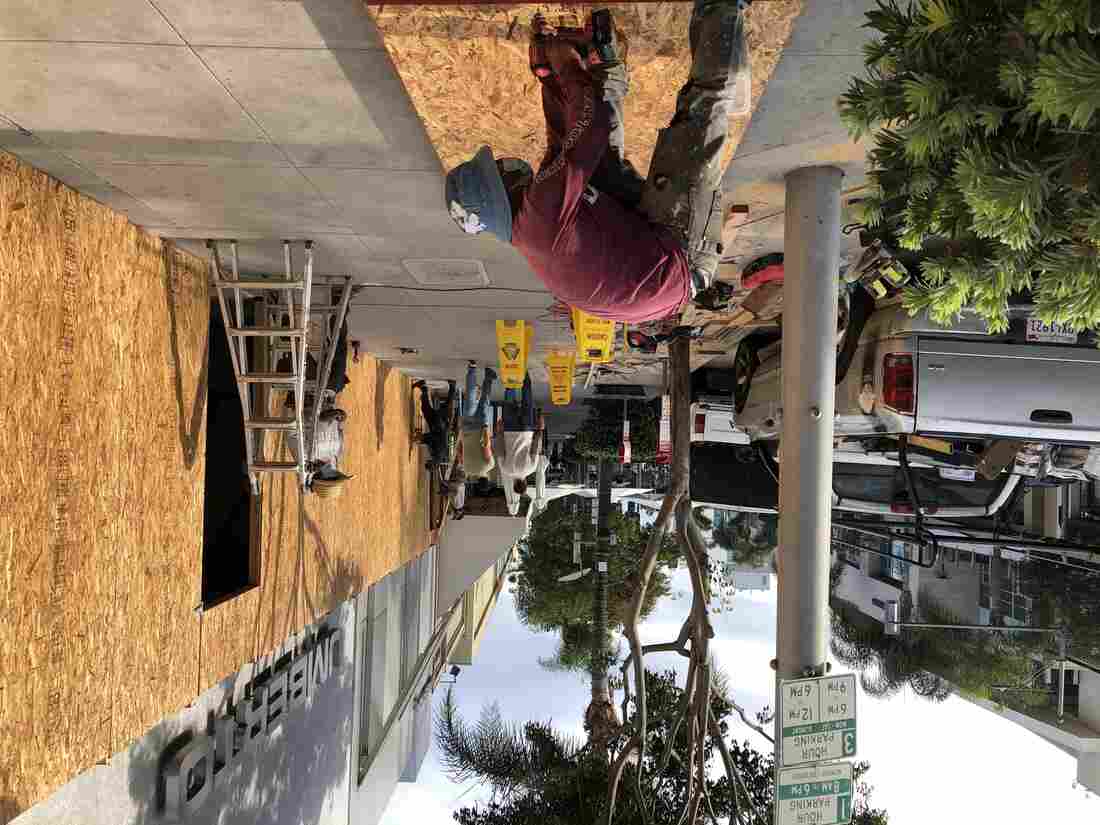 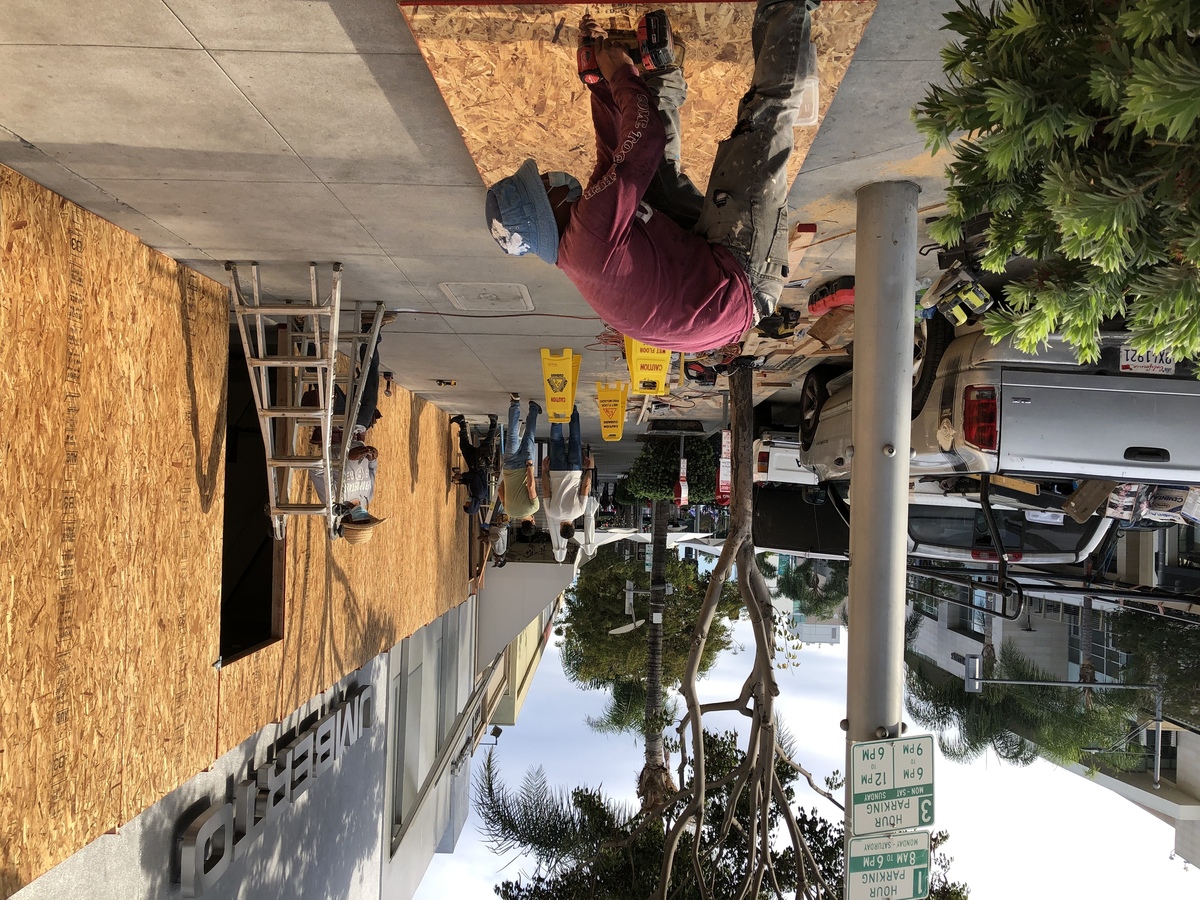 Workers board up a business last weekend in Beverly Hills, Calif.

Workers were busy boarding up store windows while supporters of President Trump held a "freedom rally" briefly disrupted by counterprotesters.

Police are planning to shut down Rodeo Drive on Tuesday and Wednesday, but one small business owner who is not boarding up is Steve White, a 47-year-old Army veteran who attended the rally wearing fatigues and a Kevlar vest.

"I've been buying weapons and guns ever since the first riots hit, so I'm definitely prepared for it," White says.

He owns a business on Wilshire Boulevard. "I'm worried about it, but I'm just going to camp out there every night and defend my own business." 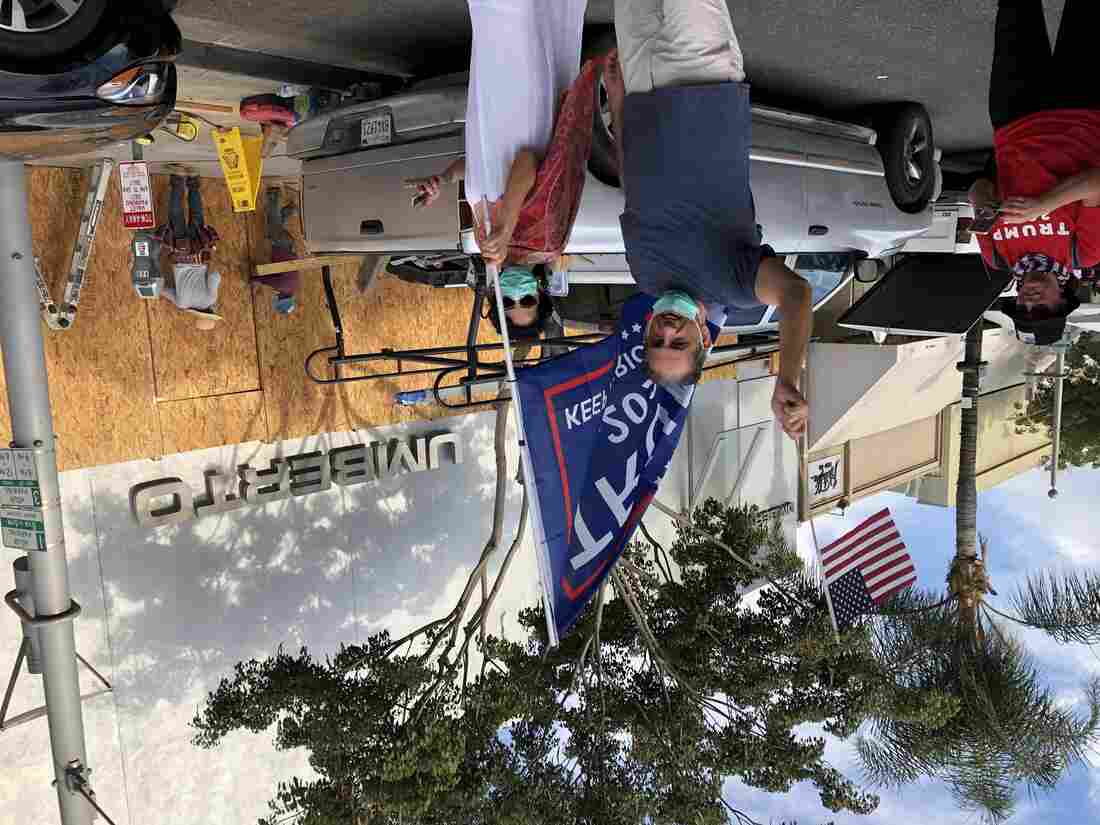 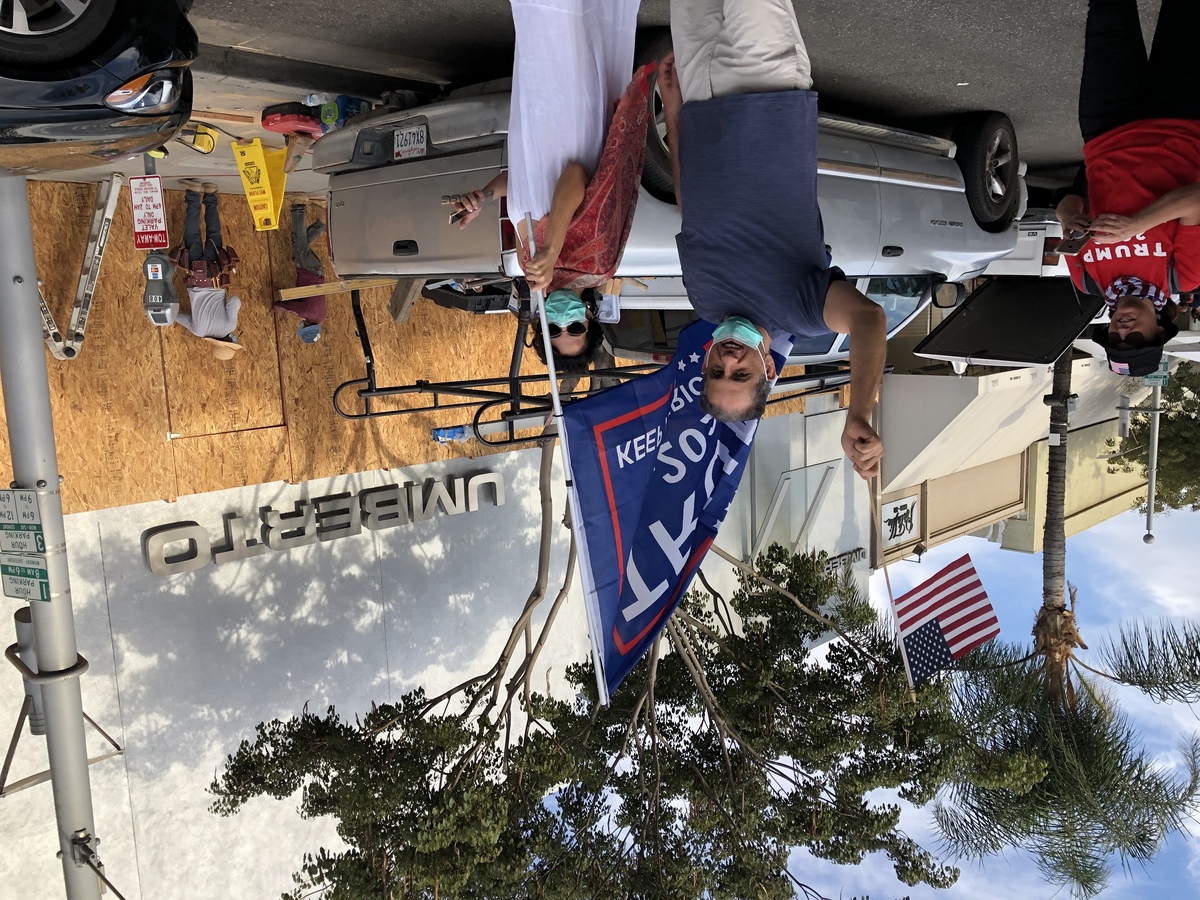 Trump supporters march in front of a boarded-up business in Beverly Hills.

Groups on all sides of the political spectrum are planning election night demonstrations, and the possibility that results might not be known for days or weeks after Election Day could escalate tensions.

"We just don't do this in this country. We have lone wolves. We can have some rioting," he says, "but in terms of actual massive violence, this is not something we have done before."

That said, 2020 is already a year of political tension and unrest unlike anything seen in the country since the 1960s, and the only certainty seems to be how difficult it is to predict what may happen next.