Accessibility links
A Guide To Election Night 2020: When Will We Know Who Won? You're probably anxious about the results, but patience may truly be a virtue on election night. Here's how to approach the evening. 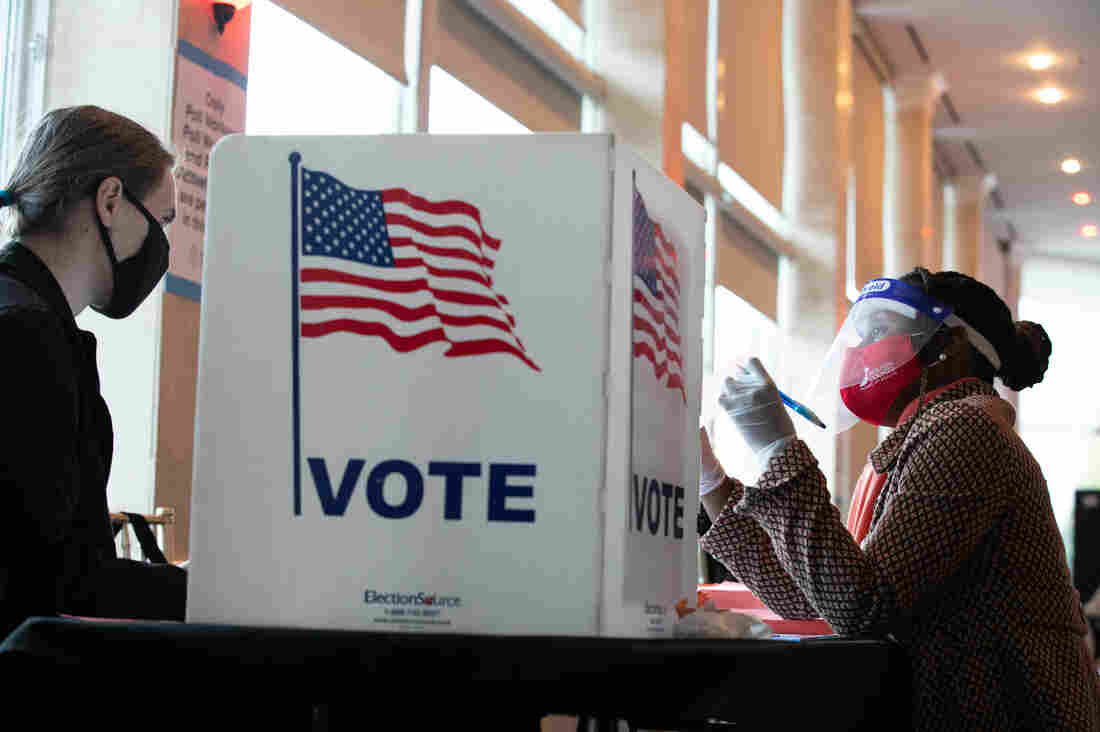 A poll worker helps K. Maki (left) fill out a provisional ballot at Park Tavern polling station on Tuesday in Atlanta, Ga. After a record-breaking early voting turnout, Americans head to the polls on the last day to cast their vote. Jessica McGowan/Getty Images hide caption

You're probably anxious about the results, but patience may truly be a virtue on election night.

Followers of NPR's elections coverage should have read or heard this at least a few times by now: We may not know who wins the presidential election (or any number of other down-ballot races) on Tuesday night or early Wednesday, and that's OK.

State results are not final on election night; instead, organizations like The Associated Press — which NPR relies on for race calls — determine most winners well before local officials tabulate all votes.

But this year we're expecting slower counts, and the reason is straightforward: In response to the coronavirus pandemic, many states modified their voting rules, broadening access to mail-in voting and accelerating what had already been a rising mail-in voting trend.

And mailed-in ballots — with envelopes to open and signatures to check — simply take longer to tabulate than in-person votes. 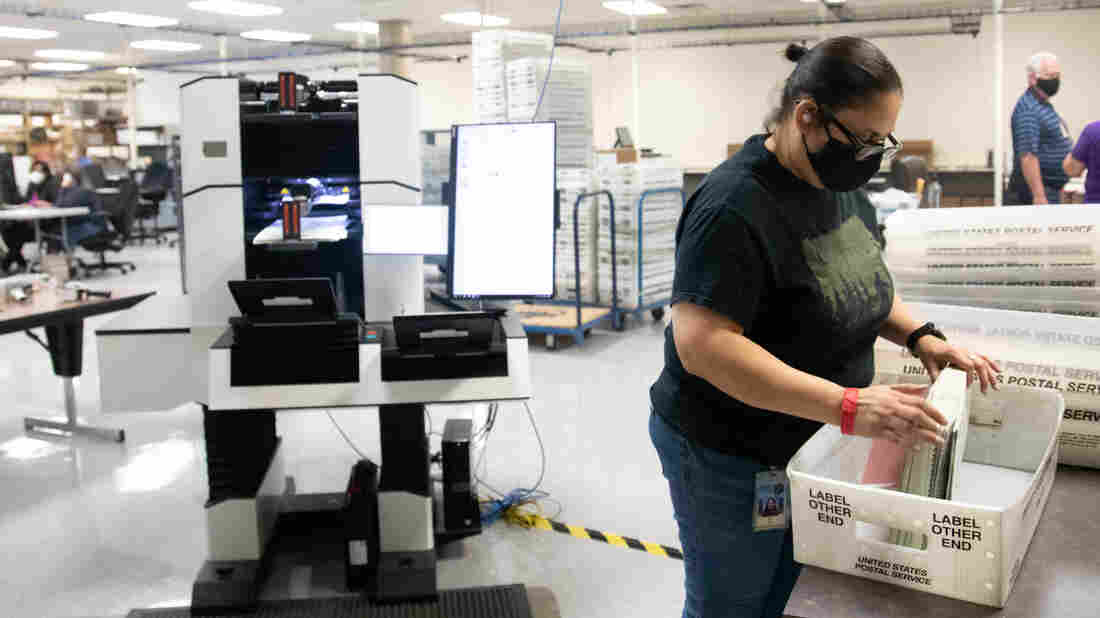 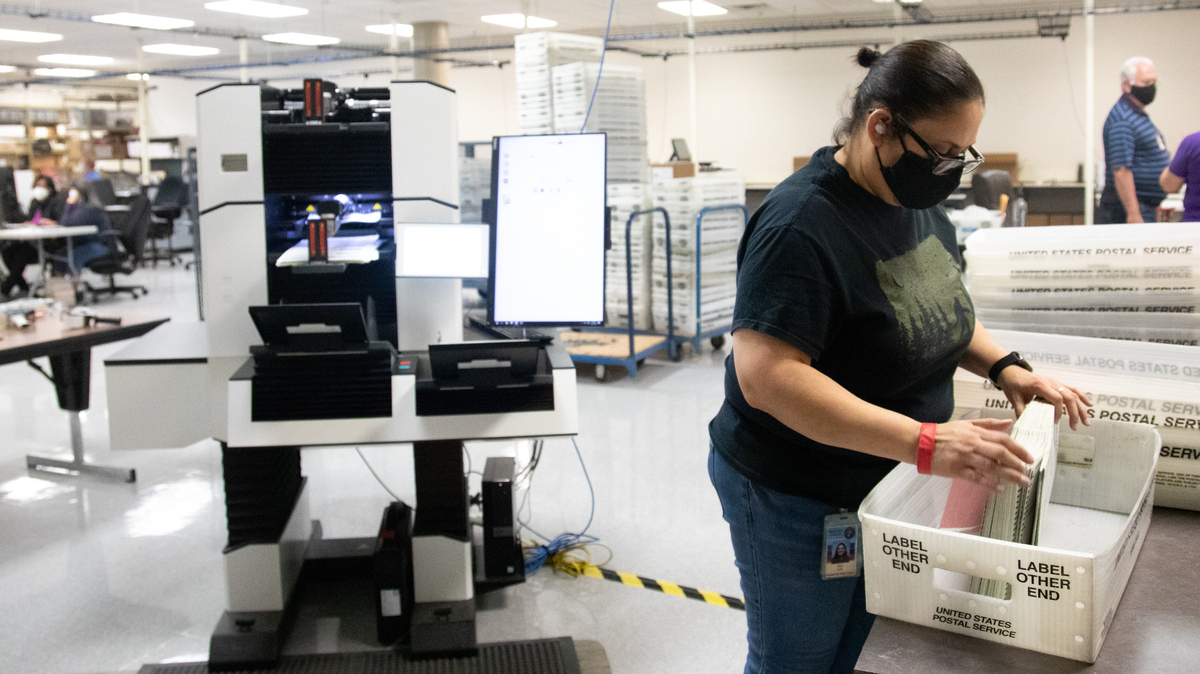 Some individual state rules play key roles too. Take two swing-state examples: Florida allows counties to process ballots well ahead of Election Day, while officials in Pennsylvania have to wait until the morning of Election Day to begin that work.

Similar restrictive rules on ballot processing are in place in Wisconsin and Michigan as well. And, of course, these states may play a crucial role in deciding who wins the presidency. In fact, likely slow-counting Pennsylvania is considered by forecasters the most likely state to put Democratic nominee Joe Biden or President Trump over the election-capturing 270-electoral-vote threshold.

Now add in another element: Poll after poll has shown that Democratic voters said they were far more likely than Republicans this election to use mail-in ballots. GOP voters' preference for in-person voting is likely due at least in part to Trump's unfounded claims of widespread fraud associated with mail-in ballots.

This may not be a small shift, either.

An analysis by FiveThirtyEight estimates that Pennsylvania could see a 21-point shift in the overall margin, from 3 a.m. ET Wednesday to the final result.

Understanding these potentially misleading shifts may give you a better grasp on election night, as it unfolds. With that out of the way, let's look hour by hour:

Top states/races to watch: Georgia highlights the first batch of states. It's a presidential toss-up, and it has not one but two contested U.S. Senate races. Georgia has already begun processing its mail-in ballots, which should expedite results and give us an early glimpse about the course of the evening.

But — now talk about patience — both Senate contests could go to January runoffs if no candidate gets a majority of a race's vote. The Senate balance of power could indeed be decided in 2021.

Also keep an eye on South Carolina, where Republican incumbent Sen. Lindsey Graham is in a tight contest with Democrat and record-fundraiser Jaime Harrison.

Top states/races to watch: Hello, North Carolina. The state will likely have tight races for president, U.S. Senate and governor. Democrats hold narrow leads in the polling averages for all three contests, giving the party one of its prime opportunities to flip a Senate seat — in addition to potentially giving Biden a big boost. The state is also likely to count relatively quickly with most results — advance votes — expected shortly after polls close on election night.

Ohio is a presidential toss-up state as well, but it's thought to be a safer bet than some others to stay in Trump's column.

Top states/races to watch: Now we're really into the heart of the night.

Pennsylvania, as we detailed above, is key for the presidential race but likely slow to count. So Florida will be the most important state here. Most of the state's polls actually close at 7 p.m. ET, and all early votes and mail ballots tabulated in advance are supposed to be released starting around 7:30 p.m. But remember, those advance votes might not be where the race ultimately ends up.

Maine is also notable for two reasons. One, it doles out two of its four electoral votes by congressional district, and the northern 2nd district is competitive. And two, the state has a toss-up Senate race, as Republican Sen. Susan Collins faces a tough reelection challenge. Ranked-choice voting could determine the winner.

Alabama's Senate seat is also one to watch, as Republicans are expected to oust Democratic Sen. Doug Jones in the conservative state.

Top states/races to watch: Fourteen states — accounting for the majority of electoral votes — have final polls that close at 9 p.m. ET. Five of those states are considered competitive in the presidential race, along with Nebraska's 2nd Congressional District.

Texas, which saw record early voting, is the big presidential prize. The longtime Republican stronghold has been trending more purple, but a Biden win there would be a massive development. The state is expected to count relatively quickly too.

Other presidential states to watch are Arizona, Michigan, Minnesota and Wisconsin. Of note: In Arizona, mail votes can be processed and counted well ahead of time, so that should expedite many results; but in Michigan, lots of places could only begin processing absentee ballots the day before Election Day, while Wisconsin can't begin its processing work until Election Day itself.

Another note on key Texas and Michigan: They're two of the states that stretch across two time zones, so while final polls close at 9 p.m. ET, most close at 8 p.m. ET.

These 9 p.m. states also include several key Senate races, including an open seat in Kansas and competitive races in Arizona, Colorado, Michigan and Texas. Arizona and Colorado are considered two of Democrats' best pickup opportunities.

Top states/races to watch: Iowa is the main event here with toss-up races for president, U.S. Senate and two for the U.S. House. Trump won Iowa by nearly 10 percentage points in 2016, so a loss or even slim win there for him this year could portend a tough go across the northern swing states.

Nevada is also a closely contested presidential state, while the marquee matchup in Montana is for U.S. Senate, as Democratic Gov. Steve Bullock tries to knock off GOP Sen. Steve Daines in the conservative state. The race to replace Bullock for governor is also considered a toss-up.

All House ratings are from the nonpartisan Cook Political Report. With research and reporting help by NPR's Arnie Seipel and Elena Moore.