Accessibility links
U.S. Leaving Paris Climate Agreement The United States is the only country to back out of its promises to reduce greenhouse gas emissions. America has contributed more cumulative carbon dioxide to the atmosphere than any other nation. 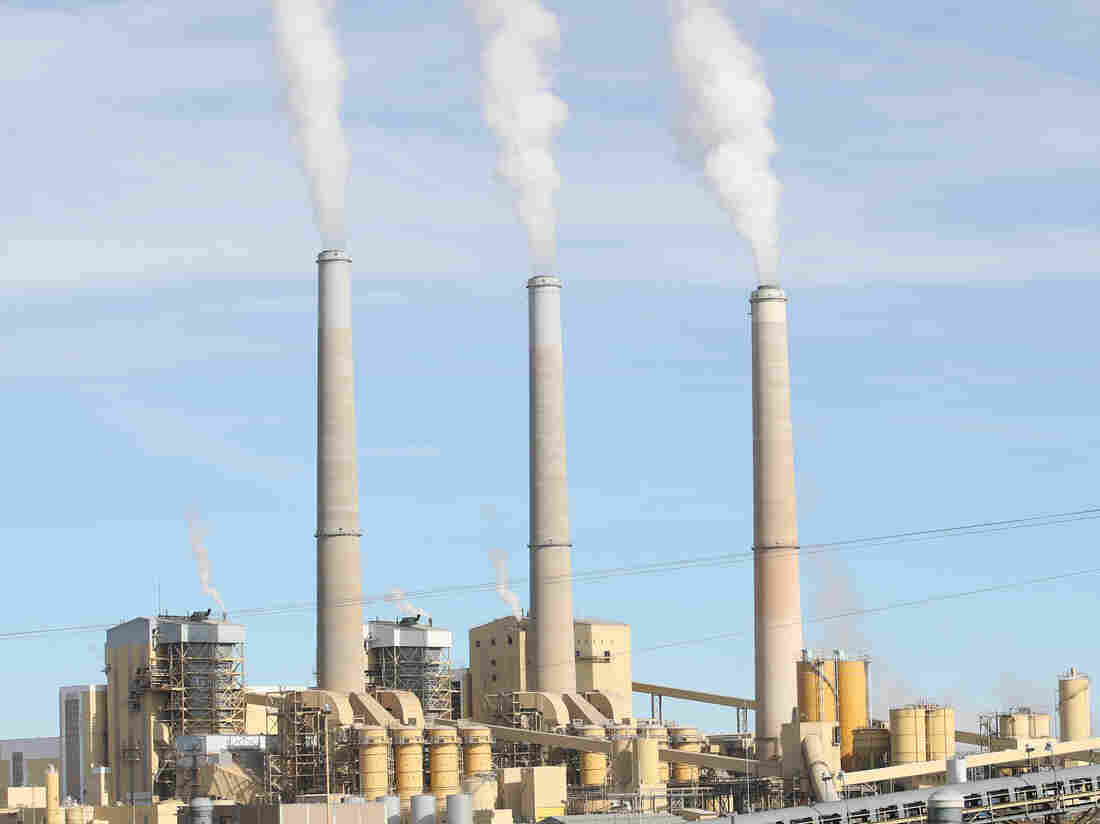 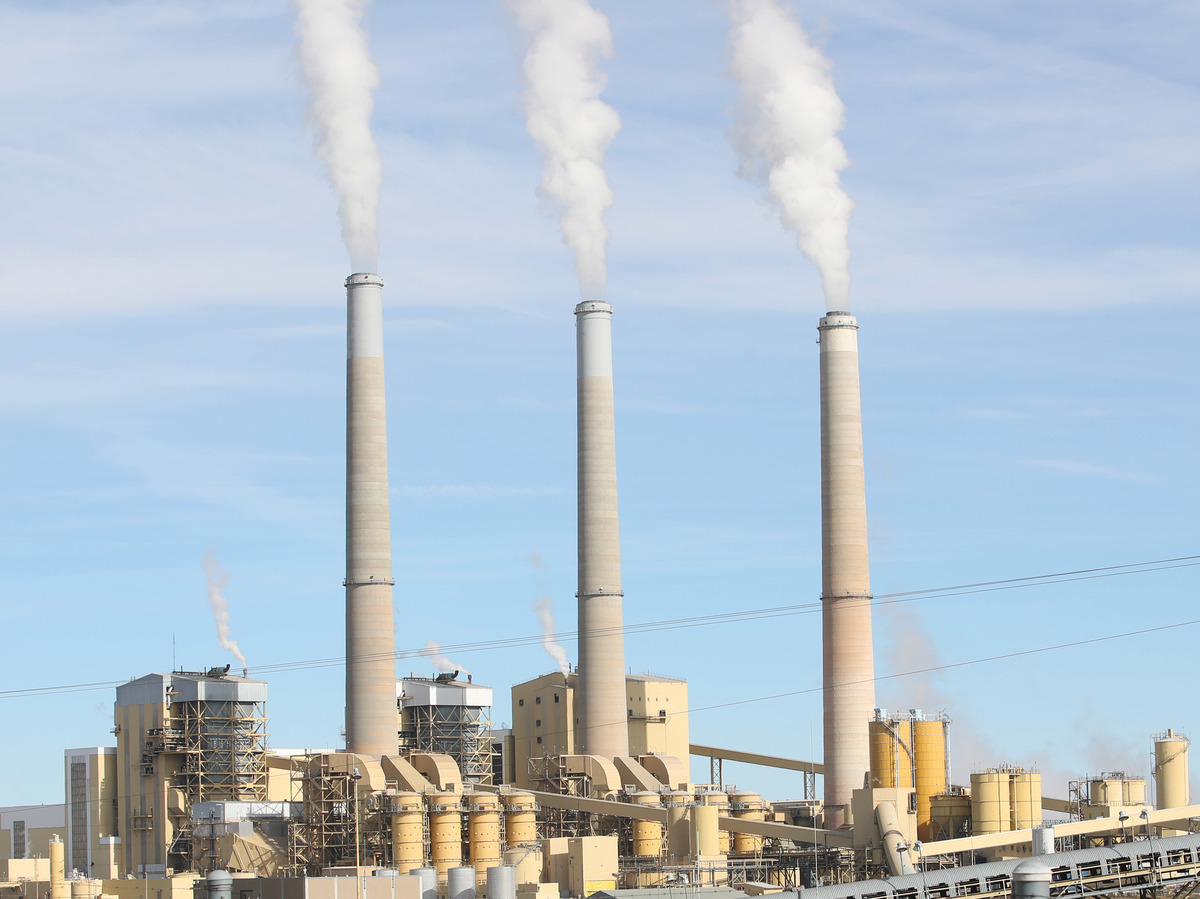 The Hunter power plant in Utah generates electricity by burning coal. Coal combustion releases enormous amounts of carbon into the atmosphere. The Utah plant is scheduled to keep operating until 2042.

The United States will formally leave the Paris Agreement on Wednesday, no matter who wins the election. Of the nearly 200 nations that signed the agreement, the U.S. is the only one to walk away from its promises to reduce greenhouse gas emissions.

President Trump originally announced his intention to withdraw from the landmark agreement in 2017 and formally notified the United Nations last year. A mandatory yearlong waiting period ends on Wednesday, a coincidence that nonetheless highlights the Trump administration's commitment to derailing efforts that address climate change.

The U.S. has emitted more cumulative carbon dioxide into the atmosphere than any other country since the industrial era began in the mid-1800s. Current U.S. emissions are falling but far too slowly to avoid catastrophic warming. That's in part because the Trump administration rolled back carbon pollution limits from power plants, cars, trucks and fossil fuel operations. American emissions rose slightly in the first two years of his administration. In 2020, the pandemic throttled the economy and led to a short-term dip.

"The lack of action at the federal level is a serious problem," says Rachel Cleetus, policy director for the climate and energy program at the Union of Concerned Scientists, a science advocacy group. The costs of climate-driven disasters such as hurricanes, heat waves and wildfires are rising, she says. In 2020, there have already been 16 climate-driven disasters that cost at least $1 billion each, according to the National Oceanic and Atmospheric Administration.

If that happens, the U.S. will have a lot of ground to make up. Under the Paris Agreement, the U.S. promised to reduce its emissions by about 25% by 2025 compared with 2005 levels, but the country is only on track to achieve about a 17% reduction, according to analysts.

Meanwhile, China, Japan and the European Union have made long-term promises to get all the way to net zero emissions in the coming decades.

U.S. Emission Reductions Slowed After Trump Pulled Out Of Paris Accord

Many American cities, states and companies have also vowed to reduce drastically their emissions of carbon dioxide and other greenhouse gases in the coming years. Twelve states and at least 165 U.S. cities have plans to get 100% of their electricity from renewable sources, according to the climate tracking group America's Pledge.

While adapting to climate change is expensive, there's also evidence it can be good for the economy. Between 2005 and 2017, 41 states increased their gross domestic product while reducing carbon dioxide emissions, according to a recent analysis by the World Resources Institute think tank, and investment in clean energy now generates more jobs than investing in fossil fuels.

Corporations also made a deluge of commitments this year to address the root causes of climate change. They include promises to cut carbon emissions throughout their supply chains, by reducing or eliminating electricity and transportation that burn fossil fuels, or by protecting forests that absorb carbon. It is still unclear exactly how companies will achieve their promises.

The Paris Agreement was central to many corporate pledges, including those by Amazon and Cargill. The historically right-leaning business group the U.S. Chamber of Commerce opposes the president's decision to withdraw from the agreement.

"We believe we should be part of the Paris Agreement," Sabrina Fang, the group's senior director of media relations, wrote in an email to NPR. "Greater collaboration between governments and businesses is essential to build the best models to tackle climate challenges."

The American departure from the Paris Agreement also means the end of U.S. contributions to a global fund to help smaller and poorer countries that bear disproportionate costs of climate change. The United States originally pledged $3 billion to help such nations transition from fossil fuels and adapt to a hotter Earth — the largest amount of any country, but still far less than America's fair share, given its cumulative carbon emissions.

The Trump administration withdrew two-thirds of that money. At a meeting last year, 13 other rich nations, including the United Kingdom, France and Germany, doubled their original pledges, while the U.S. declined to contribute any additional money to the fund.

It leaves a giant funding shortfall for countries struggling with sea level rise and heat waves and that lack money to move people out of harm's way or to upgrade power plants that burn fossil fuels.

"The U.S. was a major pledger to that first funding. When they never delivered, that certainly was an impact to us," says Carlos Fuller, the lead climate negotiator for the Alliance of Small Island States, which represents 44 island and low-lying coastal countries at international climate talks.

For example, Fuller says, the U.S. was expected to help fund a major climate project in the Caribbean that would install weather stations, map the topography of the seafloor to predict storm surge better and help Caribbean nations use that data to become more resilient to the impact of climate change. But the Trump administration reduced the funding.

Now, Fuller says, the project is on hold pending contributions from other nations. He says if the U.S. stays out of the Paris Agreement, it could have dire consequences for low-lying and poor countries.

"These next 10 years are extremely important" for protecting vulnerable people, he says, and the U.S. is currently the second-largest emitter of greenhouse gases. "We really need the U.S. on board."