Accessibility links
Down In The Polls, Trump Turns to Conservative Media For Support President Trump has turned to conservative media and stars for help in his fight to win reelection. They've rewarded him by promoting his questionable claims about the Bidens and the coronavirus. 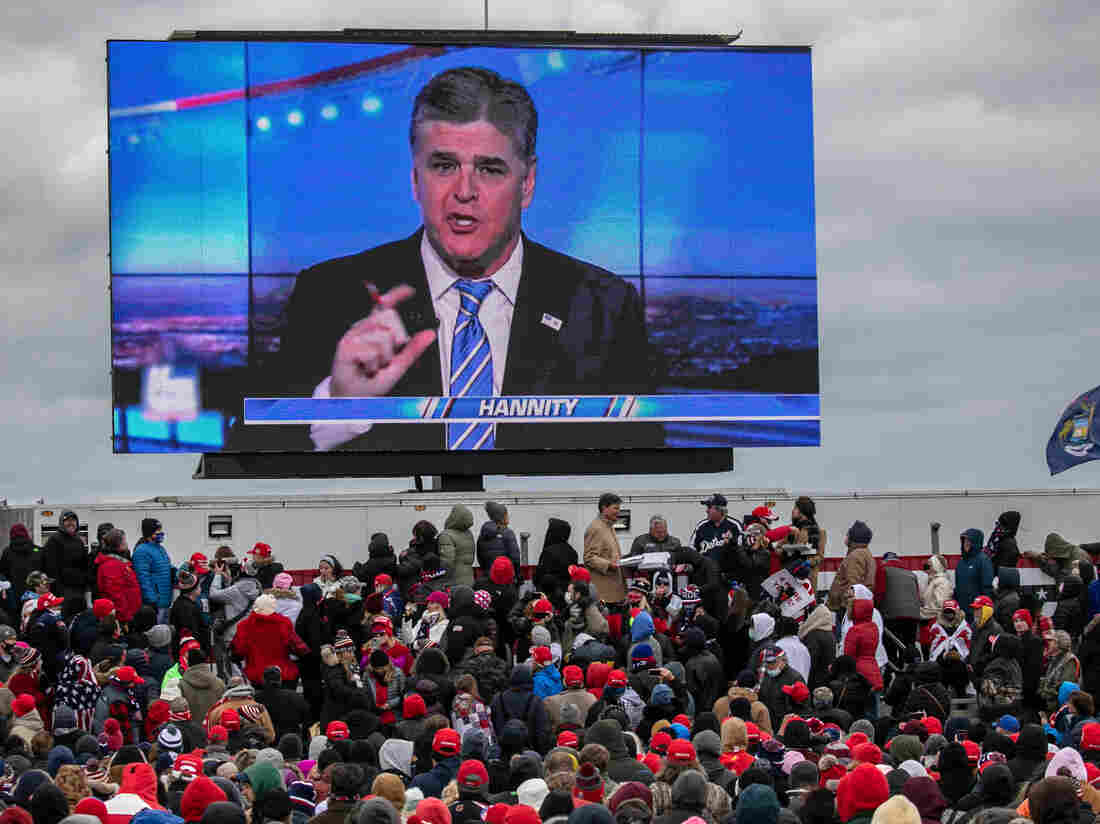 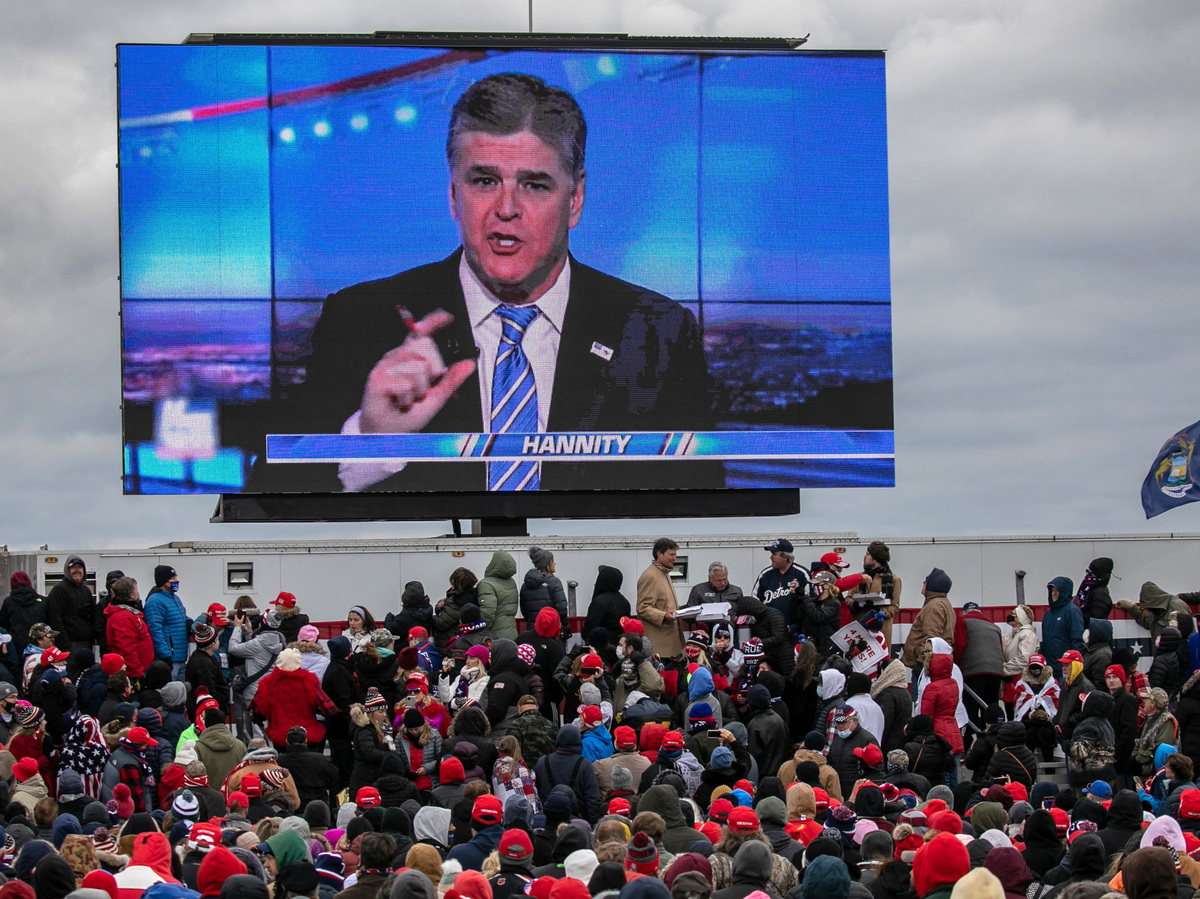 In the final stretch of a tough reelection campaign, a president who burst into public consciousness as a media sensation has returned to the warm embrace of conservative media outlets and their stars.

And they have been returning the favor: giving airtime to President Trump and broadcasting his rallies, and hammering Democratic presidential nominee Joe Biden, his family and his allies.

On Fox News' Trump-friendly The Five, Greg Gutfeld, at once mischievous and wistful, asked, "Why don't the Republicans start preemptive impeachment on Joe Biden, in case he wins?"

On the Trump-fanatical One America Network, White House correspondent Chanel Rion mixed metaphors like a bartender concocting drinks at happy hour: "The Biden-Harris campaign is facing down the barrel to an October surprise of nightmare proportions."

Or take Kristine Frazao's reporting for the Trump-sympathetic Sinclair Broadcast Group, which owns or controls more than 190 local TV stations: "Some GOP lawmakers say time is running out to get to the bottom of what they call corruption at the highest levels of government."

Her report gave strong play to the concerns of Republicans on Capitol Hill who were calling for a special prosecutor to investigate Biden and his son Hunter. Left unmentioned: The 11 lawmakers are among the most extreme and marginalized Republicans in Congress, including one, Rep. Steve King of Iowa, who lost his primary and has been denounced by party leaders for racism, and another, Rep. Paul Gosar, R-Ariz., who has repeatedly promoted groundless conspiracy theories.

Over the past few weeks, as many polls have shown Trump losing to Biden, many conservative outlets have recycled groundless claims about election fraud and unverified claims of unethical or illegal behavior by the Democratic nominee — claims circulated by the president's friends.

In exchange, they bask in the glow of Trump's presence, as Maria Bartiromo of the Fox Business Network did last month. "Tell me how you felt, what you went through," she asked Trump as he recovered from COVID-19 in one of her two October interviews with him. "It's amazing to me that you're back in such strong form right now. How did that happen?"

Since Sept. 1, Trump has given about 30 interviews to the media, according to a rolling tally by CBS White House correspondent Mark Knoller. A clear majority have been with Fox News and other media outfits controlled by media magnate Rupert Murdoch, an ally of the president.

Former Fox News host Eric Bolling, now a host for a national show on Sinclair, has interviewed Trump eight times as president. In an interview with NPR, Bolling argued some of the president's relationship with Fox is transactional.

"I believe some of the stuff he does on Fox is almost like a thank you or a negotiable item, because when he's on Fox or here, our ratings explode, right? So we want him to come on," Bolling told NPR. "In turn, he wants to be on those networks when he does his rallies."

That coverage, Bolling said, is "invaluable to a candidate."

But when Trump is taken unfiltered or live, his distortions and untruths are often unchecked — or, if corrected, gently done so well after his misleading remarks. He has made grand and unsubstantiated claims about Hunter Biden. He lies in saying that vote totals are always counted by the end of the night. He makes baseless assertions that voting fraud is rampant.

When Trump sees insufficient loyalty, he or his associates snark back. Last week, his spokesman trashed Fox News' respected polling unit for its findings that voters were turning against him in previously supporting states. And the spokesman did so on Fox News. Host Harris Faulkner didn't put up much of a defense. Trump has denounced Fox's Chris Wallace, perhaps its most straight-ahead news host, and tweeted twice against the network after it broadcast remarks by former President Barack Obama live, mocking him.

That night, Fox News' chief political anchor, Bret Baier, reminded listeners and the president that the network had just carried Trump's rally live for the better part of an hour. And yet at a rally Monday in Fayetteville, N.C., Trump lionized a laundry list of seven Fox hosts, hailing each for the crowd.

His non-Fox News interviews have been largely granted to media outlets or figures who have equally sympathetic records: Marc Thiessen, The Washington Post's most pro-Trump columnist; Debra J. Saunders, a conservative political writer for the Las Vegas Review Journal, which is owned by casino titan Sheldon Adelson, one of the Republican Party's biggest benefactors; Sinclair, which Trump's son-in-law, Jared Kushner, boasted had agreed to give Trump better coverage in exchange for greater access. (Sinclair denies this, but has run numerous pro-Trump commentaries and pushed Trump's shaky boasts on handling the pandemic and allegations of corruption by the Bidens.)

Among the others is Newsmax's Greg Kelly — a former Fox star and son of a former New York City police commissioner well known by Trump — on an outlet founded by Trump's friend Christopher Ruddy. And then there's Trump's friend and ally Rush Limbaugh.

When Trump contracted COVID-19, he couldn't stage rallies under public health rules. Columbia University historian Nicole Hemmer, who studies conservative media, noted that Limbaugh mused aloud on how he could help Trump by turning over his microphone to the president to do what he called a virtual rally.

"This, sir, is a mega-MAGA rally and we are all thrilled to be with you today, we are so glad you're doing better," Limbaugh said while introducing the president. Trump replied, "Well, I want to thank you, Rush, you're a fantastic man, a friend of mine. Before I knew you as a friend, you were a supporter."

Limbaugh almost never invites big-name guests on his show, arguing he's the expert. That conversation with Trump lasted two hours. And on a subsequent show, the top-rated radio host devoted another show to listening to Trump at an actual rally.

"It gives you a sense of how all-in both the president and Limbaugh are in the 2020 election," Hemmer said.

It's not just Trump and Limbaugh, but the president and the conservative media.

You can also see a game plan emerge for what would transpire if Trump were to lose: Conservative outlets would spend a lot of time on Trump's near-every utterance, and devote a lot of time to attacking Biden and his administration.