Accessibility links
Review: Elections Aren't Everything In Steve James' 'City So Real' The Steve James documentary series City So Real is about the 2019 Chicago mayoral election. But its real message is that no one election determines the future.

In 'City So Real,' An Election Is Only The Beginning

In 'City So Real,' An Election Is Only The Beginning 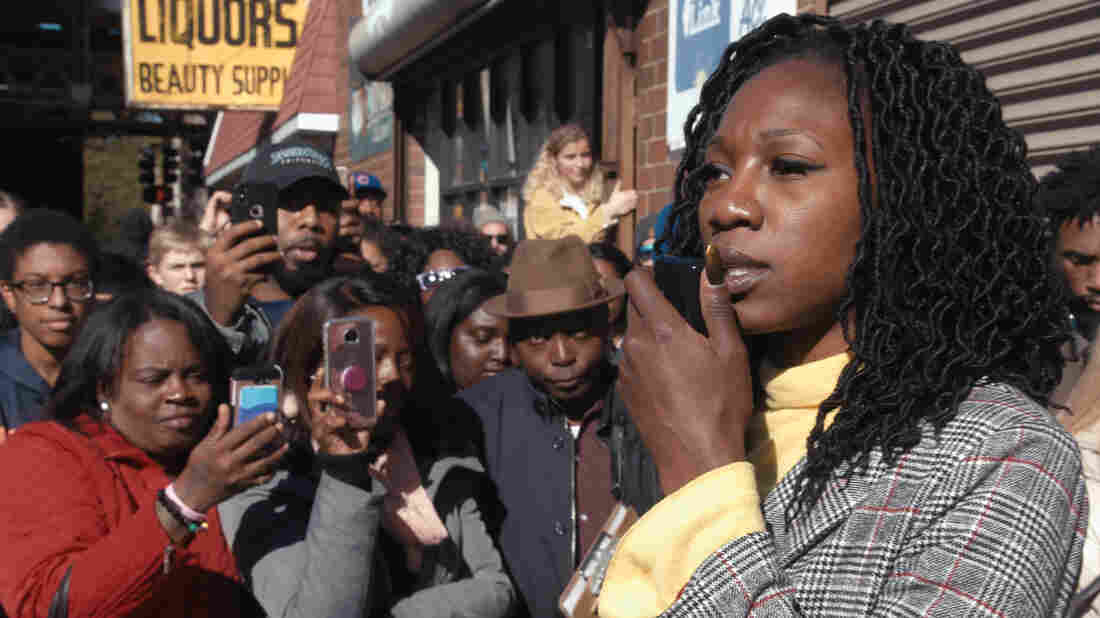 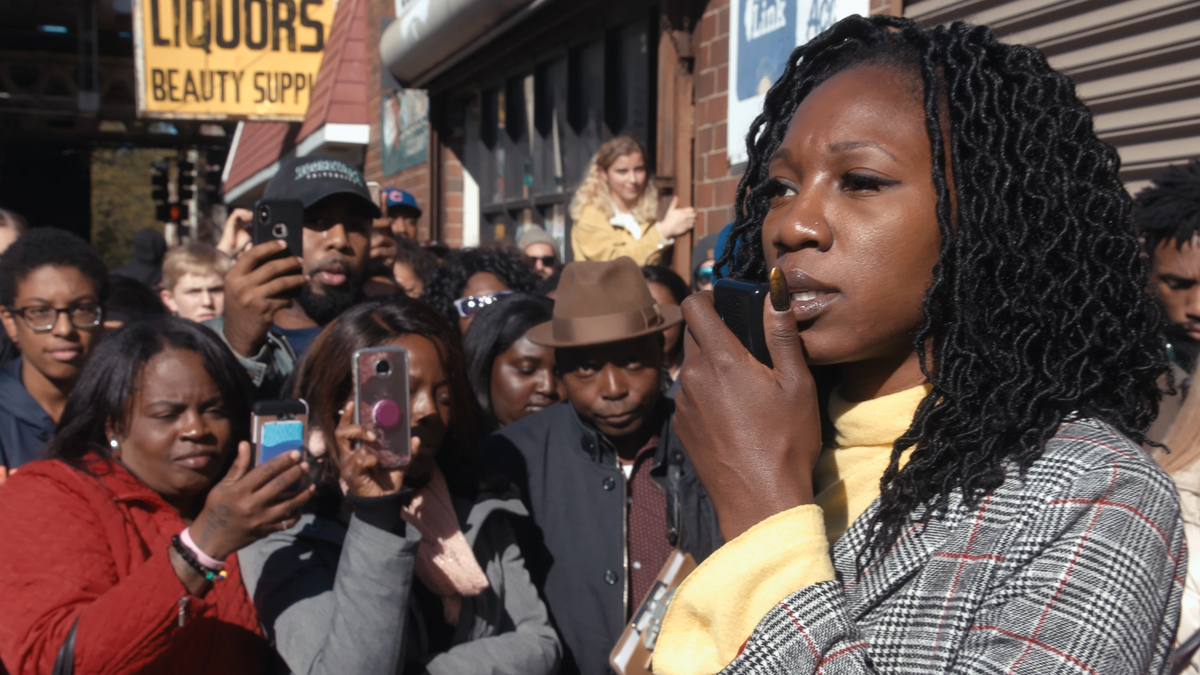 The spine of the Steve James documentary series City So Real is the 2019 campaign that led to Lori Lightfoot becoming mayor of Chicago. But the heart of it is the conviction that no single election, no matter how hard-fought and no matter how high-stakes, is the single cause of or cure for problems that are systemic and longstanding. Director Steve James (Hoop Dreams, but also fine films like Life Itself and Abacus: Small Enough To Jail) may not have gotten the story he anticipated when he started, but the one he tells here has arrived right on time.

Last year's Chicago mayoral race turned into a real scramble, particularly after Rahm Emanuel decided not to run for reelection. A large field of candidates scrapped to get on the ballot for the February race. Fourteen of them did. Of those, Lori Lightfoot and Toni Preckwinkle advanced to a runoff, and Lightfoot became mayor in April.

James doesn't begin with a deep examination of the election, though: He begins by introducing the city. His camera lingers on porches, at protests, at the enormous Bud Billiken Parade. And he begins to introduce you to mayoral candidates who, even in a huge city like Chicago, are working hard at the kind of one-on-one retail politics — shake a hand, have a cup of coffee — that might seem obsolete. These candidates are operating in a city that finds itself in crisis in a number of ways, all of which community activists and organizers have long been trying to address. James resists any simple explanation of Chicago: There are scenes that illuminate the deep divide not just between white and black residents, but among Chicagoans across other lines: generational and experiential, to name two, as well as political.

Steve James is a mostly invisible filmmaker. What you see is what he shot, out in the city. He does talk to people and he does have them speak to the camera, but it's done where they are, in the moment, rather than seated and lit in a studio. There's no narration; there are limited words on the screen, other than identifications of people speaking. It's an immersive style that's well-suited to longer formats like a five-plus-hour series, because rather than pointing to the subtleties of the city he's profiling, as he might have to in a feature film, he lets them show themselves like a slowly developing photo in a darkroom, and that kind of filmmaking takes time.

In 2018, when the story begins, Chicago is deeply divided over the trial of Jason Van Dyke, the police officer who would eventually be convicted of second-degree murder and 16 counts of aggravated battery for shooting 17-year-old Laquan McDonald. The shooting and the trial, as the film opens, are a wound, open and painful. Police violence is already the subject of large protests; the city's handling of the video of McDonald's shooting, which happened back in 2014, is as much a focus of public anger as the shooting itself. Chicago is also being used as a talking point because of its high murder rate, by people who have little actual interest in its well-being and little knowledge of the work going on in its communities to reduce violence. It's in this environment that this very contentious election begins.

But even though the election is a storyline full of twists, the film is deliberate and quiet. There's a lot about City So Real that reminded me of the work of Frederick Wiseman, the celebrated documentarian who makes long films that document sprawling systems by watching their small gears turning in close-up — he most recently made Ex Libris about the New York City Public Library; Monrovia, Indiana about a midwestern city in transition; and City Hall about the city government of Boston. Wiseman has endless patience for spending, say, 20 minutes just watching a public hearing or a board meeting or a celebration of Veteran's Day. While James doesn't go that far, this is still a series about how small things are the engines driving big things, as much as the other way around. Who even makes it to the ballot, for instance, is determined in a series of dull institutional rooms where an administrator sitting at a little table under fluorescent lights decides disputes over the validity of signatures on a petition.

The first four of the five episodes follow the election, from around the time Emanuel announced he wouldn't run again through the election of Lightfoot (although almost no time is spent on the runoff; only on the initial campaign that landed her in the top two). The fifth episode, which is perhaps the most surprising, is an update covering the spring and summer of 2020, a year after Lightfoot was elected. When we meet her again, she has become the mayor responsible for COVID-19 policies. While she ran for mayor in a time of enormous anger over police violence, she remains vehemently opposed to calls to reduce or eliminate police funding, even as police responses to protests in Chicago are much as they are everywhere else. And the divides between residents of her city remain. A white guy waiting outside a barbershop that's finally about to reopen after its pandemic closure is asked whether he's been surprised by the unrest in the city. It doesn't, he says casually. "That happens every time someone — one of them get killed. They riot."

The balance that's so effective here is that James brings out the scale of the election — the money and the attention and the effort that's involved in winning it — but then demonstrates that even this massive undertaking is a drop in the bucket compared to the scale of the systemic problems that need solving. The outcome of the mayoral election doesn't do anything about racism on its own; it doesn't do anything about police violence unless it leads to some other kind of change. As the film presents the election's consequences, Lightfoot's election provides Chicago with a somewhat different set of priorities, and a mayor who was willing to be quite aggressive in fighting the pandemic. But big things happening in the city are still happening: The super-expensive Lincoln Yards development didn't stop. The relocation of a large scrap yard to a poorer, browner neighborhood didn't stop. Police violence is top of mind for activists, much as it was before.

The lesson is absolutely not that elections don't matter. These candidates were profoundly different in some respects; one was Garry McCarthy, the police superintendent who had been fired for mishandling the Laquan McDonald murder. Bill Daley was in this field, running to become the city's third Mayor Daley. James spends a lot of time with the fascinating candidacy of Willie Wilson, a businessman and frequent political candidate who goes from church to church late in the campaign speaking to congregations and saying essentially, "Vote for who you want; by the way, I brought a large donation for your church." And Lightfoot, as she notes, is a trailblazer, a black woman who's also the first openly gay mayor of a city the size of Chicago. These candidates were plenty different. The series doesn't question that it mattered who won.

The lesson of that final episode is that systemic problems are extraordinarily hard to solve, and they require discipline and commitment across years. Watching City So Real, it's easy to feel pretty glum about the likelihood that these profound divides, brightly illuminated in Chicago in this series but present in many other places, will ever improve at all. But at the same time, James tracks a number of younger candidates who didn't become mayor, but who remain, a year after the election, deeply involved in advancing the well-being of their city and their neighborhoods. They have a commitment that is not exclusive to electoral politics; electoral politics are one part of a broader strategy that, even in defeat, they pursue. You can think of that as sad, that maybe people who really care about their communities wind up abandoning politics as hopeless and move on to nonprofits or for-profits or academia. Or you can think of it as hopeful: a recognition that there are a million things you can do to try to bring the things you care about to fruition. Running for office is only one. Voting is another.

But there's nothing that will take the place of commitment across years, commitment that shows up not only in times of crisis and not only from the people who are most affected and vulnerable. City So Real arrives with the message that no matter what happens in any one election, it's going to take a lot more than that one election to determine the future.

City So Real originally aired on Nat Geo; all five episodes can now be streamed on Hulu.