Accessibility links
Turkish Girl Pulled Alive From Quake Debris The girl's name is Ayda Gezgin – but officials call her "our miracle" after she was pulled relatively unharmed from a collapsed building. 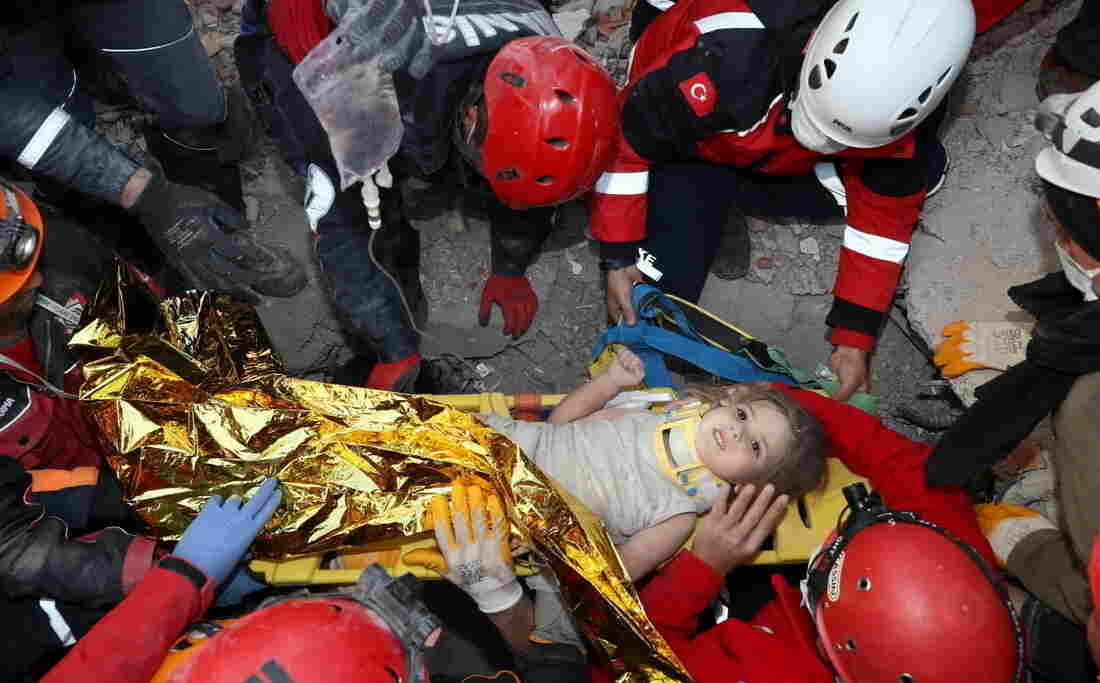 Rescue workers carry Ayda Gezgin away from where she was trapped by rubble after a building collapsed during last week's earthquake in the Aegean port city of Izmir, Turkey. Turkey's Disaster and Emergency Management Presidency via Reuters hide caption 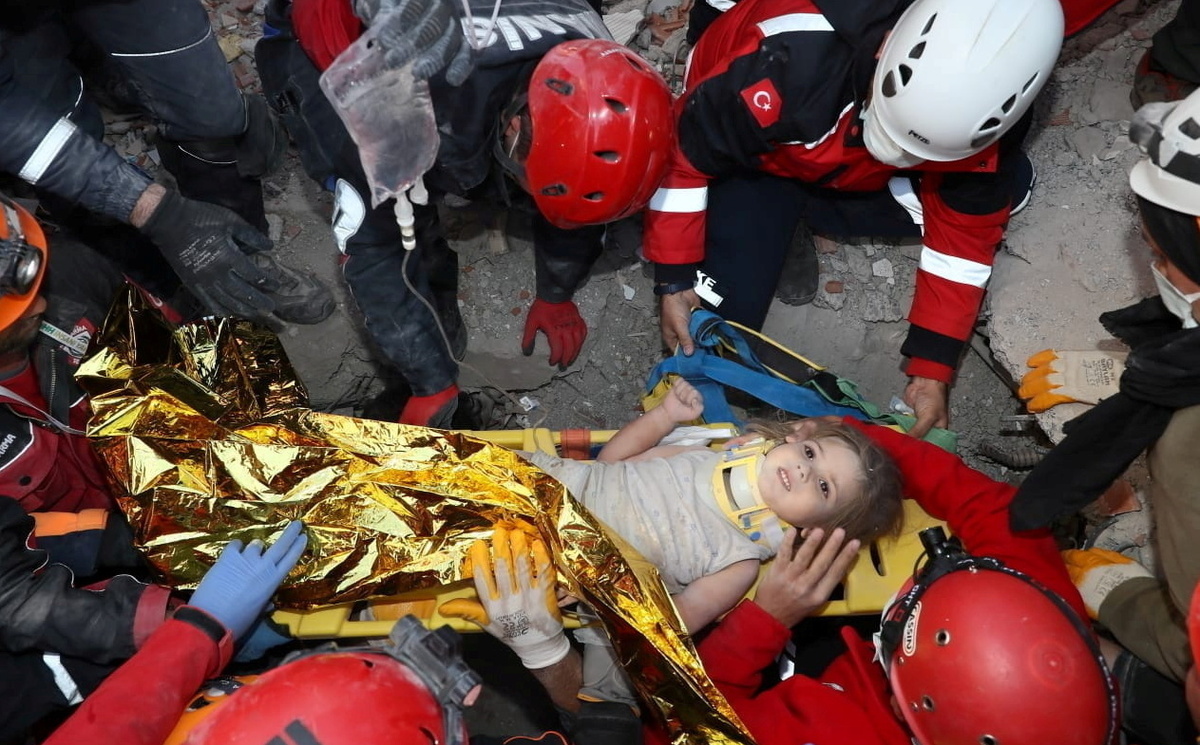 Rescue workers carry Ayda Gezgin away from where she was trapped by rubble after a building collapsed during last week's earthquake in the Aegean port city of Izmir, Turkey.

Turkish rescue crews found a bright spot of joy amid devastation on Tuesday, pulling a little girl out of a collapsed apartment building four days after a strong earthquake ravaged the large city of Izmir.

The girl's name is Ayda Gezgin – but Turkish officials are calling her "our miracle" after she emerged relatively unscathed despite spending 91 hours pinned between a heavy dishwasher and debris.

She is 3 years old, according to Health Minister Fahrettin Koca.

A worker heard the girl crying out as recovery teams carefully removed layers of concrete and debris, hoping to find anyone who survived Friday's 7.0 magnitude earthquake. A call immediately went out to silence generators and other equipment.

Nusret Aksoy, who was leading the search and rescue team, said he was able to speak to the trapped girl, asking her name and how she is.

"I'm fine," she replied, according to a news release from the Interior Ministry. Aksoy said he then saw the girl wave her hand.

As they toiled, the recovery team was also mindful of new temblors that could dislodge wreckage: Western Turkey has experienced more than 1,500 aftershocks since the large quake.

The delicate process of reaching Ayda eventually allowed a worker to hold her hand. Then a man was able to cradle her head. Eventually, she was freed from the rubble and put on a stretcher as the crowd around her cheered. She was covered in dust but deemed to be in good health, considering her ordeal.

Aksoy said a dishwashing machine seems to have helped protect the girl when her home collapsed around her on Friday.

"Don't be afraid sweetie. We are here," a recovery worker tells Ayda in video footage of her rescue. She responds calmly, giving a quick nod of her head. The man holds her hand as he introduces himself and tells the girl that her father is waiting for her.

As she was being taken away, covered by a thermal blanket, the girl asked a medic for ayran, a popular yogurt drink, and köfte, Turkish meatballs.

The girl also yelled out for her mother, but rescue workers said the body of her mom, Fidan Gezgin, was found in the rubble. When the quake struck, the pair had just returned from visiting a park, according to local media. Her father and brother are safe, having been out of the apartment when the earthquake hit.

Ayda is the 107th person rescued from rubble, joining a list that includes another young girl and her siblings who were rescued Monday. Pets – cats and dogs – have also been saved. Ayda's life won't be the same as it was a week ago – but she will have a life, and that news is being celebrated.

The quake's death toll has risen to 109 in western Turkey, climbing in recent days as more bodies were recovered. More than 1,000 people were injured – although roughly 900 have now been discharged from medical care, the Disaster and Emergency Management Authority said.

Workers have now completed search and rescue operations in 13 of the 17 buildings that collapsed; recovery efforts in the four other buildings continue, the agency said.