Accessibility links
Who Won The Election? It's Close, But Trump Falsely Claims He Did Trump spoke after the AP called Texas, Florida, Ohio and Iowa for him. Tight races, strong turnout and record amounts of mail-in voting left millions of legitimate votes still to be counted. 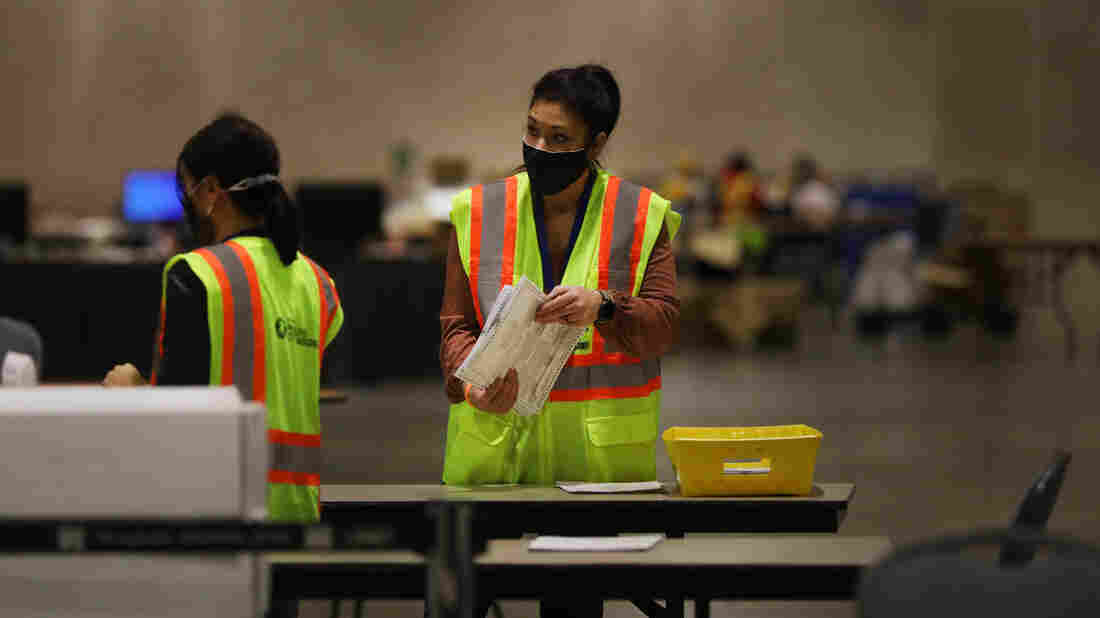 Election workers in Philadelphia count ballots on Tuesday. Pennsylvania is among several swing states that have yet to be called. Spencer Platt/Getty Images hide caption 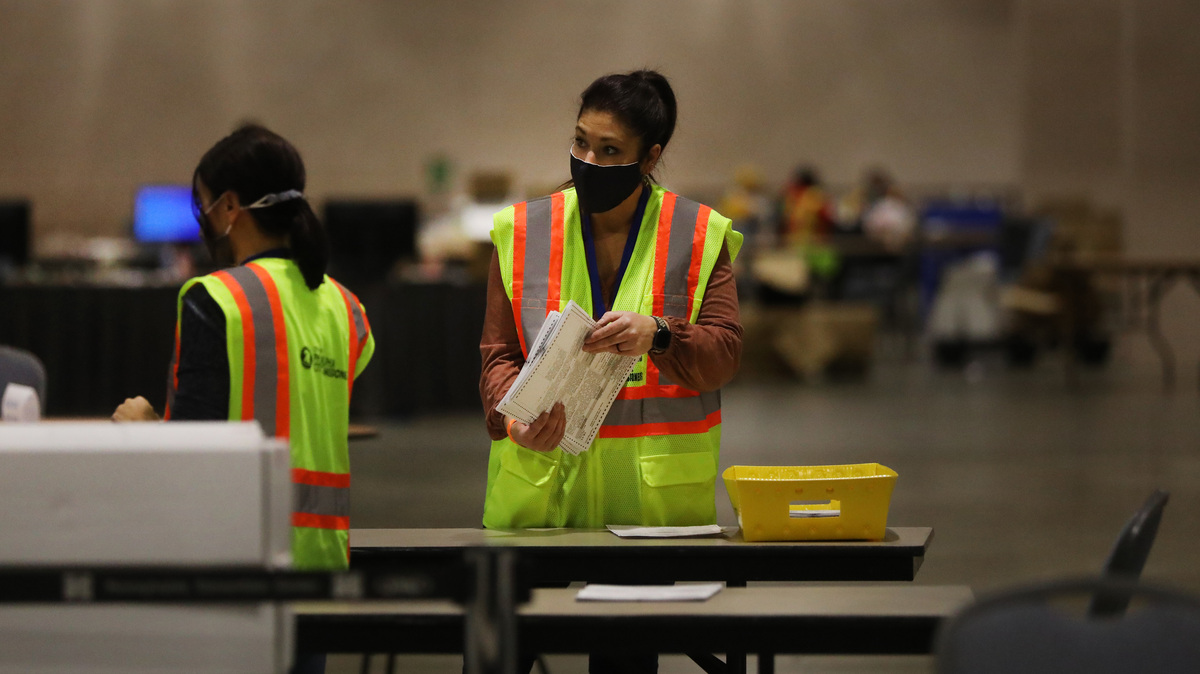 Election workers in Philadelphia count ballots on Tuesday. Pennsylvania is among several swing states that have yet to be called.

The 2020 presidential election remained up in the air early Wednesday after tight races, strong turnout and record amounts of mail-in voting left millions of legitimate votes still to be counted, and races in six key states too close to call.

Democratic candidate Joe Biden urged patience until "every vote is counted," but President Trump railed against the extra time required to count the ballots, falsely accusing Democrats of trying to steal the election from him.

"We will win this, and as far as I'm concerned, we already have won it," Trump said in remarks to supporters in the White House East Room.

Trump called the election "a fraud on the American public" and said, "Frankly, we did win this election." He also said he planned to take the battle to the U.S. Supreme Court but did not explain what he meant.

Biden's campaign manager called the statement "outrageous" and said counting of ballots would continue. "If the president makes good on his threat to go to court to try to prevent the proper tabulation of votes, we have legal teams standing by ready to deploy to resist that effort. And they will prevail," Jen O'Malley Dillon said. 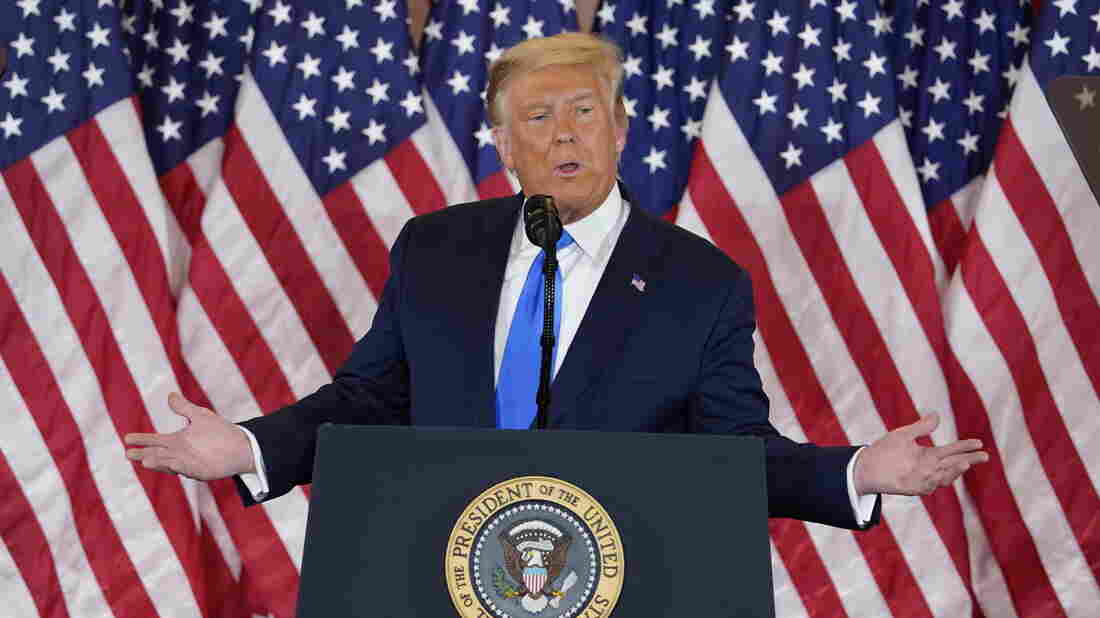 President Trump called the election "a fraud on the American public" during remarks to supporters in the East Room of the White House early Wednesday. Evan Vucci/AP hide caption 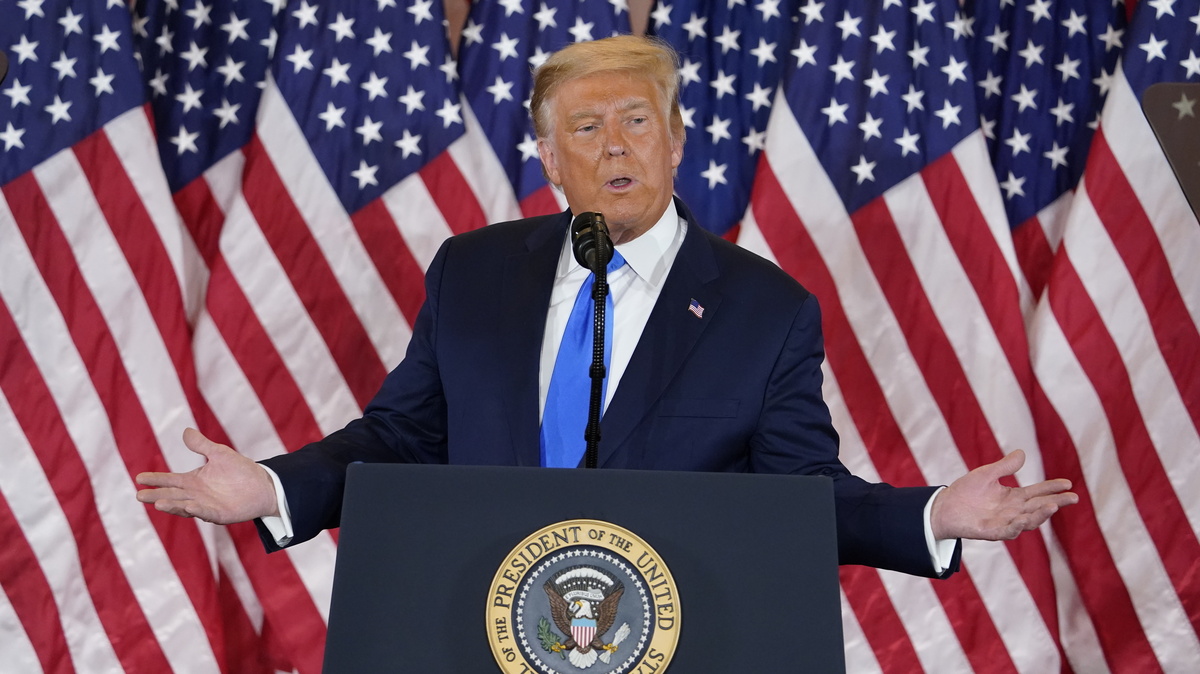 President Trump called the election "a fraud on the American public" during remarks to supporters in the East Room of the White House early Wednesday.

Trump has been hoping to re-create his come-from-behind win of 2016. He trailed Biden in polls throughout the campaign and had raced to try to regain ground, particularly after he lost 10 days of campaigning when he caught the coronavirus and was hospitalized.

But on election night, he outperformed expectations in Florida, winning his adopted home state where he campaigned hard on an anti-socialism message to appeal to Latino voters. That outcome, along with wins in Ohio and Iowa, gave him a narrow path to a second term.

Biden won the swing states of Arizona and Colorado, and hung on to Minnesota, a state Trump had wanted to flip. At 4 a.m. ET, Biden had 238 of the 270 Electoral College votes needed to cinch the race, while President Trump had 213 votes. A total of 87 votes hung in the balance, according to calls from The Associated Press.

Election officials in two of those pivotal states — Pennsylvania and Michigan — have said the ballot counts in some areas of the states won't be finished until at least Wednesday.

Voter turnout was projected to be the highest since 1908, with record levels of early and mail-in voting as people looked for ways to avoid long lines on Election Day amid the COVID-19 pandemic.

The virus has loomed large over decisions in voting booths. Data from a large-scale poll of voters done in the past few days by AP VoteCast showed 42% of people said the pandemic was their top issue, followed by a related issue: the economy and jobs, at 27%. Most disapprove of the way Trump has handled the pandemic.

At least 100 million people voted prior to Election Day in the 2020 general election 🥳https://t.co/s8K2xFDeSA pic.twitter.com/e4uqPKq3Iz

Biden spoke at a drive-in rally with his supporters in Wilmington, Del., early Wednesday, saying he wasn't surprised the vote was taking a long time to count, and expressing optimism about Wisconsin and Michigan, as well as Pennsylvania. "We believe we're on track to win this election," he said. "It ain't over 'til every vote is counted." 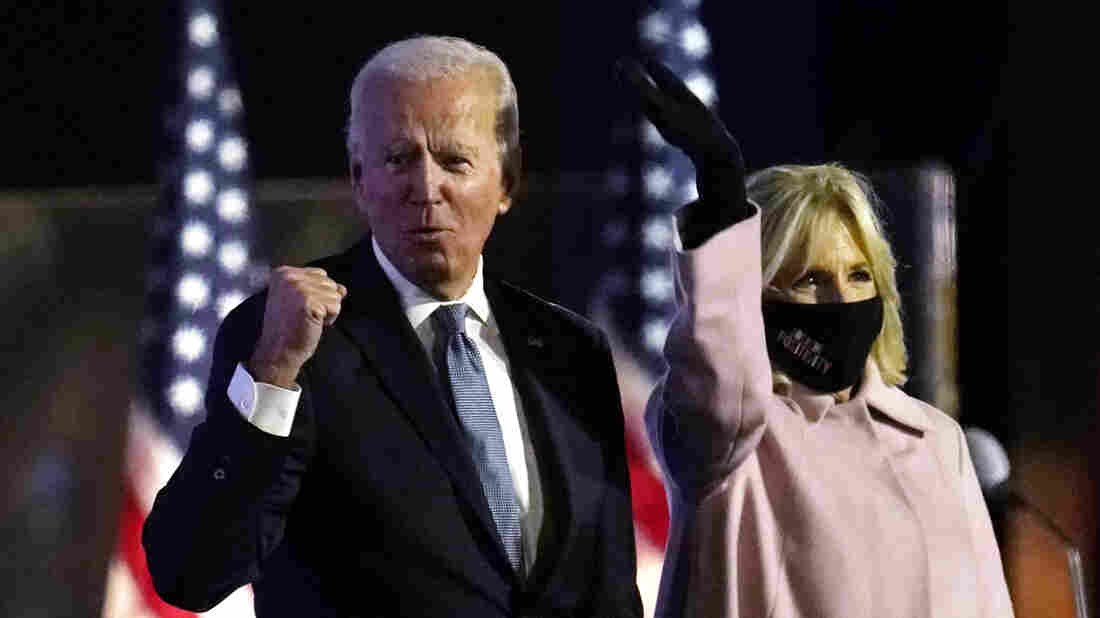 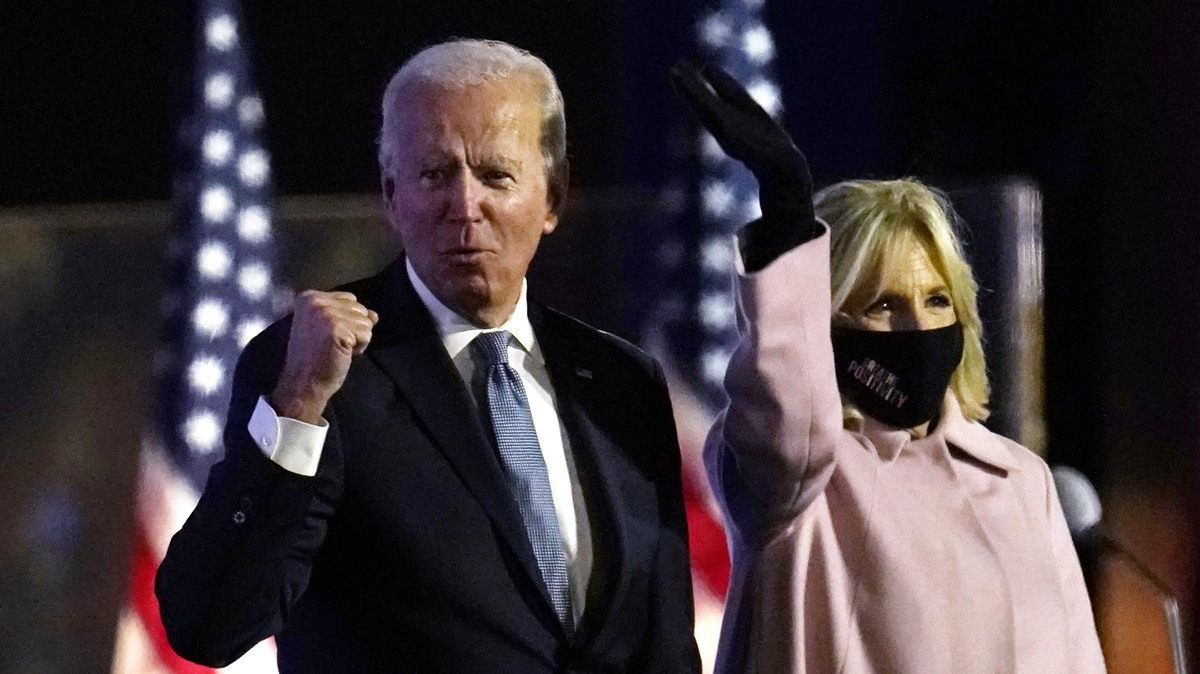 Shortly after, Trump responded on Twitter, saying he would be making a statement of his own about "a big WIN" and accused Democrats of "trying to STEAL the election."

We are up BIG, but they are trying to STEAL the Election. We will never let them do it. Votes cannot be cast after the Polls are closed!

Twitter flagged the tweet for being misleading. Votes were not cast after polls were closed. Rather, it's taking time to count them because of the large number of mail-in ballots.

Trump was watching returns in the White House, where his campaign — once again flouting norms that traditionally keep political activities separate from the official trappings of the White House — set up a war room in an adjacent office building. (His campaign defended the move, saying there was no expense incurred by taxpayers.)

Earlier in the day, Trump had sounded reflective. "I think we're going to have a great night," his voice raspy after a marathon of rallies in the last days of the election. "But it's politics and it's elections and you never know."

Trump has long railed against the prospect that the election would not be settled on Tuesday, complaining about a Supreme Court decision that will allow mail-in ballots in Pennsylvania to be counted for three days after the election.

Unlocking The Keystone State: Why Pennsylvania Is Crucial

Earlier this week, an Axios report citing unnamed Trump confidantes raised the specter that Trump would prematurely declare victory. But on Tuesday morning, Trump said he would do so "only when there's victory. There's no reason to play games."

When he made his remarks in the wee hours of Wednesday morning, Trump said it was "clear" he had won Georgia, North Carolina and Pennsylvania, even though many votes remain to be counted in those states, and results for those states were not yet close enough to call.

Vice President Pence also made brief remarks, albeit with a slightly different take, saying he expected Trump would eventually win the vote.

"I believe as you do that we are on the road to victory and we will make America great again, again," Pence said, reprising Trump's campaign slogan.