Accessibility links
When We Might Know Who Wins The 2020 Presidential Election Here's how much longer it will take to count the votes in the remaining key states of Pennsylvania, Georgia, Nevada and North Carolina. 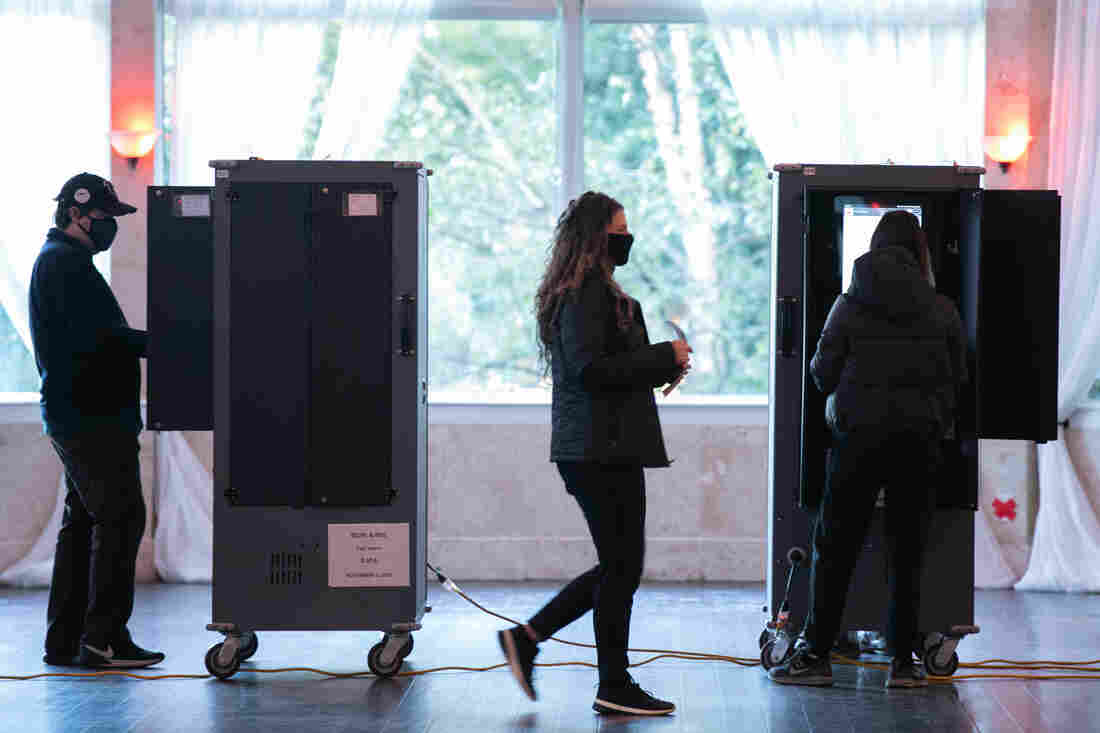 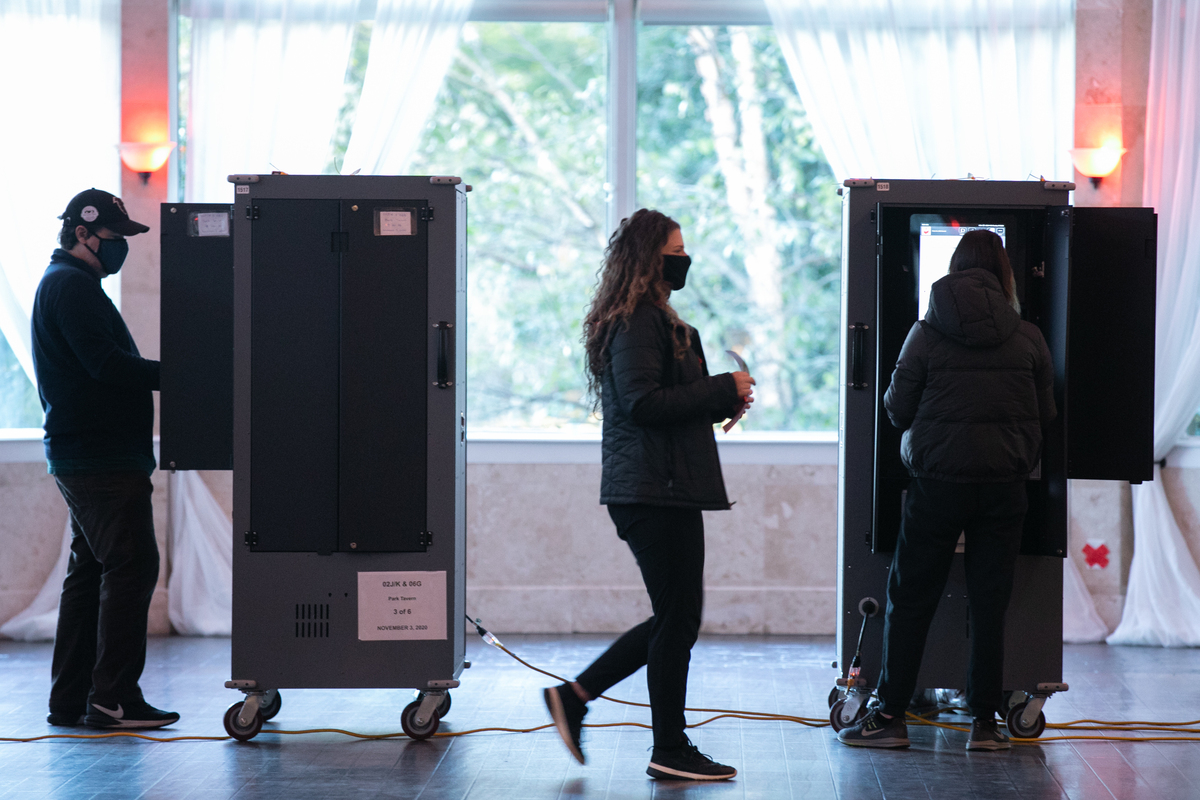 The United States woke up the morning after Election Day not knowing who will be president for the next four years. It's not unprecedented, and with a slew of mail-in ballots to process, several key states are working to finish counting.

The Associated Press has yet to make a call in the swing states of Georgia, Nevada, North Carolina and Pennsylvania. On Wednesday afternoon and early evening, the organization called Wisconsin and Michigan for Joe Biden, allotting the former vice president the states' 10 and 16 electoral votes, respectively. The critical battleground states had swung for President Trump in 2016.

As states continue to tally votes, Trump has baselessly planted doubts about the integrity of mail ballots counted after Election Day. But those ballots are valid votes: They count, although it may take some time before they're reported.

In Wisconsin, the president's campaign said it intends to request a recount, which it is allowed to do if the declared winner's margin of victory is within 1 percentage point. Biden's current lead, with 99% of estimated votes in, is about 20,000 votes, or 0.6%.

Let's break down the timelines ahead by state:

Georgia hopes to get all votes counted Wednesday (16 electoral votes)

About 96% of Georgia's estimated ballots have been reported. Metro Atlanta is the holdout area — a populous region that's likely to be strong for Biden, who is narrowly trailing Trump in the state.

As of Wednesday evening, 163,000 absentee ballots remain to be counted, according to Georgia Public Radio. Trump leads Biden by just under 60,000 votes, according to The Associated Press.

Of the state's 159 counties, Fulton is the only one that had not reported its complete results as of Wednesday evening, according to the secretary of state's website. Neighboring DeKalb County is now listed as having completed its counts. 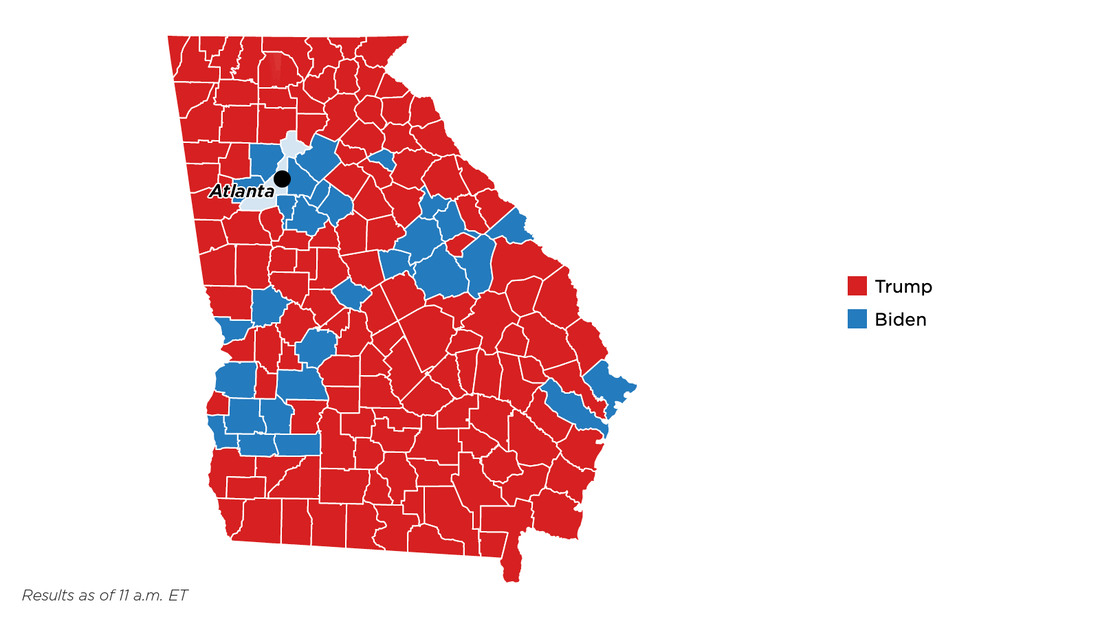 As of early Wednesday afternoon, Fulton County election officials reported that around 67,000 ballots needed to be scanned and adjudicated by the end of Wednesday.

The tally doesn't yet include all absentee or provisional ballots.

Fulton County officials said that while the majority of votes would be reported Tuesday night, "Absentee ballot tabulation will continue in coming days." The county had previously said it plans to complete its processing by 5 p.m. Friday.

Officials said thousands more ballots arrived on Election Day, either through the mail or at drop-off boxes. Georgia law allows officials to count absentee ballots as they come in, but counties make their own plans on scanning ballots early.

County election officials and workers in Georgia "executed their duties well, and in most cases, flawlessly," Secretary of State Brad Raffensperger said. He added, "Our job isn't done yet, though."

With 99% of the estimated vote counted in Michigan, the AP has called the state for Biden.

Earlier on Wednesday, Michigan Secretary of State Jocelyn Benson said, "I'm optimistic that by the end of the day the majority of our ballots will be tabulated, and we'll be much closer to having a full, if not a full and complete, unofficial result to announce at that point."

The Detroit Department of Elections said it expected to finish tabulating absentee ballots by 6 p.m. ET.

Wayne County, home to Detroit, is a Democratic stronghold and typically takes longer to count its votes, a timeline that was even longer this year given the deluge of mail ballots. The city clerk in Flint, another heavily Democratic city, said she would not finish counting the city's roughly 20,000 mail ballots until Thursday. 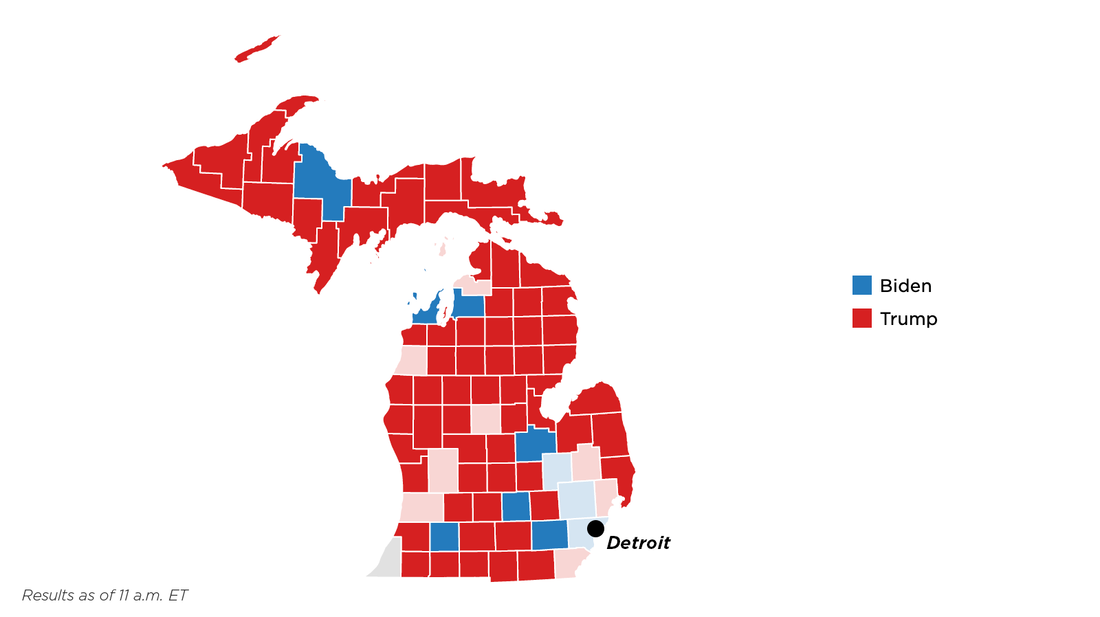 The vote tally is taking awhile because of when the state law allowed election officials to start processing and then counting mail ballots. Unlike some other states, where election workers could begin the processing and, in a few cases, the counting days or weeks in advance, Michigan could not.

Counties with populations more than 25,000 could begin processing ballots, doing work such as opening envelopes and checking signatures, on Monday. Smaller counties could not begin until Election Day.

Nevada is close, with next update on Thursday (6 electoral votes)

The Nevada secretary of state's elections division says it will give its next update on results Thursday morning. As of Wednesday evening, the state had completed 75% of its tally, with Biden having a slight edge.

"Counties have until Nov. 12 to finish the count," Jennifer Russell, a spokeswoman for the Nevada secretary of state's office, told NPR.

As of early Wednesday morning, all in-person votes — both early and from Election Day — were counted, along with all mail ballots through Nov. 2, the elections division said.

Still uncounted: mail ballots received on Election Day and through the next week, along with provisional ballots.

"Ballots outstanding is difficult to estimate in Nevada because every voter was sent a mail ballot," the elections division said. "Obviously, not all will vote."

About 94% of the expected vote has been counted in North Carolina, but the race between Biden and Trump remains tight, tilting toward the incumbent.

North Carolina was able to process mail ballots in advance, so election officials there aren't sorting through the bulk of ballots as in some other states. But in North Carolina, mail ballots postmarked by Nov. 3 can be received and added to the total numbers until Nov. 12. If the presidential election remains close, the race could remain undecided for days.

Most Pennsylvania ballots will be tallied by Friday (20 electoral votes)

As of late Wednesday evening, the state's vote reporting process was at 89%, up from 64% on Wednesday morning. At a morning press conference, Secretary of State Kathy Boockvar said more than 50% of the state's mail-in ballots have been counted, but there are still millions left and there may not be complete results from the state before the end of the day.

"At this point, I think we're actually a little bit ahead of where I thought it would be, which is great," she said, noting that it's still a "matter of days" before the overwhelming majority of ballots will be counted.

The Trump campaign has said it will sue the state to halt the counting of votes over claims that Republican canvassing monitors weren't able to get close enough to watch the vote being count.

But Boockvar said she doesn't anticipate that vote count is going to stop.

Pennsylvania law requires officials to wait until the morning of Election Day to process mail-in ballots. The state accepts ballots postmarked by Nov. 3 as long as they arrive within three days.

"Make no mistake our democracy is being tested," Gov. Tom Wolf, a Democrat, said at a press conference Wednesday.

"We all will vigorously defend against any attempt to attack [the] vote in Pennsylvania. And every Pennsylvanian can have confidence in the outcome of this election. " 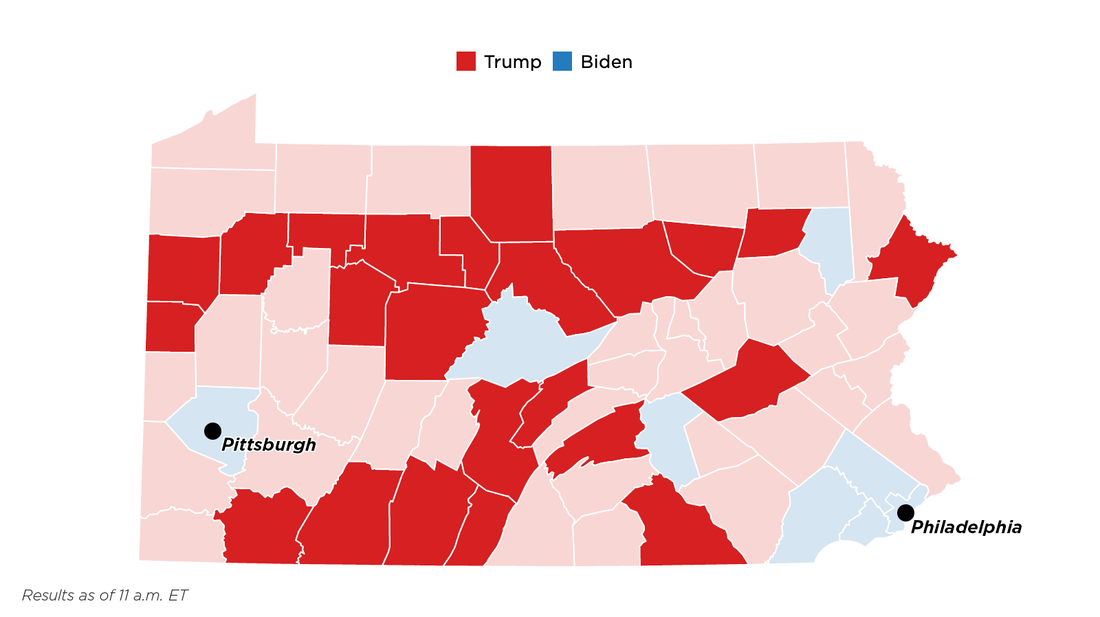 As of late Wednesday afternoon, election officials in Philadelphia had counted more than 230,000 of the city's ballots. Philadelphia is the state's largest city, with 350,000 to 400,000 mail ballots, and it could be days before they are all counted.

"We'll be done as soon as we're done," Philadelphia City Commissioner Lisa Deeley said. "That's how elections work – we count the votes and we end up at the end."

Wisconsin Elections Commission Administrator Meagan Wolfe emphasized on Wednesday that there is a lengthy process to check the validity of the results and certify them, but there are essentially no more votes to report, NPR's David Schaper reported.

Biden's lead sits at about 20,000 votes, which is under the 1% threshold needed for a recount. The Trump campaign has said it will request one.