Accessibility links
Why Joe Biden Saw Mixed Success With Latinos Democrats have long cited the growing Latino population to win states such as Florida, Texas and Arizona. But Biden's performance concerned members of his party — and may have cost him votes. 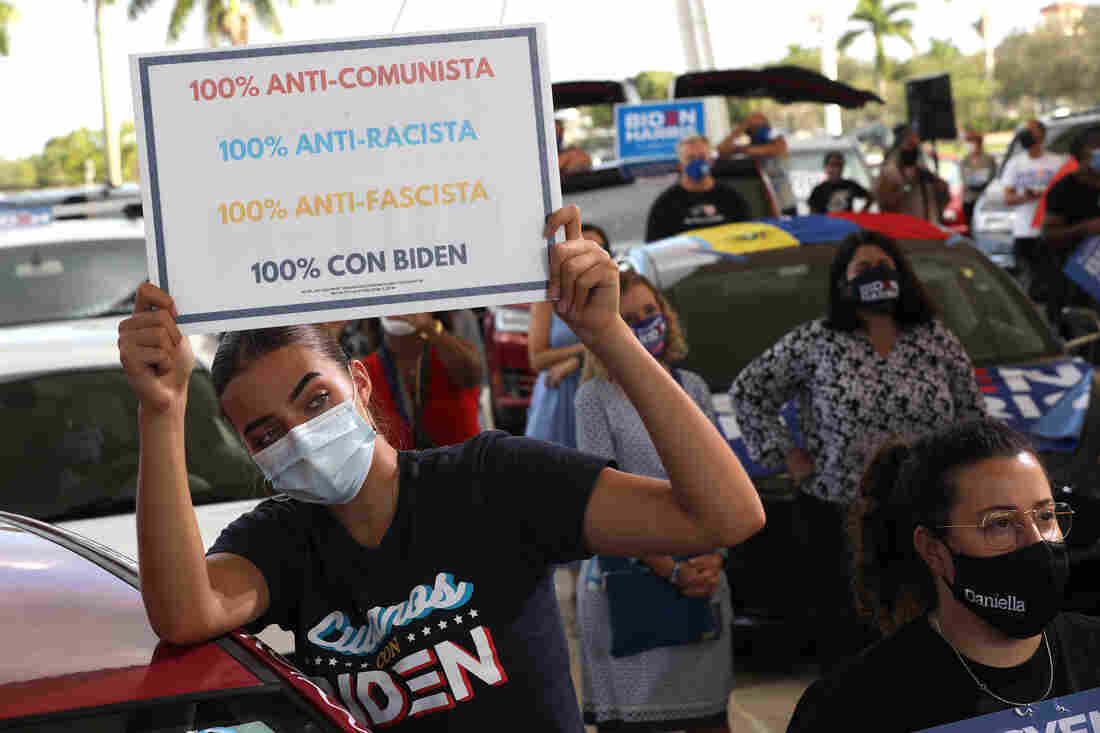 Wearing a face masks to reduce the risk posed by the coronavirus, Sophia Hildalgo (L) and Amore Rodriguez of Miami stay with their car decorated in Cubans for Biden paint. Chip Somodevilla / Getty Images hide caption 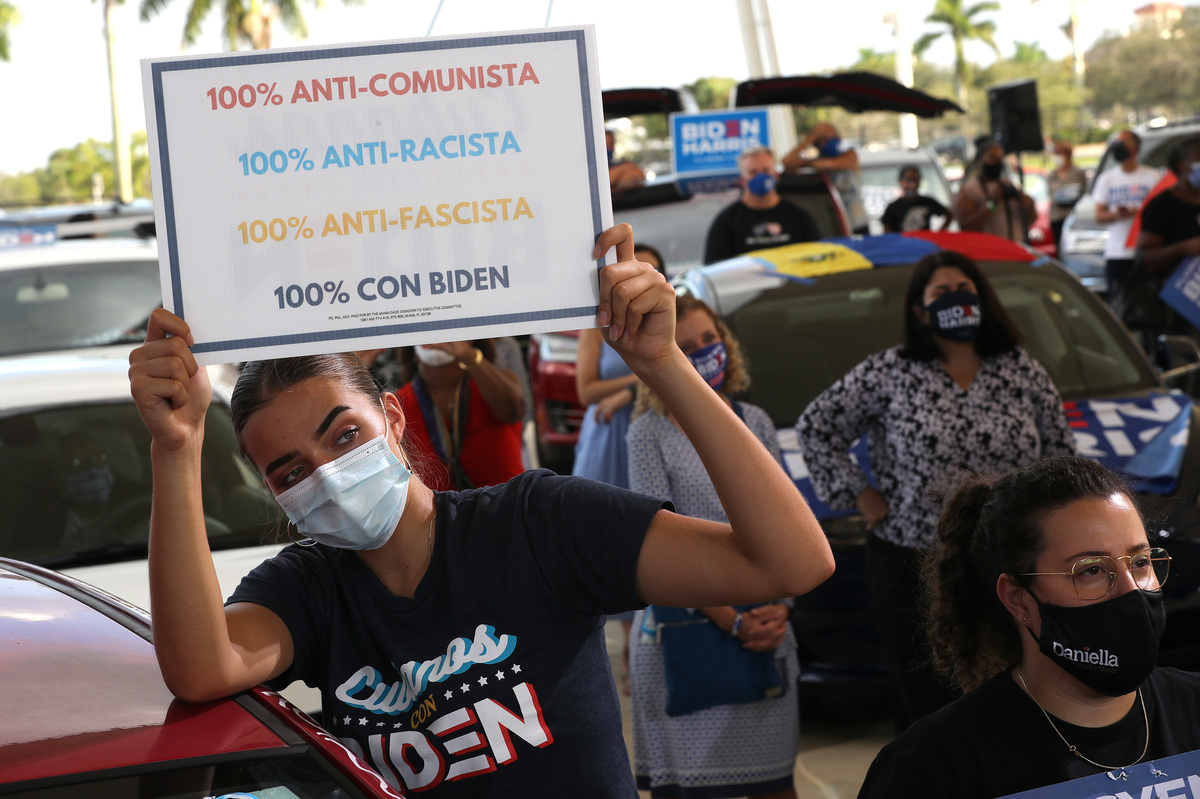 Wearing a face masks to reduce the risk posed by the coronavirus, Sophia Hildalgo (L) and Amore Rodriguez of Miami stay with their car decorated in Cubans for Biden paint.

Democrats' long-term hopes for electoral success have long cited the growing Latino population in the country. But former Vice President Joe Biden's performance in heavily Latino areas of key states has concerned members of his party — and may have cost him Electoral College votes, according to groups and activists working to mobilize Latino voters.

Nationally, Biden appears to have gotten support from roughly twice as many Latino voters as President Trump, but that support looked very different depending on where you looked in three key states with large Latino populations.

Democrats were pleased with their performance in Arizona, where The Associated Press awarded Biden the state's 11 electoral votes early Wednesday morning, while anxiety ran high about the results in Florida, where President Trump's strength with conservative Cuban American voters helped secure him that state's 29 electoral votes, according to AP. And while Texas was a long shot for Biden, Democrats had seen opportunity in the explosive growth in the state's Latino population.

During a post-election virtual press conference on Wednesday, leaders from groups aimed at mobilizing Latino voters expressed frustration that the votes of Latinos were not more aggressively pursued, even as they cheered record levels of turnout among Latinos in some key states.

Many Latino Men Are Supporting President Trump This Election

Domingo Garcia, president of the League of United Latin American Citizens (LULAC), said that the Biden campaign missed an opportunity in Florida and Texas.

"The Democrats cannot take Latinos for granted. I think Biden missed a grand opportunity to have been able to carry both Florida and Texas," he said. "If he had just invested in the Latino community more, if he had delivered the correct message. The numbers that we've seen out of Miami-Dade is he got 250,000 less Latino votes than Hillary Clinton got." 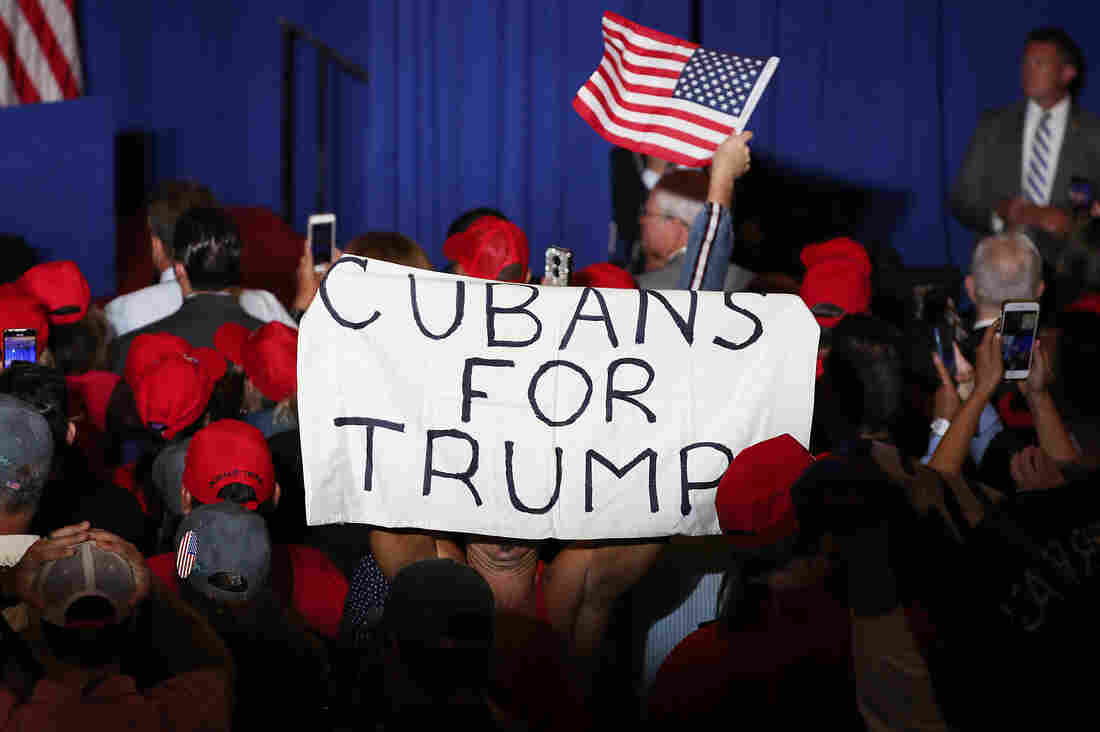 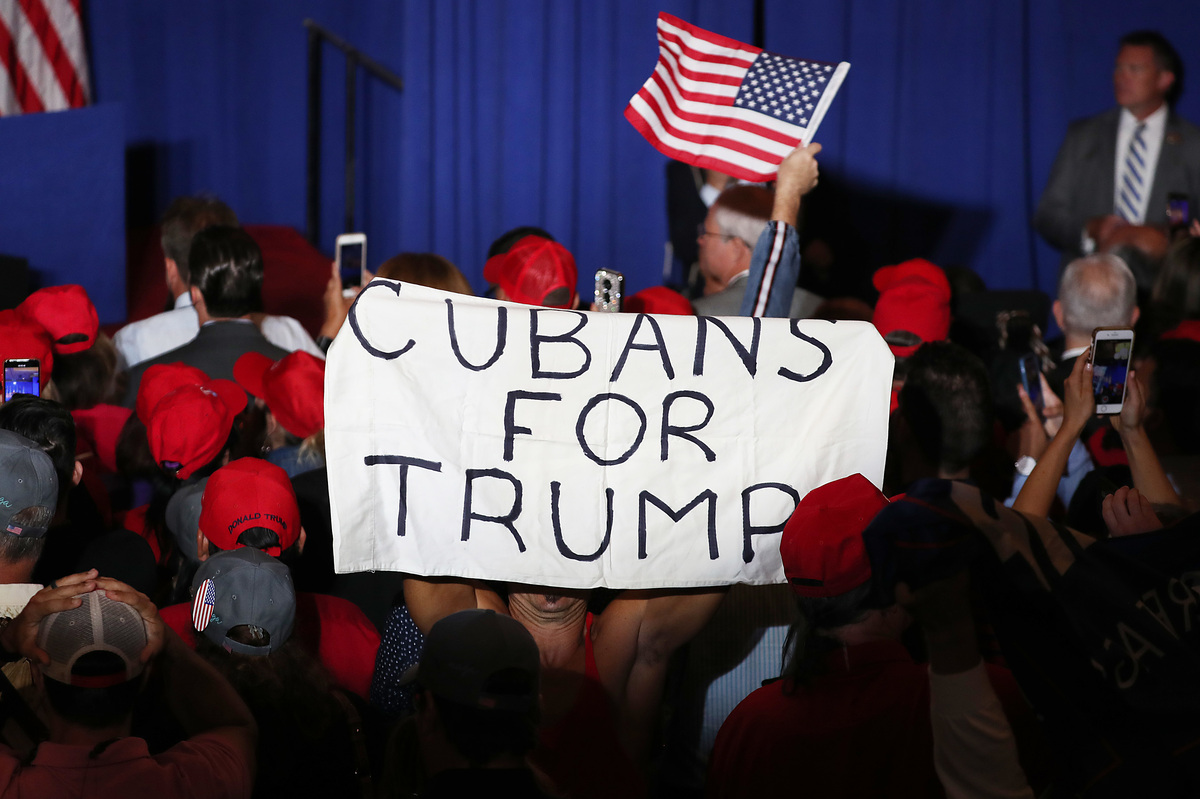 Leaders in the Latino community have repeatedly stressed the diversity and complexity of the Latino vote, ranging from conservatives with more traditional social views to young liberals. There are first-generation citizens and families who have been in the United States for decades.

President Trump's reelection campaign has aggressively courted Latino voters in Florida for years, particularly conservative Cuban Americans, in an effort to offset likely losses among suburban voters and seniors. Trump won a significant majority of Cuban American voters in Florida, as Republican attacks on Joe Biden and Democrats as "socialists" have resonated.

While Trump won over Cuban Americans across the state, Biden's campaign won the other segments of the state's Latino electorate. But Biden's support among Florida's Latinos fell short of the support that Hillary Clinton carried them with in 2016.

Trump Asks For Wisconsin Recount, Though It's Unlikely To Change Outcome

Results Still Unclear And 5 Other Takeaways From Election Night 2020

Four years ago, Clinton won Miami-Dade County, the state's largest county where nearly 7 out of every 10 residents are Hispanic, by 30 percentage points, despite losing the state. This year, Biden won it by just seven points.

"We just saw Donald Trump increase his support with the Cuban American vote," she said. She defended the campaign's Latino voter outreach program both in Florida and nationally, citing strong Latino support in states like Arizona and Nevada.

Democrats also had high hopes to turn Texas blue, due to a combination of Democratic breakthroughs in the suburbs and demographic change that they believed benefitted them, including explosive growth in the state's Latino population. Democrats in the state had been focused heavily on the Rio Grande Valley near the southern border with Mexico, but they ultimately came up short.

Garcia and others pointed to Trump's victory in Zapata County, just north of the Rio Grande Valley, where voters had overwhelmingly backed the Democratic candidate in the past two presidential elections.

"It went from Hillary to Trump. Why? Because the issues of law and order are impacting Latinos quite a bit," Garcia said. "For example, a lot of the border patrol, law enforcement are heavily Latino in the Rio Grande Valley. So when you are talking about defunding the police, and you don't stand up to those types of rhetoric, then it leaves an opening for Republicans to come in and take advantage of that." That's despite the fact that Biden vociferously opposed defunding the police, something that has support in the Democratic base.

Biden's strength in Arizona was in Maricopa County, which includes Phoenix and its suburbs. Biden's campaign focused its efforts there, and drove up turnout among Latinos there, who are largely of Mexican origin. Strategists say that they believe Latinos younger than 30 to have been decisive in that state.

The Trump campaign also worked to win over Latinos in this state, particularly Latino men, and the president was in the state in the closing days of the election, holding rallies despite the coronavirus pandemic.