Accessibility links
Trump Wants A Recount In Wisconsin. How Would It Work? Wisconsin does not have automatic recounts, but a losing candidate can file a sworn petition requesting one if the margin of victory is less than 1%. Democrat Joe Biden leads by roughly 21,000 votes. 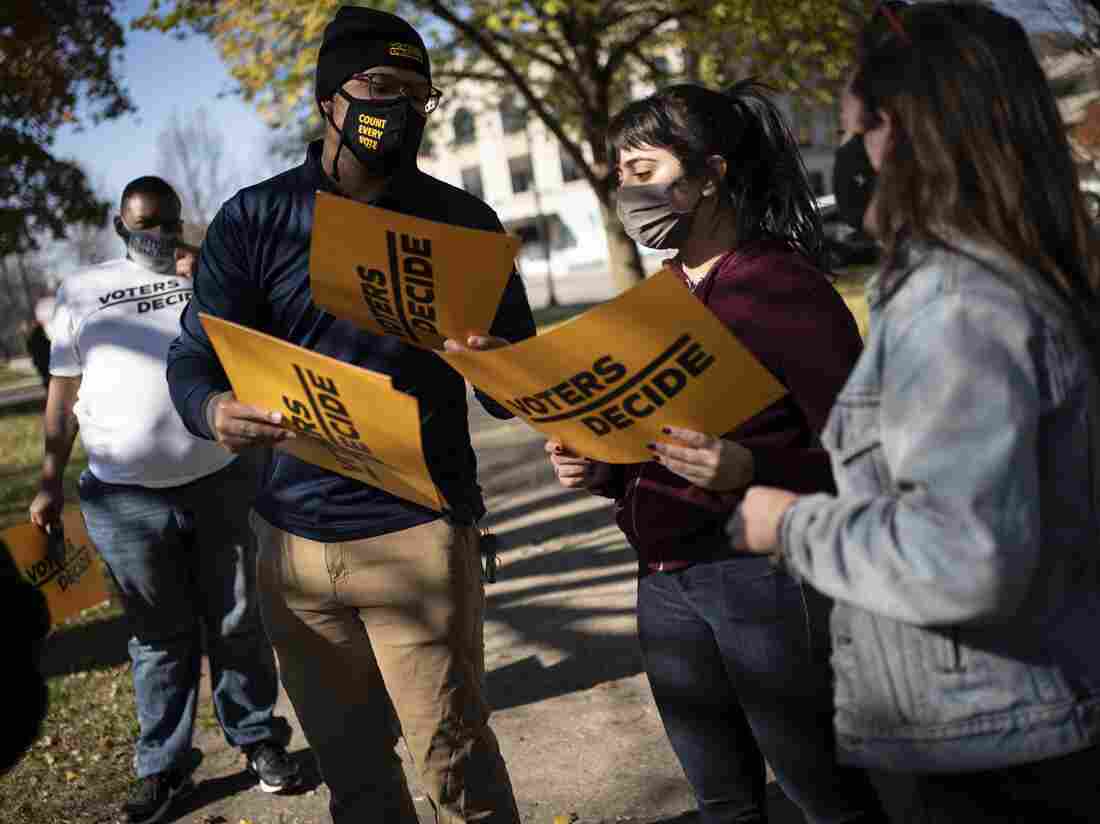 People gather with signs that read "Voters Decide" at the Civic Center Park while waiting for the results of election in Kenosha, Wis., on Wednesday. Wong Maye-E/AP hide caption 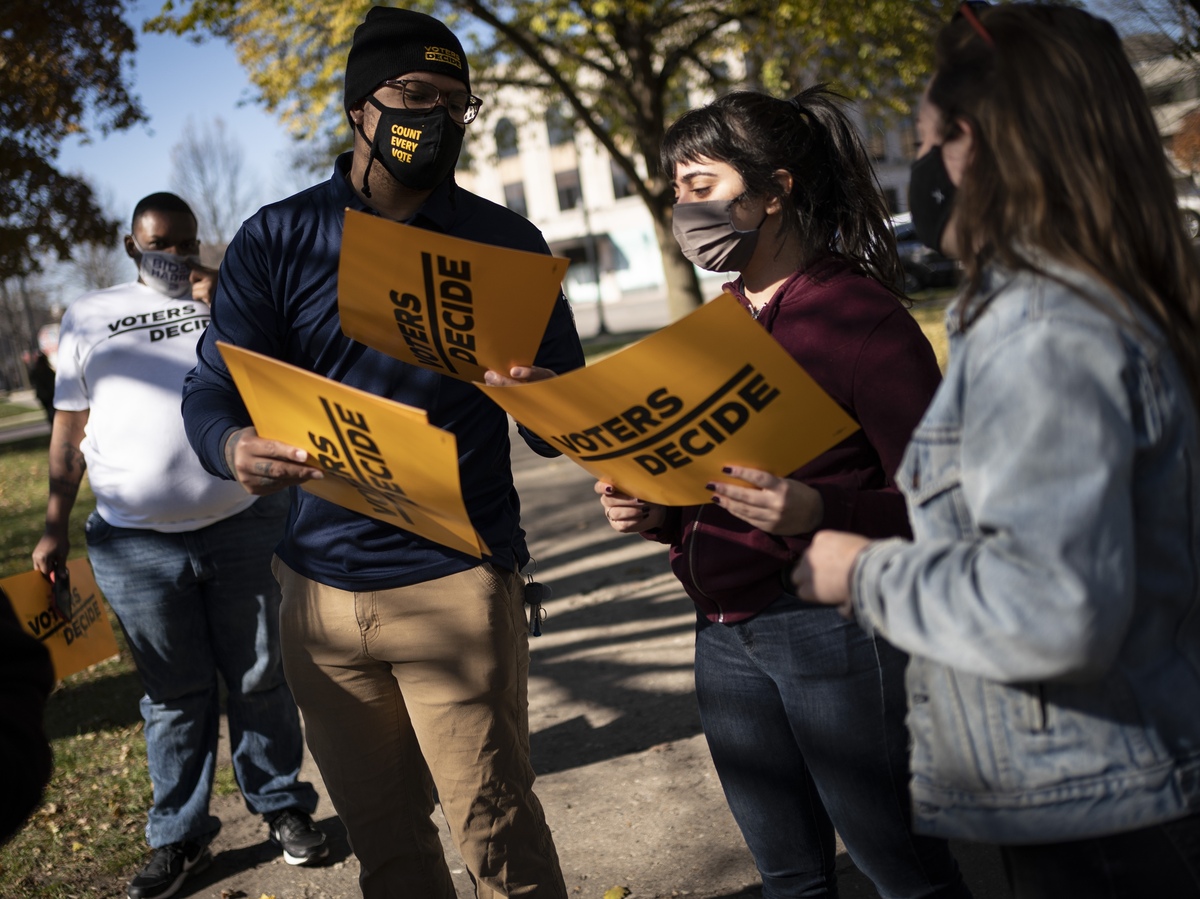 People gather with signs that read "Voters Decide" at the Civic Center Park while waiting for the results of election in Kenosha, Wis., on Wednesday.

Not long after The Associated Press and other news outlets declared Wednesday that Democrat Joe Biden had won Wisconsin's 10 electoral votes, the Trump campaign announced it would ask for a recount in the state.

The margin separating Biden and Trump in what is one of the nation's most contested swing states is roughly 20,000 votes, or less than 1%. It was absentee ballots in the cities of Milwaukee, Green Bay and Kenosha, added to county totals Wednesday morning, that appear to have put Biden on top.

Wisconsin was part of the so-called "blue wall" that Trump shattered last election cycle, when he narrowly won the state by less than 23,000 votes in 2016.

What We Know About The Latino Vote In Some Key States

If there's a recount, the Trump campaign will pay

The state does not have automatic recounts, however under Wisconsin law, a losing candidate can file a sworn petition, along with a filing fee.

Should the Trump campaign follow through on its promise to call for a recount, it will be on the hook to pay for it. Under rules enacted by a Republican legislature and governor a few years ago, the state will only pay for a recount if the margin of victory is .25% or less.

The Trump campaign said Wednesday there had been "reports of irregularities in several Wisconsin counties," which it said cast doubt about the validity of the ballots cast.

The campaign later clarified, without providing evidence to support their claim, that some ballots in heavily Democratic Milwaukee County had been "cured" in red pen, arguing that poll workers — and not voters themselves — "corrected or added information to the ballot itself," spokesman Tim Murtaugh said.

"We estimate that 15-20% of absentee ballots in Milwaukee County were tainted in this manner," Murtaugh said. "This is also only an estimate because our legal volunteers were prevented from having meaningful access all of the time." 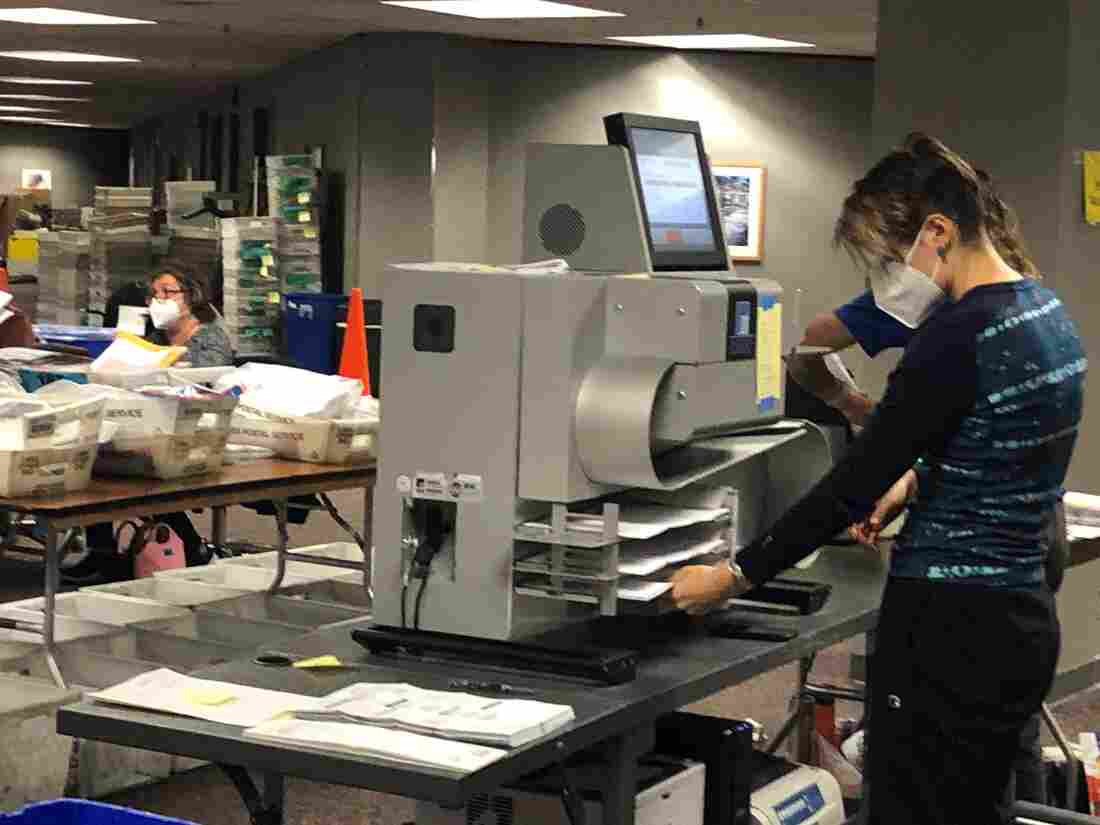 Election workers in Milwaukee are seen feeding absentee ballots into tabulating machines late Tuesday night. The state's 10 electoral votes were awarded to Democrat Joe Biden. But the Trump campaign signaled they will call for a recount. David Schaper/NPR hide caption 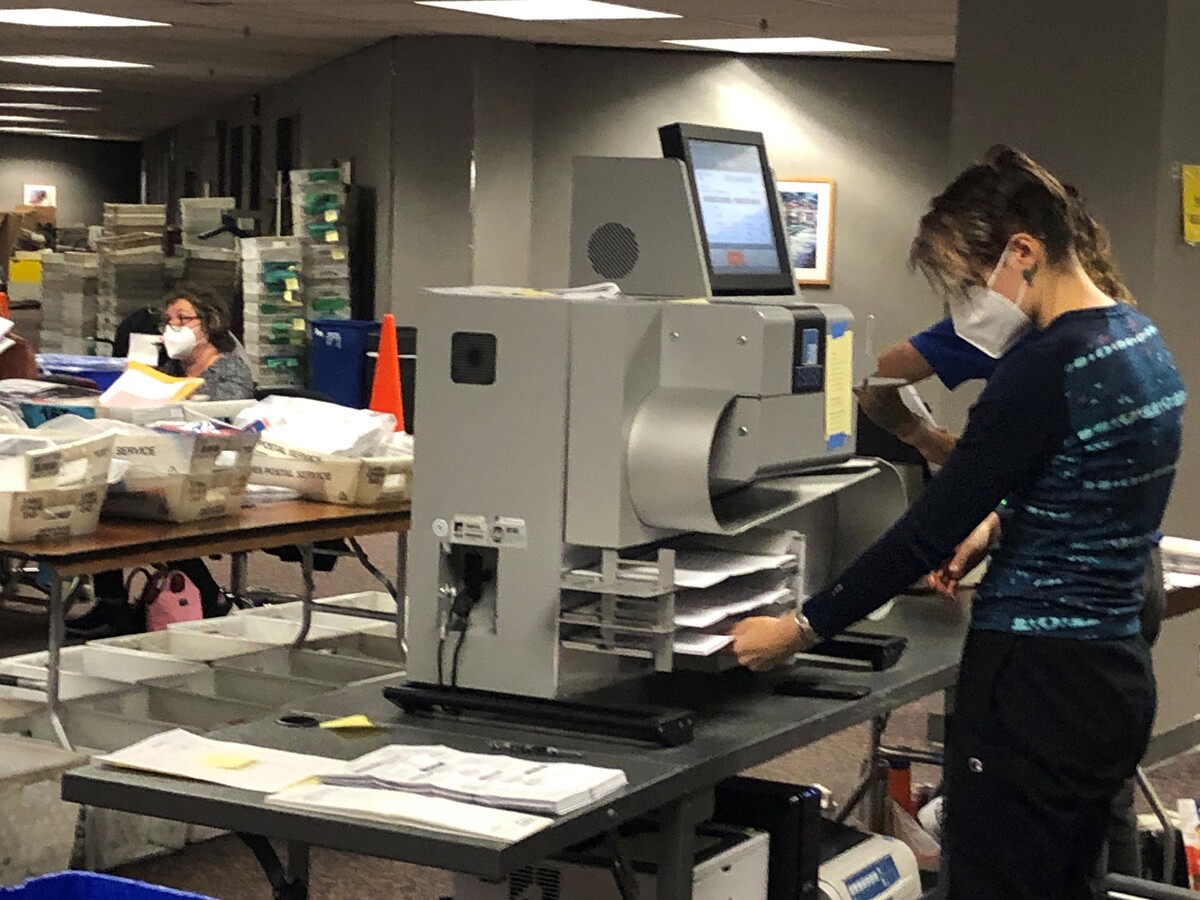 Election workers in Milwaukee are seen feeding absentee ballots into tabulating machines late Tuesday night. The state's 10 electoral votes were awarded to Democrat Joe Biden. But the Trump campaign signaled they will call for a recount.

But Wisconsin's top elections official, Meagan Wolfe, said the voting and ballot counting process is open and transparent, and bristled at the suggestion of widespread election fraud.

"It's insulting for our local election officials to say that yesterday's election was anything but an incredible success," Wolfe told reporters in a news conference over Zoom Wednesday.

She added the integrity of Wisconsin's election system is "the result of years of preparation and meticulously, carefully following the law."

Wisconsin has experience with recounts

The Trump campaign won't be able file a recount petition until Wisconsin certifies its election results, which are due by Dec. 1.

The Badger State is no stranger to presidential recounts, having conducted them in three previous White House contests: 2000, 2004 and 2016.

As Wisconsin Public Radio points out, previous recounts have changed a handful of votes, but not the outcome of elections.

That recount, WPR reports only changed roughly 1,500 votes out of some 3 million cast. In total, Trump gained just 131 more votes during the recount over the Democratic nominee, Hillary Clinton.

The recount took more than a week; involved hundreds of election workers, observers and campaign attorneys; and cost $3.5 million, which was paid for by Stein's campaign, according to WPR.

Former Wisconsin Gov. Scott Walker, a Republican, tweeted early Wednesday that he was skeptical a recount would swing the state in Trump's favor. 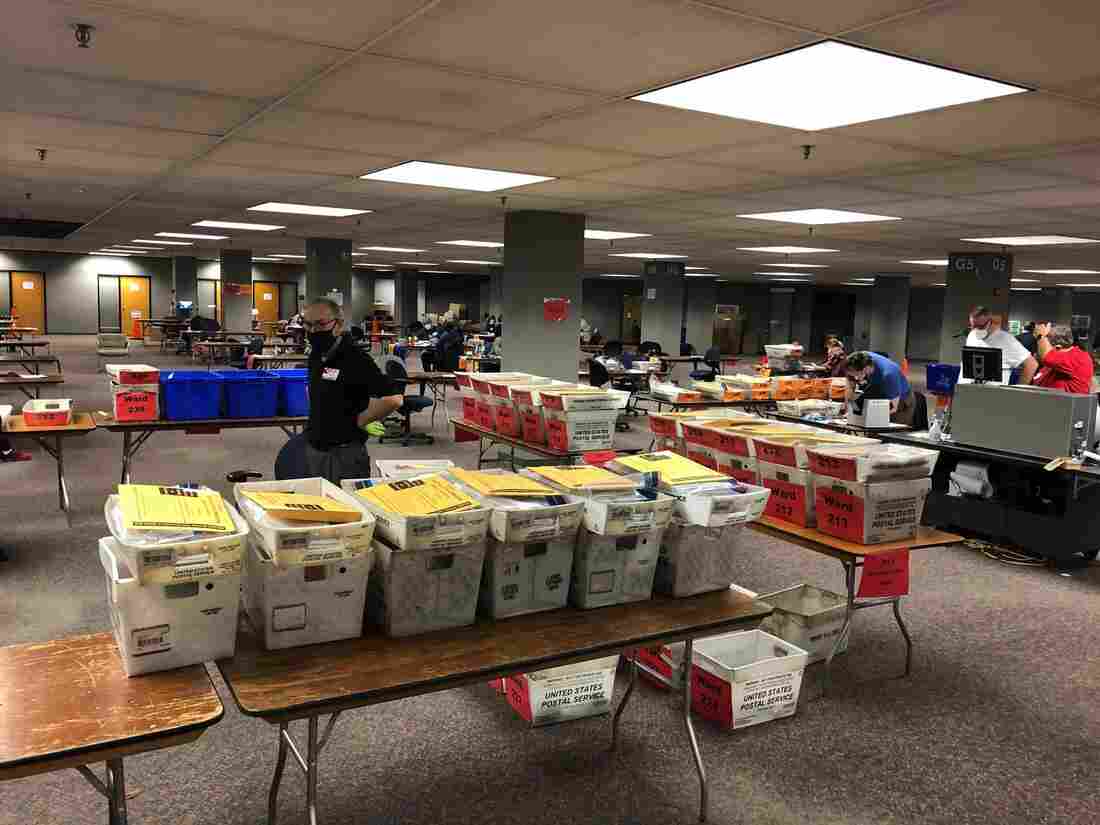 Crates full of absentee ballots that were mailed in or placed into secure ballot drop boxes await to be processed by election officials in Milwaukee on Tuesday. David Schaper/NPR hide caption 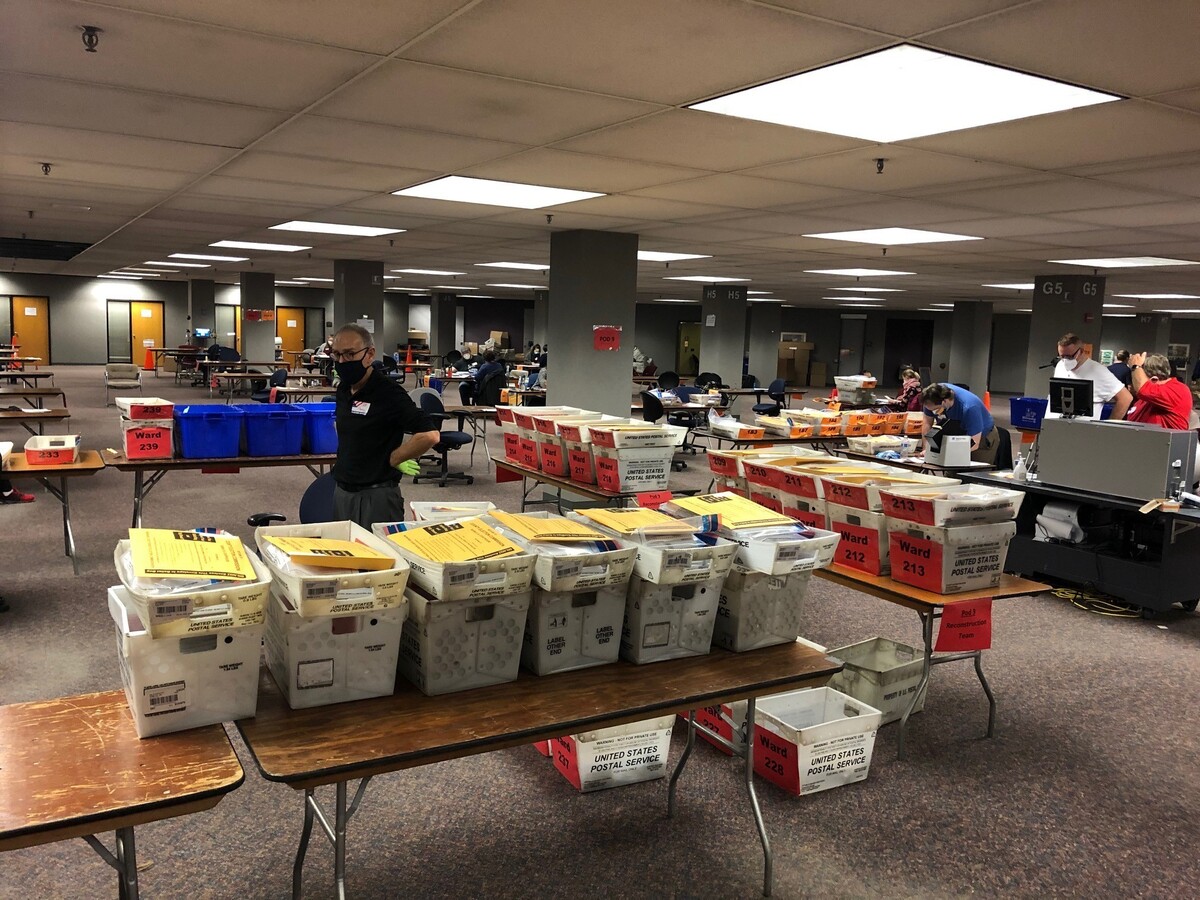 Crates full of absentee ballots that were mailed in or placed into secure ballot drop boxes await to be processed by election officials in Milwaukee on Tuesday.

How Wisconsin tallies its ballots

Republicans are raising questions about what they see as late-arriving votes that erased what appeared to be a solid lead for President Trump.

But many are likely to have been some of the earliest ballots cast, as they were absentee ballots mailed in, dropped off at secure ballot boxes, and ballots cast early in-person at polling places in the days and weeks before Election Day.

Under Wisconsin law, those ballots could not be opened and counted until Tuesday.

In many smaller cities and towns, those absentee ballots are tallied at the municipal clerk's office with the votes cast on Election Day itself.

But in 39 larger communities, including Milwaukee, Madison, Green Bay and other cities, the votes are tallied at a separate central count facility. The process of tabulating the votes can be long and slow.

Milwaukee, for example, had almost 170,000 votes that had to be counted this way; statewide some 2 million voters cast their ballots early, by mail or absentee.

State law prohibits ballots returned after 8 p.m. Tuesday night from being accepted, which was upheld by the U.S. Supreme Court last week, so no late ballots were counted, according to Wolfe, the Wisconsin Elections Commission administrator.