Accessibility links
'The Book Collectors' Centers On Hope And Connection Amid Tragedy Journalist Delphine Minoui tells the true tale of a young man who refused to escape the terrors of Assad's regime in Syria, instead working with friends to make a library — a beacon of hope. 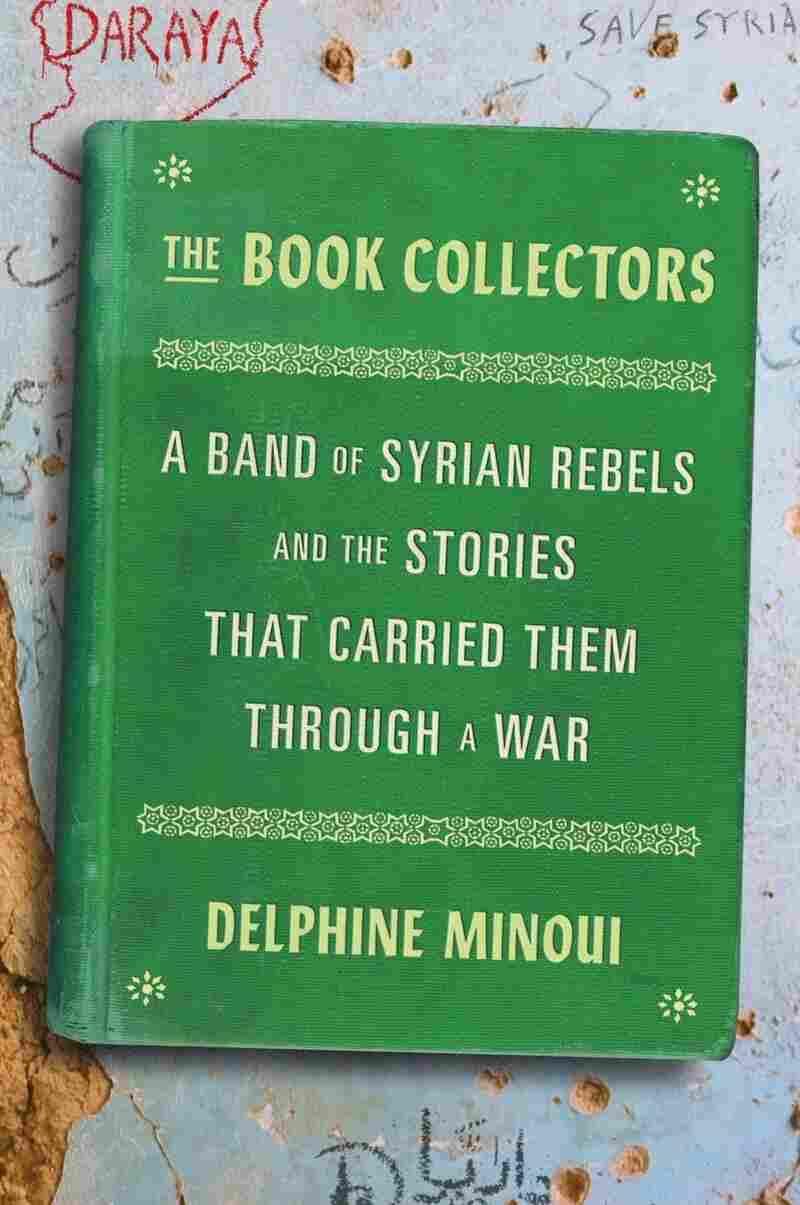 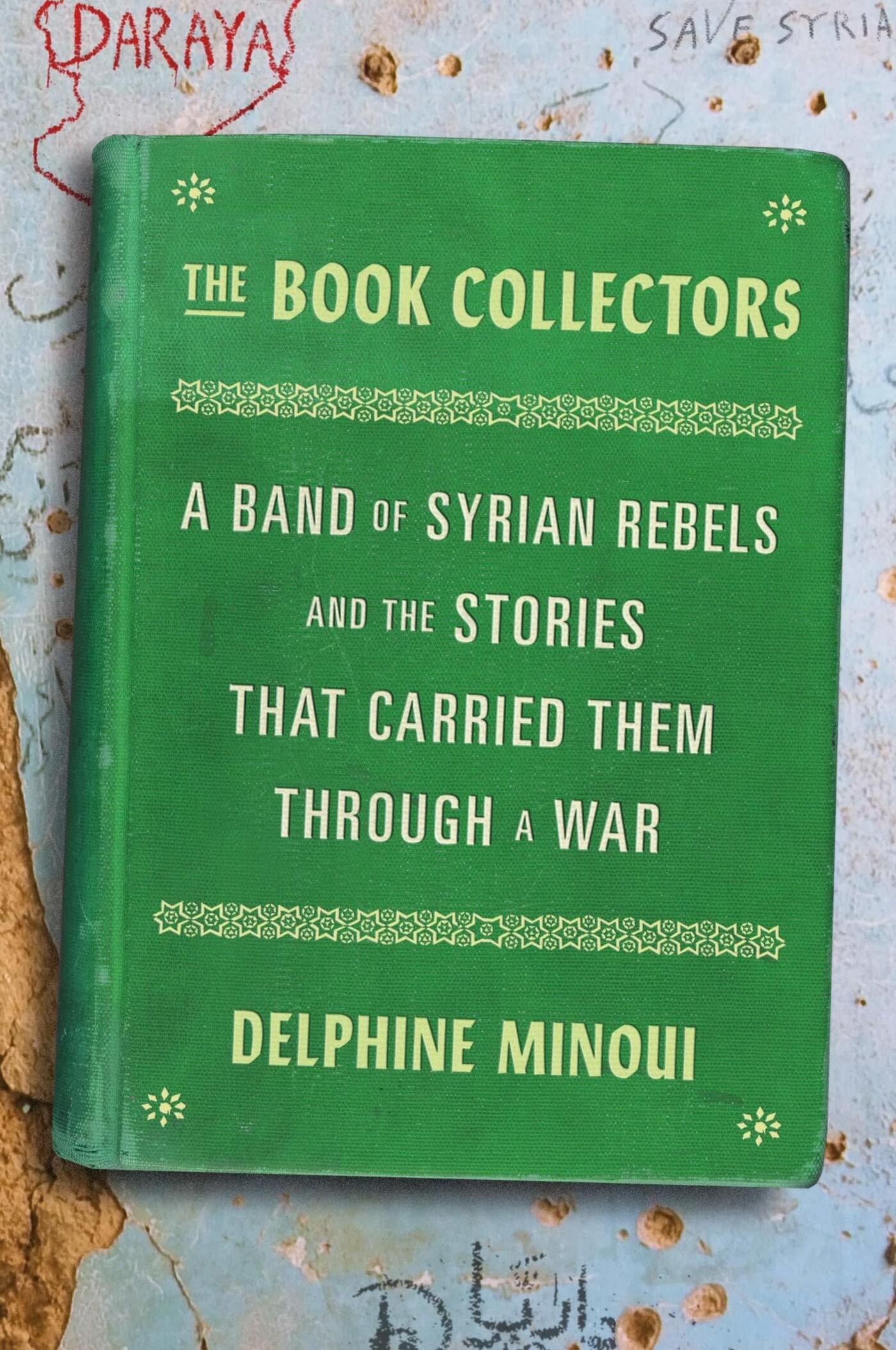 Brutality grinds on in Syria, but other horrific news drowns it out. In the cacophony of current events, it is heartening to remember that heroes emerge in unpredictable places.

The Book Collectors, by Delphine Minoui, translated from French by Lara Vergnaud, depicts the savagery of Syrian President Bashar al Assad's regime contrasted with that life-saving symbol of civilization: a library.

Minoui, based in Istanbul, found her subject in a photo posted on Facebook in 2015 — "two men in profile, surrounded by walls of books.... They're young, in their twenties, one sporting a hooded sweatshirt, the other with a baseball hat secured firmly on his head.... A fragile parenthesis in the midst of war."

The caption to the photo read: "secret library of Daraya."

As a prize-winning Le Figaro Middle East correspondent, Minoui had taken a keen interest in Daraya, a suburb of Damascus and the cradle of the 2011 peaceful Syrian uprising. Daraya had under siege by Assad's forces since 2012. Through expert sleuthing, Minoui tracked down the photographer, Ahmad Muaddamani, one of the founders of the library.

It is October 2015. Muaddamani describes a city that is fire and dust. Amid the tumult, thousands of books have been saved and reassembled in a "refuge accessible to all of Daraya's residents." Muaddamani celebrates his cultural heritage against incessant bombing. Books are "weapons of mass instruction."

Over the following months, Muaddamani and friends recount their story to Minoui in sporadic bursts interrupted by spotty internet, explosions, and power outages. Minoui braids Muaddamani's riveting narrative with poetic insights gleaned from years of professional and personal experience.

Muaddamani was 19 in 2011 and refused to join his family who had escaped to a neighboring town. In late 2013, his friends discovered books in a destroyed house. They soon realized there were more books buried in the city's wreckage. They found the basement of an abandoned building near the front line to house the books. In short order, they had 15,000 volumes.

Online, Minoui comes to know Daraya's residents. She meets library director Abu el-Ezz in a make-shift clinic where he's suffering the effects of a barrel bomb.

Through her fuzzy computer screen, she meets library patrons who describe love poems by Nizar Qabbani, their newfound passion for Shakespeare and Molière, and novels from Marcel Proust to J.M. Coetzee. The book that breaks all borrowing records is The 7 Habits of Highly Effective People by Stephen Covey. It is "our compass," Muaddamani says. Minoui comes to understand that the library transports these young Syrian rebels elsewhere.

Her friendship with Muaddamani and compatriots blossoms. Muaddamani is candid about everything from his disaffection with jihad to his concerns over the November 2015 Paris terrorist attacks. "In Daraya, we are by your side against terrorism," he writes. Minoui is deeply moved by this outpouring, from a man who lives under a "rain of bombs."

A month later, Muaddamani writes that the library has been attacked. Explosives ripped out two out of the building's five stories. Books litter the ground "bent, wrinkled, mixed with plaster and broken glass." But not to worry, "Nobody was hit or injured, a miracle!" The attack confirms for Muaddamani how much Bashar al-Assad hates Daraya and "wants us dead."

By February 2016, Muaddamani's city is divided into three levels: "the sky and the helicopters that chased away the stars; the ground, disfigured by bombs; the clandestine basements nestled in the shadow of chaos."

In April, Minoui receives a distress call in the form of a letter signed by 47 women of Daraya. They have no table salt, no food. There is rampant malnutrition and they are cooking soups from spices only. There are no cleaning supplies, no means to keep away disease. Their call for help is answered weeks later, but the convoy contains no food, only health kits, contraceptives, and glucose patches when what they need is sugar.

"Behind the courage of men can be found the suffering of women," Minoui comments.

Muaddamani concludes they can count only on themselves. "The entire world has abandoned us." He takes comfort in the words of Mahmoud Darwish, a revered Palestinian poet who suffered the 1982 siege of Beirut.

By June, Minoui has lost touch with her correspondents. She is frantically worried. She learns in bits and snatches that Muaddamani's friend Shadi has been severely wounded and his friend Omar killed. In the end, Muaddamani and company have no choice but to abandon their beloved hometown.

The Book Collectors is about hope and connection against unspeakable violence, deprivation, and tragedy. It is a meaningful addition to the literary subgenre that covers books and libraries. I loved Azar Nafisi's Reading Lolita in Tehran and Pat Conroy's My Reading Life. I couldn't put down Susan Orlean's The Library Book, a gripping history of the Los Angeles Central Library borne from the ashes of a catastrophic 1986 fire.

Libraries are islands of calm and nourishment in a turbulent world. As the epigraph by Mazen Darwish, a Syrian human rights activist puts it, no jail "can imprison the free word."