Accessibility links
Kosovo's President Hashim Thaci Steps Down To Face War Crimes Charges Hashim Thaci, a senior guerrilla commander during the Kosovo war in the late 1990s, said he had a confirmed indictment from a special court in The Hague. 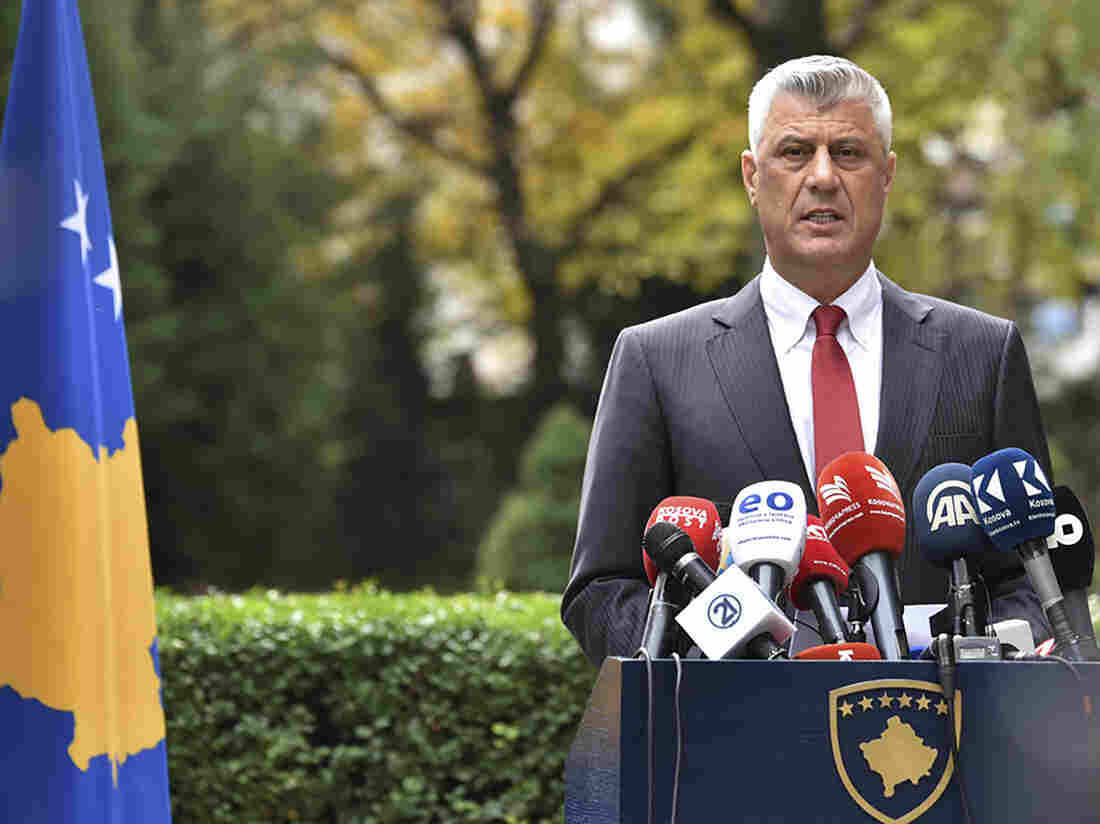 Kosovo President Hashim Thaci announces his resignation Thursday in the Kosovo capital of Pristina. He said he was stepping down to face war crimes charges in The Hague. Visar Kryeziu/AP hide caption 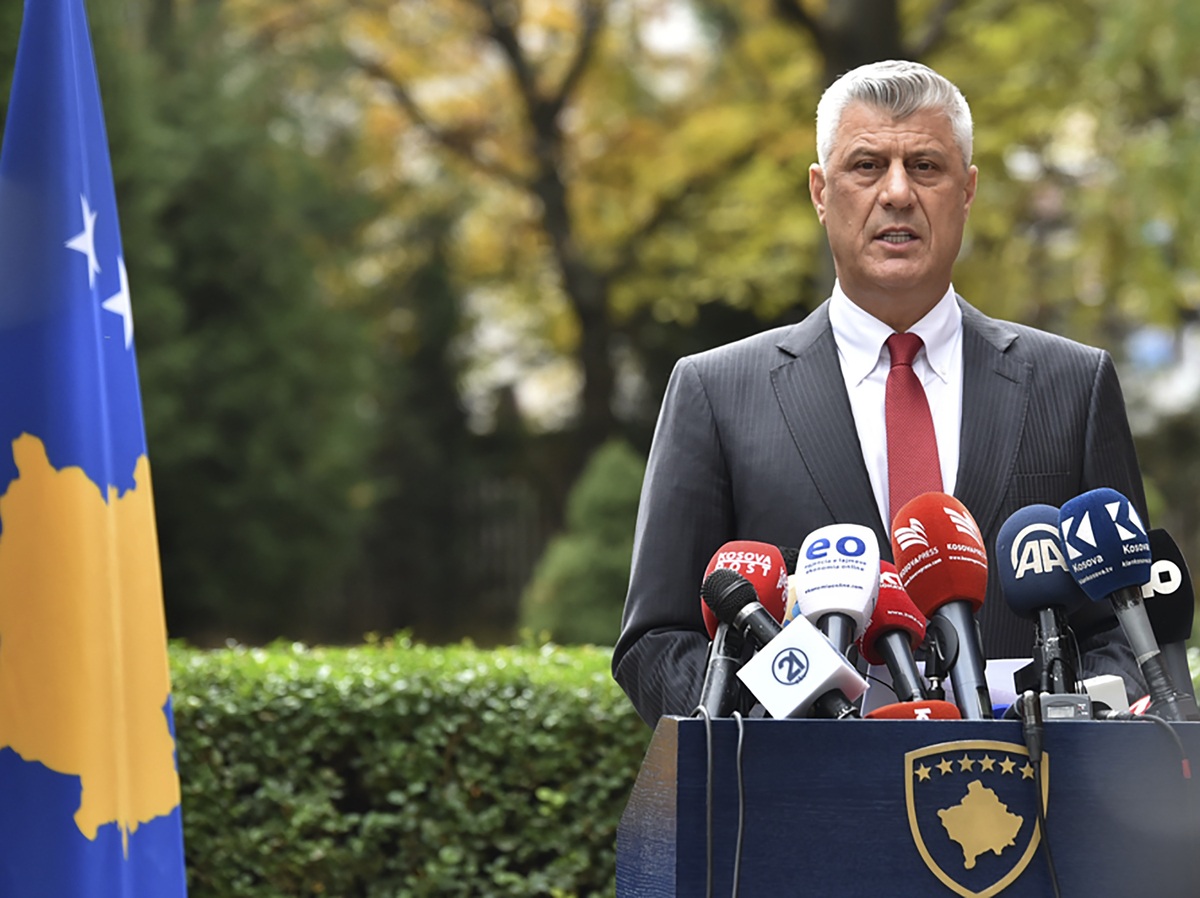 Kosovo President Hashim Thaci announces his resignation Thursday in the Kosovo capital of Pristina. He said he was stepping down to face war crimes charges in The Hague.

Kosovo President Hashim Thaci, who fought in his country's 1998-1999 war for independence from Serbia, has abruptly resigned after a Hague-based special court confirmed that he's been indicted on war crimes charges.

Speaking at a news conference in the Kosovo capital, Pristina, Thaci said he was stepping down "to protect the integrity of the state."

"I resign as of today," he told reporters on Thursday, urging calm and "political and civic unity."

Thaci, a fixture in Kosovo's politics for 20 years, will face charges at the Kosovo Specialist Chambers in The Hague. The tribunal was set up in 2015 to handle allegations of war crimes stemming from the war that ended in 1999 after U.S.-led NATO troops bombed Serbia. Kosovo declared itself a nation in 2008, but Serbia still claims Kosovo as its own. Serbia's allies have blocked Kosovo from joining the United Nations, NATO and the European Union. 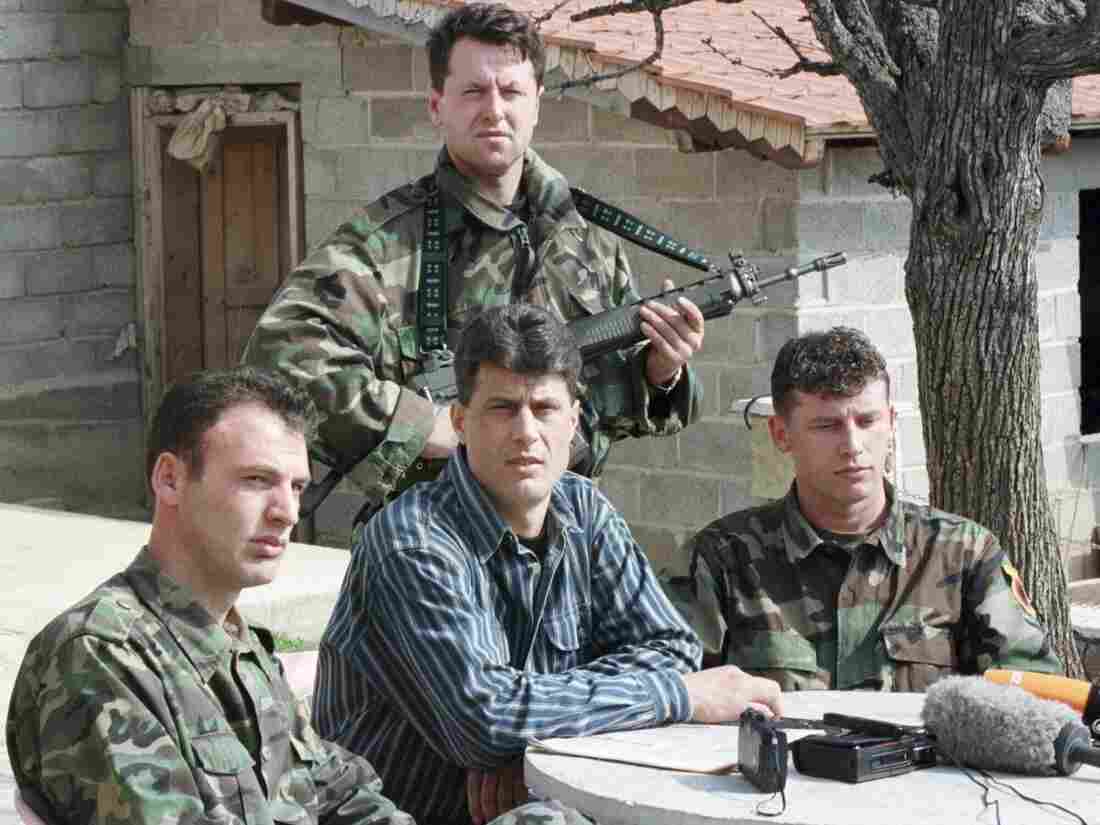 Thaci, center, then a senior commander in the Kosovo Liberation Army guerrilla group, addresses a news conference in 1999 in a secret location in central Kosovo. Visar Kryeziu/AP hide caption 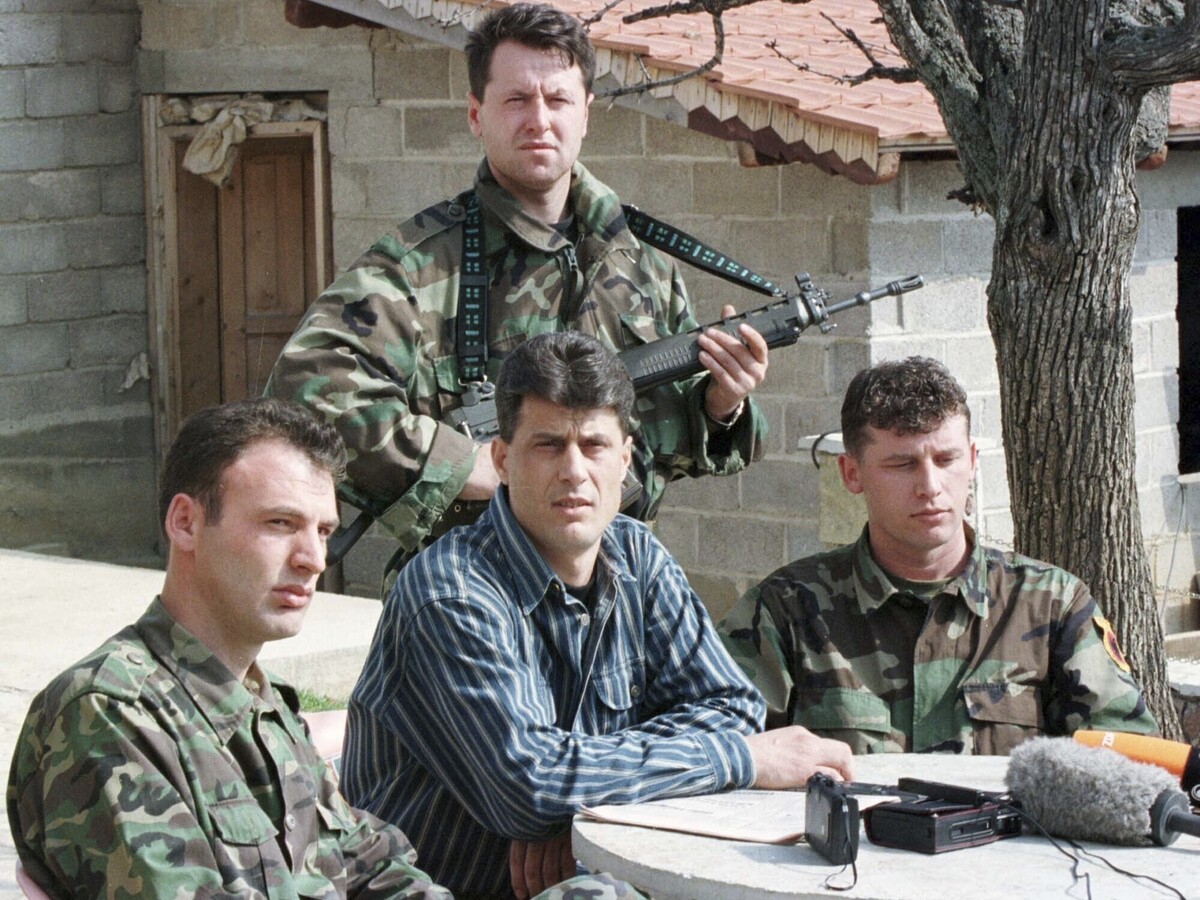 Thaci, center, then a senior commander in the Kosovo Liberation Army guerrilla group, addresses a news conference in 1999 in a secret location in central Kosovo.

Thaci was a senior commander in the Kosovo Liberation Army guerrilla group. After the end of the war in 1999, he was prime minister of Kosovo and was elected president in 2016.

In July, a month after the indictment was first announced, he met with the prosecutors to discuss the allegations that include "a range of crimes against humanity and war crimes, including murder, enforced disappearance of persons, persecution, and torture," according to a statement by the court.

The indictment alleged that Thaci and several others "are criminally responsible for nearly 100 murders ... of known victims of Kosovo Albanian, Serb, Roma, and other ethnicities and include political opponents," the court said.

In Kosovo, War Rape Survivors Can Now Receive Reparations. But Shame Endures For Many

According to the procedures of the Kosovo Specialist Chambers, after charges are filed, they must be confirmed by an independent judge who determines if the allegations raised are well-grounded. Thaci said Thursday he has learned the charges against him were confirmed.

Kadri Veseli, leader of Democratic Party of Kosovo to which Thaci also belongs, released a statement Thursday saying that the same tribunal also indicted him and that he would voluntarily travel to The Hague to turn himself in. A third politician, Rexhep Selimi, a deputy in Kosovo's parliament, also announced his indictment. He said that like Veseli, he would travel to The Hague.

Thaci's resignation follows the arrest and transfer to The Hague on Wednesday of Jakup Krasniqi, a former Kosovo Liberation Army spokesman and former speaker of Kosovo's parliament.

Krasniqi was arrested "pursuant to a confirmed indictment related to war crimes and crimes against humanity, and an arrest warrant and transfer order issued by a Pre-Trial Judge of the Kosovo Specialist Chambers," the tribunal said in a statement. It did not give details about the indictment against him.

After Unprecedented Strains With Longtime Friend U.S., Kosovo Has A New Government

Stephanie van den Berg, a Dutch journalist who hosts a podcast on international war crimes, said the court is controversial in Kosovo, where "all the KLA leaders are veteran politicians."

"It's hugely significant that Thaci turned himself in," she said.

"He has always denied involvement in any crimes and presented himself as a liberator of his people, a peacemaker," she added. "It will be interesting to see how the special court cases against him and others play out because previous cases against Kosovar Albanians were marred by witness intimidation."

In June, Human Rights Watch expressed concern about the protection of witnesses in the case, which it says "has plagued so many war crimes trials of former KLA members, both in Kosovo and at the United Nations' International Criminal Tribunal for the former Yugoslavia."

Vjosa Osmani, the speaker of Kosovo's parliament, will fill in as interim president until lawmakers approve a successor to Thaci.