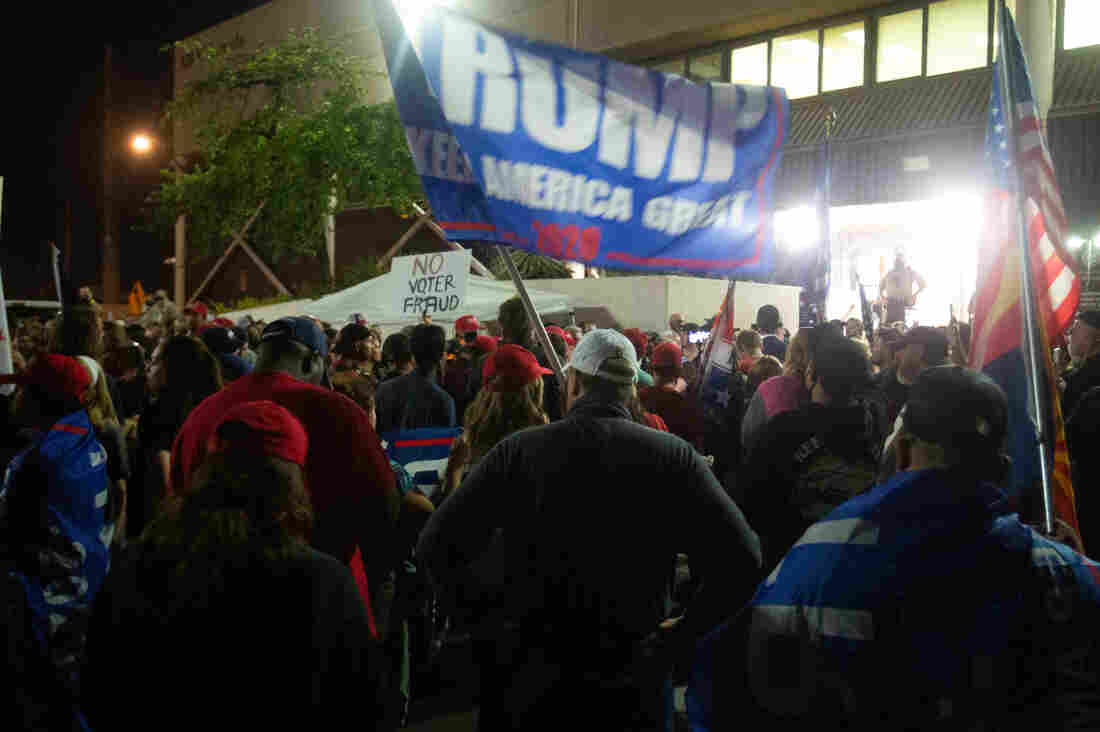 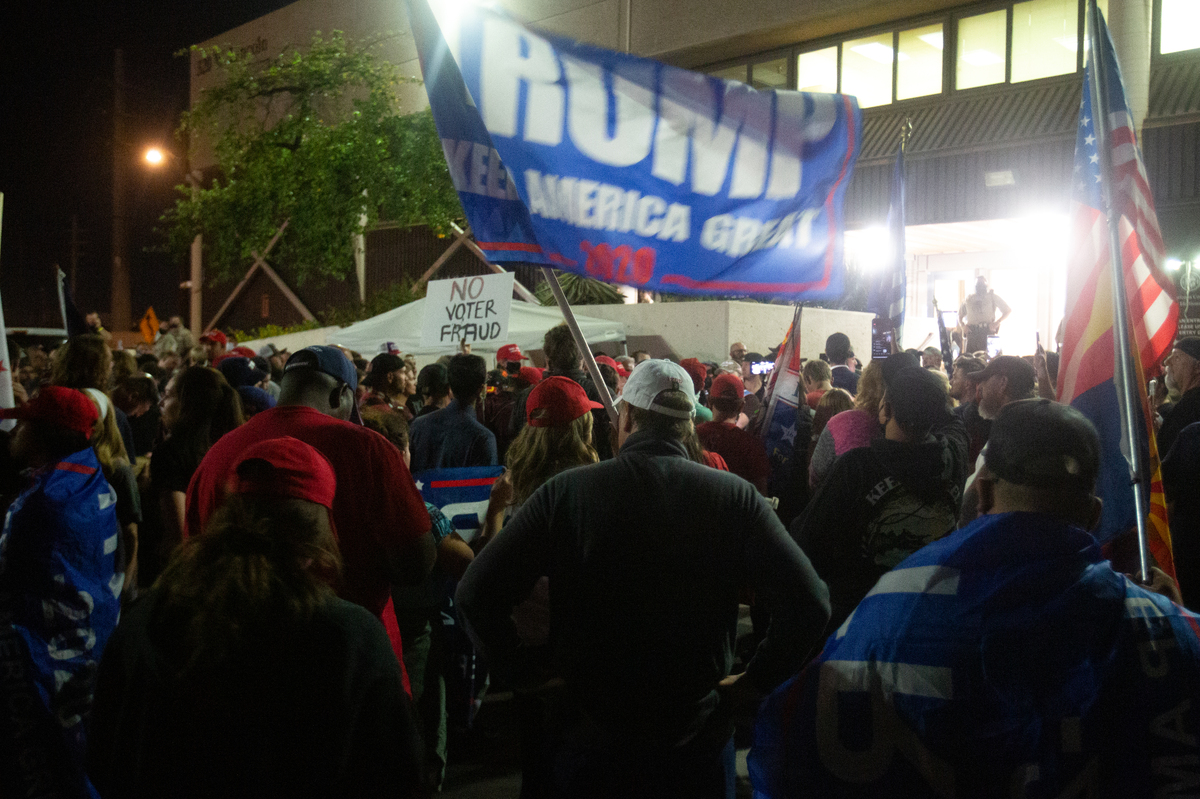 Supporters of President Trump gather to protest election results at the Maricopa County Elections Department office on Nov. 4 in Phoenix.

Domestic terrorism analysts have warned for weeks about the possible triggers of election-related violence: a protracted vote count. Claims of rigging. Rampant disinformation. Protesters and vigilantes.

For all the worry about voter intimidation on Election Day, the aftermath was always the more urgent concern for groups and scholars who track how political disagreements spiral into street violence or extremist mobilizing. Now, the moment they dreaded has arrived, with a contentious vote count plunging the U.S. into an open-ended danger zone.

Increasingly, extremism trackers say, the threat of unrest isn't just from a radical fringe but from ordinary people who are whipped up by partisan, conspiratorial messages. Already, Trump voters are coalescing by the tens of thousands in Facebook groups associated with the hashtag campaign "Stop the Steal"; one group amassed more than 350,000 members before it was removed for spreading disinformation. The group had called for "boots on the ground to protect the integrity of the vote."

In many cases, right-wing organizers are reactivating the same channels they used over the summer to protest pandemic lockdown orders or to form vigilante groups against the perceived threat of militant leftists. After months of arranging pro-Trump convoys and gathering disparate factions under the "Liberate" or "Reopen" banners, organizers have ready conduits for moving grievances to the streets.

"You can see the same thing happening over and over again," said Melissa Ryan, chief executive of Card Strategies, a consulting firm that tracks disinformation. "They try to create this impression that it's people spontaneously showing up to protest because they're angry, but it's the exact opposite. It's the same folks that show up every time, and it's the same groups giving them directives and messaging."

Most right-wing media outlets are spinning a narrative of rampant irregularities, echoing President Trump's attempts to undermine the integrity of the election. The relentless attacks prompted the beleaguered registrar of Clark County, ground zero for the Nevada count, to announce beefed-up security measures for his staff.

"We will not allow anyone to stop us from doing what our duty is and counting ballots," Clark County Registrar Joe Gloria told a news conference.

Some of the most inflammatory language is coming from the White House and Trump himself. Twitter took the extraordinary measure of adding warning labels to several of the president's tweets. Trump repeatedly has suggested that there's something nefarious about the mundane, laborious process of counting an unprecedented number of mail-in ballots in the middle of a pandemic. His supporters also promoted "Sharpiegate," the debunked claim that Trump voters were given Sharpie markers to fill out their ballots with, the idea being that the heavy ink might invalidate them.

When it comes to fueling unrest, "the bully pulpit is going to be one of the main factors," said Brian Levin, director of the Center for the Study of Hate and Extremism at California State University, San Bernardino.

"From what we've been seeing, the sustained nature of the invective, particularly when it's coming from the highest transmitter in the land, can result in multiple spikes," Levin said.

The wild card, Levin added, is that 2020 isn't like previous years. This time, a disputed election is unfolding in a polarized nation that's in the throes of a pandemic and a recession. Usually, Levin said, a burst of political violence is triggered by one big event. He's worried that prolonged uncertainty could bring waves of unrest.

"This is a whole different circumstance because usually the catalytic event has a beginning and end time," Levin said. "This is going to go on for some time."

So far, only small street protests have taken place, drawing activists from both the left and the right in several cities. But the worry is that those could spiral once the vote is called. A Trump loss, Levin said, could help reunite the mishmash of his supporters who came together over the summer to fight lockdowns.

"We not only had small-business people and outdoor enthusiasts, as well as anti-vaxxers, but we also had QAnon folks, we also had Second Amendment insurrectionists and even some racists get into this milieu," Levin said.

"When we see groups and movements that have their issues or connections to the mainstream severed or eroded," he warned, "they tend to act more as an insurgency."

In an October report about the risk of domestic terrorism, the Center for Strategic and International Studies concluded that "in the event of a Democratic presidential victory, the threat could involve specific attacks by radicalized white supremacists, militias, and other related individuals."

A roundup of memes and social media posts compiled by MEMRI, a group that monitors extremist messaging, shows hate groups and neo-Nazi commentators promoting racist and anti-Semitic conspiracy theories about the election. In some cases, the posts amount to clear calls for violence.

But analysts emphasized that the threat is no longer confined to the far-right extremist world — it's much closer now.

"I fully anticipate that we're going to see some events in the coming weeks that are going to be troubling and unfortunate. And they're not all going to be committed by individuals that are neo-Nazi skinheads that have dedicated their lives to this," said Michael Jensen, a researcher at the University of Maryland who led a new study on hate crime offenders. "They're going to be committed by seemingly regular folks that have gotten kind of caught up in the madness of the moment around the election."