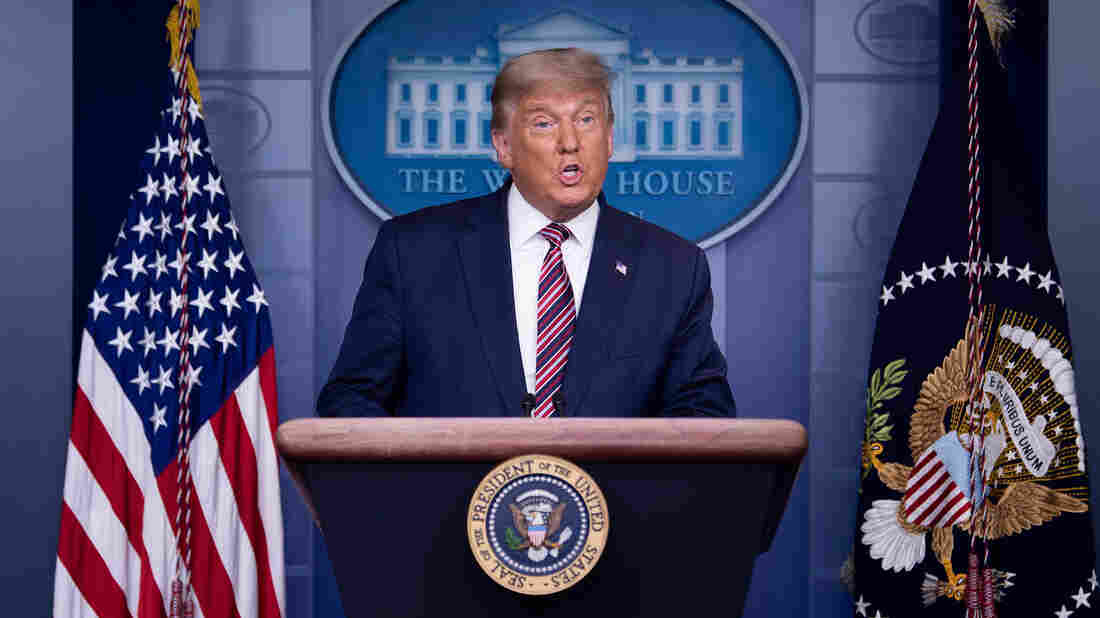 President Trump speaks in the Brady Briefing Room at the White House on Thursday as the presidential election remains tight with Democratic nominee Joe Biden ahead in the electoral count. Brendan Smialowski/AFP via Getty Images hide caption 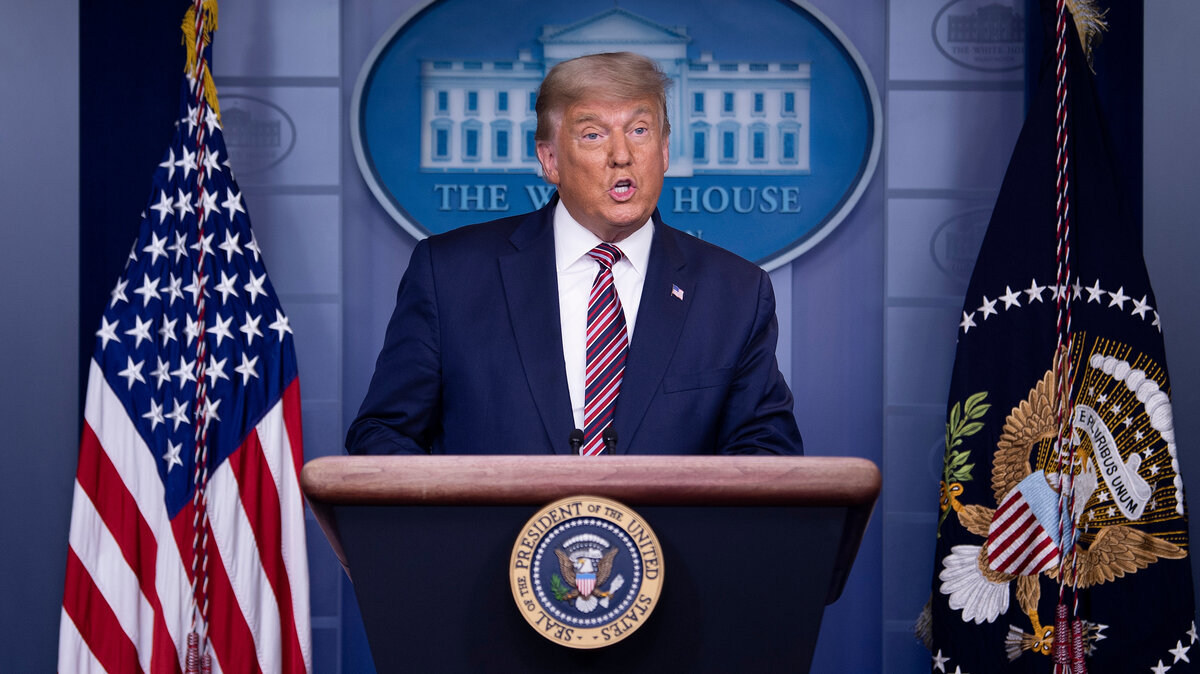 President Trump speaks in the Brady Briefing Room at the White House on Thursday as the presidential election remains tight with Democratic nominee Joe Biden ahead in the electoral count.

President Trump on Thursday evening made his first public remarks since the late-night hours following Election Day, falsely claiming that he would win "easily," save for what he baselessly referred to as fraud by Democrats and the media.

"If you look at the legal votes, I win very easily," Trump told reporters from the White House briefing room.

"They're trying very obviously to commit fraud," he said, speaking particularly harshly about Philadelphia and Detroit.

Votes from the county that includes Philadelphia have helped the Democratic nominee Joe Biden close Trump's lead in the state of Pennsylvania. The Associated Press has called the state of Michigan, and its 16 electoral votes, for Biden.

The president left after speaking for several minutes and did not take reporter questions.

In his remarks, Trump railed against the process of mail-in voting, which saw a significant uptick this election cycle as a result of the coronavirus pandemic. He baselessly claimed that the process of counting mailed-in ballots had been tainted and complained that many of the absentee votes had been cast for Biden. (Read our fact check about mail-in voting security here.)

"I've said very strongly that mail-in ballots are going to end up being a disaster," he said. "It's getting worse and worse every day."

Trump complained repeatedly that Republican observers had not gained sufficient access to vote counting locations, which the campaign has filed lawsuits over in Michigan, Nevada and Pennsylvania.

However, the suits in Michigan and Nevada were quickly dismissed by state courts. A state court judge in Pennsylvania affirmed on Wednesday that observers have a right to be within 6 feet of the ballot-counting operation, but a federal judge threw out a prospective lawsuit on Thursday in which Trump's campaign sought to halt vote counting in Philadelphia.

Further, Trump on Thursday misleadingly claimed that observers were excluded from the counting site in Detroit; city officials say Republicans were not excluded and that there were Republican observers, but that coronavirus-related capacity constraints did not permit everyone who wanted to be an observer into the room.

Trump said he expects "a lot of litigation" to contest the election's results.
"We can't be disgraced by having something like this happen," he said on Thursday. "There's been a lot of shenanigans, and we can't stand for that in our country."

Noting that only a handful of states remain uncalled in the race, Trump falsely claimed, "The voting apparatus of those states are run in all cases by Democrats." In fact, the secretaries of state in Georgia and Nevada — two of five states where a clear winner has not yet been determined — are Republican. In the case of Georgia's Brad Raffensperger, Trump actually endorsed him for the office in 2018.

Earlier in the day, Democratic nominee Joe Biden made brief remarks reaffirming his belief that he would ultimately be declared the winner of the presidency but urged patience as votes continue to be counted.

"In America, the vote is sacred," he said. "It's how the people of this nation express their will. And it is the will of the voters — no one, not anything else — that chooses the president of the United States of America. So each ballot must be counted."

He added: "Democracy is sometimes messy. It sometimes requires a little patience as well. But that patience has been rewarded now for more than 240 years."

Biden's comments come as local poll workers continue to tally votes and as the nation awaits an answer on who will be in the White House for the next four years.

Biden holds a lead in electoral votes over Trump, but a handful of critical swing states remain to declare their respective winners.