Accessibility links
Colorado Votes To Join The National Popular Vote Compact What would a national popular vote mean? Instead of watching days of livestreams of swing state poll workers, the result would have been settled on Tuesday night. 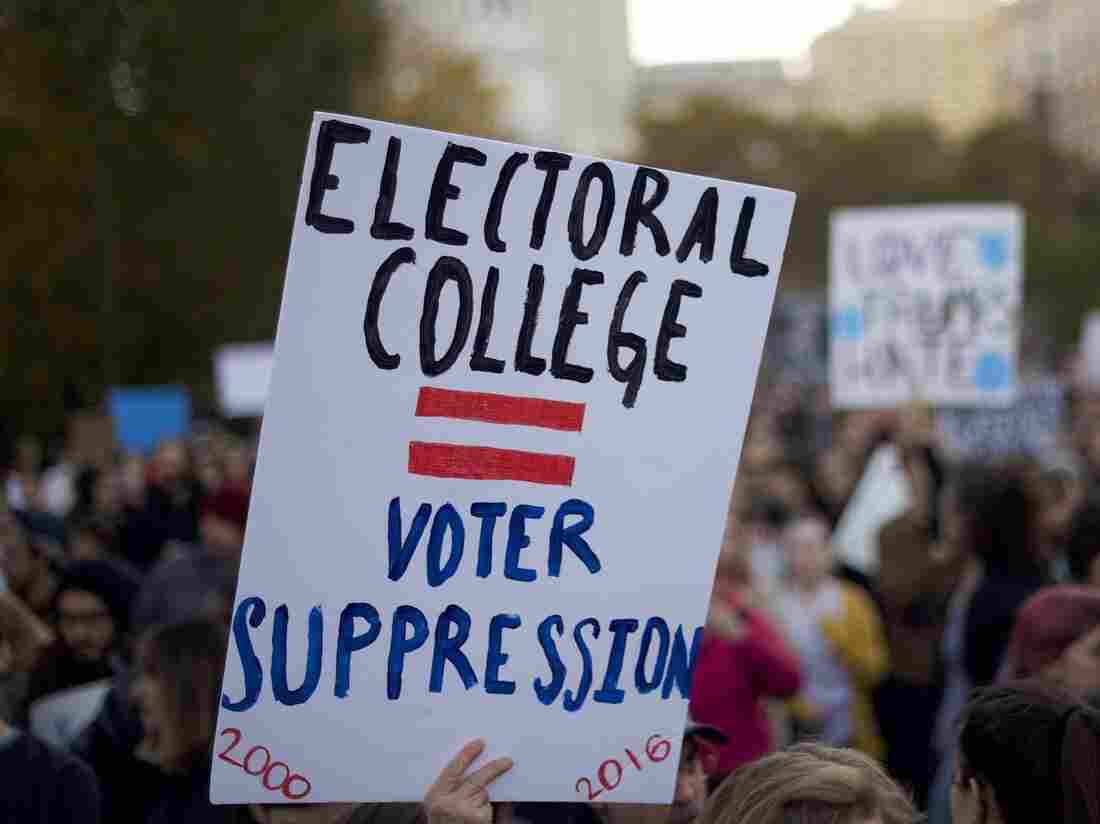 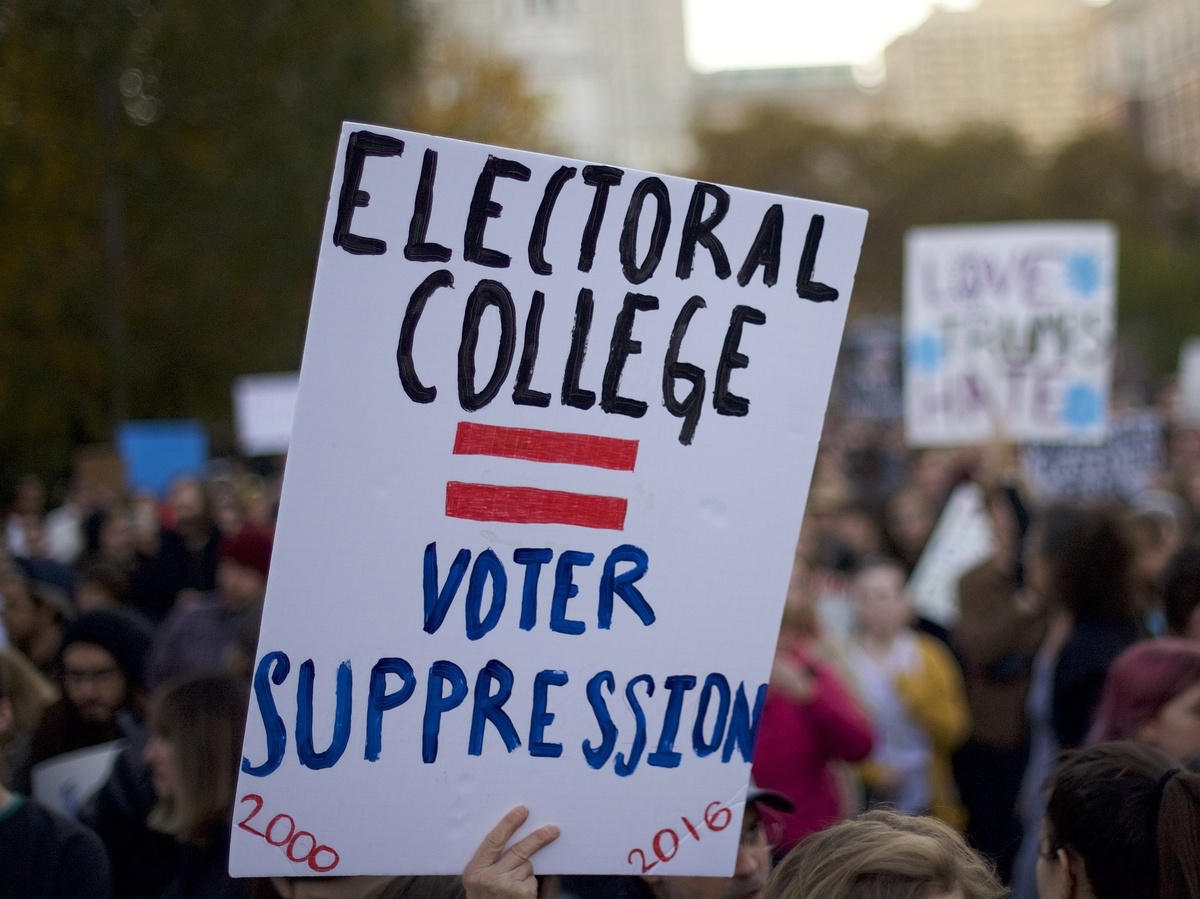 Protesters demonstrate four years ago against Donald Trump, then the president-elect, outside Independence Hall in Philadelphia. Trump won the Electoral College but lost the popular vote by nearly 3 million votes.

As the last few thousand votes are counted in a handful of states that will determine the outcome of a momentous presidential race, the question rises again from some corners: Should we ditch the Electoral College?

On Tuesday, voters in Colorado affirmed their desire essentially to do just that. By a 52-to-48 margin, Coloradans voted to stay in the National Popular Vote Interstate Compact. The state joined the compact last year, but a repeal effort landed the issue on the 2020 ballot.

So what is it exactly?

The compact is basically a contract between states that goes into effect once enough states representing a majority of electors — 270 — sign onto it. The states in the compact agree that rather than giving their presidential electors to the candidate who wins the most votes in that state, they will award all of their electors to the candidate who wins the most popular votes in the country. While the Electoral College would not be eliminated, the result would be a president elected by a national popular vote.

To date, 15 states and the District of Columbia have signed on, with a combined 196 electoral votes. To take effect, the bill needs to be enacted by states that have an additional 74 electoral votes, and thereby cross that 270 threshold needed to elect a president.

What would a national popular vote mean for the United States?

For one thing, this week would have looked completely different. Instead of watching livestreams of poll workers in Philadelphia, the result would have been settled on Tuesday night.

"We'd be talking about the next Biden administration," Jesse Wegman told NPR on Thursday, "who his Cabinet would be." Wegman is the author of the book Let the People Pick the President and a member of The New York Times editorial board.

By the wee hours of Wednesday, Democratic candidate Joe Biden was leading President Trump by nearly 2 million votes nationwide. Biden's lead has since grown to more than 4.3 million.

Electoral College 'Not Carved In Stone': Author Advocates Rethinking How We Vote

Going back at least to 1968, it has been clear on election nights who had won the national popular vote, Wegman says – even in nail-biters such as 2000.

"We knew Al Gore had won the popular vote in the country on election night. There was no question. What we spent 36 days fighting over was Florida's votes, and Florida's 25 electoral votes [in 2000], which it gives out winner-take-all."

Our current outsize focus on a handful of purple states is because nearly all states award their Electoral College votes in the same way Florida does: The winner of the state's popular vote wins all of the state's electors.

The Electoral College system has created a number of issues. First, the votes aren't exactly proportional to population.

If the U.S. used a popular vote, rather than the Electoral College, advocates say every vote in every state would matter – and each one would count equally.

Electors are apportioned based on how many representatives a state has in the House of Representatives plus its two senators. The District of Columbia is allotted three electors.

"In a sense, you could say that Wyoming's voters actually get more bang for their buck in the Electoral College because, after all, a very small number of people are choosing three electors," as NPR's Ron Elving explained.

One person, one vote? Not quite.

Another issue is the one we're watching play out right now: Only the states that are closely divided between Democrats and Republicans get any attention at all in the general election.

More than 4 million people voted for Trump in California – a huge number. But those votes are effectively rendered invisible by the Electoral College, and California is ignored by candidates in the general election because it is a safe Democratic win. Winner takes all.

How Does The Electoral College Work, And Is It Fair?

But what about one of the major concerns often voiced about a popular vote – that rural areas would be ignored in favor of big population centers?

Patrick Rosenstiel, a senior consultant to National Popular Vote, says the current system overlooks both rural and urban voters, depending on the state they live in.

"States like New York and North Dakota are valued the exact same way under the current system. They're valued not at all, because they're reliably either Republican or Democrat," he says. "The only way I know how to put urban voters at parity with rural voters and rural voters at parity with urban voters is to make every voter in this country politically relevant in presidential elections."

The way to do that? a national popular vote that would require candidates to campaign in all 50 states.

The effect would be that every voter would know their vote matters, Rosenstiel says: "I don't care if you're in the heart of Manhattan or in the outskirts of Helena. When you go vote for the American president, you know what's going to count toward the final result in a national popular vote election. And you're not going to be treated like a second-class citizen."

The Electoral College: Why Do We Do It This Way?

Rosenstiel, who describes himself as "a lifelong Republican trapped behind the blue wall in Minnesota," says the national popular vote effort has a lot of support from frustrated voters around the country.

And that's why, he says, donors from outside Colorado gave money to the Colorado campaign to support the interstate compact — the group Yes on the Popular Vote raised and spent about $4.5 million, according to Colorado Public Radio.

"They want to end the system we have today, and for good reason," Rosenstiel says. "They don't feel valued. It doesn't produce a good result. It's not the candidates' fault. I'm not suggesting the result would be good or bad no matter who wins this. But the bad result is it leads to chaos, unneeded recounts, lawyers and courts picking presidents."

Opponents of the Colorado national popular vote law point out that the compact could put the state's electors in the position of voting for a candidate not supported by a majority of Colorado voters.

There's no doubt that changing the current system is an uphill battle.

But Rosenstiel says the problems in the current system are plain enough to see: "The system you're watching unfold right now is crushing under its own weight."

The states and District of Columbia that have joined the popular vote compact so far all went for Biden in this election: blue states. But the bill has also passed in legislative chambers controlled by Republicans, including the Arizona House and the Oklahoma Senate.

Rosenstiel notes that the entire red state-blue state lens through which we've come to see America is a product of the Electoral College system.