Accessibility links
Kamala Harris: First Woman Of Color Elected VP Harris is the first woman, the first Black person and the first Asian American elected vice president of the United States. Her rise marks a statement about a changing nation. 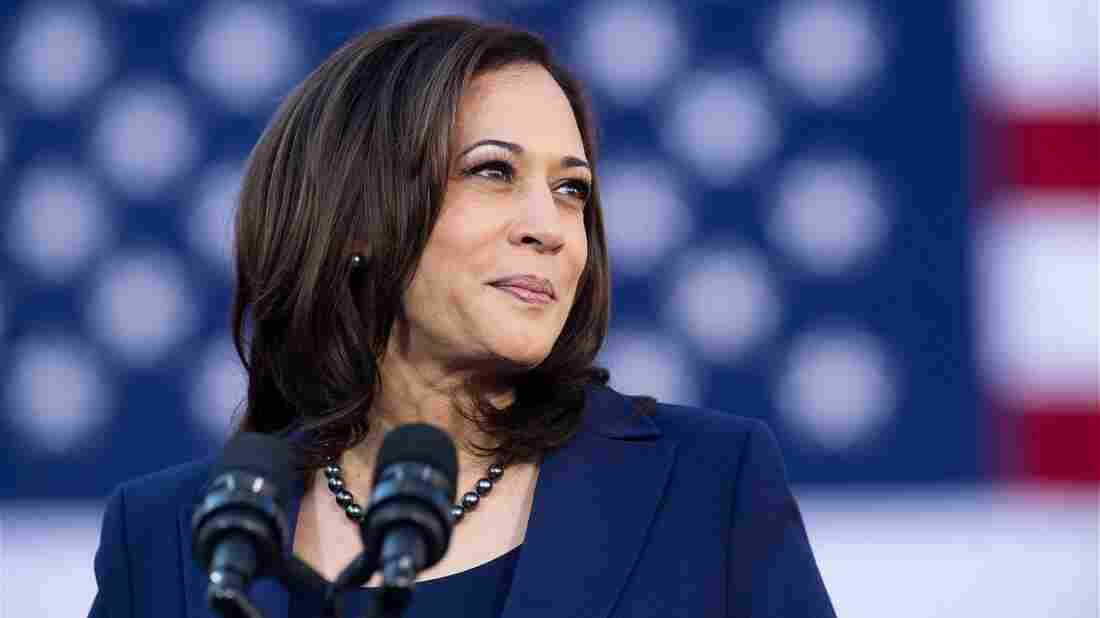 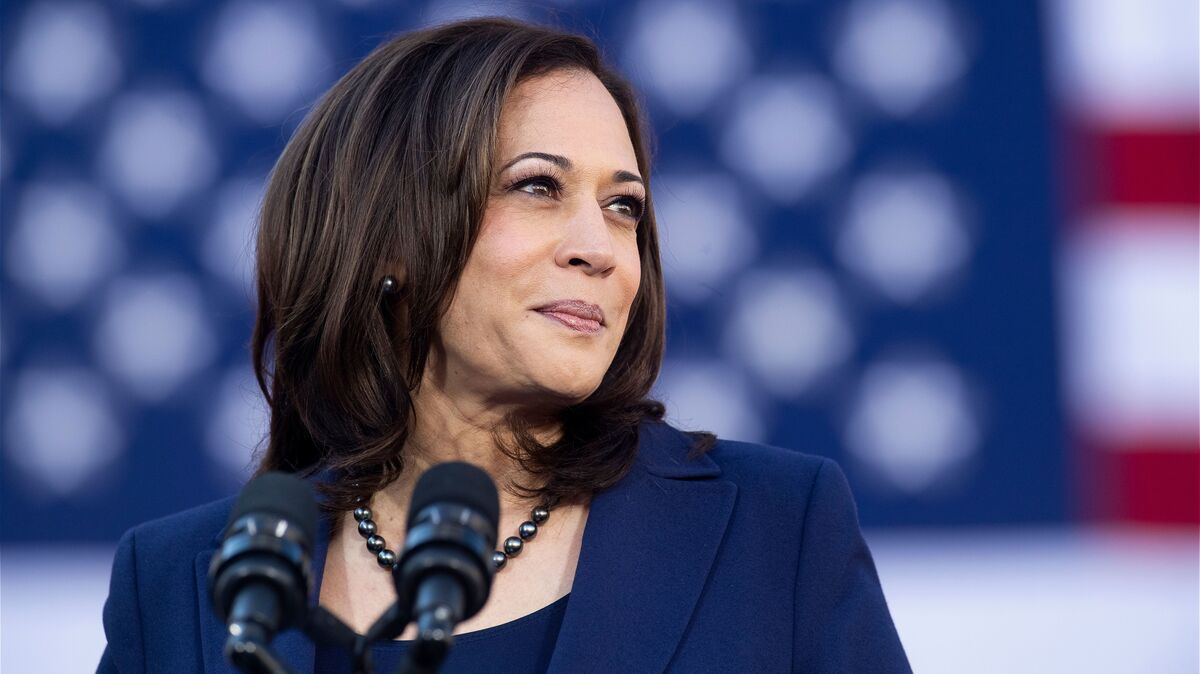 Vice President-elect Kamala Harris is the first woman, the first Black person and the first Asian American elected to the second highest office in the United States.

California Sen. Kamala Harris will become the next vice president of the United States, shattering another racial and gender barrier in American politics, at the end of a bruising presidential race that further exposed a bitterly divided electorate.

Harris, 56, will bring a legion of firsts to the vice presidency: A daughter of immigrants from India and Jamaica, she will be the first woman, the first Black person, the first Indian American and the first Asian American to hold the office. She will also be the first graduate of a historically Black college and first member of a Black sorority to do so.

"We did it, Joe": those were the words of Kamala Harris as she called her running mate Joe Biden after a win in Pennsylvania took the Democratic ticket past 270 Electoral College votes.

"It sends a message about what kind of country we are today," said Manisha Sinha, a professor of American history at the University of Connecticut. "An interracial democracy that represents people, men and women, from all over the globe. I think that's a very good thing for American democracy. And for me personally, it gives me a sense of national belonging that may not have been there before to some extent."

Harris claimed her place in history on Saturday after a close battle for the White House, at the conclusion of which President Trump falsely claimed victory with millions of votes outstanding, and his legal team pursued action amid the close race. It also closes an election season upended by the coronavirus pandemic, and a fierce national reckoning over race, justice and police brutality.

Democrats were seeking a victory that would demonstrate a repudiation of Trump and the direction in which he is leading the country. That did not happen this year, in a race with razor-thin margins in some key states, and there was no Democratic wave. But in Harris' elevation to the vice presidency, the party and the country mark a significant milestone in a caustic political environment.

Still, it is a jubilant moment for many women across the country, but most notably for Black female activists who pushed Joe Biden to name a Black woman as his running mate. Black women have been longtime party stalwarts and were a key constituency that helped deliver Biden the Democratic nomination, though activists say the contributions of Black women have often been overlooked and taken for granted.

"Black women have always been the backbone of this Democratic Party, and oftentimes not valued for our ability to lead," said Barbara Lee, the congresswoman from Oakland, Calif., who was a co-chair of Harris' own presidential bid, which she launched in January 2019. "But I tell you now, Black women are showing that Black women lead, and we'll never go back to the days where candidates only knew our value in terms of helping them get elected. Now they will see how we govern from the White House."

Lee said the moment made her think back to working on the campaign of Shirley Chisholm — the pioneering first Black woman to serve in Congress and who also became the first woman to seek the Democratic Party's presidential nomination in the 1972 election.

"When Kamala was selected as the vice presidential nominee, I thought about Shirley Chisholm, and I thought about how it took all this time, but how happy she must be," Lee said.

Glynda Carr, the president of Higher Heights, a group dedicated to building the political power of Black women, described the moment as "game-changing."

"Kamala Harris' win is going to change the way we think about what leadership looks like," she said. "My goddaughters will know the possibilities that exist for their political leadership if they want to pursue that. I was most prideful to see my little goddaughter, who is in pre-K, standing at that TV, one inch away, looking at Sen. Kamala Harris."

Celebrations broke out across the country on Saturday, including on The Yard at Howard University. Ashley Gray, who defended her dissertation — which happened to be on black women in leadership — was there.

"There's symbolic history in us being here, and her having gotten her foundation here," she said.

Shanel Wilson, who graduated from Howard four years ago, said that "to see one of our own in the White House, that's a major accomplishment."

In Austin, as a crowd sang 'We Are The Champions,' Gabriela Long grew emotional as she described a moment of release.

"We're just so happy because the past four years has been really bad," she said, as her voice broke. "Seeing a Black woman as vice president after all of this, it really just makes me emotional, seeing someone I can look up to."

"Her background is something that we often celebrate about America, that we are this immigrant melting pot, we are a place where anybody can succeed who can come to America and find opportunity, and her family did that," said Chryl Laird, an assistant professor of government and legal studies at Bowdoin College.

Biden's selection of Harris as his running mate earlier this year, and her ascension to the vice presidency, is a nod to the future of the Democratic Party. Her place on the ticket could well pave the way for Harris to become the leader of the party in four or eight years.

The first time that Biden and Harris appeared together as the Democratic ticket, Biden nodded to the history that Harris had made — and the barriers that she could break in the future.

"This morning, all across the nation, little girls woke up — especially little Black and brown girls, who so often feel overlooked and undervalued in their communities. But today, today, just maybe, they're seeing themselves for the first time in a new way," Biden said at their first event as political partners.

"It is not without struggle"

Harris herself has discussed, cautiously at times, her own trailblazing status and has acknowledged that the experience of being a "first" or "the only" can often come with its own battle scars.

"When you break things, that can be painful. Sometimes you get cut. Sometimes you bleed," she has said, reflecting on her own experiences — and on those who came before her. "It will be worth it every time, but it is not without struggle."

In the closing days of the campaign, Harris was the subject of attacks from the president, who called her a "monster" and a "communist," and argued that it would be an "insult" if she one day became the first female president. Republican Sen. David Perdue appeared to intentionally mock Harris' first name at a campaign rally in Georgia.

"If you think of the kind of racist and misogynistic slurs that are hurled at Black women or sometimes even unconscious ideas about who Black women are and how they should behave, or how they should talk, I think she's the best answer to that," said Sinha. "In a way, I think it will lead to the country's healing a little bit after four years of blatant racism and sexism being literally espoused from the highest office in the land."

Trump Calls Harris A 'Monster,' Reviving A Pattern Of Attacking Women Of Color

Harris' ascension to the vice presidency comes four years after Hillary Clinton's bruising 2016 loss. And it also comes after Harris' own much-lauded campaign for the White House fell short of the same goal.

Harris' campaign began with a flag-draped rally in Oakland, Calif., and she was one of a historically diverse field of candidates, including multiple women and people of color, who vied for the Democratic presidential nomination this year. But Harris dropped out last December, before voting began, and in choosing Biden, her party again opted to elevate another white man.

So Harris did not shatter the "highest, hardest glass ceiling" that Clinton somberly talked about when conceding in the Democratic primary in 2008 and and general presidential election in 2016. But it is a singular feat that a Black woman who is a daughter of immigrants achieves this milestone first, in a country where some may have expected a white woman to break this barrier.

Clinton wrestled with gender and her own history-making status, ultimately giving it a more prominent role in her 2016 campaign than in 2008. As Mirya Holman, a political science professor at Tulane University who studies women in politics, explained, while both campaigns were historic, Harris' ascent stands apart from the history of Clinton's campaign.

"Kamala, in comparison, got to kind of do whatever she wants. And part of that, I think, is that she's not at the top of the ticket. Part of that, though, is that she's a Black woman and she in that way gets to separate herself from the legacy of Hillary Clinton in ways that I don't think, say, Elizabeth Warren would have been able to," said Holman. "And part of it has been a very strategic action on the part of the Biden campaign to really showcase Kamala as a unique, unusual individual and an exciting part of the campaign. Let's not even talk about history, let's just talk about how cool she is today."

Multiple women pointed to the profound influence of Harris' mother, Shyamala Gopalan, that led the Californian to this moment. Gopalan, who left India in the 1950s to pursue graduate studies at UC Berkeley, died of cancer in 2009. Her father, Donald Harris, is a professor of economics at Stanford University. The two divorced when Harris was a child, and it is her mother's impact on Harris — in life and through her death — that is indelible.

Congresswoman Lee, who has known Harris since the 1980s, recalls running into her at a political event after Lee's own mother died in 2015. Harris, Lee explained, connected with her over their shared experience of grief.

"It was just a moment that demonstrated how caring she was and how she could connect and understand the pain of women, the pain of loss and just what it meant, because she's been through that experience also," Lee said. "I think that bodes well for someone who's a vice president of the United States to be able to connect with people the way she did with me."