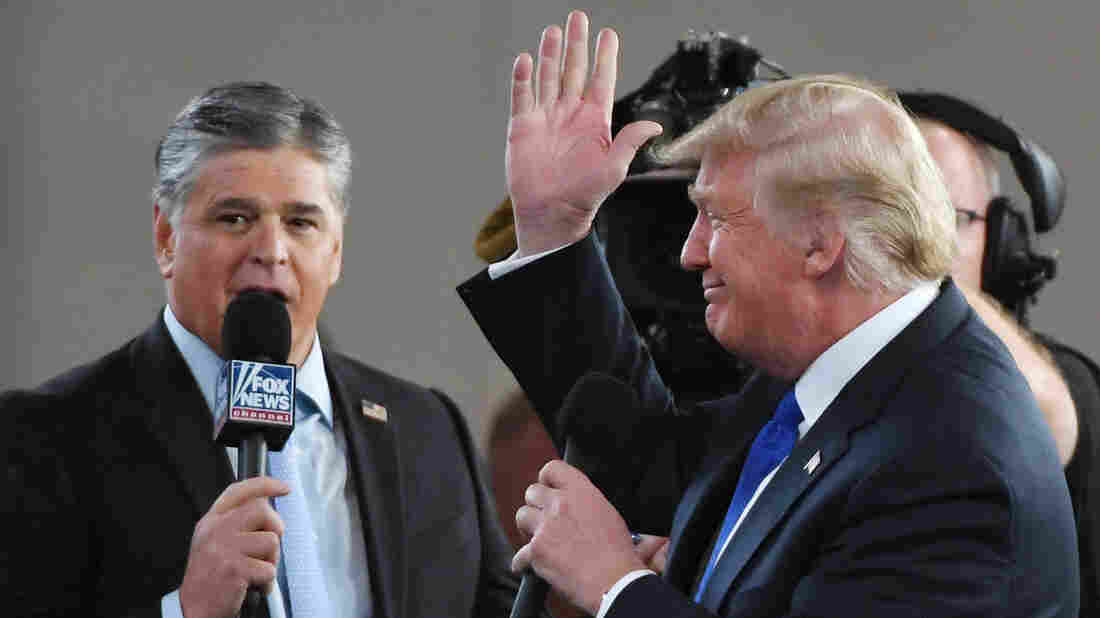 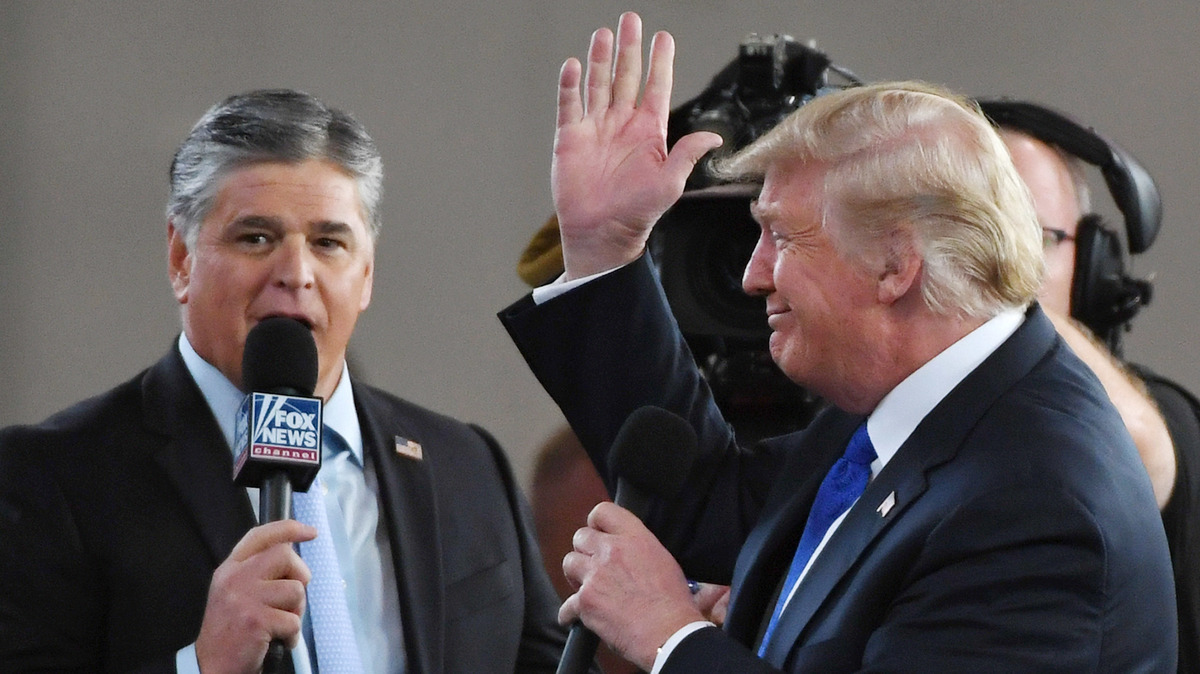 There may be no media figure more important in preparing Republicans and President Trump himself for a post-Trump period than magnate Rupert Murdoch.

Among his properties, the top-rated Fox News Channel stands out, its role in shaping conservative thought and Republican Party politics unrivaled, at least within media. Murdoch allied himself with Trump despite holding the former reality show host in low esteem. And Fox has been one of Trump's strongest sources of support. So how the channel presented Democratic presidential nominee Joe Biden's rising election fortunes matters. Deeply.

On Tuesday night, Fox News became the first major news outlet to declare that Biden would win Arizona. An angry Jared Kushner, the president's son-in-law, dialed Murdoch to demand he reverse the network's call. Pro-Trump supporters in Maricopa County, Ariz. — some of them armed — led chants of "Fox sucks." And for days, the network's top opinion hosts gave ballast to the president's unfounded and corrosive claims of voter fraud by Democrats, seeking to discredit the entire electoral process.

Fox News' journalists, by and large, have attempted to navigate a gentle landing for their audiences so that they recognize Trump has lost the election. But the network's stars have larded their shows with Trump advocates. All this week, they've made baseless but incendiary accusations to ensure that viewers never accept Biden as legitimate.

Murdoch threw his weight and his media outlets behind the president early on, although his Wall Street Journal's news pages have also offered muscular investigative reporting on Trump. That alliance has served Murdoch well, giving him full and frequent access to Trump as well as a presidential seal of approval on his sale of entertainment properties to Disney despite antitrust concerns.

The president considers many Fox News figures among his closest advisers. These include Sean Hannity, Lou Dobbs, Jeanine Pirro and others. He has drawn from the ranks of Fox contributors to fill senior White House appointments and even considered stars for Cabinet positions. And they, in turn, have been ferocious in relaying the president's baseless claims, winning his frequent appearances on their programs and stratospheric ratings in response.

As one small sign of the ways in which Fox and Trump Republicans can orchestrate programming, on Friday evening, NPR reviewed an internal GOP memo sent to top party officials to prepare Republican National Committee Chairwoman Ronna McDaniel for her appearance on Hannity's show that night. It set out in great specificity the intended flow of the show's lengthy opening segment — including its guests, articles and subjects — and the primary points Hannity would make. The two jointly focused on stoking suspicions of voter fraud. (The RNC confirmed the memo's authenticity but declined to comment on the collaboration.)

After Fox's election project decision desk called Arizona for Biden late Tuesday night local time, the Trump campaign put out a statement trashing its head, Arnon Mishkin, who later appeared on-air to acknowledge he had done work for Democrats in the past. One Republican senator, Kevin Cramer of North Dakota, accused Fox of a cover-up in a radio interview and called on the network to fire Mishkin. "Fox News owes the American people an apology," he said.

The network stood by its decision desk.

But others say the Murdochs need to do more to help viewers accept the verdict of the American public. CNN anchor Jake Tapper said on-air, "The Murdochs and the people at Fox have an obligation to put their country above their profits." Murdoch's liberal daughter-in-law Kathryn Murdoch tweeted that she agreed. She is married to Murdoch's younger son, James, who is no longer a top executive within the family media empire, though he retains a major stake.

And the culture clash between the network's top news anchors and its brightest stars, many of whom climbed aboard the Trump train to ratings glory, is at its most stark.

"The [question about] transparency and watching the ballots is different than finding fraud that narrows the gap," anchor Bret Baier told McDaniel, the GOP chairwoman, on the air Friday morning. "There's all kinds of stuff flying on the Internet. But when we look into it, it doesn't pan out."

He and anchor Martha MacCallum sounded like they were staging an intervention: They were affirming, even soothing McDaniel, while taking issue with the substance of her claims.

Compare that with Hannity's rhetoric on Thursday night: "Americans will never be able to believe in the integrity and legitimacy of these [election] results." Or Dobbs, who condemned GOP lawmakers Thursday for being insufficiently loyal to Trump: "I don't even hear thank yous, let alone engagement to do the right thing and stop this corruption at the ballot on the part of the Democrats."

Fox's conservative stars gave guests uncritical time to make baseless claims bashing the integrity of the electoral system, as Trump has for weeks.

"President Trump won this election," House Minority Leader Kevin McCarthy said without offering any evidence. "So everyone who's listening: Do not be quiet. Do not be silent about this. We cannot allow this to happen before our very eyes." (McCarthy later claimed he was referring to Trump's winning seats in the House for Republicans, not the White House, but that would render the rest of his comments incomprehensible.)

CNN reported Friday that Fox News anchors had received a memo warning them not to call Biden "president-elect" even if the network projected him to win Nevada's six electoral votes. (Because of the Arizona projection, that would give Biden enough to secure the network's call for the presidency.) According to a Fox News staffer, midlevel producers were advising on-air journalists to await more concrete direction from the network's Washington desk before bestowing that title. A Fox News spokesperson said there have been no networkwide memos or editorial guidance from Fox News.

Later in the day, Baier and Fox News Sunday host Chris Wallace went out of their way to indicate Biden would be president-elect should he win Pennsylvania or another state.

On Thursday, the New York Post published online two stories deeply discounting claims made by Trump in his White House remarks that night and in an earlier tweet from his son Donald Jr.

What Trump and his supporters may forget is that Murdoch's conservatism is tempered by his pragmatism. He is always in the business of finding a way to do business. And he very much wants to back a winner. Which means, at times, that Murdoch and his properties pivot — severely.

Just after Republican presidential nominee Mitt Romney went down to defeat in 2012, Hannity announced he had had an "evolution" on immigration. It happened within 24 hours of then-Fox News Chairman Roger Ailes telling his broadcasting team that people in the U.S. without legal status could no longer be demonized as illegal immigrants. (Ailes, and Fox, would later backslide in a big way on that conclusion.)

And indeed, on Friday, after a fairly fiery hour of Hannity's show, Laura Ingraham encouraged Trump to depart the scene with dignity, should the occasion arise. (And yes, Fox hosts do communicate with Trump by speaking directly on the air as well as off.) "President Trump's legacy will only become more significant if he focuses on moving the country forward," Ingraham said. "And then the love and respect his supporters feel for him? It's only going to grow stronger."

Now you can watch Fox's conservative hosts on the air — the ones who make the network so profitable — maintain their loyalty to Trump, while the news side gently pulls the network into the orbit of political gravity. How deftly the network negotiates that shift more completely — and how soon it does so — will help determine how readily its viewers, the president's fans and the president himself come to terms with the political reality.

Murdoch's Fox will always emerge to greet another day. It flourished during the Clinton and Obama administrations. "The news cycle will moderate," Fox Corp. Executive Chairman and CEO Lachlan Murdoch, Rupert's older son, told investors this week. "We fully expect to be No. 1 and maintain share through that."

As much as Murdoch covets access to power, his media outlets are always most at home in muscular opposition.