Accessibility links
What Is Biden's 100-Day Plan? Joe Biden has made dozens of campaign promises. A significant amount of his agenda centers on reversing or updating positions taken by the Trump administration. 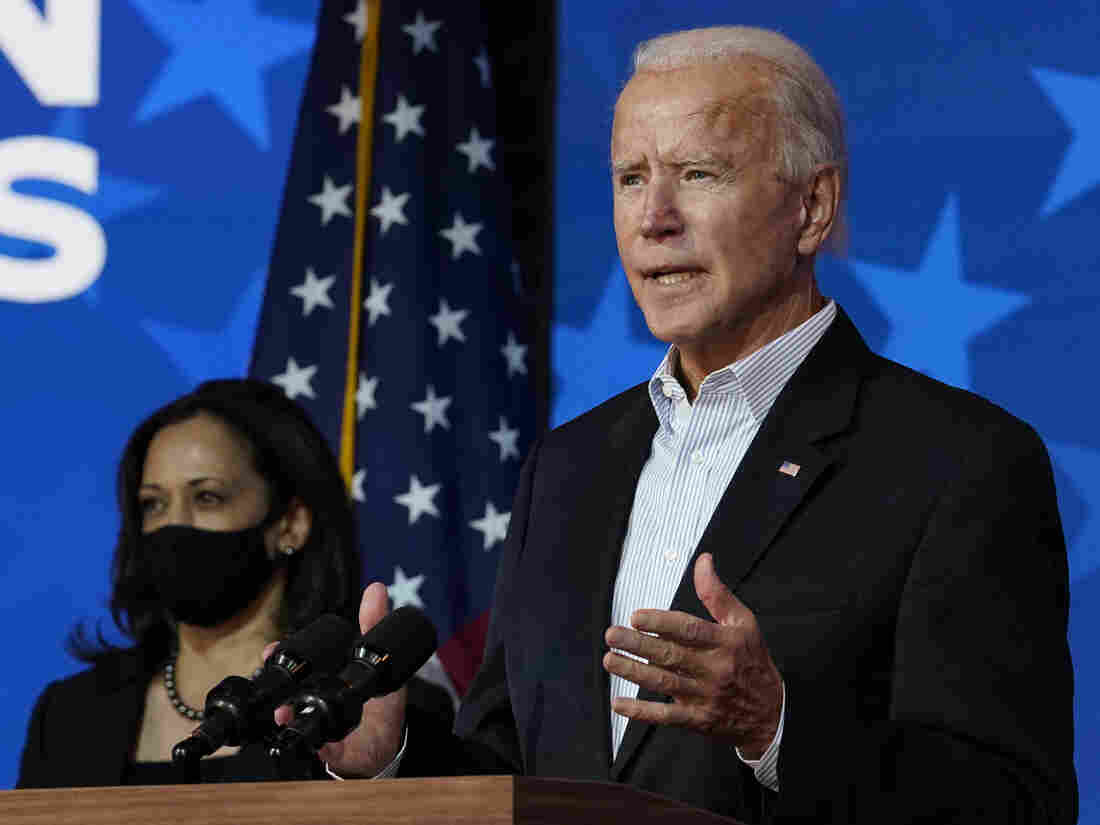 President-elect Joe Biden, flanked by Vice President-elect Kamala Harris, is likely to face a divided Congress. That's something he'll need to consider as he sorts through which parts of his agenda to push first. Carolyn Kaster/AP hide caption 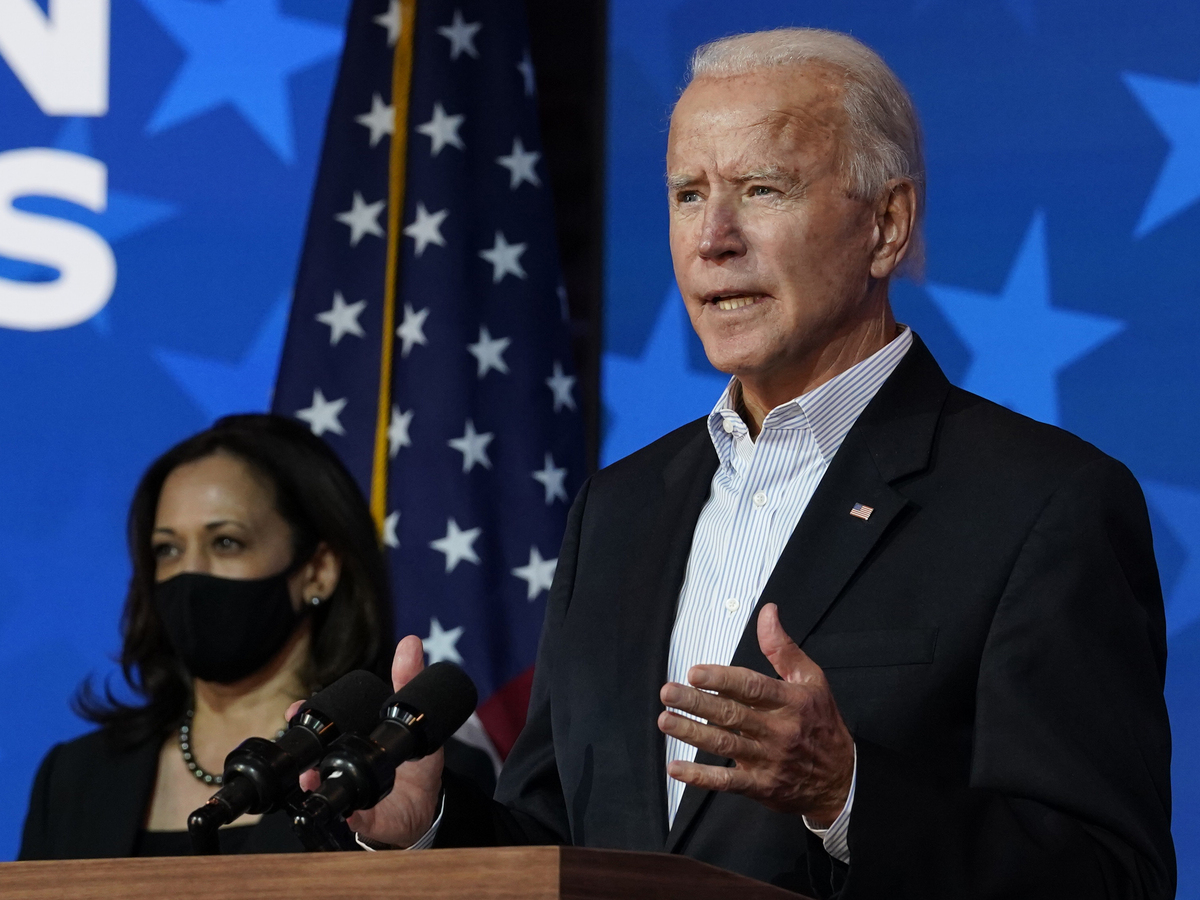 President-elect Joe Biden, flanked by Vice President-elect Kamala Harris, is likely to face a divided Congress. That's something he'll need to consider as he sorts through which parts of his agenda to push first.

President-elect Joe Biden will take office in January with a lot of promises to keep. He has pledged to enact new policies swiftly that veer the U.S. off President Trump's current path.

Biden ran a heavily policy-focused campaign, releasing dozens of lengthy and ambitious plans ranging from large-scale economic and environmental initiatives to broad actions on racial justice, education and health care. A significant amount of Biden's agenda also centers on reversing or updating positions taken by the Trump administration, especially on immigration and foreign policy. Biden heads into office with strategies to address the COVID-19 crisis and the search for a vaccine as well.

The sheer volume of Biden's plans could make it a challenge to execute them all. On immigration alone, he has proposed more than a dozen initiatives to complete within 100 days of taking office, a feat that could prove difficult to execute.

As the president-elect sorts through which priorities to push first, he'll need to consider that he is likely to face a divided Congress. Control of the Senate is still up in the air, with two Georgia runoff elections set for January, but Republicans are poised to maintain control. Democrats also have a slimmer majority in the House of Representatives, where the GOP made gains contrary to most party leaders' and analysts' predictions.

The political dynamic on Capitol Hill means Biden may have to pull back from some policy proposals that many on the left of his party have been pushing on health care and the environment. He will likely need to focus more immediately on issues that could attract bipartisan support, such as providing COVID-19 relief and improving U.S. infrastructure.

NPR has taken a look through some of Biden's promises and short-term goals for his presidency, some of which are laid out on a new transition website. Here's what might be coming:

What Biden says he'll do on Day 1 or beforehand

COVID-19: Assemble a coronavirus task force during his presidential transition

Days after becoming president-elect, Biden announced a team of advisers that will spearhead his pandemic response once he takes office. The task force will be led by Dr. David Kessler, a former Food and Drug Administration commissioner; former Surgeon General Vivek Murthy; and Dr. Marcella Nunez-Smith, an associate professor of medicine and epidemiology at Yale School of Medicine.

"The advisory board will help shape my approach to managing the surge in reported infections; ensuring vaccines are safe, effective, and distributed efficiently, equitably, and free; and protecting at-risk populations," Biden said in a statement Monday morning.

As part of this initiative, the president-elect has also promised to begin working on a new coronavirus aid package before officially taking office, vowing to coordinate with state governors, mayors and other local politicians.

"I'll ask the new Congress to put a bill on my desk by the end of January with all the resources to see how both our public health and economic response can be seen through the end," he said at an event in late October.

Biden's proposed COVID-19 response plan calls for expanding coronavirus testing resources as well as for increasing the country's capacity to make personal protective equipment by leveraging the Defense Production Act. He has also backed legislation that would create a separate COVID-19 Racial and Ethnic Disparities Task Force, which Vice President-elect Kamala Harris proposed in the Senate in the spring.

As part of a COVID-19 relief package, Biden has in the past called for at least $10,000 in student loan debt to be canceled for all Americans.

Biden has said he'll start working to install "an effective distribution plan" for a potential COVID-19 vaccine on the first day of his presidency. His plan would spend $25 billion on vaccine production and disbursement, and calls for an eventual vaccine to be free for all Americans.

Biden has expressed skepticism over the Trump administration's promises to provide a vaccine quickly. Trump has said he will have a vaccine ready for distribution by the end of 2020.

COVID-19: Listen to science by rejoining WHO and keeping Fauci as a close adviser

As president, Biden says he will mend the U.S. relationship with the World Health Organization, rejoining the body on his first day in office. Trump pulled out of WHO over the summer.

Biden also said that he plans "immediately" to ask Dr. Anthony Fauci, the government's top infectious disease expert, to stay in his post as director of the National Institute of Allergy and Infectious Diseases, a job he's had since 1984.

Trump had hinted that if he won the election, he might fire Fauci.

Biden has pledged that on his first day as president he will raise corporate income taxes to 28% — compared with the current 21% rate set by the GOP-led tax cuts of 2017. Also, this promise falls under Biden's larger proposed tax plan, which stresses that Americans making less than $400,000 would not pay more in taxes.

Environment: Make the U.S. an international leader on climate change

In one of his longest-standing campaign promises, Biden heads into office planning to reenter the U.S. immediately into the landmark Paris climate accord of 2015. Trump's move to pull the U.S. out of the agreement became official this month after a mandatory one-year waiting period that started when the president formally notified the United Nations.

Biden has pushed for the passage of laws to strengthen the Voting Rights Act. Legislation to do so passed the U.S. House last year but not the Senate. Biden advocated for extending the original 1965 legislation following the death of civil rights icon Rep. John Lewis of Georgia.

Biden has said that on his first day as president he will produce comprehensive immigration legislation that creates a pathway to citizenship for 11 million migrants living in the U.S. illegally. It would also provide a pathway to citizenship for people commonly known as DREAMers, who are part of the Deferred Action for Childhood Arrivals program.

Biden has additionally pledged to make the DACA program permanent on his first day in office, a move that comes after years of Trump administration attempts to rescind the program.

The president-elect has vowed to stop the practice of separating immigrant families trying to enter the U.S. from Mexico. On Day 1 as president, Biden has said he plans to pass an executive order establishing a task force focused on reuniting children and parents separated at the border.

Biden says he will "immediately rescind" current restrictions that bar people in some Muslim-majority countries from traveling or immigrating to the United States. He supports legislation that would outlaw such restrictions and has vowed to sign off on it as president.

What Biden says he'll do during his first 100 days

Immigration: Reverse a slew of Trump policies, including the construction of a U.S.-Mexican border wall

Within the first 100 days of his administration, Biden says he wants to reform the U.S. asylum system and the treatment of people at the border with Mexico, specifically calling for a stop to the Trump administration's Migrant Protection Protocols as well as to the policy of "metering" asylum cases.

The president-elect also pledges to take away funding toward continued construction of a wall along the southern U.S. border. But Biden says he wouldn't take down parts of the wall that have already been built.

The president-elect's immigration plan also would increase government supervision over U.S. Immigration and Customs Enforcement as well as Customs and Border Protection, calling for the need to hold personnel "accountable for inhumane treatment." This comes as a whistleblower complaint was filed in September concerning medical conditions at a Georgia immigrant detention center.

In response to the national outcry that erupted over police killings of George Floyd and other Black Americans, Biden said he will institute a national police oversight commission within his first 100 days of taking office. It's part of a larger plan to help overhaul policing, including investing $300 million into community policing measures across the U.S. and tasking the Justice Department with investigating possible issues of police and prosecutorial misconduct.

As the first step in a set of goals addressing prison reform and crime prevention, Biden says he will quickly push Congress to pass the SAFE Justice Act, proposed by Rep. Bobby Scott, D-Va. The legislation would include taking steps to reduce the use of mandatory minimum sentencing for nonviolent offenses and institute policies geared at lowering recidivism.

Biden has said he intends to "pick up the pieces of Donald Trump's broken foreign policy," vowing to reach out to U.S. allies soon after taking office. Within his first year, Biden wants to plan an international summit where democratic leaders will discuss ways to push back against corruption and authoritarian practices as well as expand human rights.

Biden also wants to organize a "climate world summit" to assist nations with high carbon emissions to take climate action. Questions remain about how either summit would be doable during a global pandemic.

It's not clear when we might start seeing some of Biden's big plans for the economy, environment, education system and health care take form — especially as the president-elect may enter the White House with a divided Congress. That said, these plans were substantial parts of his campaign, and his administration is likely to begin addressing them.

Biden hopes to create 5 million jobs through a series of large investments geared at benefiting different business areas. His proposed "Made in America" plan would pour $400 billion into procurement measures to boost domestic manufacturing as well as an additional $300 billion into research and development.

The president-elect also heads into office with an extensive set of environmental goals proposed through his clean energy plan, which includes getting the country to net-zero carbon emissions by 2050.

The proposal calls for a $2 trillion investment, throughout his term, to boost reliance on clean energy and climate sustainable practices. Biden also says that 40% of the funding will be used to support communities disproportionately affected by climate change, as laid out in his environmental justice plan.

Health care: Build on the Affordable Care Act if it isn't too late

A large part of Biden's health care proposal offers a new public option plan that builds on the existing Affordable Care Act, also known as Obamacare. But the ACA's fate remains in question during the rest of Trump's term and into next year.

On Nov. 10, the Supreme Court is set to hear arguments against the ACA from the Trump administration and multiple states. If the justices side with Trump next year when they make their decision, Biden's plans for health care could completely change.

Biden has laid out extensive plans for changes to higher education as well as pre-K through high school, but he has not expressed many clear deadlines during his first year.

Notably, the president-elect has expressed support for the College for All Act, proposed in 2017 by Sen. Bernie Sanders of Vermont and Rep. Pramila Jayapal, D-Wash., which would eliminate tuition at public colleges and universities for families making up to $125,000. Biden also is advocating for private historically Black colleges and universities and minority-serving institutions to be tuition-free.

For a comprehensive list of Biden's campaign proposals, check out NPR's issue tracker.