Accessibility links
Trump's Lame Duck Presidency Could Be Fateful President Trump remains in office until early 2021 — and there will be political struggles aplenty for Washington and the outgoing chief executive before Inauguration Day. 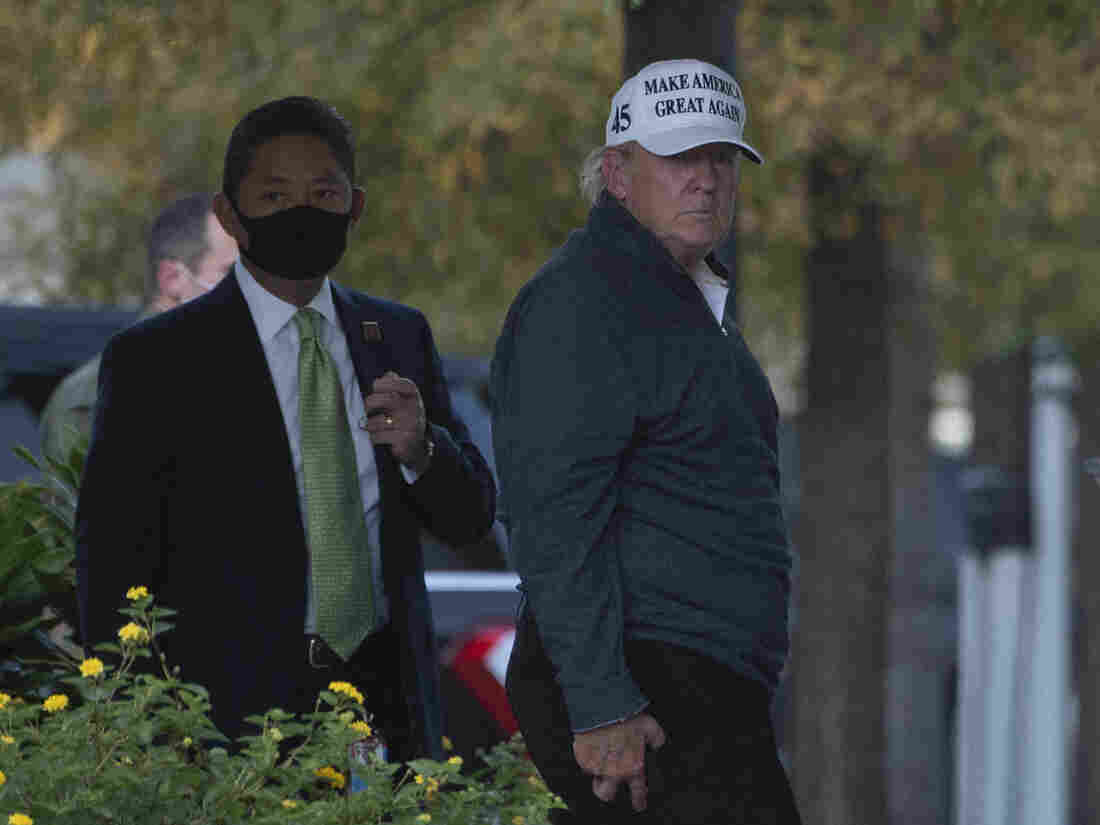 President Trump returns to the White House from playing golf Saturday after Joe Biden was declared the winner of the 2020 presidential election. Andrew Caballero-Reynolds/AFP via Getty Images hide caption 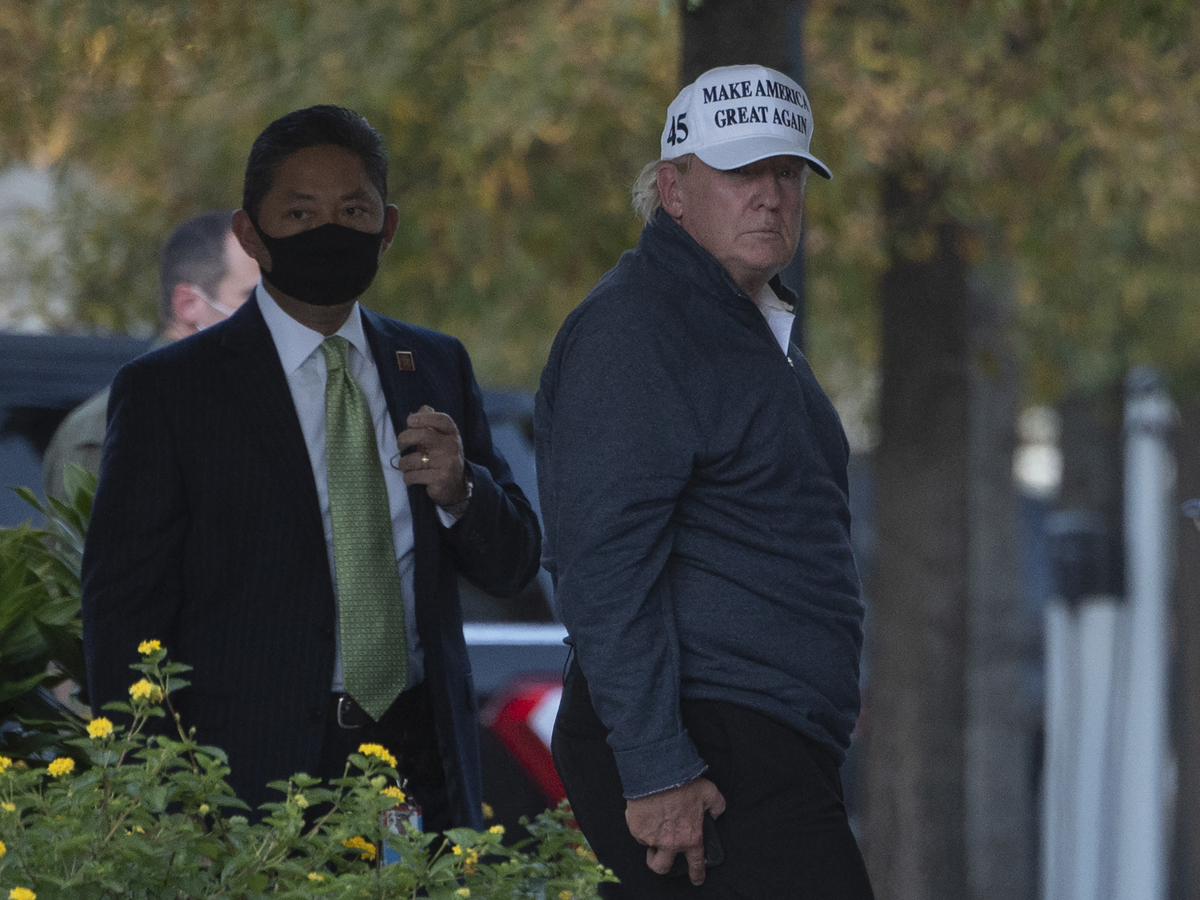 President Trump returns to the White House from playing golf Saturday after Joe Biden was declared the winner of the 2020 presidential election.

Democrats have brought the end of the Trump era into sight — but there are more than 70 days to go before the page actually turns and President-elect Joe Biden is inaugurated.

In the meantime, the most unusual era in modern American politics is phasing into what could be one of its most tumultuous transitions.

Here's what you need to know about the final act.

Resolution and reconciliation — or not

Trump has given no indication he's going to go quietly. In fact, he may fight legal cases connected with the election for days or weeks more, as much for the sake of the struggle as any legal merits involved. Supporters at a press conference Sunday in Las Vegas complained about what they called a bad process and said they were reviewing their options.

Trump also sought to make clear he doesn't consider this story over.

Since when does the Lamestream Media call who our next president will be? We have all learned a lot in the last two weeks!

"We all know why Joe Biden is rushing to falsely pose as the winner, and why his media allies are trying so hard to help him: they don't want the truth to be exposed. The simple fact is this election is far from over," Trump said Saturday.

The president isn't wrong, in terms of the mechanics: States must complete counting, certify the results and then follow the process of working through the Electoral College.

In the past, this hasn't gotten much attention as it plays out behind the scenes following a losing candidate's concession. This year, the president has a great deal of political, and likely personal, interest in sustaining the impression that he's been robbed of reelection, as opposed to having been ejected following a record turnout by voters.

The degree to which Trump and his camp dig in to their dead-ender strategy is important not only for their own purposes but also for the ability of Washington to operate over the remainder of this term.

Members of Congress postponed action on many important issues this year until after Election Day in hopes of resolving them in a clearer atmosphere.

They need to take up legislation to keep the basic operations of the government funded by Dec. 11. They need to pass the huge annual authorization bill for the military services by the end of December, which this year is freighted with unusual politics involving Confederate names in the military.

And lawmakers also have struggled for weeks to enact more relief legislation in response to the rolling coronavirus disaster — which continues to infect record numbers of Americans and could bring more lockdowns and economic pain as colder weather sets in.

Trump, who remains president through Jan. 20, would need to sign these or other bills. Will he engage with legislative leaders staying in Washington into the next Congress, or will he calculate it's politically wiser to stay aloof?

The passing of the baton

Trump has been defeated electorally, but his powers within the executive branch are undiminished, and another big question about the coming transition will be how, or whether, he cooperates with Biden and incoming Vice President-elect Kamala Harris in handing over the reins.

Biden and Harris are eager to be seen as professional and competent following what critics called the bumbling of Trump's team upon inheriting the White House from President Barack Obama.

So Trump's attitude now about the incoming administration will be important — as will the availability of senior officials such as White House chief of staff Mark Meadows, who recently tested positive for the coronavirus.

"To build an effective government ready to address the urgent needs of our great country, the new president will have to recruit 4,000 political appointees, including 1,250 who require Senate confirmation; prepare a $4.7 trillion budget; implement a strong policy agenda; and assume leadership of a workforce of 2 million civilian employees and 2 million active duty and reserve troops," the leaders of the bipartisan Center for Presidential Transition said in a statement Sunday.

The leaders of the center said they wanted to "urge the Trump administration to immediately begin the post-election transition process and the Biden team to take full advantage of the resources available under the Presidential Transition Act."

Presidential transitions always involve departures in the waning days of the outgoing administration, but this one brings more unusual questions about who may endure and for how long.

Defense Secretary Mark Esper, for example, already has reportedly prepared a letter of resignation that he may be ready to use if Trump does not go along with the effort to remove Confederate names from U.S. military installations.

And supporters of Trump were urging him to fire FBI Director Christopher Wray well before Election Day. The rumor mill in Washington has buzzed with the names of others whom Trump might drop out of frustration, including Attorney General William Barr.

Complicating matters is Republicans' continued control of the Senate, which will remain through the transition and, potentially, into the new Congress depending on the outcome of two key Senate races in Georgia.

That means that on one hand, allies such as Sen. Lindsey Graham, R-S.C., chairman of the Senate Judiciary Committee, can continue efforts such as their re-investigation of the Russia investigation — as Graham intends to do on Tuesday with former FBI Deputy Director Andrew McCabe, a favorite target of the GOP. That will be music to the White House's ears.

On the other hand, however, Wray and other administration figures enjoy support from senators who'll likely continue to serve in Washington after Trump is gone. FBI directors in particular are supposed to get a 10 year-term, and Wray is the kind of leader whom Biden might invite to stay on as part of his desire to be seen as a bridge builder with the opposite party.

There's precedent, too: When Obama and Biden were elected in 2008, for example, they asked then-Defense Secretary Robert Gates, a Republican, to stay into their administration.

But if Trump decided to fire Wray or others during the time he has left, those options and the relevant politics would become more complicated for Biden and Harris, and more time could be required for the new Democratic administration to find Cabinet nominees palatable to a Senate that could remain in Republican control. 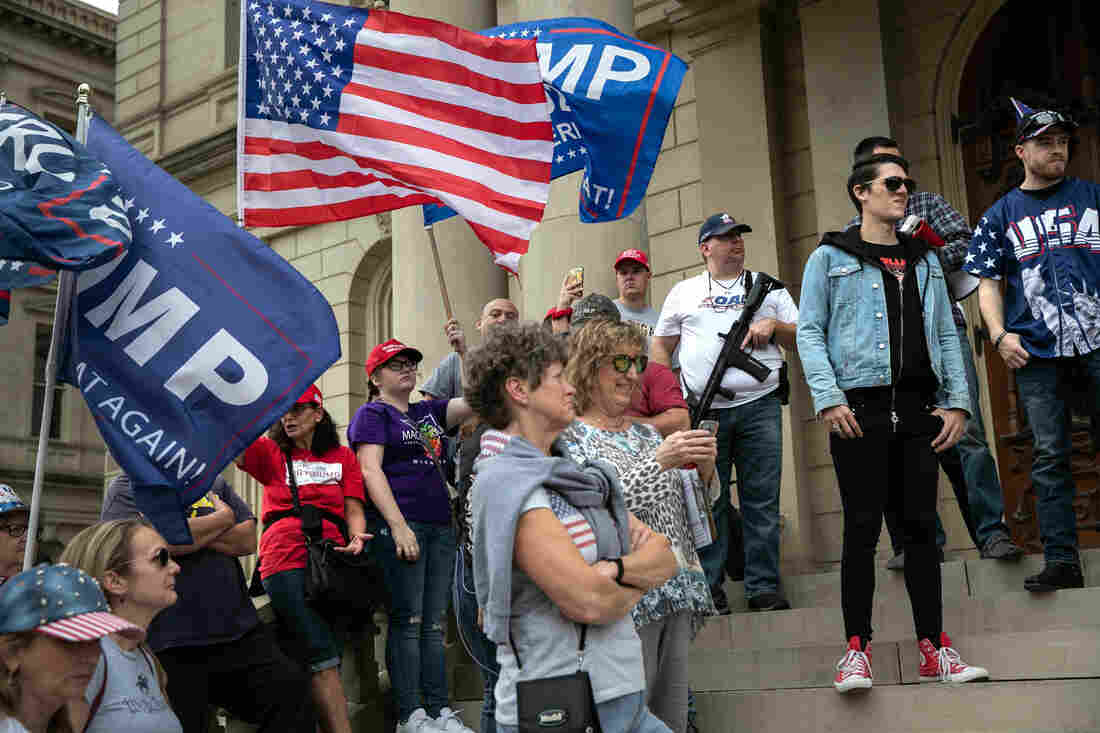 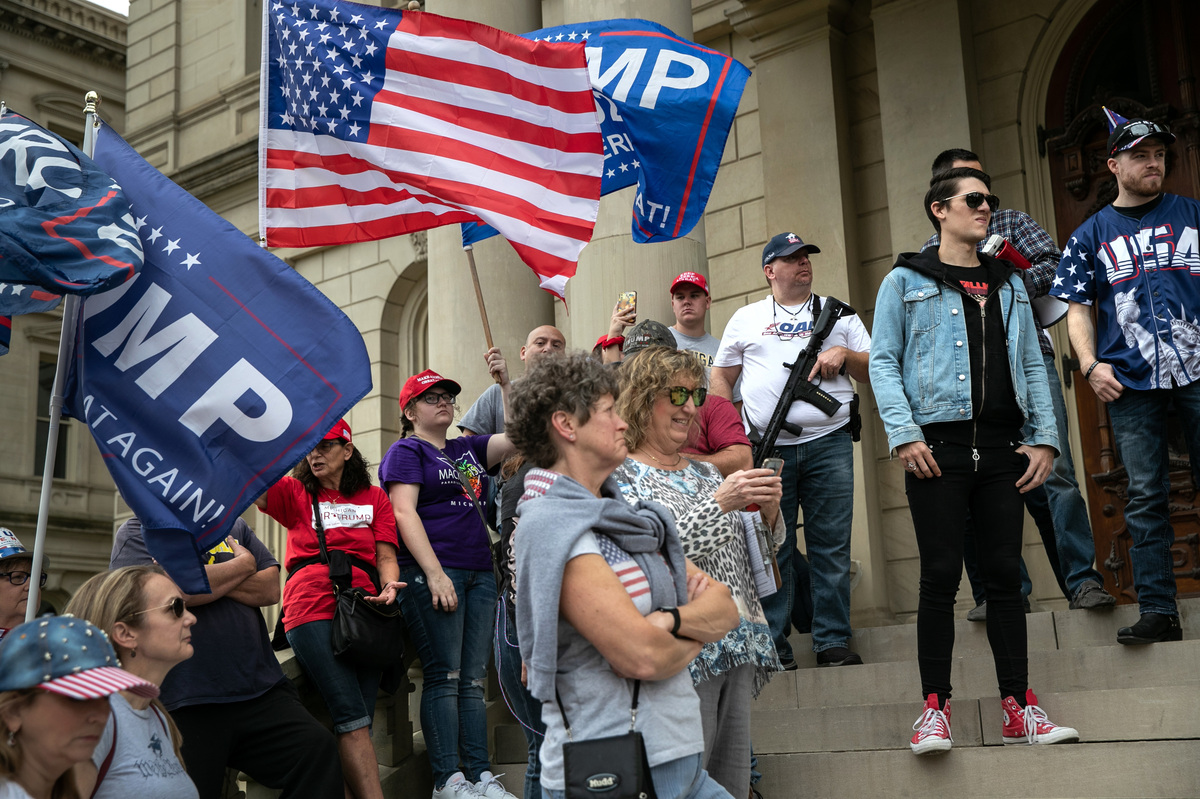 Trump supporters demonstrate Sunday at the Michigan Capitol in Lansing.

One final big question about the Trump transition concerns the outgoing chief executive himself. In addition to the White House, Air Force One, the hulking limousine known as "The Beast" and other trappings of power, Citizen Trump will lose the de facto immunity he has enjoyed from prosecution.

Some opponents allege that Trump may have broken one or more federal laws while in office connected with the Russia investigation; he may have obstructed justice in attempting to fire then-special counsel Robert Mueller, and he may have lied to Mueller's investigators, these critics argue.

Trump, then and now, denies any wrongdoing.

But Trump's business and financial practices also have come under scrutiny from local authorities in New York City and possibly elsewhere.

His former attorney Michael Cohen — who went to prison in connection with helping to arrange a scheme in which two women were paid to keep quiet about their affairs with Trump — has alleged practices by Trump's businesses that could leave him open to prosecution.

So Trump's conduct in the remaining weeks of his presidency may not only be important in terms of Washington governance, but also how he casts himself in the eyes of Americans. If he convinces enough people he's a victim of politically motivated hounding, he helps his prospects with the members of any potential future jury.

The president's legal problems also have prompted questions about whether Trump might issue a pardon for himself — something no president has ever attempted.

Trump has asserted he has the power to pardon himself but didn't feel the need to use it because he hadn't done anything wrong.

Supreme Court Justice Amy Coney Barrett was asked about a self-pardon at her confirmation hearings last month, and she declined to opine about it — because she said it might be an issue that could come before her on the high court.

Whatever the results of an extraordinary attempt at a self-pardon, it wouldn't necessarily solve all of Trump's problems. He would still be subject to prosecution by state or other authorities, and at least one criminal case already is underway, launched by Manhattan District Attorney Cyrus Vance.

The issues involving Trump's actions and prospective criminal consequences, as NPR's Carrie Johnson has reported, could be some of the toughest early decisions to confront the Justice Department under the new administration.