Accessibility links
Soccer Star Megan Rapinoe On Equal Pay, And What The U.S. Flag Means To Her Rapinoe has also been an outspoken advocate for pay equity and the Black Lives Matter movement. "I see patriotism as constantly demanding better of ourselves," she says. Her new book is One Life. 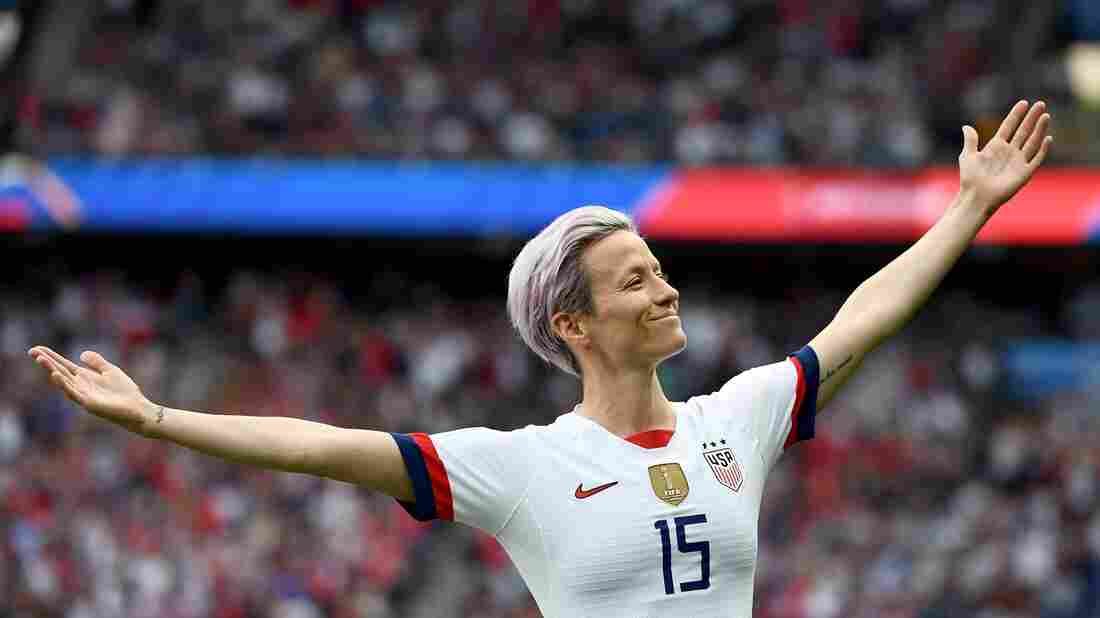 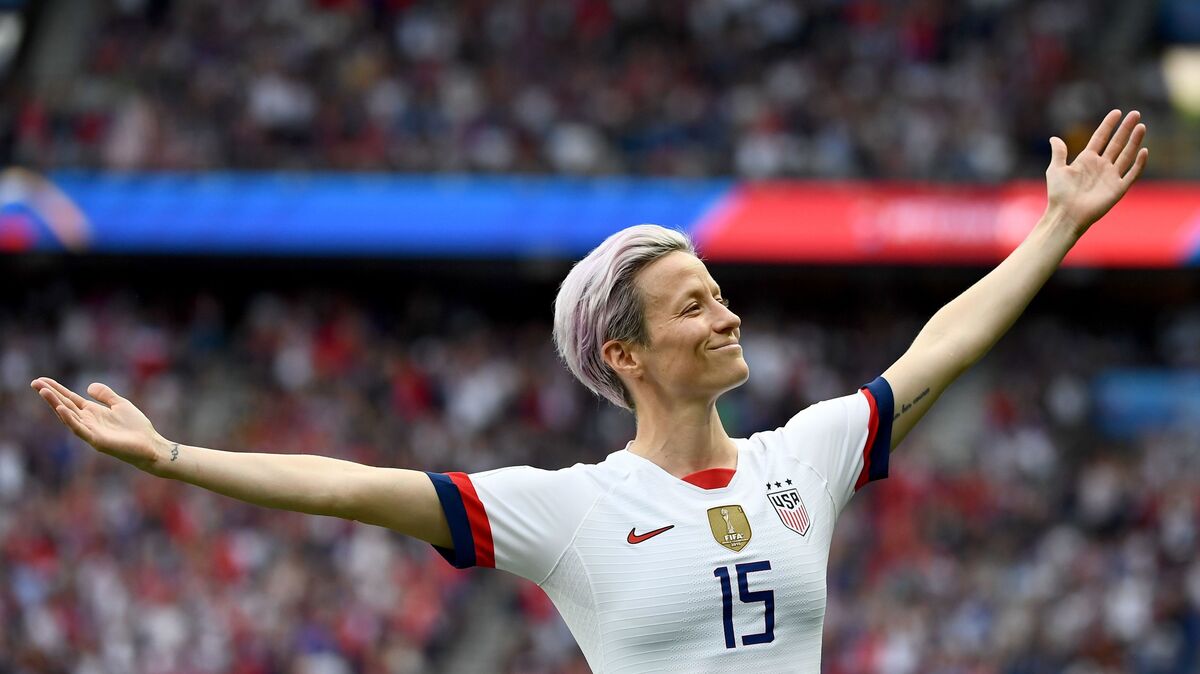 In the 2019 Women's World Cup finals, when the final whistle blew and the U.S. team stormed the field in celebration, thousands of fans chanted, "Equal pay! Equal Pay!"

The U.S. Women's National Team, co-captained by Megan Rapinoe, has been a symbol of gender equality ever since they filed a lawsuit in March 2019 against the U.S. Soccer Federation alleging pay discrimination.

Members of the women's soccer team earn significantly less than their male counterparts — despite the fact that their team has been more successful and more profitable. (The women's team has won four World Cup tournaments; the men's team has never won the World Cup.)

Rapinoe says that when it comes to pay equity, the U.S. is due for a "paradigm shift" in how we understand the value and potential of women.

A federal judge dismissed the claim in May 2020, but the team plans to file an appeal.

"The amount of money that [the women's team players] could possibly earn in our contract — compared to the amount of money that the men could possibly earn in the contract — is very different," Rapinoe says. "We've been very successful ... and to get paid about the same dollar-for-dollar amount [as the men] — that's sort of at the heart of pay inequity and gender discrimination. "

Rapinoe has also been an outspoken advocate for the Black Lives Matter movement. In 2016, she was among the first high-profile white athletes to take a knee during the national anthem, in solidarity with Colin Kaepernick.

Rapinoe writes about her life on and off the field in the new memoir, One Life.

On the repercussions she faced after taking a knee 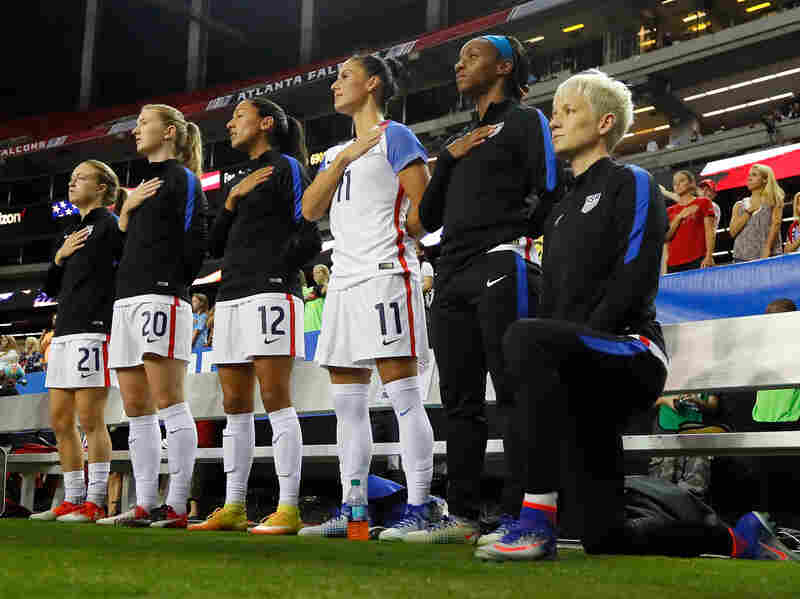 Megan Rapinoe kneels during the National Anthem prior to the match between the United States and the Netherlands in Atlanta, Ga., on Sept. 18, 2016. Kevin C. Cox/Getty Images hide caption 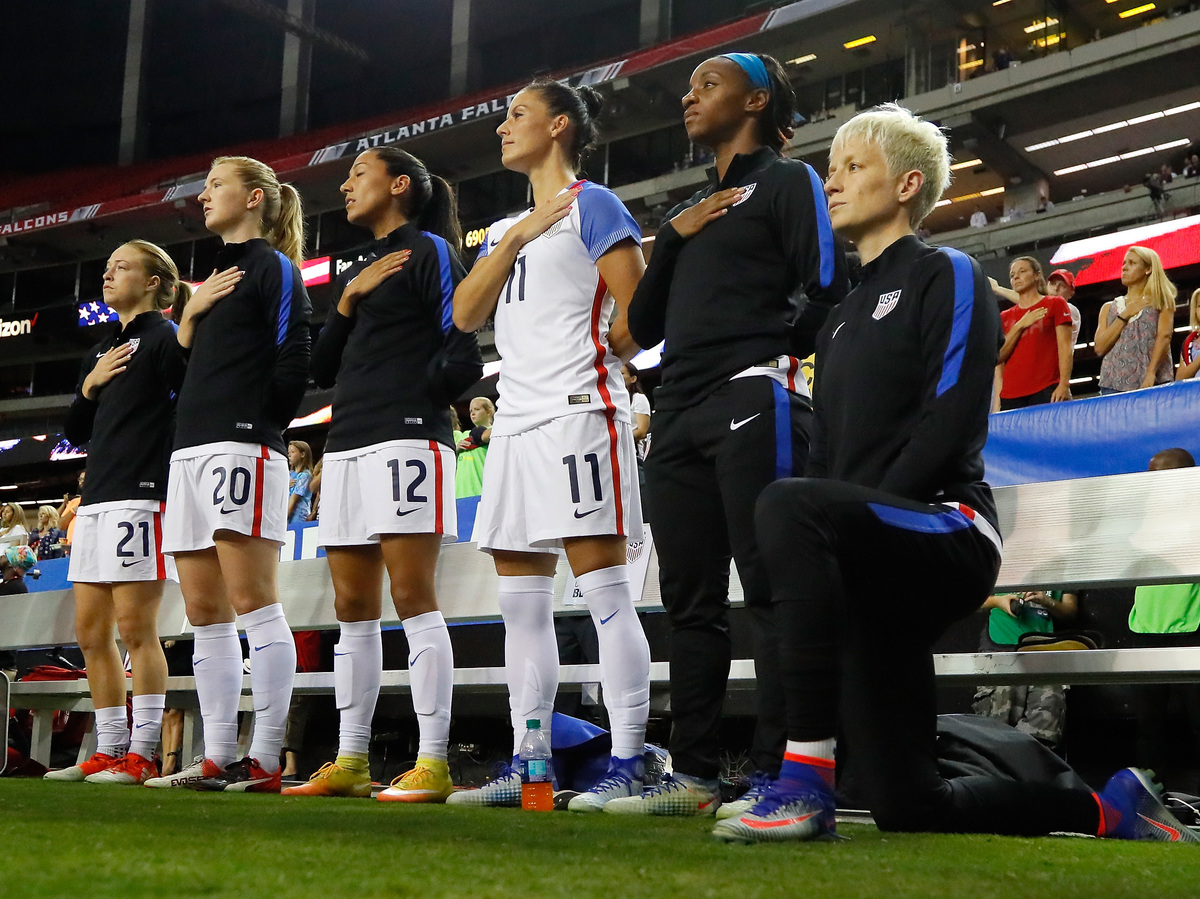 Megan Rapinoe kneels during the National Anthem prior to the match between the United States and the Netherlands in Atlanta, Ga., on Sept. 18, 2016.

So this is where the gray part comes in. I had played in those two games in the first two games that I had knelt. I think that was in October. So we had a November camp and I was coming off of an injury. So I wasn't really at my best, but I was clearly on the way back to my best. We just won the World Cup, I was a big part of that team. And I think it was all signs relating to I was going to be coming back and playing back to my best, but I just needed time. And so that was sort of used as an excuse. ... I was left off the next roster and the next roster. So it just was one of those things where it's like I think they were like, if you just sort of fade off into the distance, we'd be happy with that. I never lost my contract. But no, they did not really allow me back on the field until the rule was instituted that you had to stand for the national anthem during our games. So I felt like I was pushed out and not allowed to play purposely because I knelt.

On if she regrets kneeling

No, no, no, definitely not. I mean, I think honestly, the only thing that that I regret maybe was when I came back that I didn't keep kneeling. That's something that I feel like I still struggle with. I didn't want to lose my job. I didn't want to not have a platform to talk on. I didn't want to not keep playing for the national team. And so that was a really tough decision. I mean, I think in one sense, I probably made the right decision because I sort of battled back and got to a level where I was then undeniable. And then they had a really big problem on their hands because I really wasn't going anywhere.

We win a lot because we really, truly, deep down believe that we're going to win. I think that comes from battling against each other all the time and understanding that it takes more than just a desire to win to win. It takes a belief, it takes a determination, and it takes hard work. It takes a trust and it takes a vulnerability with each other to show up in that way, and to be able to kind of lay it out all on the line all the time. I've been in so many games, honestly, where I feel like the other team is too insecure to show how much they want to win. And so they just don't. There's no insecurity on our team about that. We will embarrass ourselves to the nth degree to win a game. ... I feel like other teams, like want to win, of course, because you're playing in a game and that's the whole point, you want to win. But to [want to win] in a very raw way, in a very vulnerable way, just be like, we don't care if we're down 4 - 0, we will never give up. We don't care if we look stupid or whatever. We just focus on winning and never giving up.

On coming out publicly in 2012 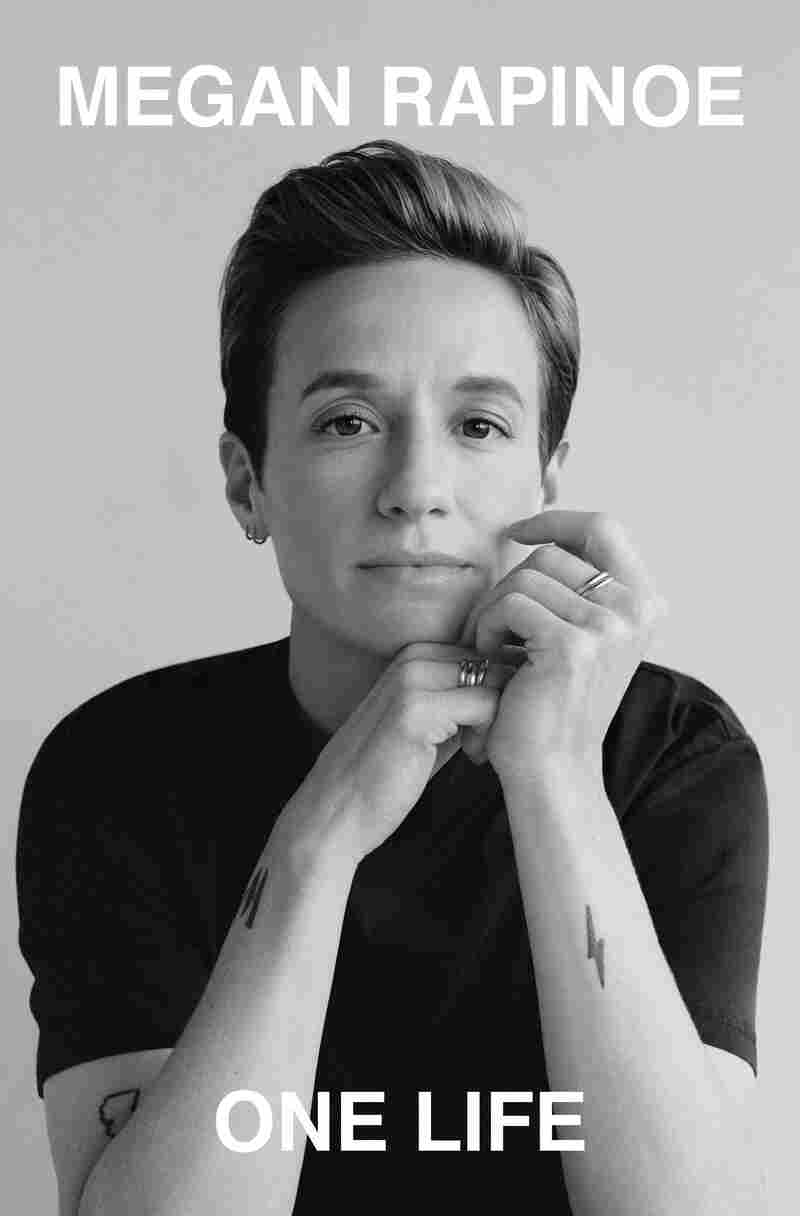 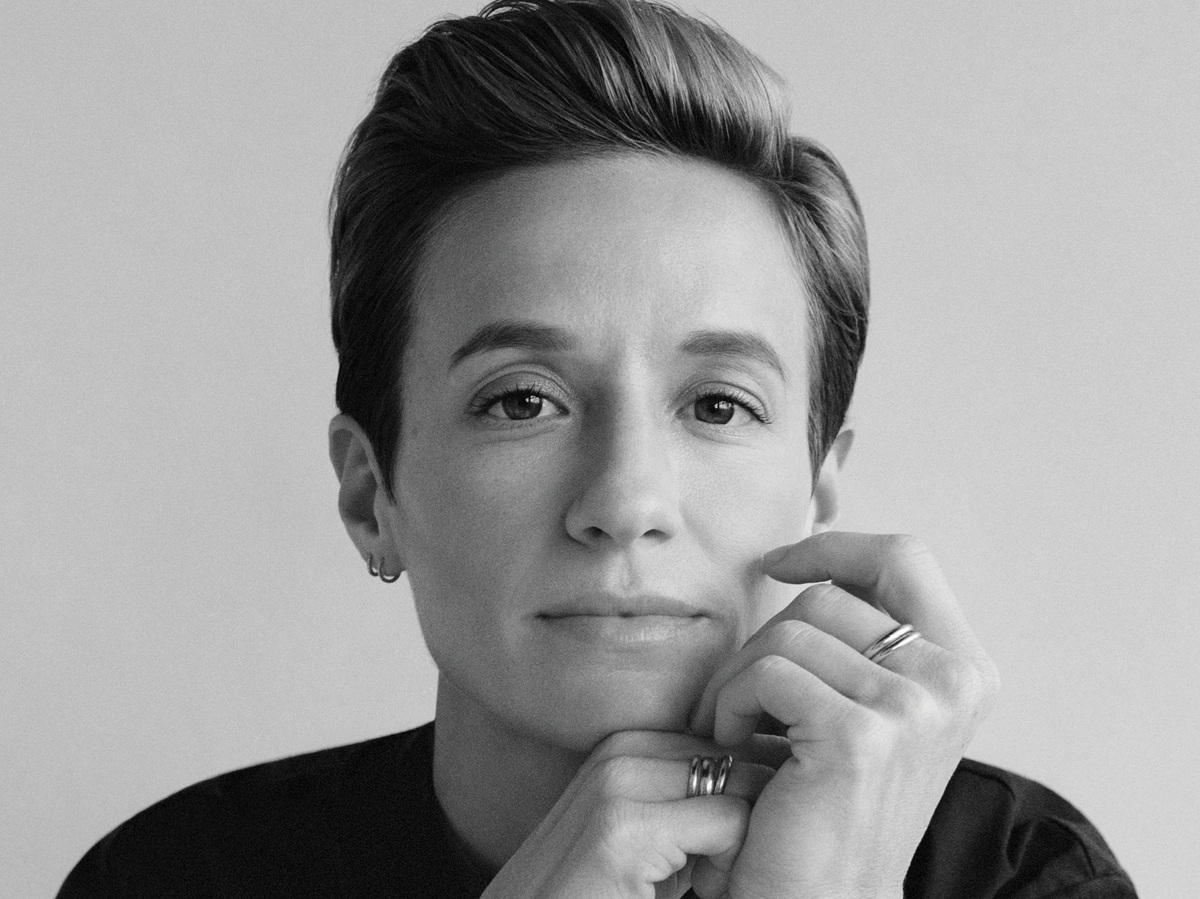 One Life, by Megan Rapinoe

Publicly, I think a lot changed. I still to this day have people coming up to me or writing to me or whatever it may be, thanking me or saying, I'm the reason they felt OK with themselves or I'm the reason their family was OK or parents coming up to me who very clearly have little budding gay children. And even if it's an unspoken thing, they see themselves in me. They see a future for their children that isn't just all about the stereotype that you hear, which is how hard life is to be gay. And not to say that life isn't difficult being gay. For a lot of people, it really is. But it's not all bad. It's not all struggle. Whenever I go into a room like we don't have to talk about the fact that I'm gay or an interview or whatever doesn't have to be all about that. But I'm very out and proud and will show that and will live a very out and open life. And I think that that's vital for people to see.

On trying to reconcile the fact that her older brother Brian, who has been in and out of prison on drug charges, got a swastika tattoo while in prison

I think that we do not understand as people who have never been in prison, I don't think we really understand [that] prison society is very different from normal society. Not like a wholesale excuse for anybody who does anything bad in prison. But I think that the rules are different. I think also, like multiple things can be true at one time. Things are complicated. So maybe that is where he found a sense of community or he found a sense of belonging or just protection. When your life is on the line, I think pretty much anybody would do anything in their power to save it. And so while it was just baffling and sort of devastating to even know that it was like, OK, well, what does it mean? And talk to us about it. Why did you do this? ...

I think that a lot of the tension was made or I guess the tension between the groups was wanted by the prison system to sort of keep everybody in line. It's like, as long as all the prisoners are fighting each other, they're not going to organize and fight against the system that's suppressing them all and locking them away forever and ruining lives. And so I think he kind of started to realize through his journey that, we're all fighting amongst each other, but maybe we really should be fighting against the prison system, or against mass incarceration, or the drug laws or the three strikes rule or whatever. ...

It's never excusable ever. White supremacy is just as dark of a human belief that you could possibly have. But I want to understand it better rather than just say, "Holy s---, you're a white supremacist. I'm never gonna talk to you again."

On what the American flag means to her, as someone who represents the U.S. National Team

What I think that the flag should mean is, like, an impossible standard in which we are always trying to get to. We're not there. We were never there. First of all, the country was founded not on freedom and liberty and justice for all. I think we can just start to be very honest with ourselves about that. It doesn't mean that we don't have some of those qualities and that we can work towards some of those qualities. But this country was founded on chattel slavery and the brutal and ruthless system of slavery. So let's all be really honest about that.

I see patriotism as constantly demanding better of ourselves.

So when I look at the flag, what I want to see is us constantly trying to live up to these words and live up to this ideal where all people are free, and all people do have all of the rights, and all people can have a life filled with liberty and justice for all. ... But I think we just so clearly have so far to go. And so I see patriotism as constantly demanding better of ourselves.

Lauren Krenzel and Kayla Lattimore produced and edited this interview for broadcast. Bridget Bentz, Molly Seavy-Nesper and Meghan Sullivan adapted it for the Web.