Accessibility links
Biden Immigration Policies Could Hinge On The Senate President-elect Biden is expected to quickly reverse some of the Trump administration's most controversial policies. But his ability to reshape immigration would be limited in a divided government. 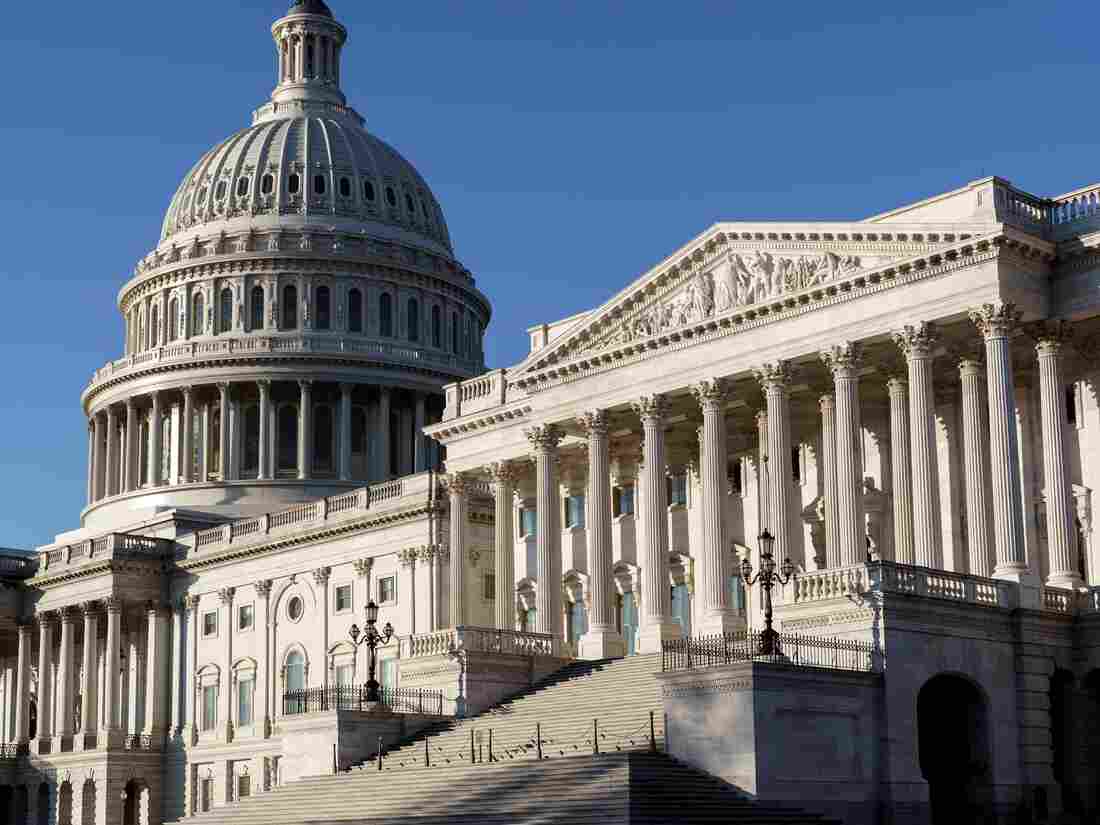 The Senate side of the Capitol is seen in Washington, D.C., early Monday. Experts say President-elect Joe Biden's ability to reshape the U.S. immigration system will be sharply limited if Republicans retain control of the Senate. J. Scott Applewhite/AP hide caption 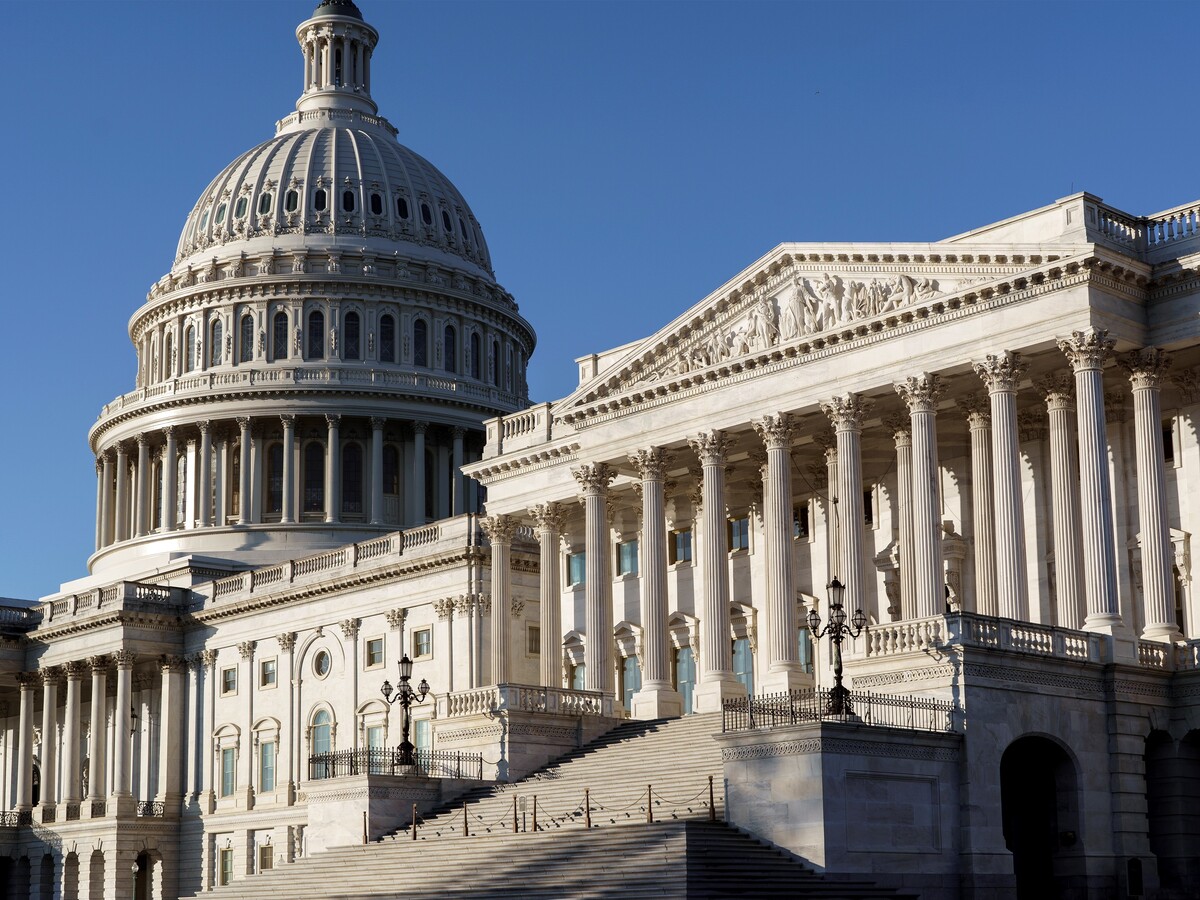 The Senate side of the Capitol is seen in Washington, D.C., early Monday. Experts say President-elect Joe Biden's ability to reshape the U.S. immigration system will be sharply limited if Republicans retain control of the Senate.

When President Trump took office, he quickly unleashed a torrent of immigration policies — including his first "travel ban" on people from majority-Muslim countries.

President-elect Joe Biden is now expected to reverse that policy — along with other controversial Trump administration actions — in the first days of his administration.

But other recent changes to the U.S. immigration system may take months, if not years, to unwind. And experts say Biden's ability to reshape the country's immigration system will be sharply limited if Republicans retain control of the Senate.

The Trump administration has taken more than 400 executive actions, slashing the flow of legal immigrants to a fraction of what it was when he took office, according to Sarah Pierce, a policy analyst at the Migration Policy Institute, a Washington, D.C., nonprofit.

Trump's And Biden's Plans On Immigration

"Protecting DACA is the floor, not the ceiling"

"The easiest will be those that can be reversed with one administrative action, such as an executive order, but don't come with heavy logistical challenges," Pierce said during a conference with reporters on Monday.

Trump policies that could be reversed relatively quickly include the travel bans on people from 13 countries, many of them with majority-Muslim populations.

The Biden administration is also expected to extend DACA, or Deferred Action for Childhood Arrivals, the Obama-era policy that protects from deportation immigrants who were brought to the country illegally as children.

Pierce said the Biden administration is expected to reinstate DACA in full, allowing applications from tens of thousands of immigrants who have become eligible since 2017, when the Trump administration tried to terminate the program.

"We're glad to see the Biden transition team is preparing to roll back Trump's policies that have detained, deported and killed immigrants," said Greisa Martinez Rosas, the executive director of United We Dream and a DACA recipient. "Protecting DACA is the floor, not the ceiling, of what a Biden-Harris administration must do."

Confront a challenging situation at the U.S.-Mexico border

Many of the Trump administration's changes to immigration policy were enacted through regulation and may take longer to undo, including the "public charge" rule that allows the government to deny green cards to immigrants who are considered likely to use public benefits.

The incoming president will also confront a challenging situation at the U.S.-Mexico border.

Biden said during the campaign that he wants to lift the Trump administration's restrictions on asylum for migrants fleeing gangs and domestic violence. But it's unclear how the incoming administration would approach a central component of those restrictions known as Remain in Mexico, or, by its official title, the Migrant Protection Protocols. That policy has forced more than 60,000 migrants to wait for their day in U.S. immigration courts in dangerous Mexican border towns.

Technically, the Biden administration could end Remain in Mexico with the stroke of a pen — but the logistics of what would happen next are more complicated.

"They really are in a difficult situation politically," said Mark Krikorian, executive director of the Center for Immigration Studies, which advocates for lower levels of immigration.

Krikorian said Remain in Mexico has been successful at deterring migration from Central America. If Biden puts a halt to the policy, Krikorian argues, "that sends the message to people in El Salvador and Honduras and Guatemala that it's go time," potentially creating a new surge of migrants at the southern border.

Ultimately, Biden's ability to overhaul the nation's immigration system will depend largely on which party controls the Senate. The president-elect has promised to send legislation to Congress in the first 100 days of his administration that would create a pathway to citizenship for an estimated 11 million immigrants living in the country illegally.

But that bill — as well as any other ambitious agenda items that require congressional approval — would face an uphill battle if Republicans retain control of the Senate.

Short of that, a Biden administration could still use its executive authority to reshape the immigration system piece by piece, as the Trump administration has done.

"The Biden people can undertake a level of change in immigration policy that will dwarf anything Trump did even without getting anything through Congress," said Krikorian, who argues that federal courts may be more receptive to Biden's immigration agenda than they were to Trump's.

But other observers say that's unlikely.

"During the Trump administration, immigration was the top policy priority," Pierce said. "They poured everything they had into enacting their agenda. I think under a Biden administration, we're about to see the pace of immigration changes slowed down significantly."