Accessibility links
Longtime Palestinian Negotiator Saeb Erekat Dies Of Complications From COVID-19 Often the voice of the Palestinians in peace talks with Israel, Erekat's pursuit of peace through negotiation never prevailed. He was 65. 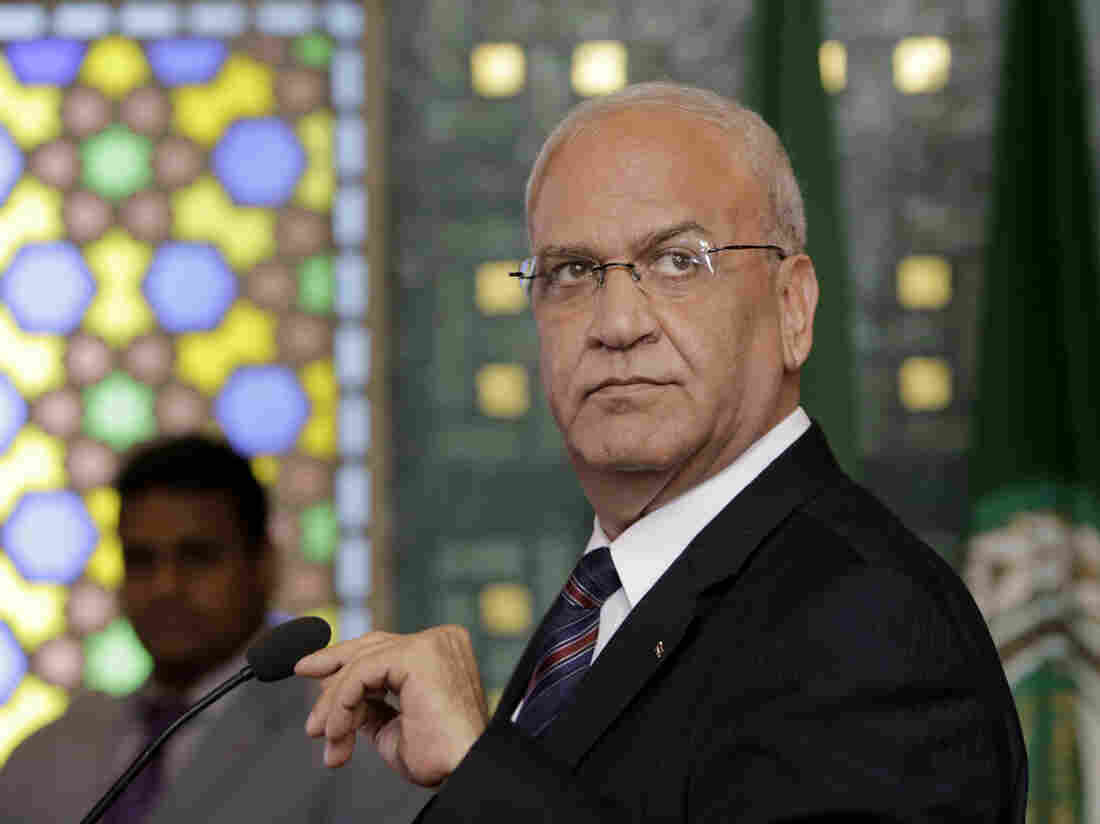 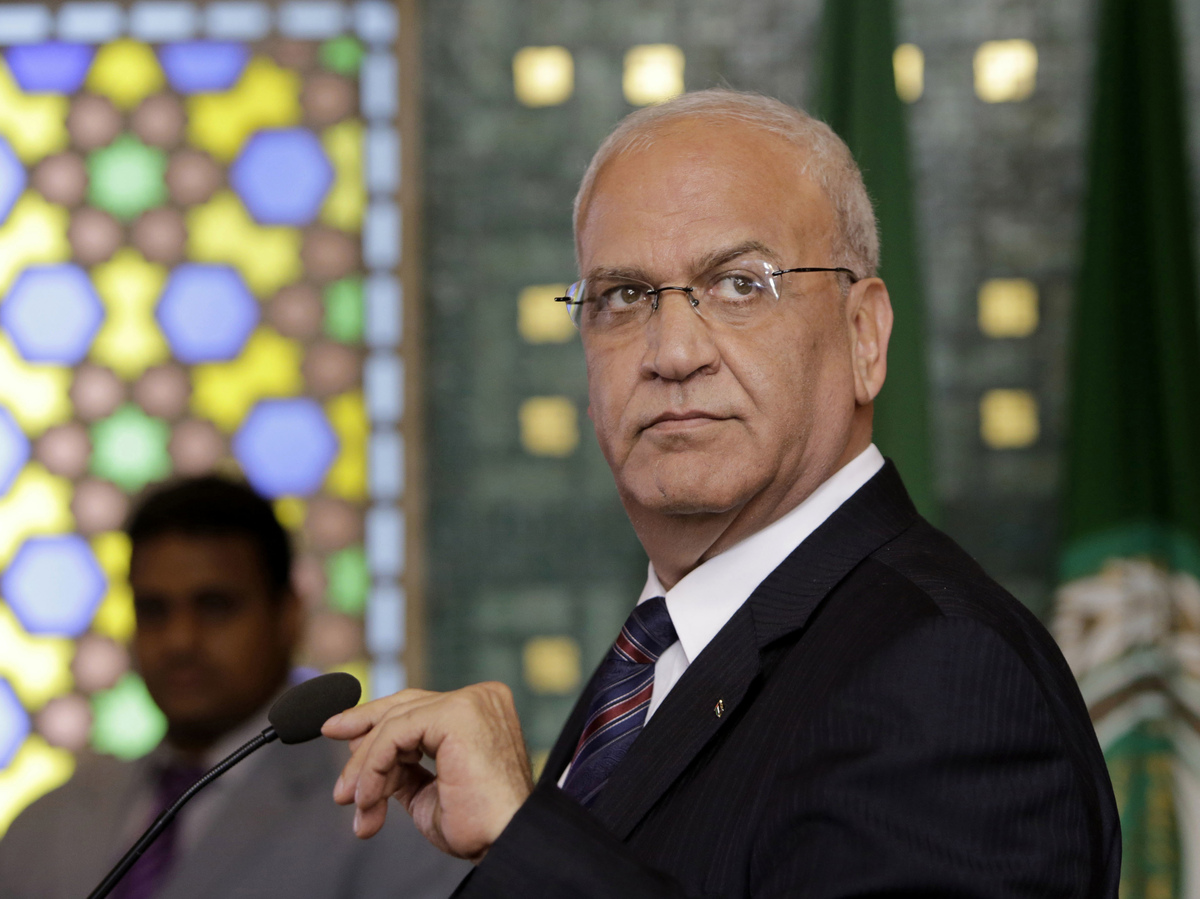 Saeb Erekat, a tenacious negotiator who helped forge some of the few political gains for Palestinians over more than two decades of on-again, off-again talks with Israel but who was ultimately frustrated by the two sides' failure to achieve a final peace settlement, died Tuesday from complications of COVID-19.

Erekat, 65, was being treated in Hadassah University Hospital Ein Kerem, in Jerusalem. His death was announced by his family on Facebook, his Palestinian political party Fatah, and confirmed to NPR by his spokesman, Xavier Abu Eid.

Palestinian President Mahmoud Abbas declared three days of mourning in Palestinian Authority-ruled areas of the Israeli-occupied West Bank. He called Erekat a "great fighter who had a great role in raising the banner of Palestine high and defending the rights of our people...in all international forums."

A longtime adviser to Palestine Liberation Organization Chairman Yasser Arafat, Erekat at the time of his death was secretary-general of the PLO Executive Committee and a close ally of Palestinian Authority President Mahmoud Abbas. Erekat served as chief Palestinian negotiator for decades, struggling to reach agreement with Israel for an end to the occupation of the West Bank and Gaza Strip and the establishment of an independent Palestinian state.

Erekat was deeply involved in peace negotiations since Israelis and Palestinians held their first conference in Madrid in 1991, serving as the deputy head of the Palestinian delegation.

Peace efforts peaked with the 1993 Oslo Accords, which led to the creation of the Palestinian Authority. In 1995, Erekat helped write the text of a follow-up agreement, known as Oslo II, mapping out areas where the PA would have limited self-rule in the West Bank and Gaza. 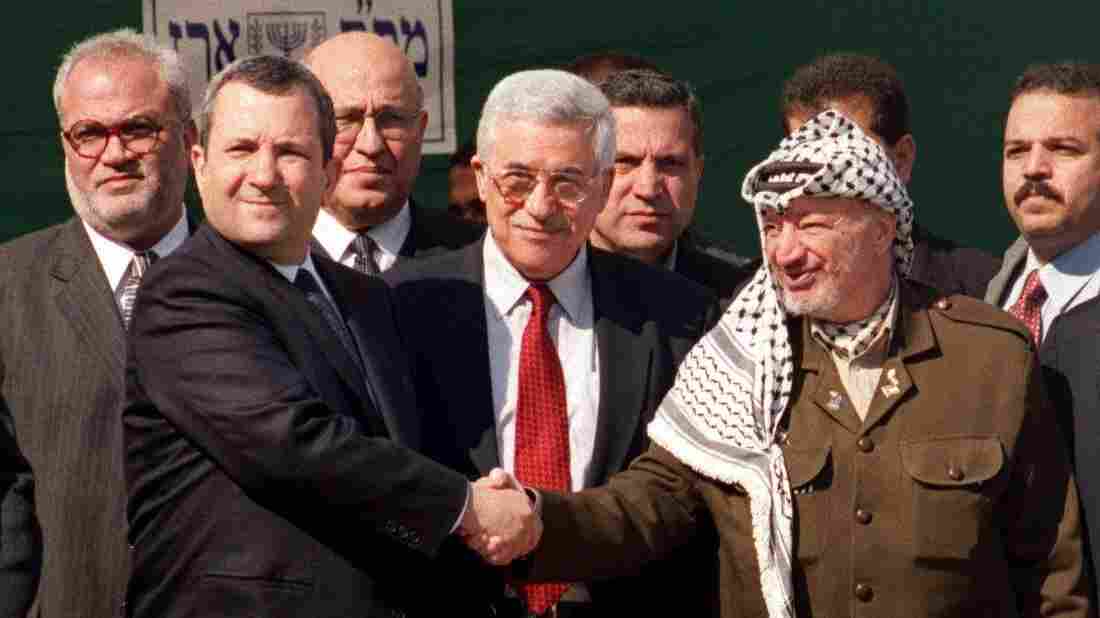 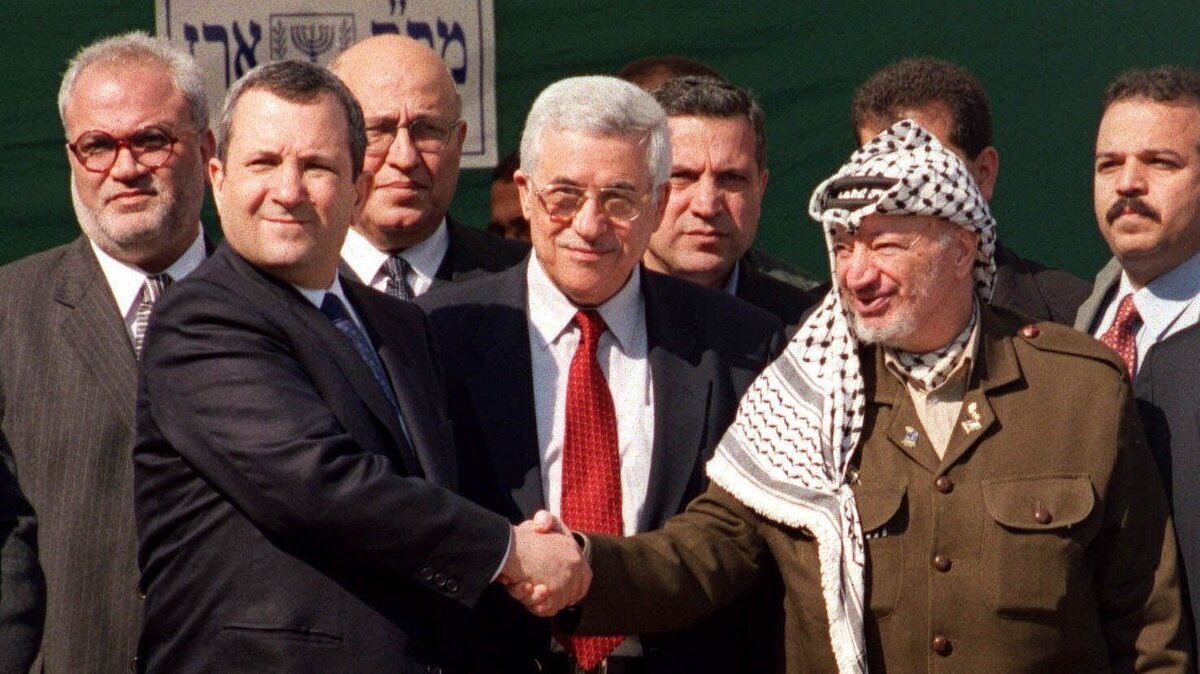 Chief Palestinian negotiator Saeb Erekat (farthest to the left), with Israeli and Palestinian officials as Israeli Prime Minister Ehud Barak (left) and PLO Chairman Yasser Arafat (right) shake hands before a summit at the Erez Crossing in the Gaza Strip in 2000.

The Oslo process was supposed to lead to a permanent peace agreement in 1998. Instead, Erekat spent the rest of his life trying to keep the process alive as it stalled. In an interview with NPR in 2010, Erekat looked back wistfully on the Oslo period.

"I thought that it was a turning point in our history, it was a new chapter," he said. "I thought that life will never be the same for us, Palestinians and Israelis. Unfortunately I was proven wrong."

The Palestinian uprising of the early 2000s, known as the Second Intifada — with devastating Palestinian suicide bombings in Israel and intense Israeli military offensives in Palestinian population centers — dealt a severe blow to hopes for peace, which have since all but vanished. Israel's continued construction of Jewish settlements in the West Bank and its separation barrier have closed off much of the land Palestinians seek for their state.

Meanwhile, many Palestinians came to blame leaders like Erekat for negotiating an arrangement that, instead of producing independence, kept Palestinian life under Israeli control. Many Palestinian politicians enriched themselves with funds from international donors and monopolies over resources, while internationally trained Palestinian security forces helped Israel patrol Palestinian areas and were seen by Palestinians as suppressing their struggle against Israel.

Even Erekat's admittance to an Israeli hospital last month sparked controversy from both Palestinians and Israelis, highlighting the deep divisions that dogged his life's work.

Palestinian Canadian Diana Buttu worked with Erekat during the years of negotiations. "I will remember him as the person who tried, who tried," she told NPR.

Born in 1955 and raised in the West Bank city of Jericho, Erekat was educated in the United States and Great Britain. He received his undergraduate and master's degrees in international relations at San Francisco State University and a Ph.D. in peace studies at England's University of Bradford. At the time of his death Erekat was professor of political science at An-Najah National University in Nablus.

Erekat was sharp-tongued and highly critical of Israel, but had an affable personality and forged friendly relations with his Israeli interlocutors. He served on the board of Seeds of Peace, a peace-oriented summer camp in Maine for Arab and Israeli youth. Three of his four children attended.

As peace efforts failed, Palestinians and Israelis grew farther apart, and many Palestinians came to see talks as futile. Buttu thinks Erekat was willing to give away too much.

"He was really wedded to this idea that negotiations were a useful tool," Buttu said. "Even at a time when others saw the light and saw that the negotiations process wasn't working ... he was saying 'yes' to things when he should have just walked out of the room."

But Erekat had his admirers, including Joel Singer, one of his Israeli negotiating counterparts during the Oslo process.

That was not the view of many Israelis, though, especially as the country has trended rightward under a decade of leadership by Prime Minister Benjamin Netanyahu.

While some Palestinians accused Erekat of offering too much, many Israelis blamed him and Palestinian leaders for never saying yes to a final peace deal. When word spread that Erekat was in line for a lung transplant from an Israeli hospital, some Israelis tore up their organ donor cards in a show of contempt. Erekat ultimately received his lung transplant in the United States in 2017.

Erekat announced his coronavirus infection on Oct. 8. Ten days later he was transferred from his home in the West Bank city of Jericho to Hadassah, the Israeli hospital in Jerusalem. He was admitted in critical condition, requiring immediate ventilation and resuscitation, the hospital said in a statement. For three weeks, Erekat received intensive care including from a heart-lung machine, and died following multi-organ failure, the hospital said.

Some Israelis and Palestinians criticized Erekat for seeking treatment at an Israeli hospital. But Hadassah extended "condolences to his family, admirers, friends and the Palestinian People." Israeli Prime Minister Benjamin Netanyahu had no immediate comment.

Peace did not come in Erekat's lifetime – something he reflected on in his conversation with NPR in 2010.