Accessibility links
Biden Plans To Reopen America To Refugees After Trump Slashed Admissions The president-elect pledges to welcome as many as 125,000 refugees a year — up from the Trump administration's record-low cap of 15,000. Here are some challenges that await. 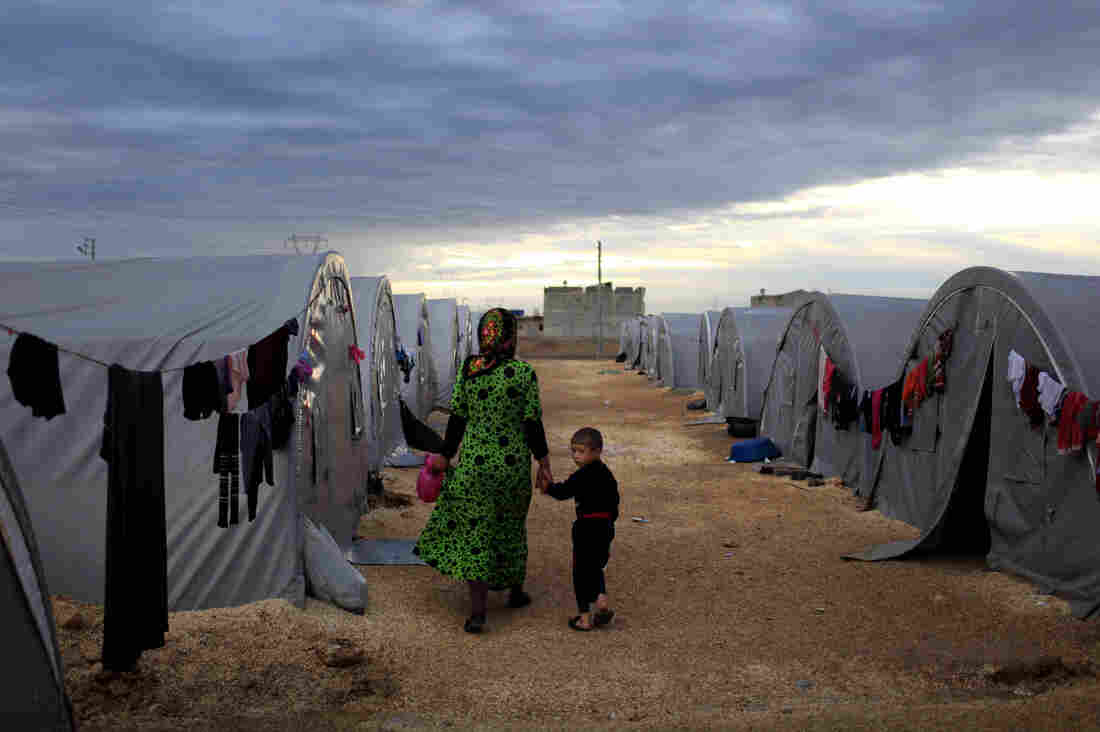 A Kurdish refugee mother and son from the Syrian town of Kobani walk beside their tent in a camp in the Turkish town of Suruc on the Turkish-Syrian border in 2014. President-elect Joe Biden aims to reverse the Trump administration's dramatic cuts to refugee admissions. Gokhan Sahin/Getty Images hide caption 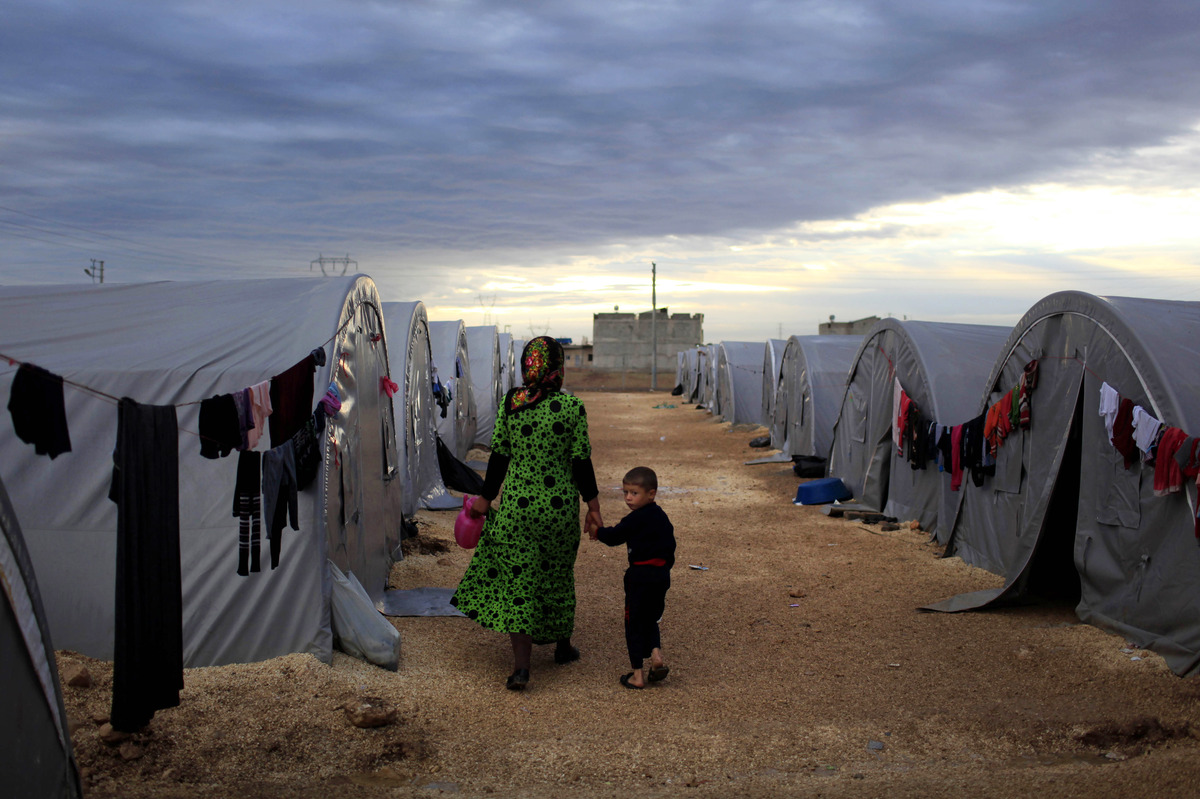 A Kurdish refugee mother and son from the Syrian town of Kobani walk beside their tent in a camp in the Turkish town of Suruc on the Turkish-Syrian border in 2014. President-elect Joe Biden aims to reverse the Trump administration's dramatic cuts to refugee admissions.

President-elect Joe Biden has pledged to reassert America's commitment to refugees after the Trump White House's slashing of the resettlement program, part of the current president's anti-immigration drive.

In 2016, President Barack Obama aimed to admit 110,000 refugees. President Trump lowered the cap on refugee admissions every year of his presidency. For fiscal year 2021, he set the cap at 15,000, the lowest on record.

Biden promises to take a starkly different approach from his predecessor: to "set the annual global refugee admissions cap to 125,000, and seek to raise it over time."

For decades, the United States led the world in offering protection to people fleeing persecution in other countries. Now the Biden presidency will mark a return to the political consensus that the U.S. should continue to do so, refugee policy experts say.

But while the president has the authority to set refugee admissions numbers, it will take time to rebuild the nation's resettlement program after four years of the Trump administration largely dismantling it, according to Becca Heller, executive director of the International Refugee Assistance Project.

"The point is not to hit 125,000 — the point is to signal both to the rest of the world and also to the domestic population in our own government that this is a priority again," Heller says. "It's less relevant if we hit the exact number and more relevant that we say, 'Admitting refugees is really important. We are going to aim at this high number and invest in infrastructure and get as close as we can.' "

Here's a look at some of the main challenges ahead for the Biden presidency as it seeks to roll back the sweeping changes to the refugee program.

Budget cuts have gutted the infrastructure for resettling refugees

Nine religious or community-based organizations known as resettlement agencies have contracts with the State Department to resettle refugees.

The agencies' budgets are based on the number of refugees admitted. Low admission levels reduced government funding, which decimated programs supporting newly arrived refugees. After the State Department told them to pare their operations, many agencies had to shutter or scale back offices and lay off workers.

"We're looking at a very big ramp-up because over the last four years, there's been an 85% cut and an effective demolition of the refugee resettlement program," says David Miliband, president and CEO of the International Rescue Committee, the largest of the nine resettlement agencies.

The backlog is huge

More than 120,000 refugees are in the pipeline, passing rigorous security and medical checks, waiting in line, sometimes for years. In addition, thousands of Iraqis who worked for the U.S. military and are now at risk are waiting too. In 2020, there were 4,000 slots for Iraqis who aided the U.S. military, but only 123 were resettled.

Those seeking refuge in the U.S. have to submit to interviews with immigration officers and security officers. In Iraq, interviews slowed to a trickle last year with the withdrawal of nonessential employees from the U.S. Embassy in Baghdad.

Refugees are scrutinized more thoroughly than any group that comes to the U.S.

The Trump administration added new "extreme vetting" requirements, and that is swelling the backlog of applicants, says Heller, of IRAP.

"Extreme vetting is really inefficient. It's not better vetting by redundancies that are unnecessary or busy work for the intelligence community," Heller says. The new vetting rules were kept secret until IRAP sued to force a disclosure.

The Refugee Act of 1980 established the mechanism for resettlement, including the president's annual determination on refugee arrivals and a provision for consultations with Congress that sets the annual budget for the resettlement program.

That's the way it's supposed to work — but the Trump administration consistently ignored the provision to confer with lawmakers, according to refugee advocates.

So far, the election has produced a divided Congress. Members may not have the appetite to take on immigration policy amid the coronavirus pandemic and an economic recession, says Muzaffar Chishti of the Migration Policy Institute. The Biden administration will also be consumed by the COVID-19 crisis.

"For the first 100 days, there will be very little bandwidth for a Biden administration to deal with anything other than COVID. We have never faced a crisis like this before," Chishti says. "We can't expect a huge leap on immigration policy. If people expect that this is going to happen tomorrow, they will be in for a big disappointment."