Accessibility links
Interview: Kathleen Rooney, Author Of 'Cher Ami And Major Whittlesey' Kathleen Rooney's new novel follows an unlikely subject: Cher Ami, the once-famous homing pigeon who helped save a trapped battalion during World War I, and the officer who owed his life to her. 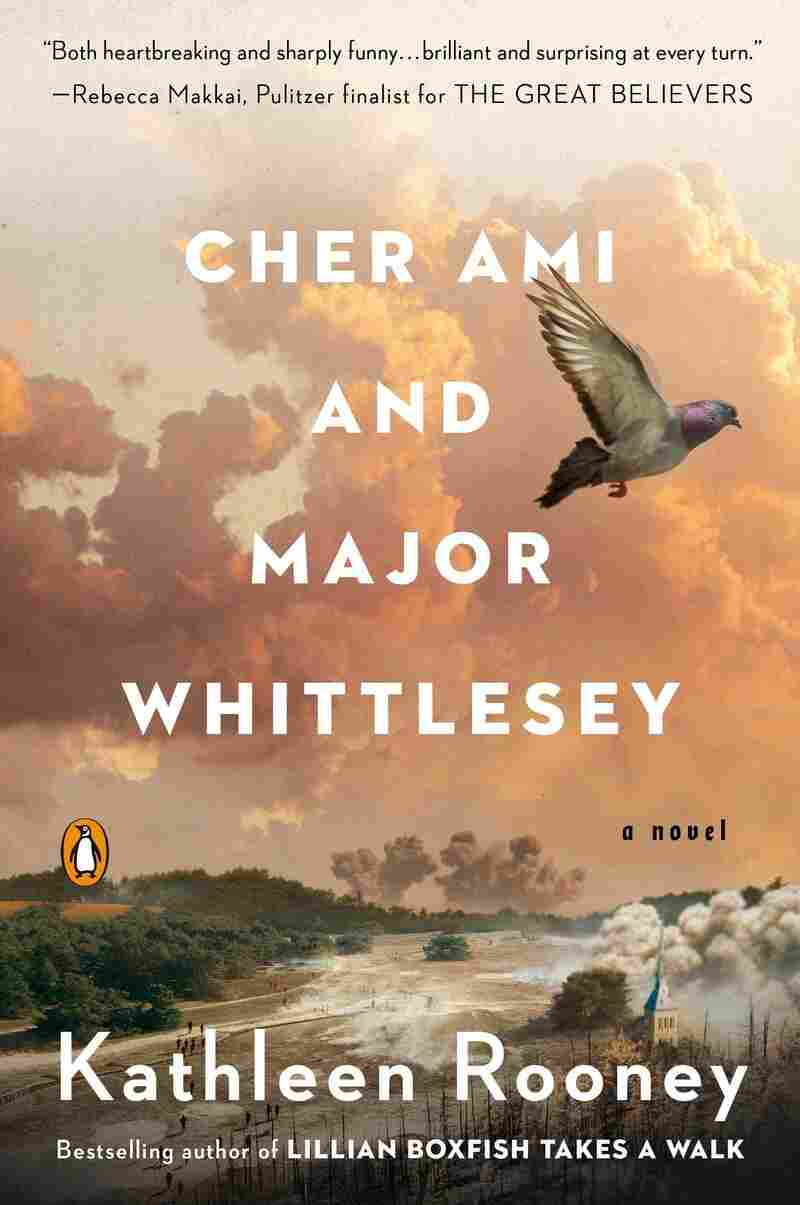 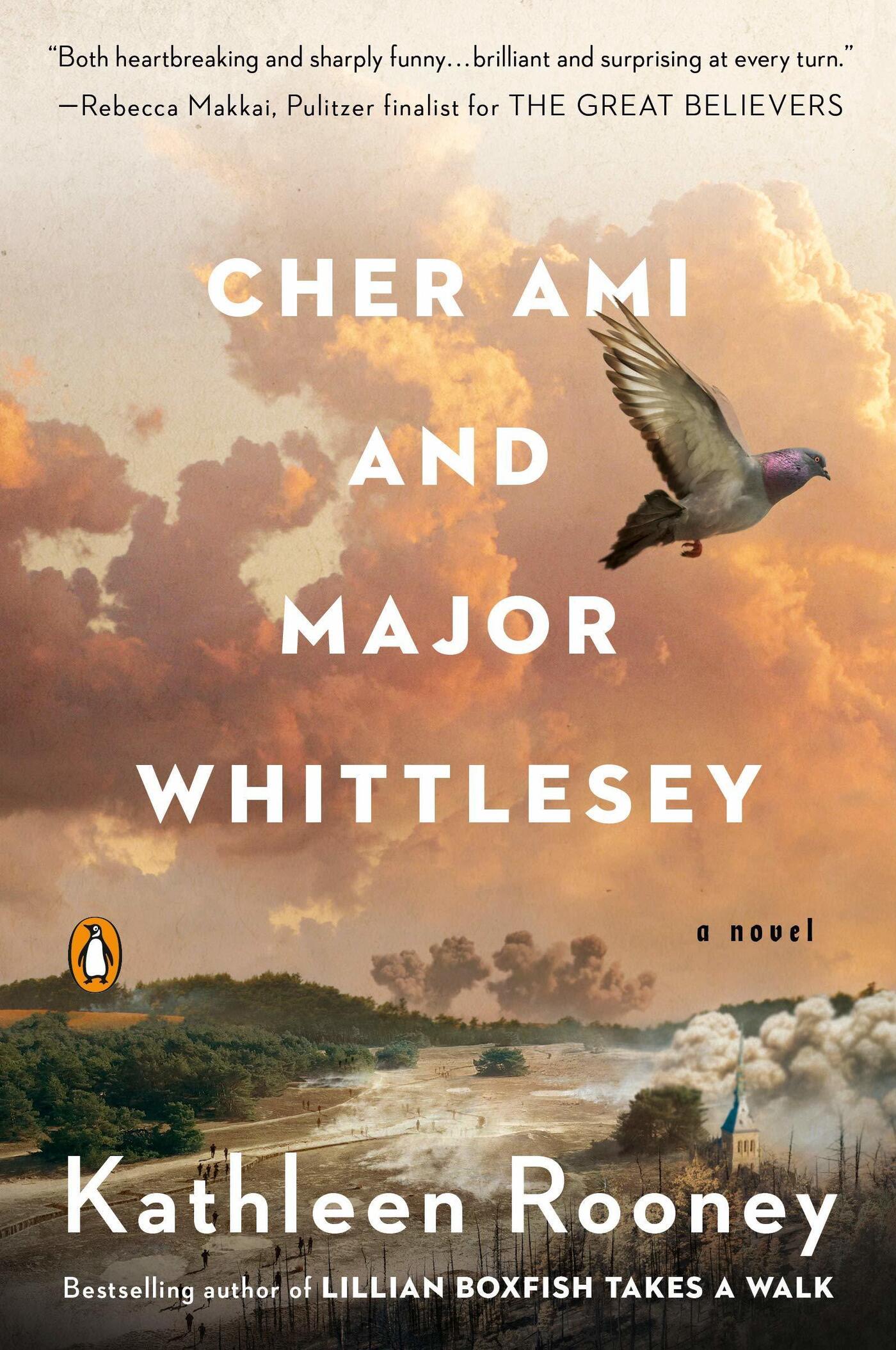 In London's Hyde Park, there's a heartbreaking series of sculptures called the Animals in War Memorial — heavily laden bronze donkeys struggling through a gap in an enormous curved wall. It honors creatures from elephants to glow worms, who served alongside humans in war; as the memorial says, "they had no choice."

At the head of the animal parade carved on the wall fly three birds — I like to think they're homing pigeons like Cher Ami, the real-life bird who, though terribly wounded by German guns, carried the message that helped save a trapped battalion in World War I.

Cher Ami (who was a hen, despite her masculine name) is the inspiration for Kathleen Rooney's novel Cher Ami and Major Whittlesey, which imagines the parallel lives of both the pigeon and the commander of what became known as the Lost Battalion.

Rooney teaches writing at DePaul university in Chicago; she says a student's poem mentioned Cher Ami in passing, moving her to look up the story.

"The instant that I landed on Cher Ami's Wikipedia page, I could see that she was not merely a remarkable pigeon and World War I hero, but also that she would make an incredibly complex and unique protagonist for a novel," Rooney says. "As a fiction writer, I'm drawn to historical incidents and figures that were stunningly well-known in their day but that have since been forgotten. Both she and Major Charles Whittlesey (a person you are bound to stumble upon, too, if you're researching Cher Ami) fit that bill. I wanted to bring the two of them and their triumphs and tragedies back into the light in the 21st century.

There are quite a lot of parallels between Cher Ami and Major Whittlesey — tell me about how you developed those characters.

On Veterans Day, We Pause To Read 'In Flanders Fields,' Written in 1915

100 Years On, The 'Hello Girls' Are Recognized For World War I Heroics

Falling down that initial Wikipedia rabbit hole — well before I dug into my more deep and serious research — the resonances between these two unlikely heroes of the Lost Battalion were undeniable. For starters, Cher Ami had been misgendered all her life as a male bird and it was only after they taxidermied her body to install her in the Smithsonian that they discovered her to be a female pigeon. And Whittlesey — arguably the most celebrated hero of WWI aside from Alvin York — seemed, based on my investigations (and those of other contemporary researchers) to have been a gay man who had to keep that aspect of his identity to himself, given prevailing prejudices of the 1910s.

As a novelist, those echoes captivated me because not only did those traits make Cher Ami and Whit somewhat unusual for their era, but they also seemed to rhyme with each other in a way that revealed a lot about America's ideas of heroism and who could or could not be a hero. Like all wars, WWI was an incredibly masculine and patriarchal conflict, so to have these two crucial figures who decidedly did not fit in with that prefabricated, stereotypical notion of heterosexual male violence and bravery seemed like something that deserved a closer look.

I loved the pigeon culture you invented — it made me think a little bit of Watership Down. How did you build that world? (And was Watership Down an influence?)

Watership Down was definitely an influence because it's a book that often gets pigeonholed (pun intended) as for young readers, but that also has much to show readers of any age. I knew that making one of my two protagonists a pigeon who speaks in the first-person would possibly cause some readers to dismiss the book, but that's okay because I think that all humans everywhere would be in a much better position in terms of sustainability, the environment, and respect for all life if they took animals and other non-human beings more seriously. It seems like a failure of imagination to say animal characters are only for kids. To that end, another big influence in my creation of the voice of Cher Ami was the poet and newspaper columnist Don Marquis. His characters Archy the Cockroach and Mehitabel the Cat are two of my favorites in all of literature for how their animal perspectives allow Marquis to satirize, comment on, and critique the frequently bewildering and dispiriting world of human beings, but to do so in a witty and entertaining way.

You've also created a viscerally real world in the training camps, in transit and on the front — I could almost smell it. How did you do your research?

I'm a big smell person so I'm thrilled to hear the smells came through. Because I've never been a soldier or a pigeon, I knew that I had to be extremely careful and thorough in my research to create both of those worlds in a way that was respectful, plausible, and realistic. If research and writing can be compared to plotting a route on a really big map, then I started by dropping a pin into my destination, so to speak, of the story of the Lost Battalion, and then zooming as far out from there as I could in order to make myself walk slowly and observantly back in. I read up on the big, panoramic-view causes for and reasons behind WWI and how America eventually came to be involved, but then worked my way methodically closer and closer to the 308th Infantry, 77th Division in which Whit was a commander, and then toward Whit himself and his and Cher Ami's brutal days trapped by the Germans in the Pocket.

Pigeons are much maligned these days and if my book does anything, I hope it helps readers who feel unimpressed by these birds to have another look.

Moreover, I did a ton of research on pigeons and how they are raised and how they learn how to home, and why they were such crucial messengers in times of war all the way through World War II. My favorite element of research, though, was extremely personal in that as I was drafting the novel, a pigeon couple moved in under the eaves of our condo and raised two adorable babies and I got to see all of my pigeon research — about how they nest, how they parent, how they learn to fly and on and on — play out right in front of my eyes. It was beautiful.

Pigeons are much maligned these days and if my book does anything, I hope it helps readers who feel unimpressed by these birds to have another look.

World War I was so long ago — it's finally passed out of living memory. What does that conflict have to tell us today?

I kept thinking about that as I was writing — how unlike more recent conflicts, not a single person is still alive who directly experienced World War I. Twenty million humans — including roughly 10 million soldiers and 10 million civilians — and countless animals — including pigeons, dogs, horses, mules, donkeys and more — died in that four-year bloodbath. And for what? At best, WWI shows up as the answer to a question on a high school history exam now and again. That futility becomes less futile if maybe readers are able to look at this conflict and see that everything is a choice, a choice we can make or not make, but only if we act collectively. The leaders of the various empires of the globe pushed their citizenry toward convulsive violence and mass destruction, just as now, empires that promote power above all other ends and a capitalist system that prioritizes profit over people and all other forms of life pushes our planet to the breaking point.

It's hard to stop the momentum of things like war, like global warming, like human assumption of superiority over animals, or like hierarchies of dominance of all kinds. But I think we could. It would take a lot of people acting together, but we could. Fiction, I hope, is a place where our imaginations can go to figure out what kinds of decisions and alternatives might be possible.

See Cher Ami at the Smithsonian