Accessibility links
The Dalai Lama Offers A Take On Climate Change: 'Promote Vegetarianism' The exiled Tibetan spiritual leader has co-written a book about climate change called Our Only Home. In an NPR interview, he suggests one step toward combating climate change is to stop eating meat. 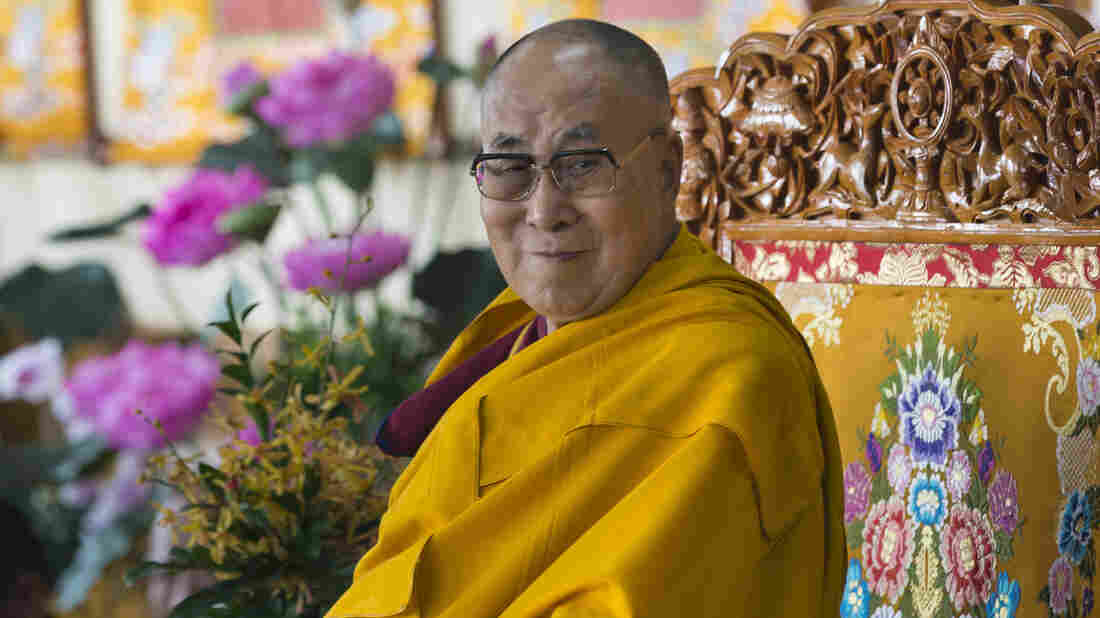 The Dalai Lama, Tibet's spiritual leader, sits on his ceremonial chair as he presides over the inauguration of the Namgyal Monastery School in Dharamshala, India, on Nov. 2, 2017. Ashwini Bhatia/AP hide caption 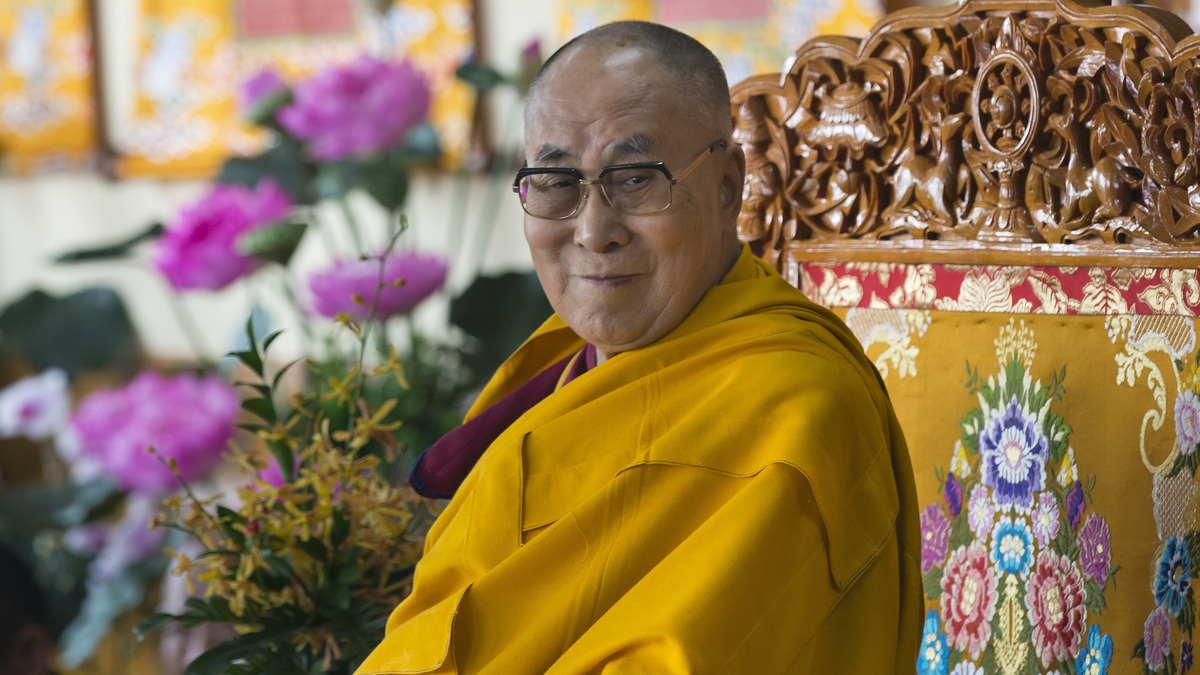 The Dalai Lama, Tibet's spiritual leader, sits on his ceremonial chair as he presides over the inauguration of the Namgyal Monastery School in Dharamshala, India, on Nov. 2, 2017.

The Dalai Lama, Tibet's spiritual leader, is 85, and he wants to warn us of something: We must take care of our planet.

"It's logical," he tells NPR's Morning Edition on a video call from his home in Dharamshala, India. 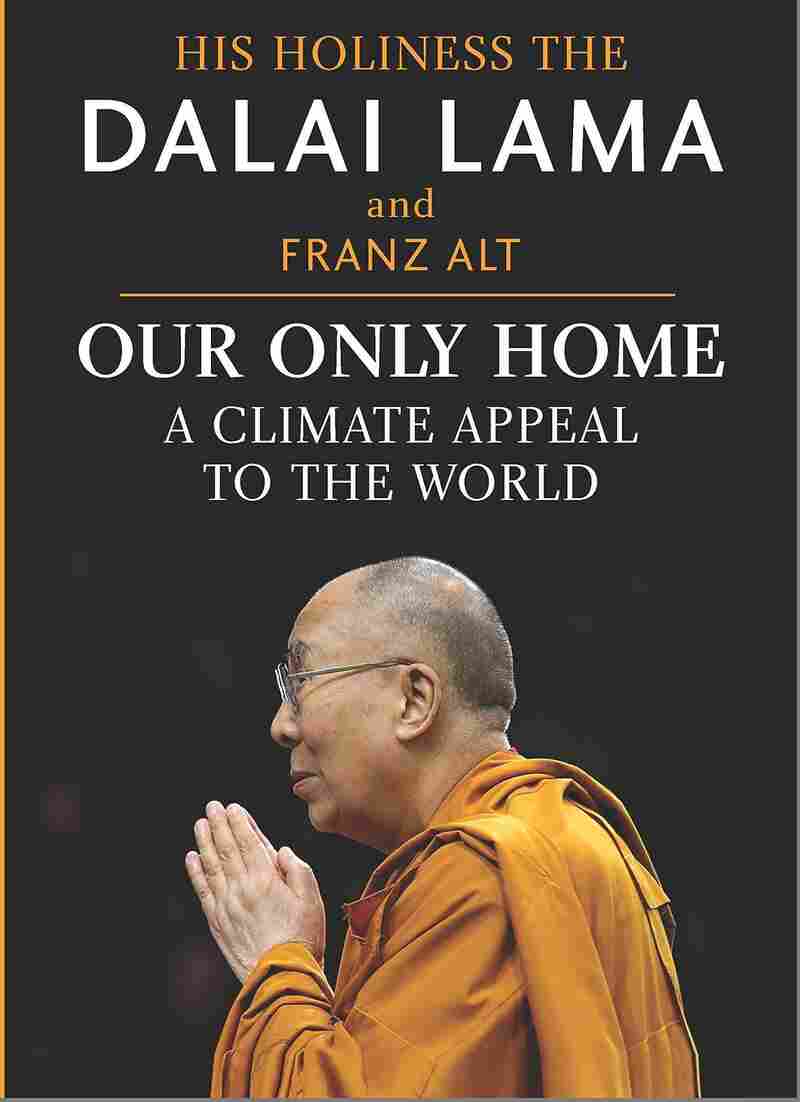 Our Only Home: A Climate Appeal to the World, by the Dalai Lama and Franz Alt Hanover Square Press hide caption

He just co-authored Our Only Home, a book about climate change. In Buddhism, trees are sacred; they sheltered Buddha during his birth, his enlightenment and his death. In the Himalayas, against whose backdrop the Dalai Lama lives, glaciers are melting. Billions of people in China and India depend on them for water.

One step toward helping to combat climate change, he says, is to stop eating meat. Cattle produce methane, a greenhouse gas and contributor to global warming. It also takes a lot of land to grow food to feed livestock, making meat production a leading cause of deforestation.

"Not only is it a question of a sense of love [of these animals] but itself, you see, very bad for ecology," he says. "The beef farm, I really feel very uncomfortable. Large number of animal only for food. We should promote vegetarianism as much as we can."

He doesn't see the world in terms of countries, and he wishes we wouldn't. Our Mother Earth, he says, is teaching us a lesson in universal responsibility.

On 50th Anniversary Of Earth Day, What You Can Do For The Environment

Three years ago, when the Trump administration withdrew from the Paris climate agreement, the Dalai Lama was stunned.

"I think that's a mistake," he said. "Right from the beginning, when the president of America ... mentioned 'America First,' I feel disagreement. America, the leading nation of free world, so America should think not just America first," he says. "America have great potential making contribution for happier world."

Who Will Decide On The Dalai Lama's Successor — His Supporters Or Beijing?

Some of this may seem so urgent to him because he's not young anymore. It's on his mind. In Buddhist tradition, he would pick the next dalai lama, then reincarnate into that body. But China would also like to pick the leader. China, of course, occupies Tibet. He wonders whether a dalai lama is necessary.

"At the time of my death, the Tibetan Buddhist leaders should have a serious discussion whether dalai lama institution should continue or not. If continue, then, in Tibetan tradition, the seniority, you see — some leader, not by reincarnation, but the elder one, good scholar, good practitioner become the head," he says. "So that's not my business. My business: I have to take care [of] myself."

Taylor Haney and Reena Advani produced and edited the audio story. Heidi Glenn adapted it for the Web.