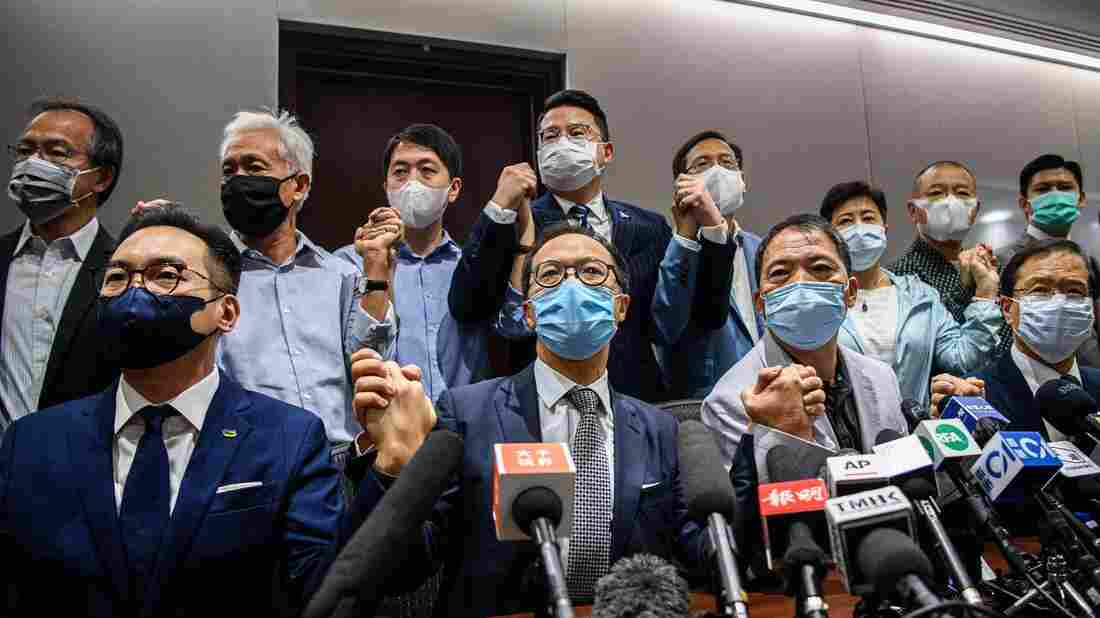 Pro-democracy lawmakers at the start of a news conference in a Legislative Council office in Hong Kong on Wednesday. The legislators are resigning en masse over a new law from Beijing that led to the ouster of four of their fellow lawmakers. Anthony Wallace/AFP via Getty Images hide caption 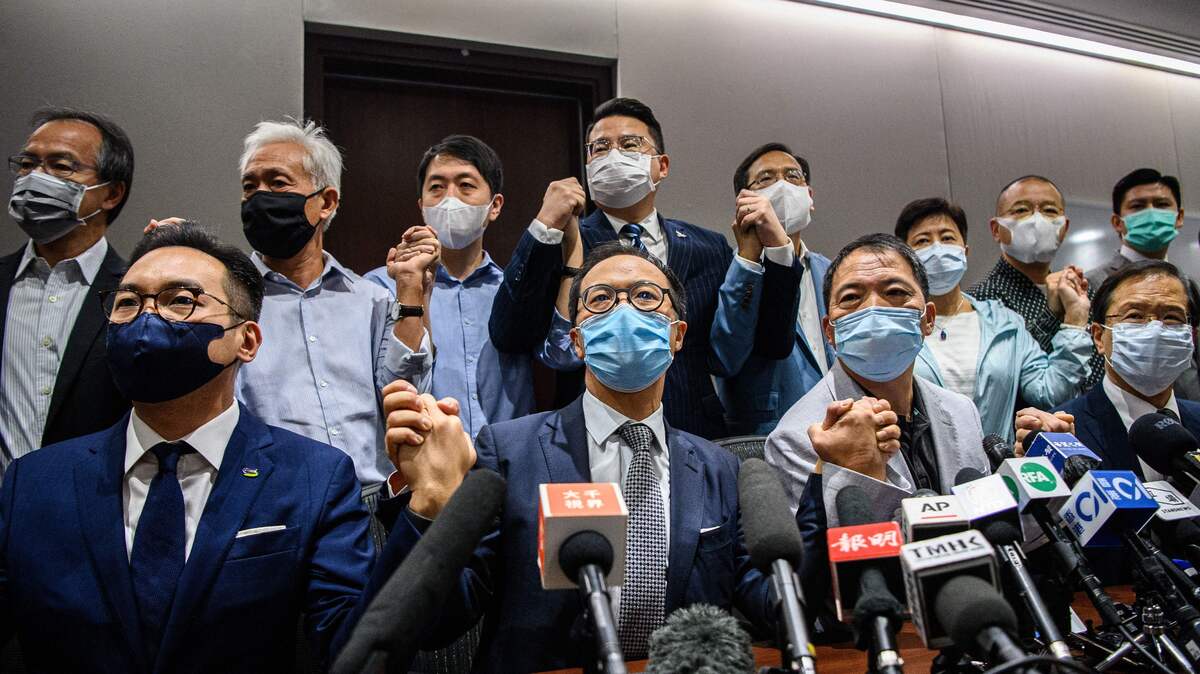 Pro-democracy lawmakers at the start of a news conference in a Legislative Council office in Hong Kong on Wednesday. The legislators are resigning en masse over a new law from Beijing that led to the ouster of four of their fellow lawmakers.

The move comes after China's National People's Congress Standing Committee passed a resolution giving Hong Kong authorities the power to bypass local courts and summarily remove politicians seen as a threat to security. Four Hong Kong lawmakers who have supported the territory's pro-democracy movement — and were thus barred from running for reelection — were immediately unseated, as stipulated in the resolution.

"Today, we announce we will resign from our positions as our colleagues are being disqualified by the central government's ruthless move," Democratic Party chairman Wu Chi-wai said at a news conference.

In all, 15 remaining opposition lawmakers said they would step down in solidarity with their ousted colleagues — Alvin Yeung, Dennis Kwok, Kwok Ka-ki and Kenneth Leung. The four were removed from Hong Kong's Legislative Council, or Legco, for "endangering national security."

During the news conference, Wu characterized the walkout by the legislators as a "fight of democracy."

Kwok, a member of the pro-democracy Civic Party who was among those disqualified from the legislature, told reporters: "If observing due process, protecting systems and functions, fighting for democracy and human rights would lead to the consequences of being disqualified, it would be my honor."

Major protests last year were sparked by a proposed extradition bill that would have allowed some people accused of crimes in Hong Kong to be transferred to mainland China to face courts there. The Hong Kong government eventually withdrew the bill, but Beijing later passed a sweeping national security law aimed at the territory that includes harsh penalties for anyone found guilty of supporting secession, subversion of state power, terrorism or collusion with foreign entities.

The new resolution effectively gives Beijing veto power over who sits in Hong Kong's legislature. It follows months-long pro-democracy protests that saw hundreds of thousands of demonstrators pour into the streets of Hong Kong to oppose China's crackdown on freedoms in the semiautonomous territory.

Though long expected, the timing of Beijing's move after the U.S. presidential election seems aimed at testing how far it can go while Washington is distracted by legal fights over the results of the Nov. 3 vote.

When Hong Kong, a former British colony, was returned to China in 1997, the territory was granted various protections and the power of limited self-government. However, Beijing has steadily chipped away at guarantees in Hong Kong's Basic Law meant to enshrine a "one country, two systems" philosophy of governance.

Since the handover from Britain nearly a quarter century ago, pro-democracy candidates in Legco have been crowded out by indirectly-elected members loyal to Beijing. China has refused to allow Hong Kong to choose its own chief executive.

Samuel Chu, a leader of the Hong Kong Democracy Council, an activist organization based in Washington, D.C., tells NPR that after Beijing passed the national security measure outlawing most dissent, Hong Kong's institutions have been slowly neutered.

"This is sort of the march to the end," he added.