Accessibility links
Shake-Up At Pentagon Puts Trump Loyalists Into Senior Roles The firing of Defense Secretary Mark Esper was the beginning of a series of changes to top-level positions at the Pentagon. 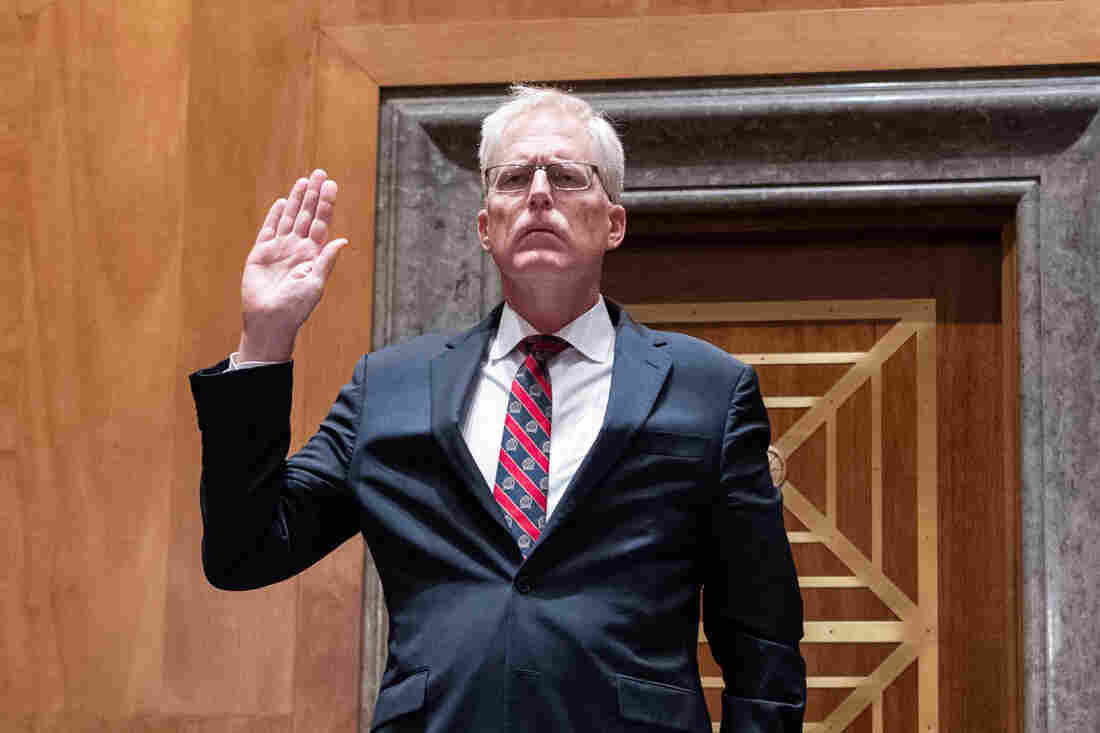 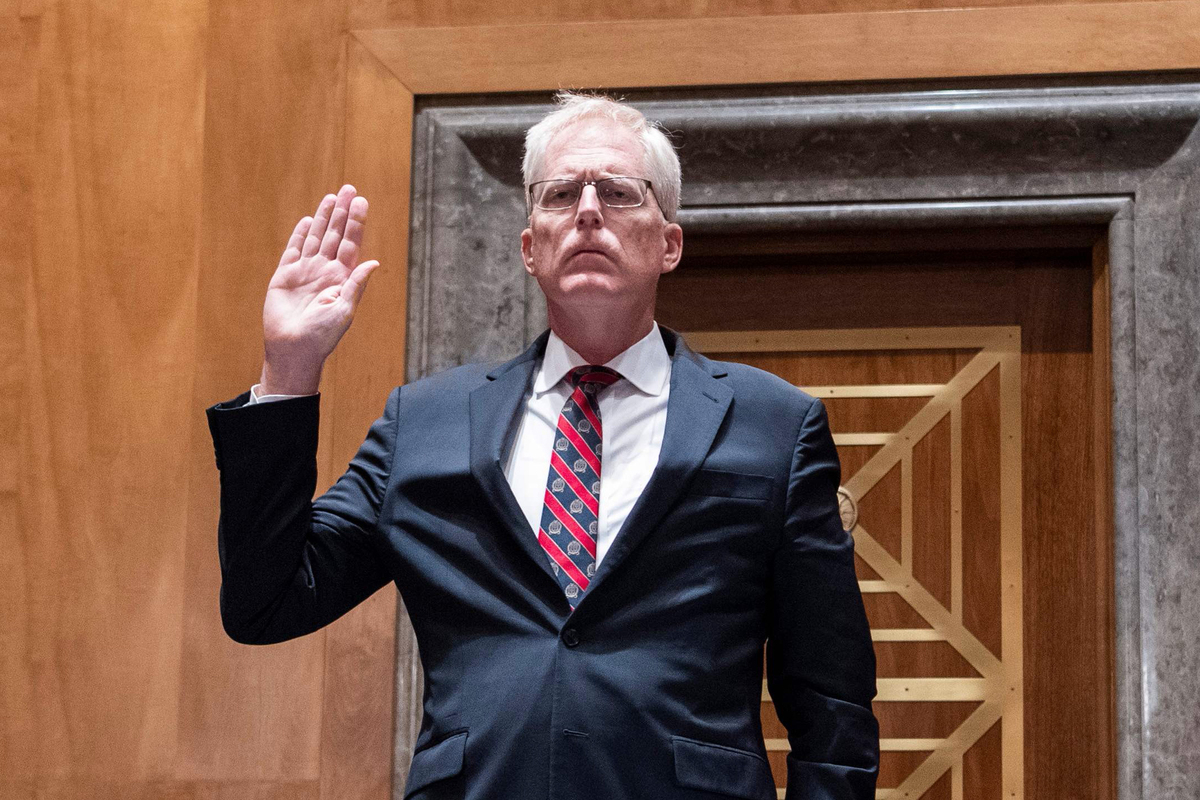 Christopher Miller, seen at a Senate hearing in September, was named acting defense secretary on Monday as part of President Trump's shake-up of the national security community.

The shake-up at the Pentagon continues after President Trump "terminated" Defense Secretary Mark Esper, replacing him with his counterterrorism chief, Christopher Miller, who was being briefed on issues and operations.

Three other top Pentagon officials have been replaced with Trump loyalists who have pushed conspiracy theories or who are hawkish on Iran. There are concerns such personnel changes could mean a more aggressive stance toward Iran before the president leaves office in the next 2 1/2 months.

And such loyalists are expected to push for removing more or all troops from Afghanistan, Syria and Iraq, following through on Trump's campaign pledge to get the U.S. out of "endless wars."

One Pentagon official, who asked not to be named, said the abrupt changes are making those in top jobs nervous.

"I would say the civilian senior leaders are very worried, but they don't know who's next or what's happening," the official said. "You can't even mention transition at the Pentagon."

Rep. Adam Smith, a Democrat who is chairman of the House Armed Services Committee, condemned the changes.

"It is hard to overstate just how dangerous high-level turnover at the Department of Defense is during a period of presidential transition," he said in a statement. "The top policy professional in the department resigning the day after the secretary of defense was fired could mark the beginning of a process of gutting the DoD."

Esper himself has raised the issue of Trump loyalists changing policy. In an interview with Military Times after the Nov. 3 election, referring to his expected firing, Esper said: "Who's going to come in behind me? It's going to be a real 'yes' man. And then God help us."

Trump wanted to fire Esper back in June when the defense secretary disagreed with the president over sending active-duty troops to help quell street protests in Washington, D.C., and across the country. Esper said that job should be left to the National Guard. But Trump was talked out of firing Esper by aides and lawmakers who worried that such a move would not look good so close to the election.

More recently, Esper was viewed by the White House as stalling on the president's efforts to remove troops from Afghanistan. That was still another reason for changes at the Pentagon. Military leaders have supported the withdrawal of some forces, down to 4,500 by the end of the month. But they want to maintain that presence going into next spring, a move that would continue to put pressure on the Taliban to abide by the conditions of its peace accord with the U.S. and also continue to battle al-Qaida and ISIS forces.

At the same time, the chairman of the Joint Chiefs, Army Gen. Mark Milley, has clashed with Trump's national security adviser, Robert O'Brien, who announced there would be sharp reductions in U.S. troop levels in Afghanistan by January, leaving about 2,500 troops there.

Milley, in an interview last month with NPR, dismissed such talk as "speculation." Together with Esper, Milley has opposed using active-duty troops to quell domestic unrest, something Trump suggested be done this past summer.

Even if policy changes are attempted, those civilian officials would still have to deal with top military leaders who could oppose or stall any abrupt policy moves. But with Trump loyalists in place that might be difficult.

The three top positions that changed hands are chief of staff, undersecretary for policy and undersecretary of defense for intelligence and security.

Kash Patel, currently serving at the White House on the National Security Council, will take the chief of staff job. Patel worked as a staffer for Republican Rep. Devin Nunes and was reportedly involved in pushing the narrative that the Obama administration spied on the Trump campaign in 2016. In addition, he also made the case that the FBI and Justice Department acted improperly when investigating Trump. Multiple inquiries have failed to produce evidence supporting these claims.

Ezra Cohen-Watnick will be the Pentagon's new undersecretary for intelligence and security. Cohen-Watnick has reportedly favored using the U.S. intelligence community to undermine or oust Iran's government. When he was at the National Security Council, he clashed with then-national security adviser H.R. McMaster and was forced out.

Press reports said Cohen-Watnick invited Devin Nunes to the White House to review material that suggested the intelligence community was surveilling the Trump campaign in 2016. Those claims were never proven.

Meanwhile, Anthony Tata, who will take over the top policy job, has long pushed for removing troops from Afghanistan and Syria. Tata, a retired Army brigadier general, was nominated for the job over the summer, but that ended because of his Islamophobic tweets as well as some more bizarre statements, including calling former President Barack Obama a "terrorist leader."

Another possible addition is Douglas Macgregor, another advocate for pulling troops out of Afghanistan and Syria. There are reports that Macgregor, a retired Army colonel, will work as an aide to acting Defense Secretary Miller.