Accessibility links
Census: Trump Still Controls Count Before Biden Becomes President The legal fight continues over whether President Trump can alter numbers that set up the next Electoral College map, and there's a question of whether Congress will give more time for quality checks. 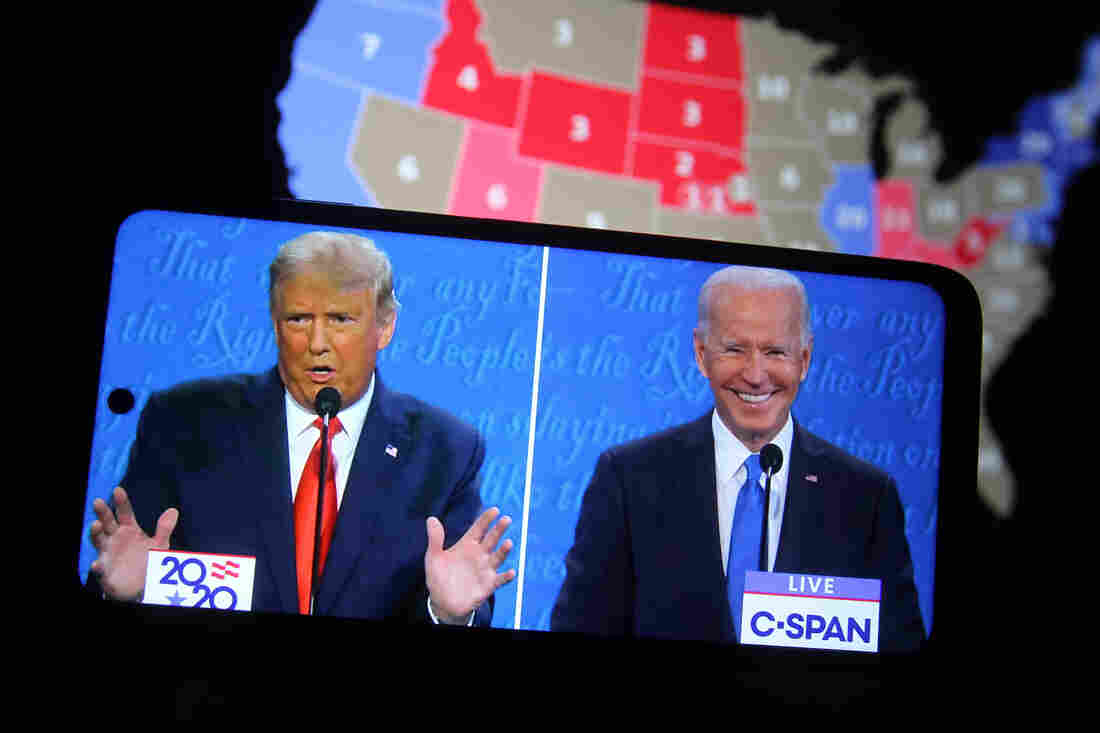 Some major final steps for the 2020 census are set to take place during the transition from President Trump to President-elect Joe Biden, who both appear above on a smartphone displaying the final presidential debate in October. Photo illustration by Pavlo Conchar/SOPA Images/LightRocket via Getty Images hide caption 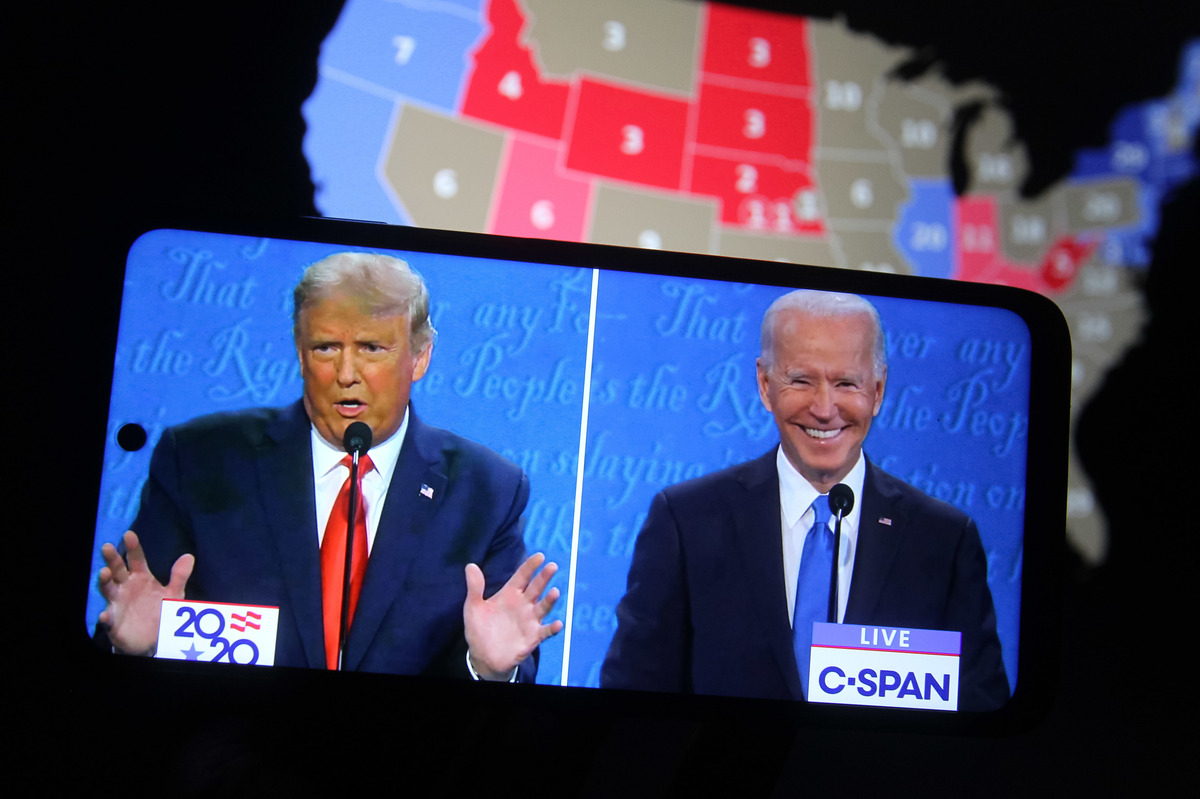 Some major final steps for the 2020 census are set to take place during the transition from President Trump to President-elect Joe Biden, who both appear above on a smartphone displaying the final presidential debate in October.

Counting has ended, but the 2020 census is not over yet — and it's likely to get tangled in the fraught transition to President-elect Joe Biden's administration.

Some major final steps for this year's national head count are set to take place while President Trump is still in office. That includes the release of the first set of results, legally due by Dec. 31, that are used to reapportion congressional seats among states and reset the Electoral College map for the next decade. Under federal law, the president is required by Jan. 10 to hand off those numbers to Congress for certification.

And the census continues to be mired in legal fights over the Trump administration's push to alter the apportionment numbers, as well as last-minute decisions to shorten the schedule for the constitutionally mandated count of every person living in the United States. A federal judge in California, plus Census Bureau employees themselves, said those changes risked serious data inaccuracies.

"It's probably no secret that the census is not top of mind for every administration on an ongoing basis," says Terri Ann Lowenthal, a former staff director of the House Oversight subcommittee for the census who advised the Obama-Biden transition team in 2008. "But this time is really different because this census faced unprecedented challenges and then disruptions."

In a statement to NPR before the election, Jamal Brown, the Biden campaign's national press secretary, said that Biden "knows the critical importance of the census and how it touches every aspect of American life, from federal investments around health care, housing, and education, to how states redistrict and draw their congressional boundaries."

Among the members of Biden's transition agency review team for the Commerce Department, which oversees the Census Bureau, are two census watchers who have been calling for more transparency as the bureau prepares to release the 2020 census results. They include Nancy Potok — who, during the Obama administration, served as a deputy director at the bureau and was later appointed to be the chief statistician within the White House Office of Management and Budget — and Denice Ross, a senior fellow with the National Conference on Citizenship who worked on data projects and policy in the Obama administration as a presidential innovation fellow and an adviser at OMB.

But before Biden officials can make any changes, there are some key questions about the census for the courts and Congress to answer in the final weeks of the Trump administration.

Can Trump change who is counted in numbers that determine House seats and the next Electoral College map?

The Supreme Court is expected to weigh in with its answer to that question after hearing oral arguments on Nov. 30.

So far, three lower courts have rejected the presidential memo Trump issued in July that calls for an unprecedented change — the exclusion of unauthorized immigrants from the census numbers used for determining each state's share of the 435 seats in the House of Representatives, as well as each state's Electoral College votes.

All of those three-judge panels unanimously found that carrying out the memo would violate a federal law requiring the president to deliver a report to Congress of "the whole number of persons in each State" as determined by the census. One of those panels also ruled that it would go against the 14th Amendment.

The Trump administration has been pushing the high court to rule before Dec. 31. That's the legal deadline for the commerce secretary, who oversees the bureau, to give the president the first set of census results, which Trump wants to alter.

But it remains unclear, given all of the schedule changes the Trump administration has made, whether the Census Bureau can meet the Dec. 31 deadline and how that would affect the president's ability to report numbers to Congress by Jan. 10. Any delays that push key steps in the congressional reapportionment process past the Jan. 20 inauguration could strip Trump of control over the count.

Last month, the bureau's top career official in charge of the census, Al Fontenot, said the agency hasn't committed to when it will wrap up processing and checking all of the information it has collected.

"We are trying to maintain the flexibility to get the job done in a quality way," Fontenot said during a news briefing.

Justice Department attorneys say the administration hasn't finalized how to accurately count unauthorized immigrants, aside from those in Immigration and Customs Enforcement detention centers, in order to exclude them from the apportionment numbers.

In July, Biden condemned Trump's memo in a tweet, writing: "We won't let him deny communities the funding and representation they deserve. Because in America, everyone counts."

But Brown, the Biden campaign spokesperson, has not responded to NPR's question about what the Biden administration would do if, before leaving office, Trump attempted to remove unauthorized immigrants from the apportionment numbers before giving them to Congress.

If Trump did that, it is also unclear whether the clerk of the House, which will remain under Democratic control, would certify those numbers.

That question has been hanging over the census since April, when the Trump administration first proposed four-month extensions to the legal deadlines for reporting the apportionment counts and redistricting data, which are due to the states by March 31.

Publicly backed at the time by Trump and Commerce Secretary Wilbur Ross, who oversees the Census Bureau, career officials at the bureau said that because of delays caused by the coronavirus pandemic, they needed more time to tally the country's residents and run quality checks on the results.

But the administration made an about-face in July and began pushing to end counting early, sticking with the original reporting schedule. The Supreme Court ultimately allowed the administration to cut counting short, leaving open the possibility for Trump to control the apportionment numbers even without winning reelection.

Faced with a shortened window for counting in their states, some Republican lawmakers in Congress began publicly supporting the Democratic-led push for deadline extensions.

But now that counting has stopped, it's unclear if there's enough bipartisan support for deadline extensions to be passed.

The bureau has already scaled back some quality checks, risking "serious errors," career officials warned, that they may not have time to fix.

Some census advocates — including Vanita Gupta, president and CEO of the Leadership Conference on Civil and Human Rights — are calling for Congress to pass deadline extensions during the lame-duck session to help ensure that the bureau has enough time to address any major errors it finds in the census results before they're used to reapportion House seats.