Accessibility links
How Couples Are Struggling Through The Pandemic Couples are struggling to redefine their own roles as they look to navigate a pandemic that has upended many aspects of domestic life. 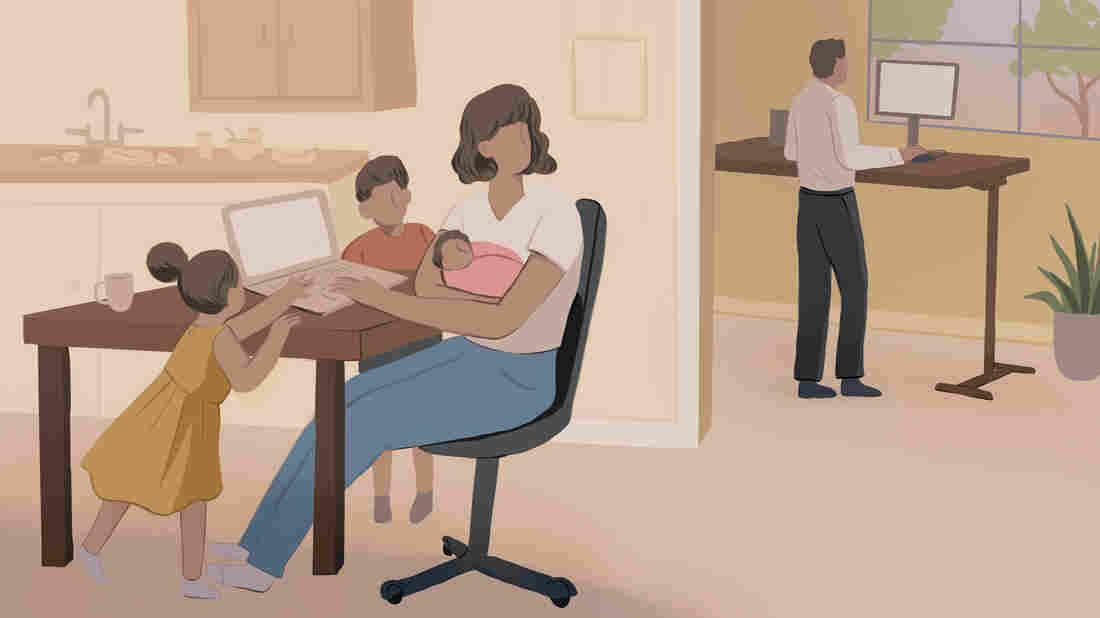 Couples are struggling to redefine their own roles as they look to navigate a pandemic that has upended many aspects of domestic life. Nicole Xu for NPR hide caption 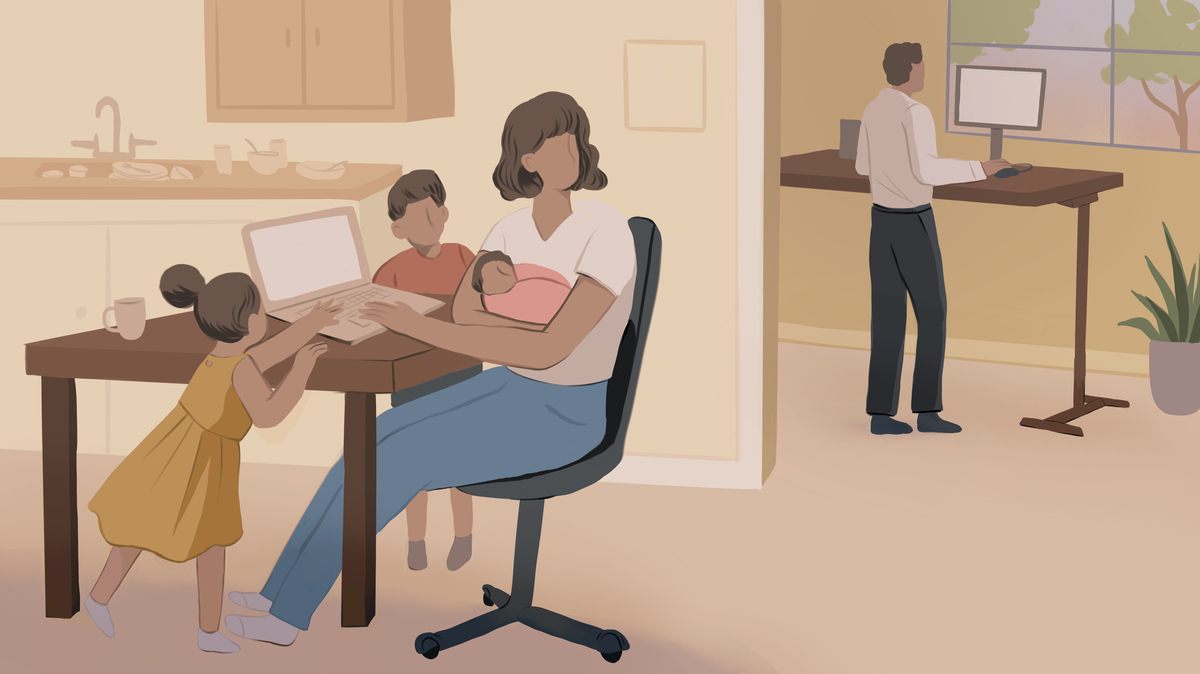 Couples are struggling to redefine their own roles as they look to navigate a pandemic that has upended many aspects of domestic life.

Like many married and working couples first confronting the pandemic, Bianca Flokstra and Victor Udoewa tried to go on with their lives as normal.

Flokstra continued to work full time while taking care of their kids, ages 4 and 2. She also handled most of the housework, with her husband helping from time to time. It didn't work.

"Those first couple of months were really hard," Flokstra says. "There was ... a lot of fighting. A lot of tears."

The pandemic has upended many aspects of domestic life, and that has brought new attention to one of the most enduring disparities between men and women — the wide difference in handling housework and child care.

It's what Marianne Cooper, a sociologist at the Stanford VMware Women's Leadership Innovation Lab, calls one of society's most "stubborn" divides.

Cooper, who has studied the issue extensively, says that divide, which is rooted in history and perpetuated by persistent societal norms, has endured even as women have joined the workforce in larger numbers over the decades, making record gains.

Yet even as more families become dual-income households, women still do 30% more of the housework and 40% more of the child care, Cooper says.

The disparity in work done at home is now having a serious economic impact as entire families are forced home with schools closed and no child care options available.

More than 2.2 million women have left the workforce this year, far more than the 1.4 million men who have left as a result of the pandemic, according to the monthly U.S. Bureau of Labor Statistics data.

Proportionally, more women were employed in sectors that were hit hard by the pandemic, including hospitality and retail.

These Women Built Careers In Retail. The Pandemic Tore Through Their Stores

But Cooper, as well as many economists, says the burden placed on working moms during the pandemic is another key variable forcing many women out of the workforce.

Some couples have adapted.

Flokstra, for example, says she had little choice. She desperately needed sleep after exhausting days at a new job in international aid while also taking care of all of her other responsibilities.

She started sending the kids to her husband, unprompted. Then, she started drafting to-do lists — activities she and her husband would split day to day. 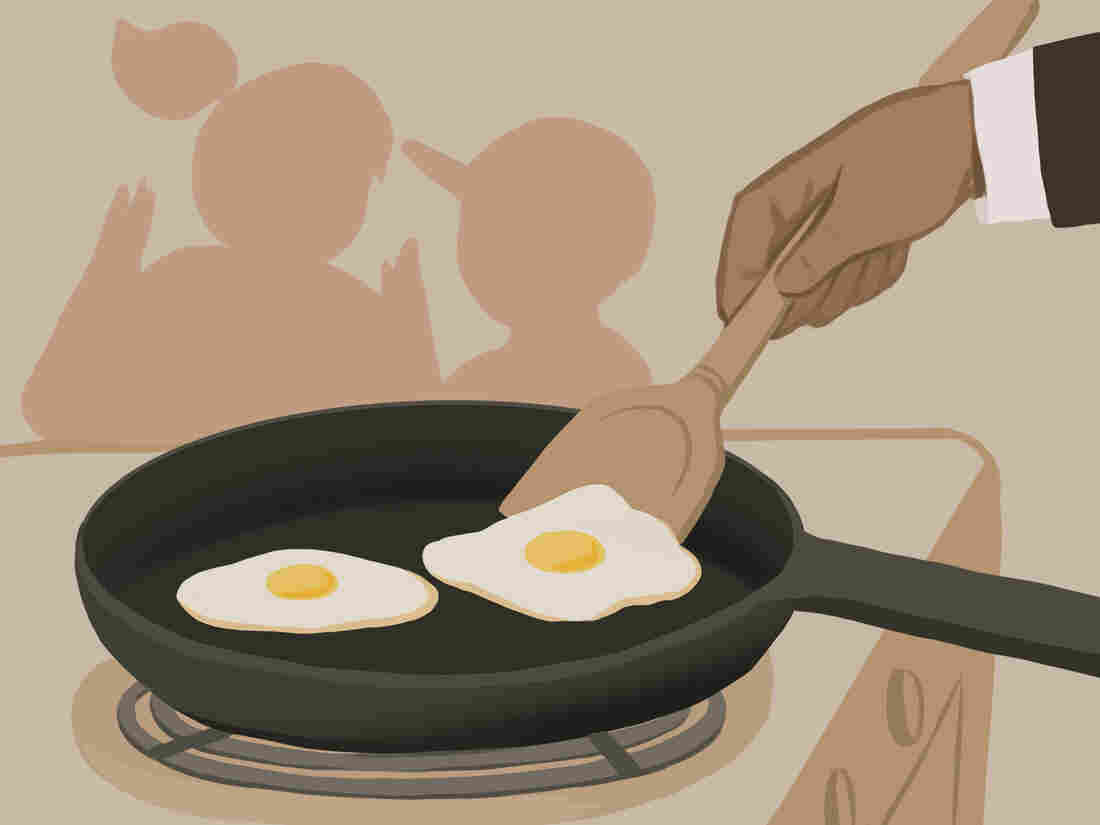 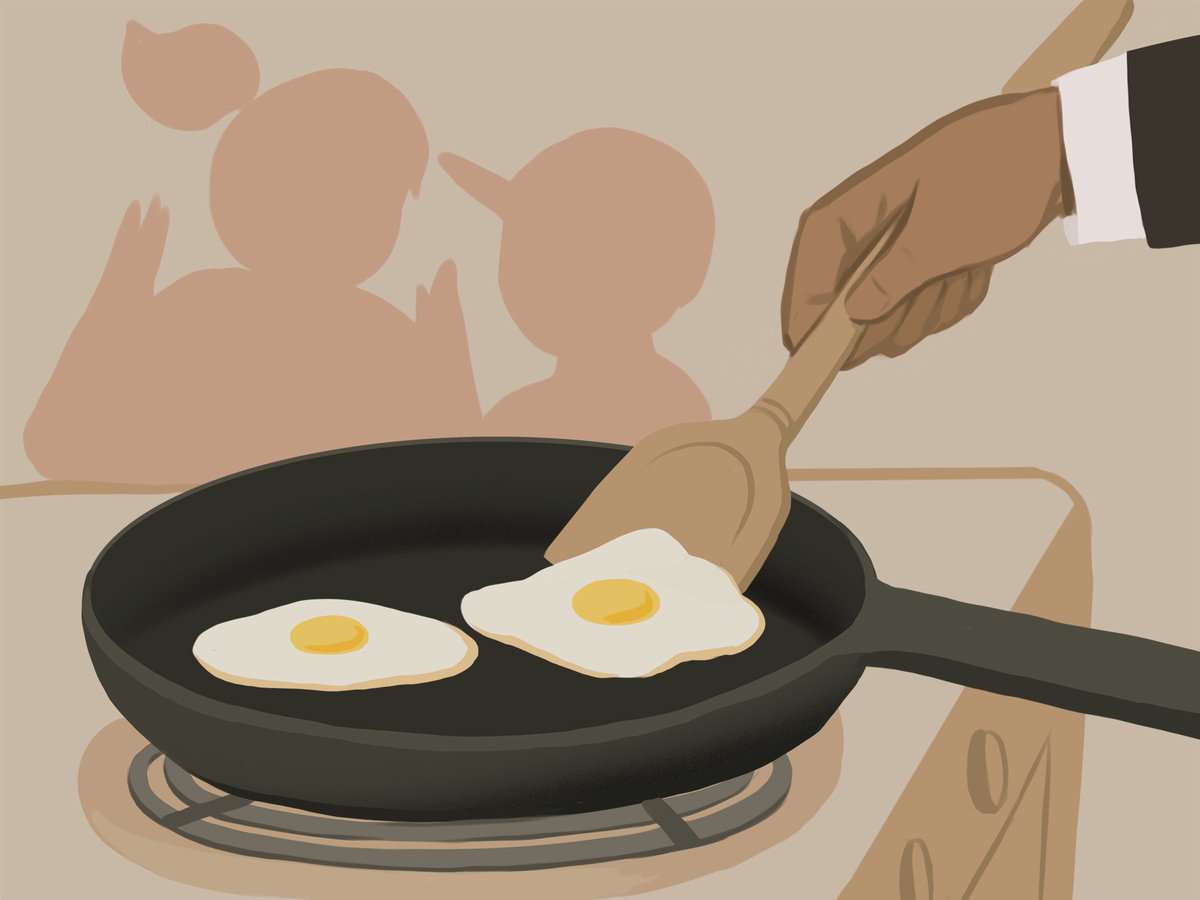 Today, her husband is more involved than ever. Udoewa sweeps floors twice a day, does the dishes and takes care of the kids for half the day, among other things. He cooks dinners as well.

For Dads In The Pandemic: Lows, Highs And Constant Uncertainty

But getting there wasn't easy. It wasn't that Udoewa wasn't willing to help; he was.

Flokstra says she had become so used to doing household chores that she found it hard to delegate — and trust — her own husband to do the job.

That hesitancy is surprisingly common among women, according to Cooper.

It's a complicated mix of "mother's guilt" as well as societal expectations on couples, where men are still seen as the breadwinners.

It's an issue familiar to Flokstra, who says her own mother was a "stay-at-home mom."

Flokstra is now pregnant with their third child. And despite Udoewa's more equitable help, she can't help but feel guilt at times.

"I'm always battling that guilt, that mom guilt of should I be with my children more?" she says.

Nonetheless, she's happy. She credits her husband with stepping up, but she also credits herself.

"That was also me," Flokstra added. "It was me forcing myself to say, 'Hey, I don't have to do everything.' "

Not every couple with children can make it work. And oftentimes it's the mothers who give up the most.

A survey by Moody's Analytics and data intelligence company Morning Consult published last month showed that women are more than twice as likely as their male partners to reduce their working hours because of child care responsibilities. Women are also more likely to quit their jobs or turn down a career opportunity.

"Even after we look at households where the female contributes more to the household income than males, we still see females are reducing their hours more than males," says John Leer, an economist at Morning Consult.

But Raul Carrillo and Laura Uribarri aren't that couple. Both have high-powered jobs and neither can dial back.

He runs a law firm with 13 employees. She is the assistant dean at the University of Texas in El Paso. Their hours are long.

When the pandemic hit and schools shut down, their kids, 11 and 6, were forced to stay home.

Carrillo had to continue to go to work, but he offered to stay at home some days.

Uribarri declined, deciding it would be easier for her to do the bulk of the household chores because she had done it for so long.

"To me, it seemed like more work to help him learn the onboarding piece of it," she says.

'My Family Needs Me': Latinas Drop Out Of Workforce At Alarming Rates

So, Carrillo did step up. He has been picking up some housework. He cooks breakfast for the kids. He takes them out when he gets back home so his wife can have a little time for herself and catch a break. But he constantly feels like he's not doing enough.

"I feel like I come up short every day," he says.

And as Carrillo thinks about the future, he can sense the fragility of his family's situation and wonders how long they can continue in the same manner if the pandemic stretches well into next year.

As for Uribarri, she's trying to make it work as best as she can. She does have a piece of advice for husbands. It's not sweeping the floors or setting up the Zoom calls for the kids.

"I would tell husbands out there — maybe every morning when you get up — ask your wife, is there one thing I could help you with today?" she says. "That's it. Is there one thing that would make your life a little bit better?"