Accessibility links
'She'll Look Like A Boss': Vice President-Elect Kamala Harris Inspires Young Girls In her victory speech, Kamala Harris spoke directly to young girls, saying, "This is a country of possibilities." Girls who met Harris during the campaign say they're inspired by her as a pathbreaker. 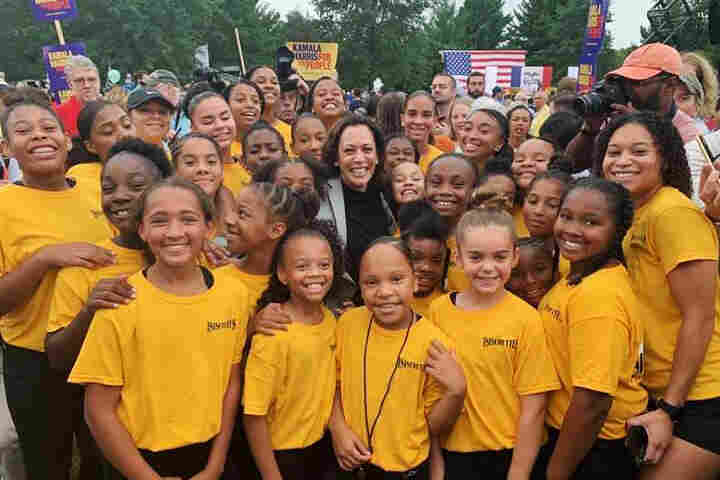 Kamala Harris poses with the Isiserettes, a legendary drill-and-drum team, at the Polk County Steak Fry in Iowa in 2019. Cory Williams hide caption 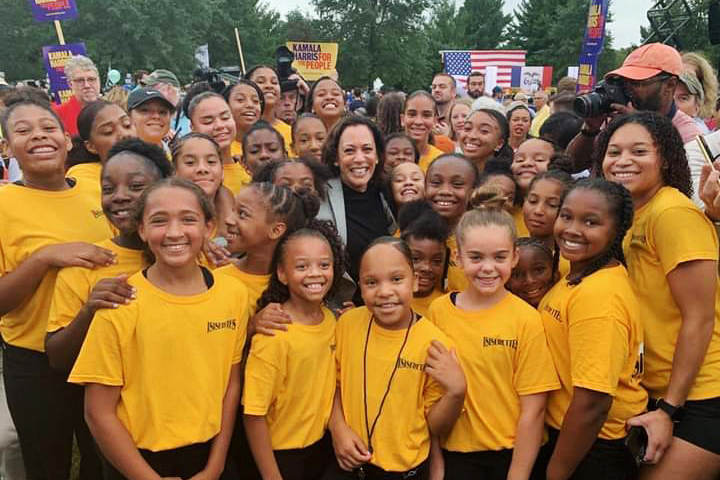 Kamala Harris poses with the Isiserettes, a legendary drill-and-drum team, at the Polk County Steak Fry in Iowa in 2019.

When Vice President-elect Kamala Harris delivered her victory speech on Saturday night, she spoke directly to a certain slice of the population.

"Every little girl watching tonight sees that this is a country of possibilities," Harris said.

Throughout her primary campaign, Harris was known to pay special attention to girls who came to her events, at times offering advice on leadership or encouraging ambition.

If the girls were tiny and shy, she might kneel down and tell them to always hold their chin up.

At one stop, she gently insisted to a newborn girl, "You are going to lead. You are brilliant; you are strong. I know you hear me. You remember that, OK?" 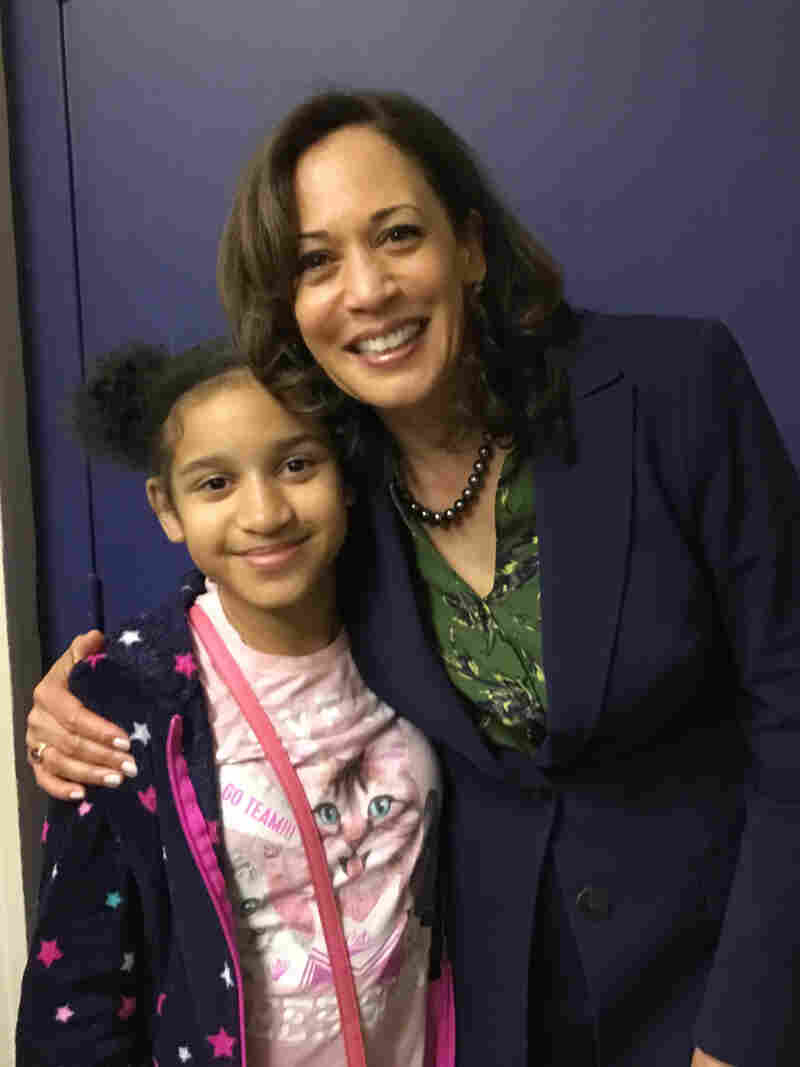 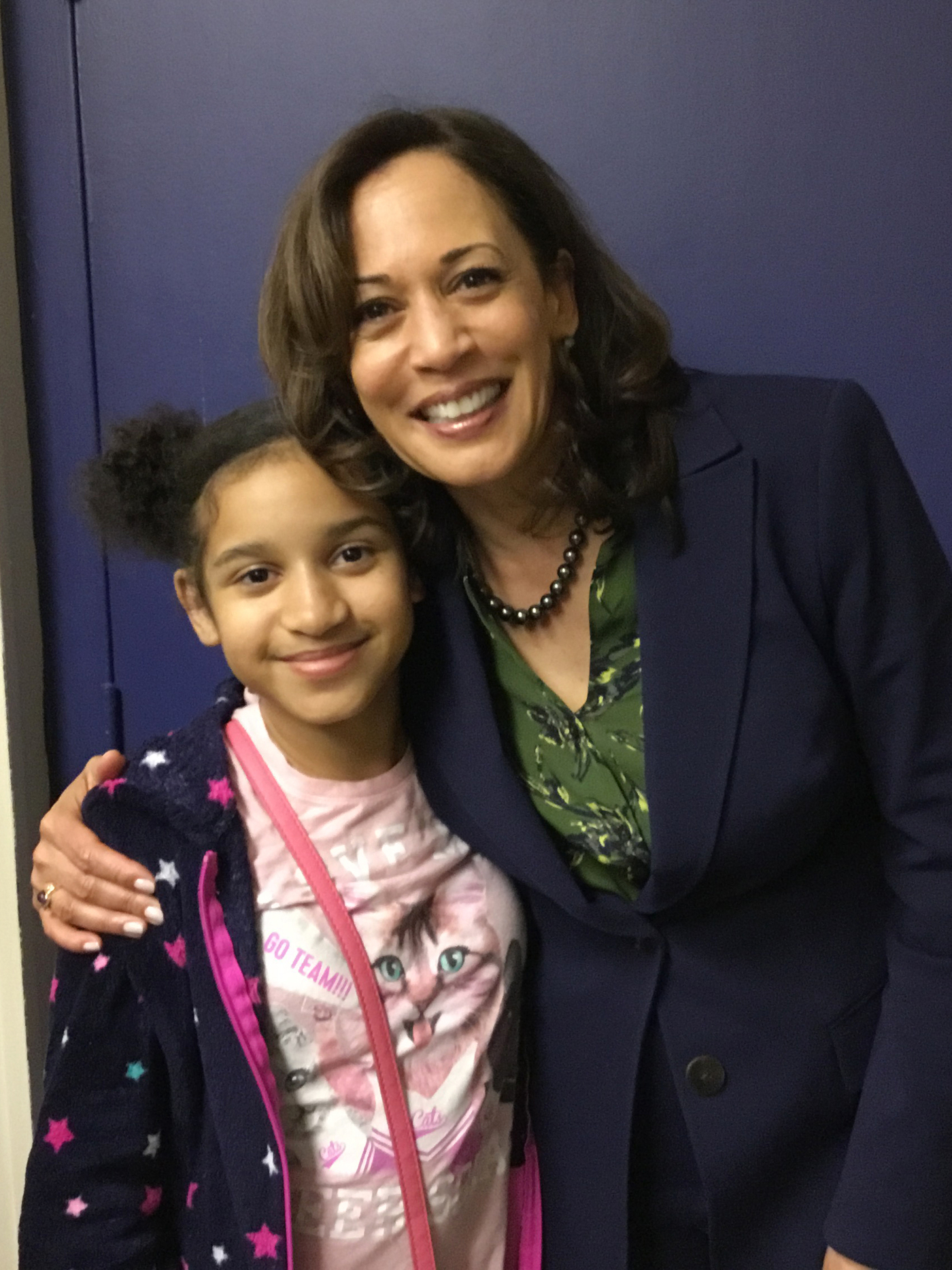 Harris poses with Jasmeen Coronado, then age 9, at a campaign event in Hemingway, S.C., last year.

In March 2019, Jasmeen Coronado stood up amid a sea of grown-ups at a Harris campaign event in Hemingway, S.C., and the then-9-year-old quietly asked the candidate this question: "Is it possible that if I try hard enough in life that I could become president?"

"Absolutely! Absolutely!" Harris responded. "There is no question."

Jasmeen took that message to heart. Hearing it from a biracial woman has special meaning for her, she says, "because I myself am biracial. And the fact that there is a woman like, um, doing this stuff just makes me happy to know that there's people who will stand up for our gender."

Paris Bond was 13 when she met Harris last November in Muscatine, Iowa, shortly before Harris dropped out of the primary race. 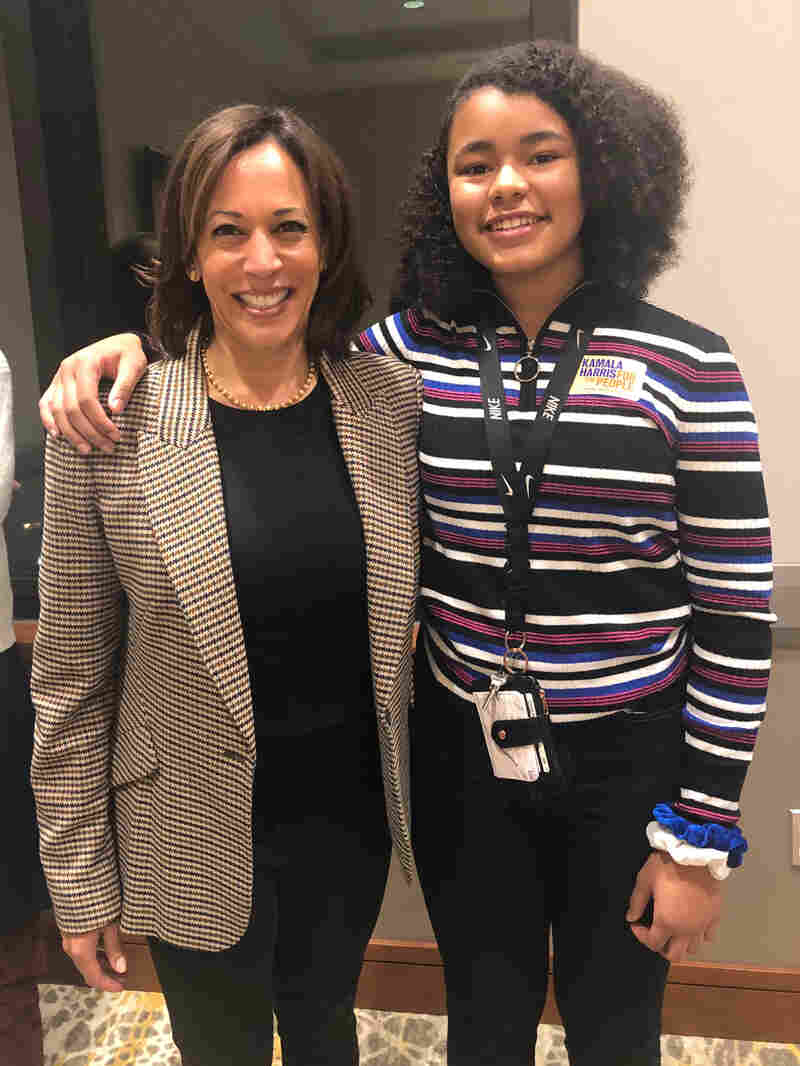 Harris poses with Paris Bond, then 13, at a meeting of supporters in Muscatine, Iowa, last year. Athena Gilbraith hide caption 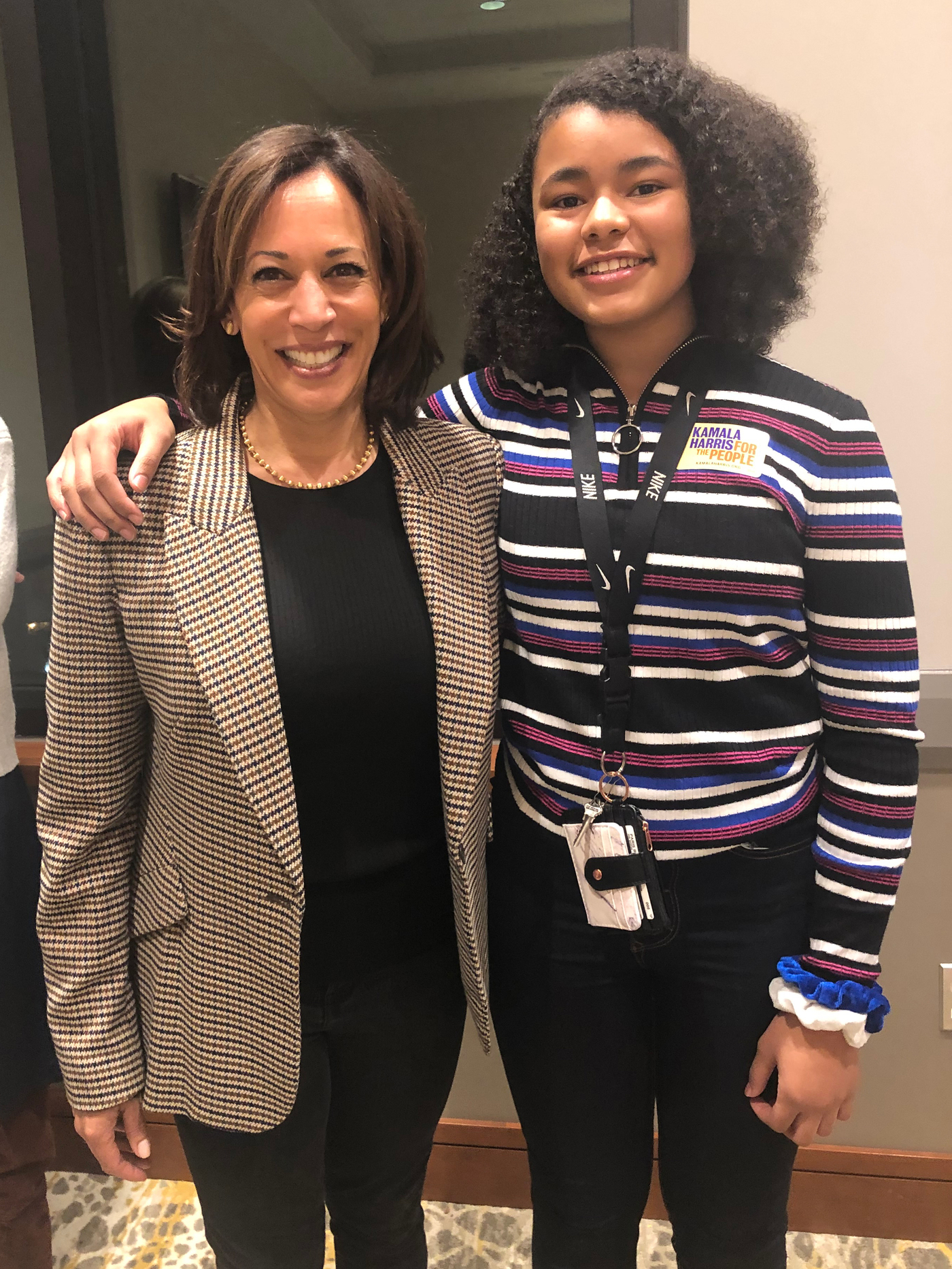 Harris poses with Paris Bond, then 13, at a meeting of supporters in Muscatine, Iowa, last year.

Paris recalls telling the candidate that she had been elected president of her fifth-grade class on the same day in 2016 that Harris was elected to the U.S. Senate.

"I remember her telling me a quote, like, 'You can be the first to do something, but don't be the last,' " Paris says. "So she was telling me to create my path and inspire other people and little girls like she does."

This summer, when then-presidential candidate Joe Biden picked Harris as his running mate, Paris says she and her mother were elated.

"We were just dancing and holding hands and jumping around," Paris says. "It was a really joyful moment."

Now, Paris considers Harris' ascension as vice president-elect "a big breakthrough for young black people, boys and girls, 'cause it shows us that we can do something that we set our mind to."

For Sadie Bell of Putney, Vt., her Harris encounter came during the primary season in April 2019, she was 12.

"I just remember that day being really, really magical," she says.

Sadie went to hear Harris speak in neighboring New Hampshire, and afterward she managed to work her way right up next to the candidate.

"I was small, so I got to squeeze past people," she explains.

When she got close to Harris, Sadie — worried about her upcoming class presentation on climate change — burst out with this: "You're such a good public speaker! How are you so good?"

I never miss a chance to speak with our future leaders, especially young women. One recently asked me how to become a better public speaker. My answer: “Remember, people need to know what you know!”

"Remember that it's not about you," Harris told Sadie, clasping the girl's hands and leaning in close. (This was pre-pandemic, when we could do these things.)

Harris offered this analogy: "If you are on the Titanic," she said, "and you know the ship is about to sink and you're the only one who knows, are you gonna worry about how you look and how you sound? No, 'cause the thing that's most important is that everyone knows what you know."

When it came time to make her climate change presentation in class, she says, the advice helped: "I was thinking about being bold and just really getting the message out there."

As for Harris' trajectory to the second-highest office in the land, "it's a little bit disappointing that it's 2020 and just now we're having a woman become vice president," Sadie says. "But I definitely think it's also uplifting."

And, she adds with a laugh, "I think that she'll look like a boss! Which'll be very cool."

In September 2019, at the Polk County Steak Fry in Des Moines, an Iowa presidential campaign ritual, Harris jumped in and danced with gusto alongside the Isiserettes, a legendary youth drill-and-drum corps.

"She hopped right in line, and she started to groove with us," says Jonna Coleman, 17, who has been dancing with the team since she was 7.

"She did good for her first time!" reports Jonna's friend and Isiserettes teammate Dierra Coleman, also 17. "She was trying to, like, replicate our moves, which was pretty funny to see. She definitely stepped the bar up with what she did, for sure."

Harris may have had girls like Jonna and Dierra in mind when she said this in her victory speech on Saturday night: "Dream with ambition, lead with conviction and see yourselves in a way that others may not, simply because they've never seen it before. But know that we will applaud you every step of the way."

For Dierra, Harris' intention is clear.

"I think by that she just means, you know, step outside of the box. Turn right when they think you're gonna go left. Just always expand your mind to new things, because nobody's gonna expect you to do that because of their image of you."

"And," Dierra says, "you can always, always prove them wrong."