Accessibility links
Cities And States Are Imposing New COVID-19 Restrictions. Experts Say It's Not Enough Areas across the country are implementing preventive measures such as curfews. Some experts are questioning whether these minor changes will be enough to control the virus.

Cities And States Are Imposing New COVID-19 Restrictions. Experts Say It's Not Enough

Cities And States Are Imposing New COVID-19 Restrictions. Experts Say It's Not Enough 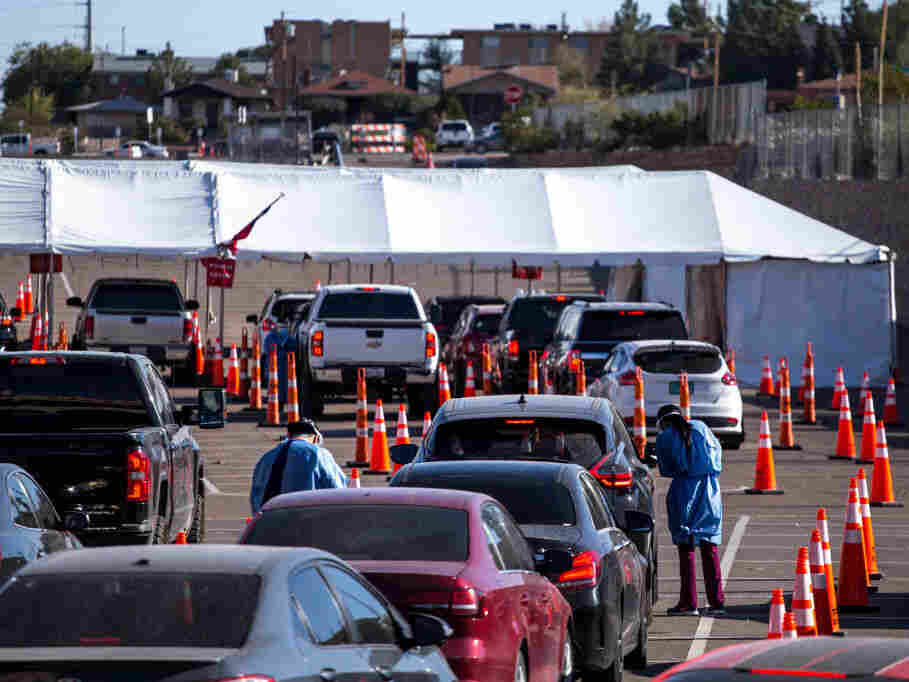 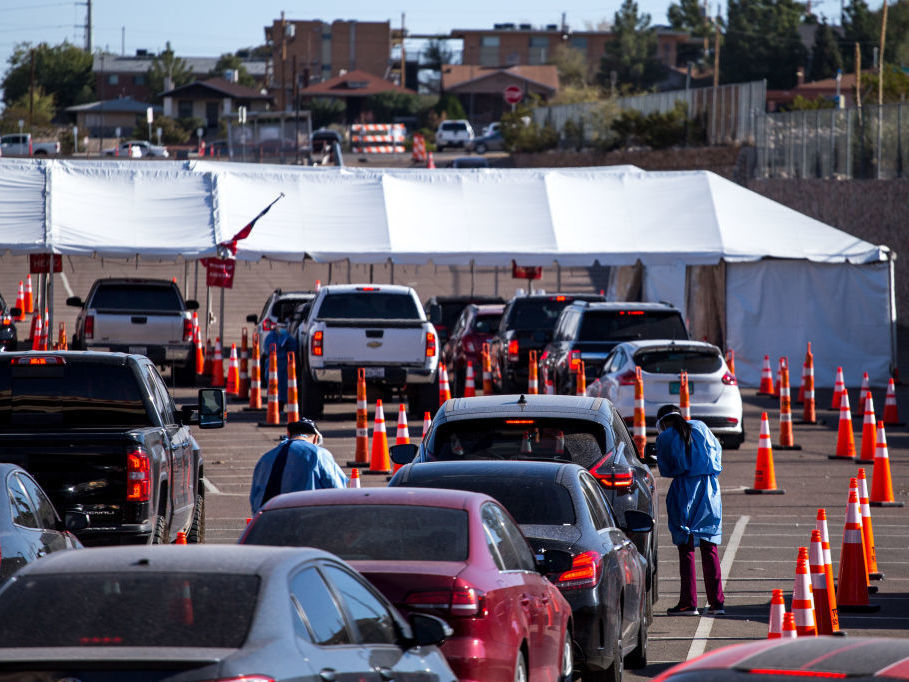 Coronavirus cases are surging across the U.S., prompting many state and local leaders to impose new restrictions. But some experts say these efforts may be too little, too late — like a Band-Aid on a bullet wound.

The virus is spreading unchecked through communities in nearly every state, and new cases topped 150,000 for the first time on Friday, according to Johns Hopkins University. The U.S. is expected to continue breaking records as temperatures drop, bringing people into closer quarters indoors.

"It's a very daunting problem, to control the numbers of cases that we're seeing right now with these kinds of minor efforts," said Andrew Pekosz, a professor of microbiology and immunology at Johns Hopkins University.

The new restrictions have sprung up rapidly in recent weeks. For example, Massachusetts imposed a statewide curfew. Indoor operations for restaurants are not allowed in many counties in California and Connecticut, and part of Montana prohibits indoor dining after 10 p.m., while New York is limiting indoor and outdoor gatherings to 10 people. Chicago is asking residents not to have guests in their homes and cancel Thanksgiving celebrations.

The Denver area is under curfew overnight with few exceptions. Local authorities are trying to avoid imposing a stay-at-home order, even though they have said cases are "substantially above" rates that would merit one.

"The restrictions might seem uncomfortable, but we believe that they are one of our last best hopes to slow the spread of COVID-19 in our community without the necessity of Adams County moving to the Stay at Home orders that we had in the spring," said Dr. John Douglas Jr., executive director of the Denver area's health department. 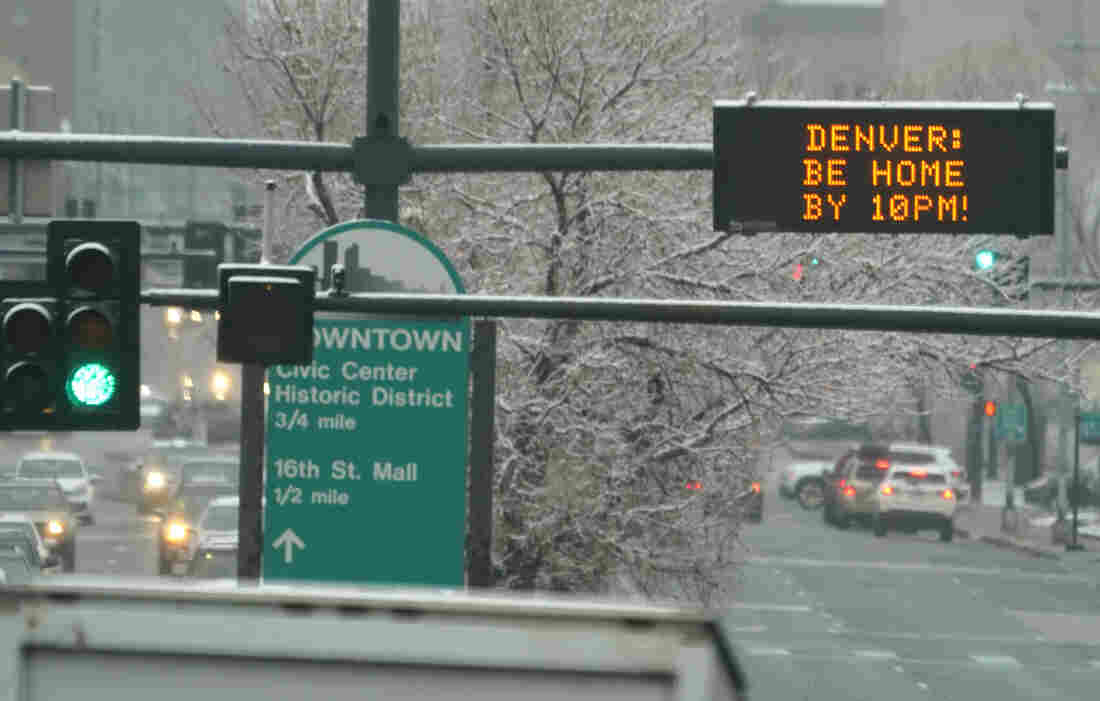 An electronic overhead sign in downtown Denver on Monday reminds residents to follow a curfew put into effect to curb the spread of the coronavirus. David Zalubowski/AP hide caption

Pekosz, who has studied emerging viruses for more than 20 years, said these are steps in the right direction. But he questioned whether these minor changes will be enough to control the virus.

He said there would be two basic strategies that would be effective — and we're seeing neither at this point. Coronavirus restrictions, he said, "either have to be incredibly widespread — everybody has to do it across the country to see this downtick — or we have to go to more strict measures that target the events that we think are driving the spread of cases right now."

Thanksgiving, one of the busiest travel periods of the year, could exacerbate the spread of the virus. The Centers for Disease Control and Prevention is projecting 260,000 to 282,000 deaths in the U.S. by Dec. 5. Experts are also looking with concern to the rest of the upcoming holiday season.

The country is in unfamiliar territory, Pekosz said.

Beth Blauer, executive director and co-founder of the Centers for Civic Impact at Johns Hopkins, is hoping to aid leaders in combating the virus. She has been collecting data and crunching numbers to help cities, states and federal agencies make informed policy decisions.

It's not just the complacency of individuals driving the death toll higher and higher, Blauer said. Unfettered movement between cities and states — and conflicting messages and guidelines from leaders — fueled the rising case counts.

"If there isn't something that's more consistent, either at a regional or national level, you really are not going to realize the kind of gains that you need to see in order to actually stop what's happening right now," she said.

"We are in a full upward swing that requires like a pretty comprehensive approach," Blauer added, saying she doesn't expect that before President-elect Joe Biden is sworn in. "The sad part about it is we're not going to get that at least until January, which means that a lot of people are going to die."

However, neither Blauer nor Pekosz said they believe the U.S. has to revert back to a lockdown status to stop the spread. In fact, they both said society can still turn the tide with limited government intervention. The key is wearing a mask.

"Not only does a mask protect you as the individual, it also protects all the people around you," Blauer said. "It is one of the most essential public health interventions that we have."

With cases still on the rise and the holiday season rapidly approaching, Blauer and Pekosz advise people to get creative with their festivities and do their best to avoid gatherings. It has been a tough year, Blauer said, but this is not the time to lose sight of the big picture.

"There is a light at the end of the tunnel. We had tremendous news [Monday] around vaccine development," she said, with the company Pfizer reporting promising results from a clinical trial.

Even if the U.S. can avoid new lockdowns, Blauer added, leaders will likely "have to make some hard decisions in the short term so that we can all get to a place in the long term where we yearn to be."