Accessibility links
FACT CHECK: 2020 Presidential Election Vs. Florida In 2000 President Trump is challenging the results of the presidential election, which his allies have compared to the contested race 20 years ago. But there are many differences between the two.

FACT CHECK: What's Happening In This Election Is Not Like Florida In 2000

FACT CHECK: What's Happening In This Election Is Not Like Florida In 2000 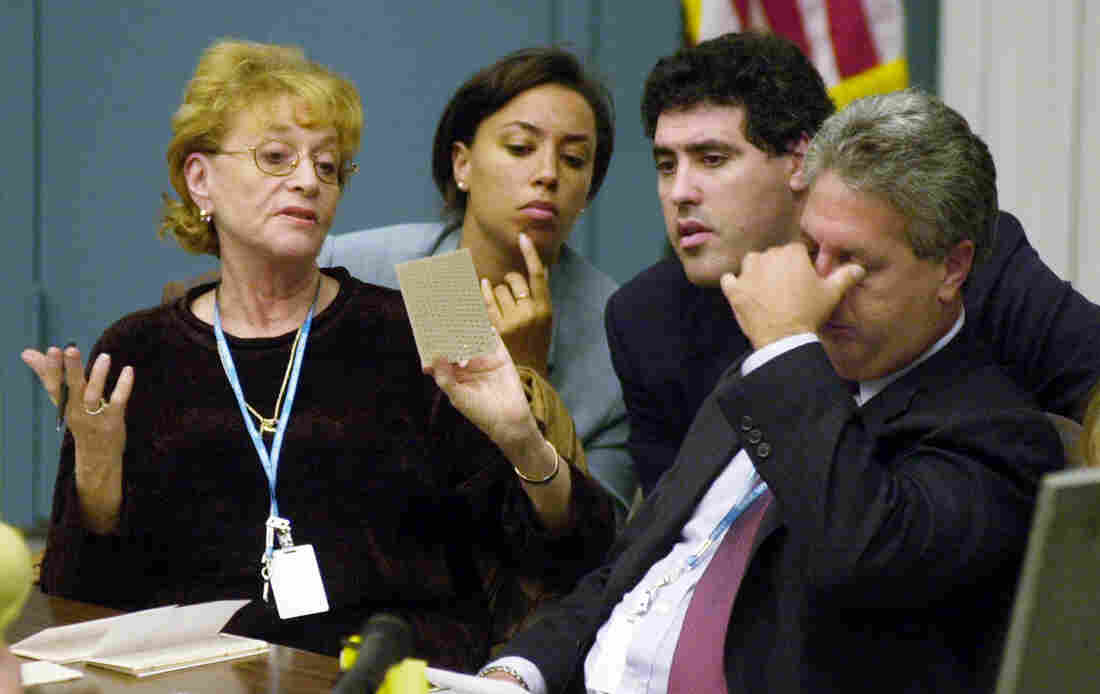 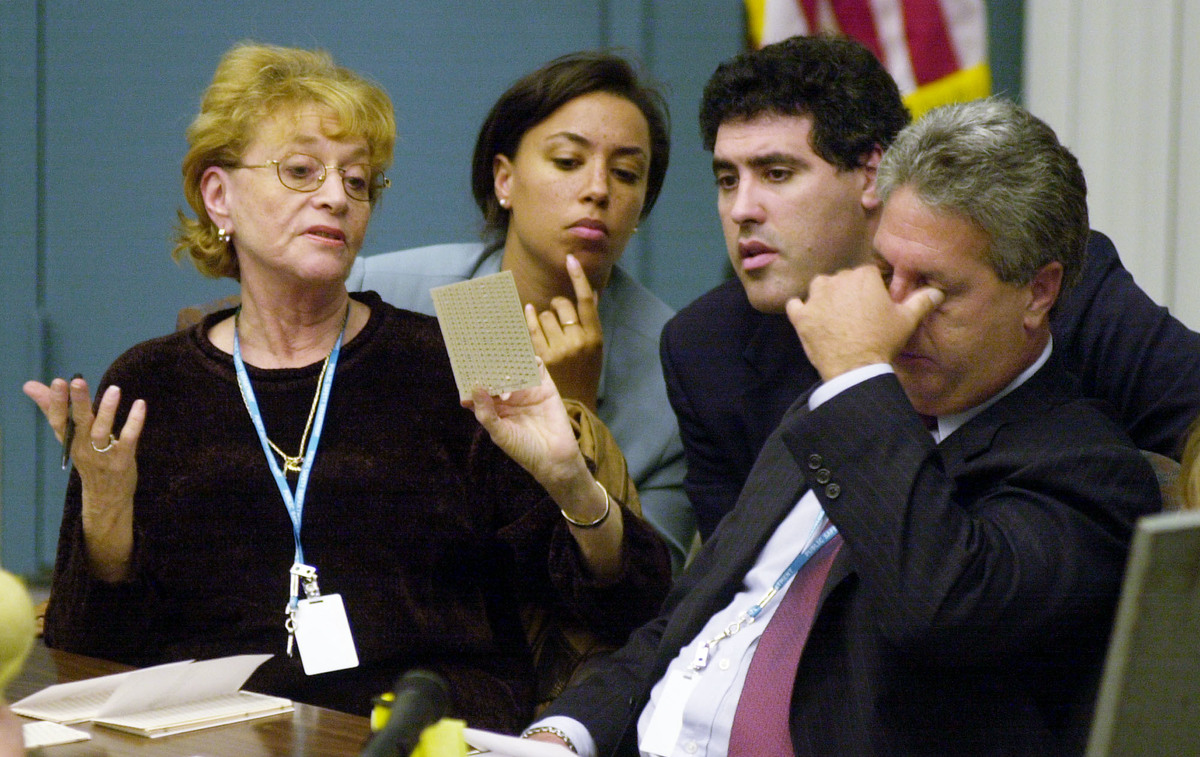 Palm Beach County canvassing board chairman Judge Charles Burton rubs his eyes as board member Carol Roberts (left) shows a questionable ballot to the Democratic attorneys during the hand counting of ballots in West Palm Beach, Fla., on Nov. 22, 2000.

Democrat Joe Biden was declared the winner of the 2020 presidential election Saturday morning.

And yet, President Trump has not conceded or accepted it, and the agency responsible for doling out funds and office space during a transition is denying that money to the Biden team, implying that the results of the election are not yet certain and referencing the "precedent" of the contested 2000 presidential election.

Allies of the president, including the chair of the National Republican Congressional Committee and Secretary of State Mike Pompeo, have also referenced the contest between Democrat Al Gore and Republican George W. Bush as a need to wait for "the votes to be counted" before declaring a winner in this year's election.

"Florida was about one breathtakingly close state," said Ben Ginsberg, who helped lead the legal strategy for Bush around the 2000 Florida recount. "This is nothing like that."

One state vs. several

The 2000 election was decided by 537 votes in one state, Florida. With Florida in Bush's column, the outcome of the Electoral College was 271-266 — about as close as it gets. In fact, it was the closest electoral vote margin since 1876 that saw Rutherford B. Hayes beat Samuel Tilden by just one electoral vote, 185-184.

In the 2020 election, if Biden's leads hold, he is on track to win 306 electoral votes to 232 for Trump. (Somewhat ironically, that's the same margin Trump would have won by in 2016 if there weren't two faithless electors who brought his total down to 304.)

As opposed to focusing attention on a single state, Trump has several lawsuits in courts in multiple states, many of which have already been thrown out. There will be a recount in Georgia, and Trump is seeking one in Wisconsin, which the AP called for Biden, but he's unlikely to win either one because he is down almost 35,000 votes between the two states.

A FairVote study of 27 recounts between 2000 and 2015 found the average vote change in them was 282 votes — nowhere near the gap Trump is trying to overcome.

The president's allegations and conspiracy theories of sweeping voter fraud have so far been without merit. Fraud is hard to pull off in modern elections because of the safeguards in place, including electronic voter registration records, signature matching technology and post-election audits of the vote.

"I think it is more difficult now," Ginsberg said, noting, "The Trump campaign is basing all its actions on the thought that there was fraud, and now they're not able to prove it, so their basic premise is not holding up."

"There is no evidence that any voting system deleted or lost votes, changed votes, or was in any way compromised," they wrote. They added, "While we know there are many unfounded claims and opportunities for misinformation about the process of our elections, we can assure you we have the utmost confidence in the security and integrity of our elections, and you should too."

The math is the math

It's pretty much inconceivable for Trump to win at this point, and here's why — math.

Even if Trump wins North Carolina, where he's leading but which remains uncalled by AP, and somehow were to pull off victories in Georgia and Wisconsin recounts, it still would not be enough for him to get to the 270 electoral votes needed to win the presidency.

He would have to revoke Biden's win in Pennsylvania, too, where Trump is down by more than 55,000.

And remember, recounts change only hundreds of votes, never tens of thousands.

"A couple of the states are within the state recount windows, so they have every right to pursue that remedy," Ginsberg said, "but you'll never find a recount that was overturned that had such a big margin."

What's more, while the popular vote is not determinative of who wins the presidency, it gives a sense of scale. In 2000, Gore won it by 547,398 votes, or just 0.51 percentage points.

In this election, Biden leads by 5.1 million votes and climbing. That is the widest margin of any election, except 2008, in the last 20 years.

Still, like in 2016, when Trump lost the popular vote by almost 3 million, the president continues to try to sell to his followers that he really won and that fraud is to blame. Ginsberg notes that in four decades, poll watchers and studies have found no evidence of systemic fraud in the U.S. election system.

Trump himself created a presidential commission to investigate fraud, and it disbanded in 2018 amid controversy, producing nothing showing systemic problems. Now, Trump's team has the opportunity to prove its repeated allegations in court and has access to state recount systems and has a front-row seat to states' procedures.

"This post-election period is their chance to put up," Ginsberg said. "And if they don't succeed, they should shut up."