Accessibility links
Vaccine Could Unlock Trillions In Spending, Leading To 'Biden Boom' For Economy Pent-up demand from households that have been cooped up over the last eight months could drive a spending boom in the spring, providing a big boost to the economy. 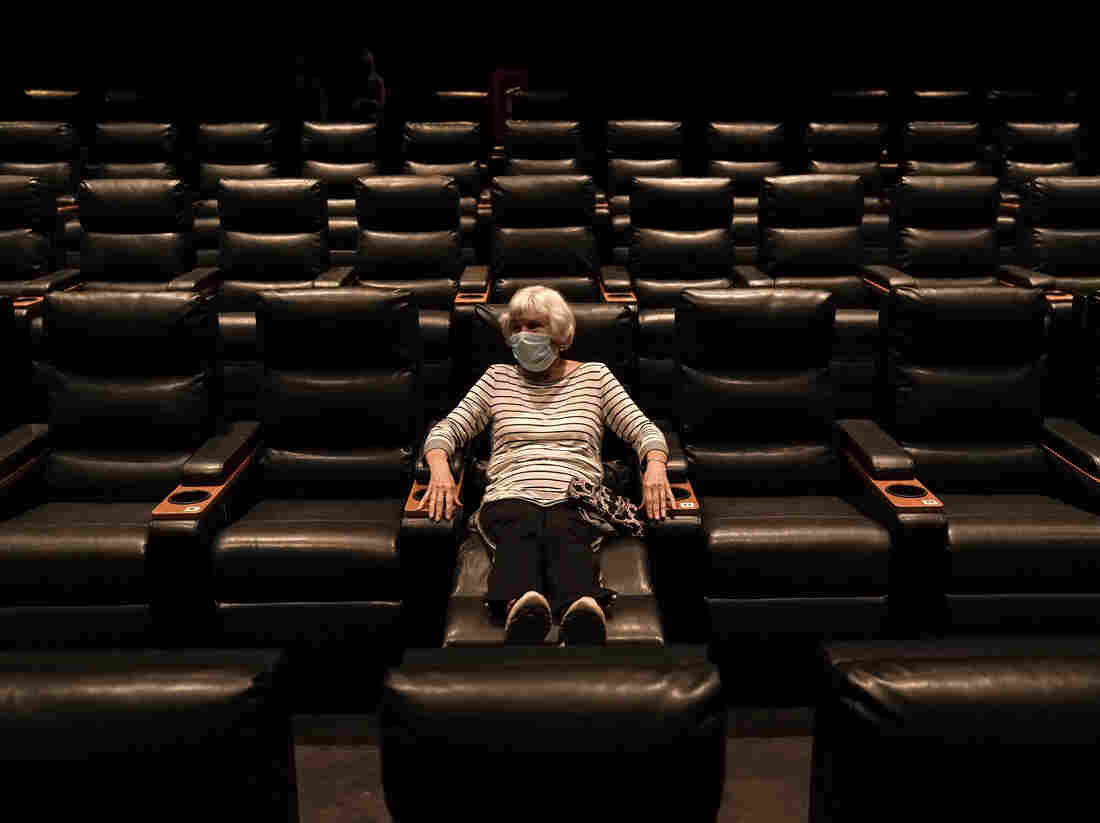 A woman sits in a theater in Irvine, Calif., waiting for a movie to start, on Sept. 8. A COVID-19 vaccine could unleash pent-up spending from households that have mostly avoided activities like going to the gym during the coronavirus pandemic. Jae C. Hong/AP hide caption 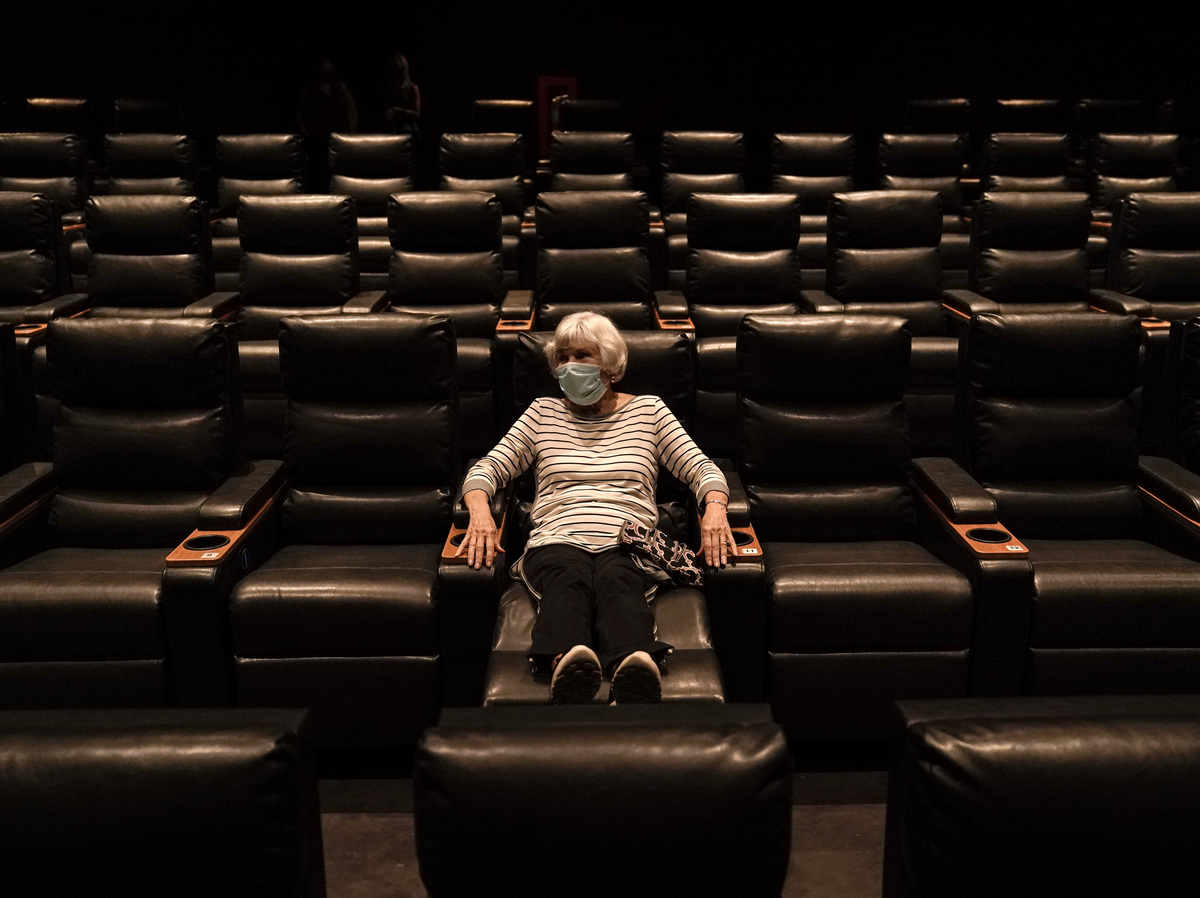 A woman sits in a theater in Irvine, Calif., waiting for a movie to start, on Sept. 8. A COVID-19 vaccine could unleash pent-up spending from households that have mostly avoided activities like going to the gym during the coronavirus pandemic.

What Brandon Fritze misses most this year is belting out Coldplay's "Yellow" at karaoke sessions with his friends.

"I was a big karaoke guy," said Fritze. "I'd be going to the karaoke bar pretty much every night. But since the pandemic started, the bar's been shut down and that wasn't an option. I don't think I've sung in eight months now."

Fritze, an Indianapolis accountant, is among millions of Americans who have squirreled away their money in savings this year as the coronavirus pandemic has put an end to many activities — like going to the gym, restaurants or bars — that were common before the pandemic.

The savings reach $2 trillion, or roughly 10% of the economy. With a successful vaccine, all that money could be steered toward spending, according to economist Ian Shepherdson, ushering in what he calls the "Biden Boom" by the time spring arrives.

"President-elect Biden is arriving in Washington at the right time," said Shepherdson, who's the chief economist at Pantheon Macroeconomics. "The COVID news at the point where he's inaugurated is likely to be horrific. But it won't be for much longer after that."

Not all of that saved-up money will come flooding into the economy at once. Household habits could have changed, and some activities that were skimped on during the pandemic will never be made up, like missed baseball games or haircuts.

"I went quite a long time without getting my hair cut," said Joel Prakken, chief U.S. economist for the forecasting firm IHS Markit. "I'm not going to get three extra haircuts to make up for the ones that I missed during the summer."

It also remains unclear how rough the upcoming winter will be because of surging COVID-19 cases.

Although Pfizer and partner BioNTech this week announced an experimental COVID-19 vaccine that was more than 90% effective, it still needs to clear a lot of hurdles before it becomes widely available.

In the meantime, millions of Americans are still out of work, and Congress has been slow to extend additional relief. That has led IHS analyst Prakken to lower his forecast for economic growth next year from 3.7% to 3.1%.

Prakken thinks it will be two more years before Americans spend on travel, entertainment and other services at pre-pandemic levels.

What's more, even when a vaccine is widely available, it may take time before people feel safe going out and spending money again.

"It would be great in 2021 if all the venues were up and operating again and we could go see some bands," said Pittsburgh librarian Dana Farabaugh. "But I think it's going to be a while before, mentally, I feel OK being in a crowd of people like that again, not wearing masks."

Christie Vezzola, who works for an aircraft-parts company in New Haven, Conn., and her husband have spent more on ice cream and alcohol during the pandemic, but less on everything else.

"We're certainly not spending on any sort of entertainment," she said. "We're not going to the movies. We're not paying for gym memberships or to participate in sports leagues," she said.

Still, there's a lot of other activities that Americans could resume with a vaccine, and that would give a boost to the economy.

Shepherdson thinks that spending could be "the likes of which we've never seen before."

"I don't want to minimize how bad things could be over the next two or three months," he said. "But I think it's also possible to hold the other idea in your head, which is that when spring comes, it's going to be a different planet, really."

And Americans who are ready to spend again would benefit a broad swath of businesses — karaoke establishments, for example.

"The karaoke crowd is kind of a family," said Fritze, the Coldplay crooner. "So it would be nice to get out and see them again."