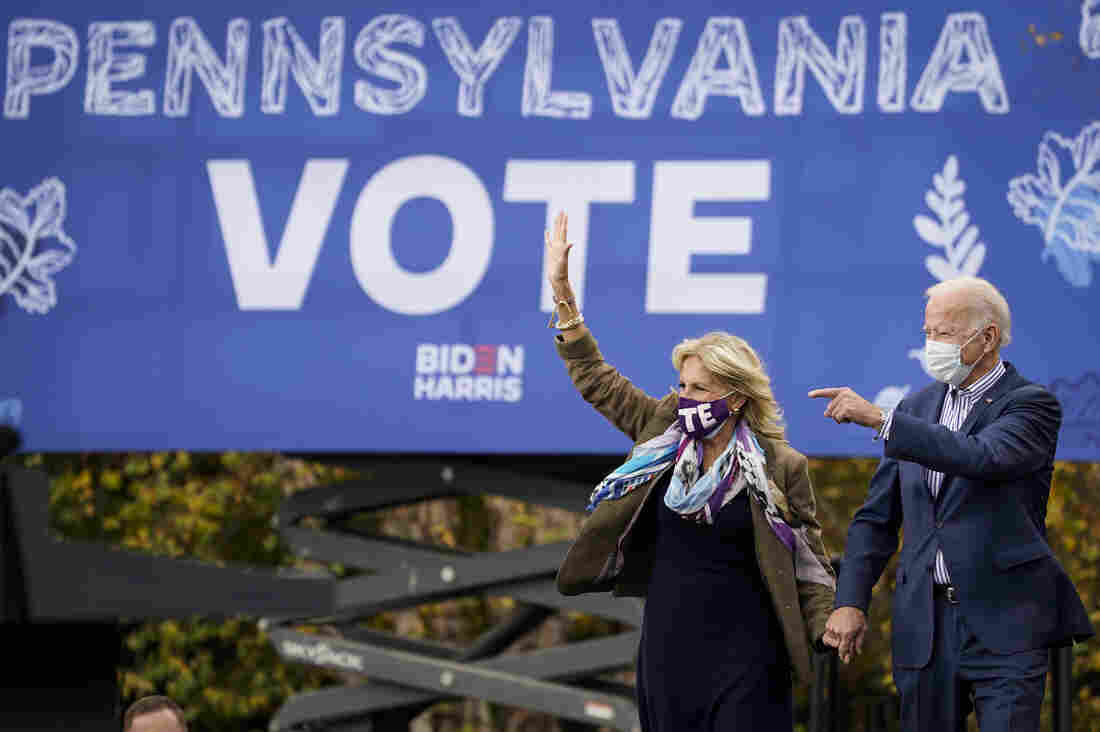 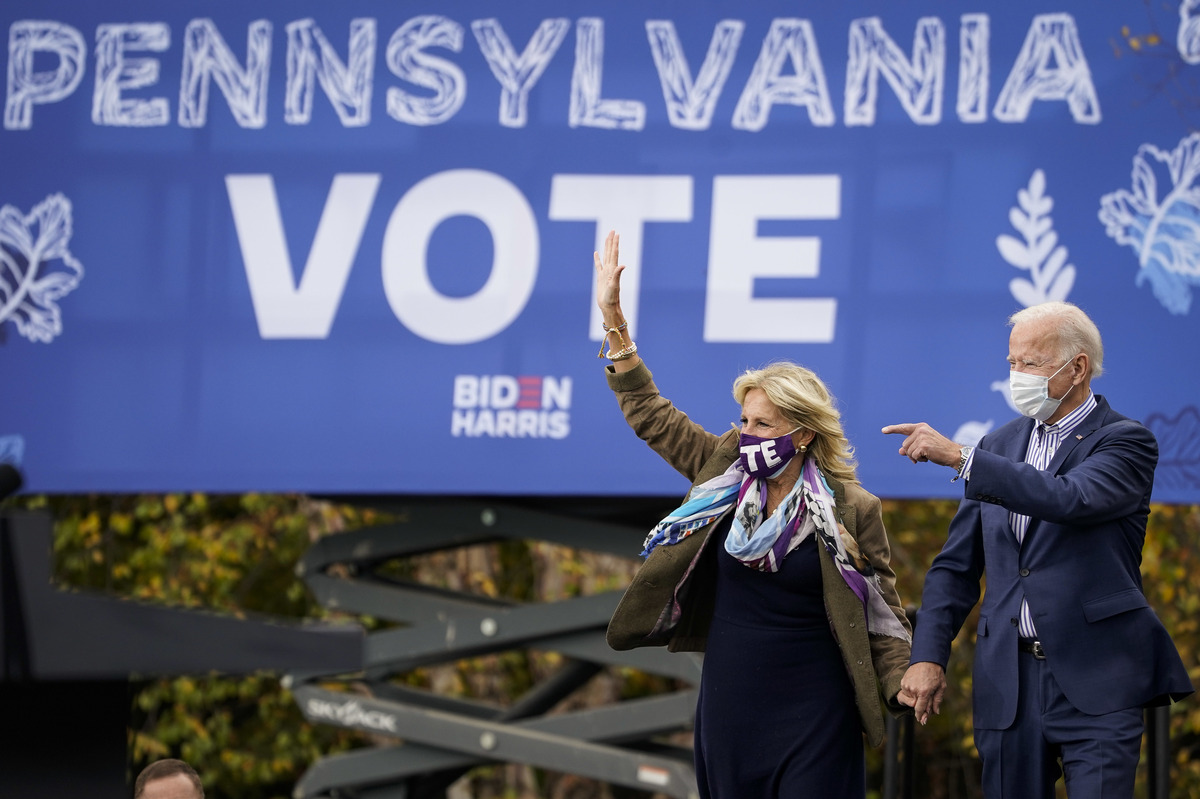 But it was Philadelphia's suburbs and their continued shift to Democrats that helped seal Pennsylvania — and the election — for President-elect Joe Biden.

The four counties that make up the city's suburbs — Chester, Delaware, Montgomery and Bucks — saw a surge this year in both the size of the electorate and support for the Democratic presidential candidate.

That surge came, at least in part, from people such as Carmen Ferrarello.

Ferrarello lives in Upper Dublin in Montgomery County and teaches English at Upper Moreland High School, the school that soon-to-be first lady Jill Biden once attended. He always considered himself a moderate Republican — until Trump came on the scene.

In 2016, Ferrarello didn't vote for either major-party presidential candidate, instead writing in former GOP House Speaker Paul Ryan as a protest vote. But the real change, he said, came as he watched other Republicans rally behind Trump.

"For me, I guess it was the fact that the party just genuflected at his altar," he said. "I remember that press conference where they had this long table, where every person who spoke talked about how wonderful Donald Trump was. ... [I]t was something you would see in North Korea."

In 2018, Ferrarello voted for a full slate of Democrats. He has since given up his Republican voter registration and cast his ballot this year for Biden.

He's not ruling out voting for certain Republicans in the future, but he doesn't consider himself one of them anymore.

"I will never go back to that party," he said.

Ferrarello isn't alone in his shift. The Philly suburbs have trended bluer for years. But 2020's increase in turnout and preference for Biden were striking.

"People who were apolitical, or very, very nonpolitical, became just obsessed with getting rid of Trump. I think the turnout was strictly a response to that," Frank Custer said. He chairs Montgomery County Community College's board of trustees but spent much of his career in local politics and ran, at different points, as a Democrat for county commissioner and state representative.

Custer said as the election approached, he was hearing similar things from a lot of people he knows in the Philly suburbs: The 2016 and 2020 elections felt different.

"Many of those same people just did not like Hillary [Clinton]," he said. "They just didn't like her. They probably didn't vote for Trump, but they may not have gone out to vote."

Montgomery County had the second-biggest surge in voting of any county in Pennsylvania, with over 66,000 more votes cast in 2020. And Democrats captured the vast majority of those gains. In Montgomery alone, Biden received some 57,000 more votes than Clinton did in 2016.

In addition, Chester County swung 7.6 percentage points in Biden's favor, with 39,000 more Democratic voters than in 2016. It wasn't long ago that Chester was a reliably Republican county.

One of Biden's newly captured voters is Jim Hagan, who lives in Chalfont in Bucks County. Hagan is retired now, but his old chemical industry job took him on a lot of international travel — and lately, he said, he has mourned what he sees as a loss of U.S. standing on the world stage.

Hagan voted for Trump four years ago. But this year he couldn't do it. In particular, he thought Trump created too much "vitriol" and "dropped the ball" on the pandemic.

"I was very dissatisfied with his performance," he said. "I find him to be a bit of an outrageous person, not presidential at all. ... He is an embarrassment when you talk to people overseas."

While the Philly suburbs powered Biden's win, he also put up stronger results than Clinton elsewhere in the commonwealth.

Allegheny County, where Pittsburgh is, also saw a sharp increase in turnout and notable shift toward Biden.

Biden was born in Scranton, in Lackawanna County, and while the county didn't quite swing red four years ago, Trump closed the gap significantly. In 2020, Lackawanna saw a 5-point shift back toward Democrats. Farther south, deeply red Cumberland County west of Harrisburg saw a 7-point move to the left.

But while there is clear evidence that Biden energized voters in the suburbs and some other places, it wasn't a wholesale repudiation of Trump and his policies.

Despite losing the state, Trump has, so far, earned over 372,000 more votes than in 2016. He increased his vote total in every county and his margin of victory in about half of the counties west of the Appalachian Mountains. Montgomery and Bucks counties each saw about 20,000 more votes for Trump than in 2016.

And despite the claims from the president's surrogates, Philadelphia County could see a notable decrease in support for the Democratic candidate. Trump's vote count has so far increased by almost 20,000 in the Democratic stronghold, while Biden has so far garnered about 3,700 less votes than Clinton did in 2016.

Provisional ballots are still being counted in Philadelphia, but overall, it also appears the city's turnout didn't shift much from 2020 to 2016.

Republicans also had some surprising successes down ballot.

Political analysts had speculated that Democrats could flip at least one state legislative chamber away from longstanding GOP control, likely by ousting moderate Republicans in the Philadelphia suburbs. And Democratic strategists talked about making inroads in smaller suburbs, such as outside Harrisburg and Lancaster.

Yet this did not happen. Instead, voters appear to have split their tickets at unusually high rates — voting for Biden but then Republicans down ballot.

Democrats ended up losing a net of three seats in the state House — and could lose a state Senate seat depending on provisional ballot results. Two of the three Democratic candidates for major statewide offices — which had been held by all Democrats — also lost.

Pennsylvania's congressional delegation, which is split evenly between Republicans and Democrats, remains unchanged despite several competitive races for GOP incumbents.

In one telling example, Republican Rep. Brian Fitzpatrick, who represents the 1st Congressional District, which includes portions of Bucks and Montgomery counties, won reelection by a surprisingly large 13 percentage points.

"People were kind of thinking that this was going to be a change election," said Ben Forstate, a political analyst based in western Pennsylvania. "And it wasn't — for almost everybody besides Donald Trump."

These phenomena — higher turnout, increased suburban support for Biden, down-ballot Republicans outperforming predictions — are not unique to Pennsylvania. These trends are cropping up across the nation this year.

All of this has left politicians across the country, on both sides of the aisle, with a question as they move into the post-Trump era. Is this the new normal in American elections?

Montgomery County's Custer, for one, doesn't think so.

"I don't know if anything that happened in this election at the top of the ticket will carry over to '24 or beyond," he said. "I think in this case it was Trump, and Trump alone."