Accessibility links
Is Trump's Next Big Foe Fox News? Since Election Day, President Trump has attacked Fox News repeatedly, particularly its newsroom. Now comes chatter from Washington that he wants to start up his own media outfit to take on Fox. 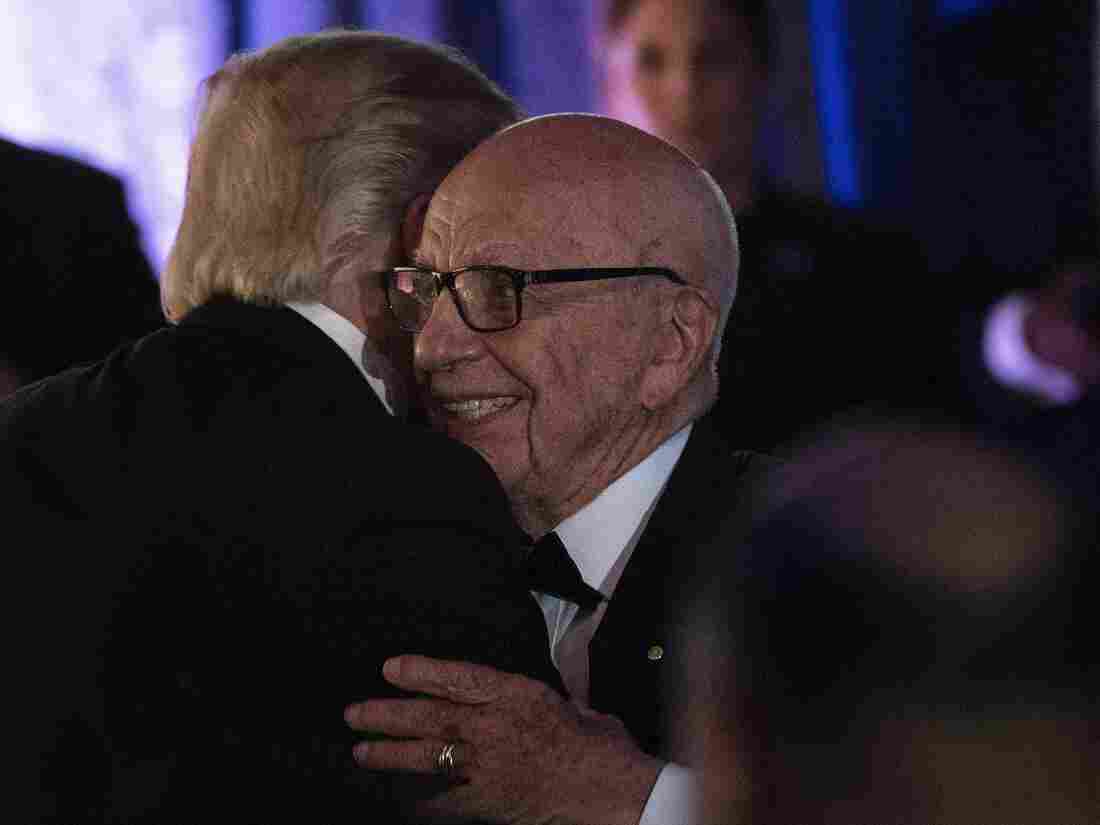 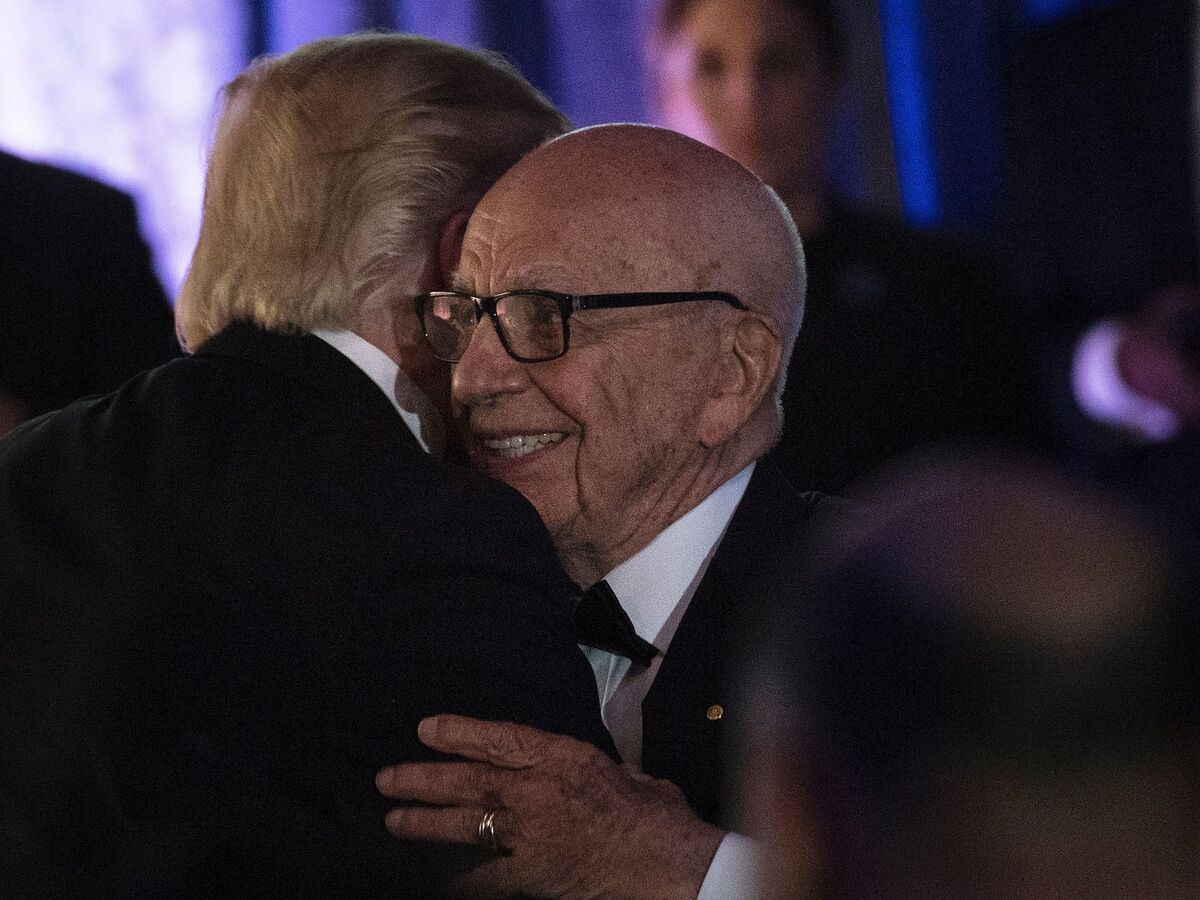 President Trump embraces Rupert Murdoch, co-chairman of Fox Corp., at a dinner in 2017. Once close, Trump is now angry at Murdoch's Fox News over its election coverage.

A trial balloon, a Twitter tirade and a turn in TV ratings have led to a ton of chatter: After his election loss, will President Trump's next target be Fox News?

Since Election Day, Trump has stewed publicly and privately over Fox's projection of Arizona for Joe Biden, a projection replicated Thursday by other major television networks. While Fox's opinion hosts have bathed him in glowing approval and even given ballast to unfounded claims of voter fraud, Trump has resented its news coverage, which has acknowledged Biden as the president-elect.

"@FoxNews daytime ratings have completely collapsed," Trump (or one of his aides) tweeted on Thursday. "They forgot the Golden Goose. The biggest difference between the 2016 Election, and 2020, was Fox News!"

.@FoxNews daytime ratings have completely collapsed. Weekend daytime even WORSE. Very sad to watch this happen, but they forgot what made them successful, what got them there. They forgot the Golden Goose. The biggest difference between the 2016 Election, and 2020, was @FoxNews!

On Thursday morning, Axios' Mike Allen, the recipient of many a favored leak, reported that the president was weighing the launch of a Trump-branded digital media outfit to take on Fox News. The idea would be to charge a monthly fee to MAGA fans — much like Rush Limbaugh's Dittoheads — to peel away the $5.99 monthly fee that subscribers pay to receive Fox News' even more conservative digital service called Fox Nation.

And that missile arrived during what was already a barrage of anti-Fox venom. Trump has tweeted out links from conservative sites Breitbart and One America News, retweeted numerous fans hailing the conservative Newsmax channel and site. Oh, and he trashed Fox News, jabbing the Trump-friendly network where television executives care most: right in the Nielsens.

Trump then retweeted numerous people hitting Fox for being unfair. Several said they were switching to Newsmax. Sure enough, the Apple App Store shows Newsmax as the seventh-most downloaded application. Its television ratings, usually modest at best, beat the Fox Business Network and CNBC, according to standard industry estimates. Former Fox News reporter Greg Kelly's Newsmax show has taken a strong pro-Trump turn. As a result, it's received a lot of attention from the president and his followers.

Presumably, Trump could start his own venture or team up with one or more of Fox's smaller rivals.

Inside Fox, executives and journalists speaking on condition they not be named say they're not worried but they are taking note.

"Fox is trying to play it on both sides — no one is able to tell you what they are," Newsmax CEO and founder Christopher Ruddy argues. "They have a large audience. I would argue that's from momentum from the Roger Ailes years."

Ailes, the force behind Fox as its CEO and then its chairman, was forced out by the controlling Murdoch family in July 2016 after a massive sexual harassment scandal. He died the next year.

"That momentum has propelled us into this fiscal year," he told shareholders and analysts. "From Memorial Day through Election Day, Fox News was the No. 1 network in prime time amongst all broadcast and cable networks."

Earlier in the month, Murdoch told analysts, "We have always thrived with competition."

Fox has been the nation's No. 1-rated cable station for nearly all of the past two decades. Under President Barack Obama, it flourished as the voice of the opposition, in the words of then-Fox Executive Vice President Bill Shine. (Shine later served in the Trump White House for a time, managing communications for the president.) Trump's ability to drive ratings skyward was an unexpected windfall for Fox, as his repeated appearances touting the anti-Obama "birther" conspiracy endeared him to many Fox News viewers.

Each side thinks they have enabled the other to prosper; each is licking its wounds.

Now Fox is considering what life would look like if Trump were to ally with the far-right One America News Network or The Blaze or Newsmax or some combination of all three. Fox hosts and reporters are being torched on social media by Trump fans who say they were formerly Fox fans; at times you can see its journalists having to justify on the air why they are contradicting officials of the White House and the Trump campaign.

Some thanks for a network that, according to the liberal journalism watchdog Media Matters for America, promoted conspiracy theories that cast doubt on the vote more than 250 times — continuing after its own political desk called the election for Biden.

Yet it seems unlikely that Trump — notoriously unwilling to put his own equity into his ventures — can or will mount a serious challenge.

"I don't think he fully realizes the enormous cost and hurdles that it could take," Ruddy, a friend and adviser to the president, tells NPR. Yet that's one thing Ruddy could offer Trump once he's out of office: a network to rebrand as his own, either in name or deed.

For that matter, even in his anger, Trump has promoted the top Fox opinion hosts amplifying his frustration — including Sean Hannity, Maria Bartiromo and Lou Dobbs — some of whom are his champions, allies, advisers and friends.

Among the likely options: Rupert and Lachlan Murdoch shell out eight figures to keep Trump on their shows, and off those of their rivals. It would be cheap at the price. And it would help Fox deflect and rechannel the resentment of Trump's hardest-core fans so it can enter the Biden era guns blazing.