Accessibility links
Book Review: 'Written In The Stars,' By Alexandria Bellefleur A free-spirited astrology blogger and a straitlaced insurance actuary agree to fake a relationship — and then really fall for each other in Alexandria Bellefleur's charming queer romance. 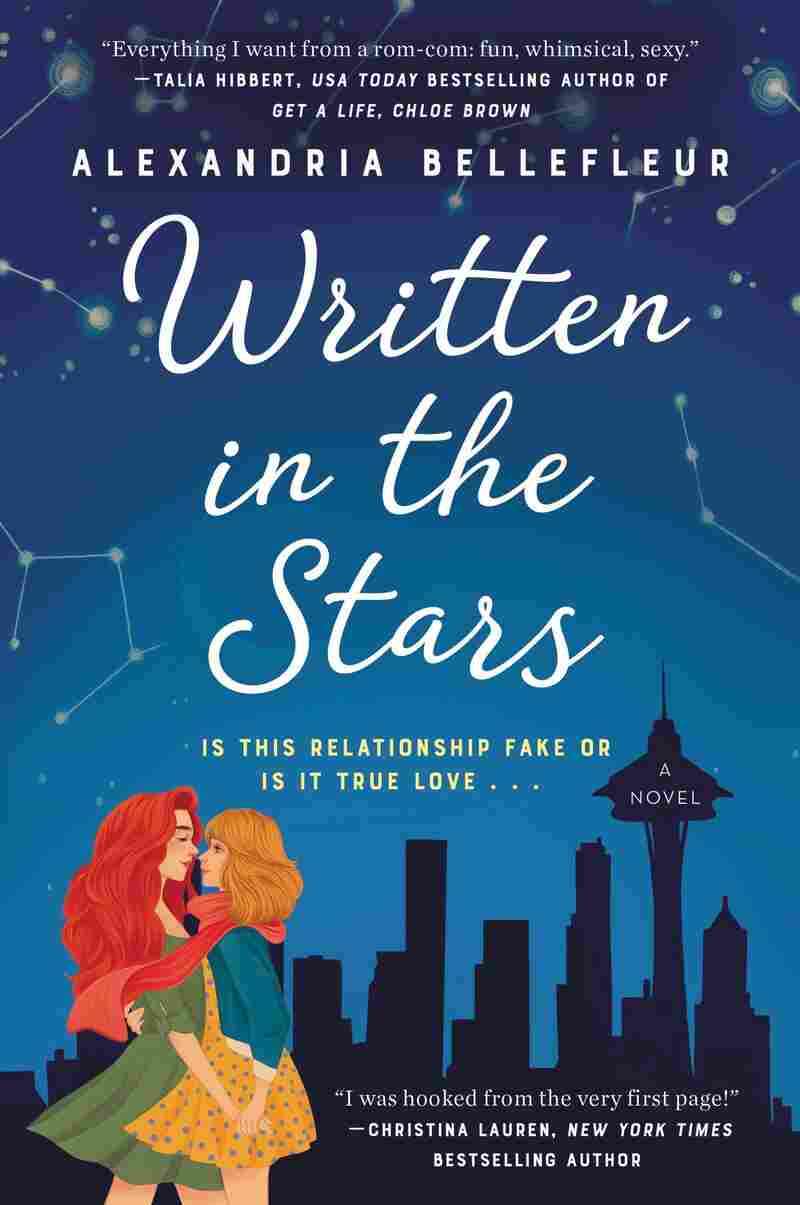 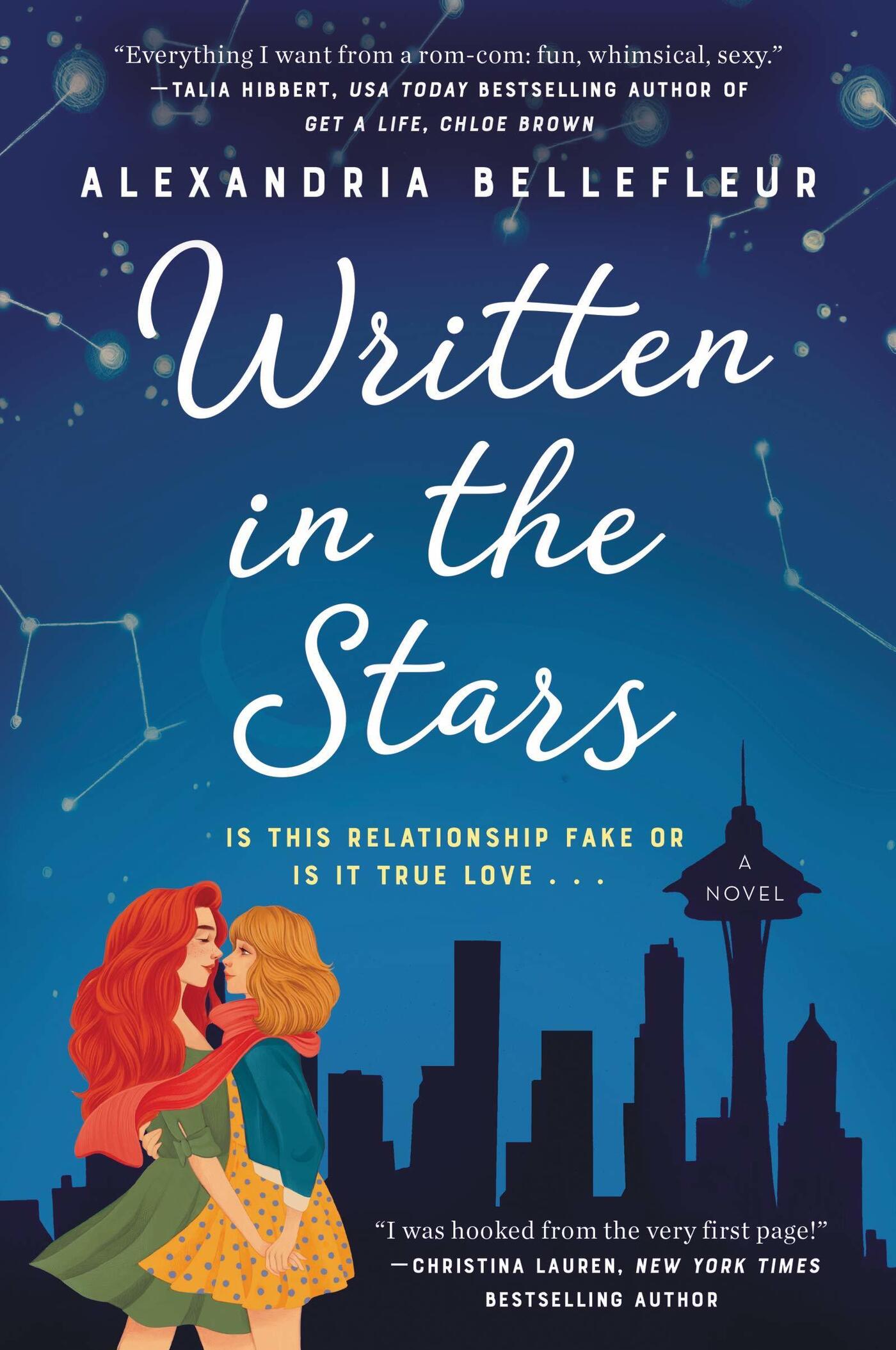 Written in the Stars, by debut novelist Alexandria Bellefleur, is a queer romance about two women with opposing life goals and very different personalities who stumble into a fake relationship that should've come with a warning: Love is right around the corner, just you wait and see!

The brightest stars of Written in the Stars are its engaging main characters, who pretend to be dating to keep their respective family members from interfering endlessly with their lives.

Elle Jones is a 20-something professional astrologer, who along with her roomie, Margot, runs Oh My Stars, a popular horoscope account on Twitter and Instagram. They are also the authors of a yet-to-be-released book on the same topic and are just about to sign on as consultants to a dating app called OTP. But Elle's family is not keen on her dropping out of grad school to pursue a career as a social media astrologer. They make her feel like an outsider, and her career choice only reinforces her family's concerns about her maturity and future.

On the other hand, Elle does have the confidence of Brendon Lowell, the owner of OTP — the acronym means One True Pairing in fan fiction — who wants to hire Elle and Margot to add astrology birth dates to his app's algorithm. (Both Darcy and Margot secretly love fanfiction, a fact that gets revealed later in the story to heartwarming effect.)

Now, while the ink dries on the OTP agreement, Brendon learns Elle is bisexual and single — and since his life mission is to fix his sister Darcy's love life, he arranges an introduction between Elle and Darcy.

Darcy Lowell works in the insurance industry and is focusing on her professional certification exam — but more importantly, she's avoiding dating in the wake of a terrible breakup: She discovered her soon-to-be-bride and supposedly "perfect match" in bed with one of their mutual (now former) friends. The event left Darcy unhinged. Now, she believes she's happier and emotionally safer on her own, watching daytime soap operas and climbing the corporate insurance ladder.

In the opening, a mistaken identity meet-cute nails the opposites attract storyline in one laugh-out-loud scene that centers around a glass of wine. Despite the apparent failure of their first meeting, Elle and Darcy have chemistry, and when the notion of faking a relationship comes up, both agree to the charade. Still, both also fear the inherent dangers of getting too close — or not getting close enough. From this point, the story moves along at a decent will they/won't they pace.

Now, when Bellefleur gives you opposites, she means it — Elle is a romantic and a risk-taker and aims for happy-ever-afters, despite a shaky track record. Darcy no longer believes in romance and seeks every opportunity to avoid it. (Just so you know, Darcy drinks expensive wine and Elle is a wine-in-a-box gal.)

Written in the Stars has two often-used romcom tropes — opposites attract and fake relationships — at the center of its story. This does risk a predictable plot, but Bellefleur uses her tropes not only as obstacles to romance but as a means to fill in the gaps in her characters' personalities.

We get to know these women as they're getting to know each other, on a journey through double-dates, Thanksgiving, Christmas, and more. Lots of fun moments reinforce all the ways these two could work together if they pay attention.

Despite their differences, despite the obstacles that should keep them apart, Elle and Darcy not only find a way to be together, but their journey is so rich, so embedded in who they are, we can't help but root for them.

Despite their differences, despite the obstacles that should keep them apart, Elle and Darcy not only find a way to be together, but their journey is so rich, so embedded in who they are, we can't help but root for them. It's also educational; they model the way a strong relationship can work, which is always a good read.

Some of the book's other highlights include its use of text messaging, which never looked so good on the page! The use of emojis and text etiquette, combined with a regular listing of astrological updates from Elle and Margot's Oh My Stars kept me engaged as I checked to see how my zodiac sign fared when these lists popped up.

Also, the fan fiction mentions made me happy (as a former — okay, sometimes current — peruser of fanfic, you bet I noticed them), and the phrase OTP has never been so aptly applied.

A delightful, heart-warming romance, Bellefleur's novel shows eloquently how two characters can fall in love more deeply than either dared to dream. So whether you follow astrology or not, Written in the Stars has the reading you won't want to miss.