Accessibility links
Life Is Hellish Enough — That's Why I Had To Stop Playing 'Hades' The hit video game about escaping the underworld is immensely popular and irresistibly well-crafted — but despite its promise of infinite content, the replay value begins to fade eventually. 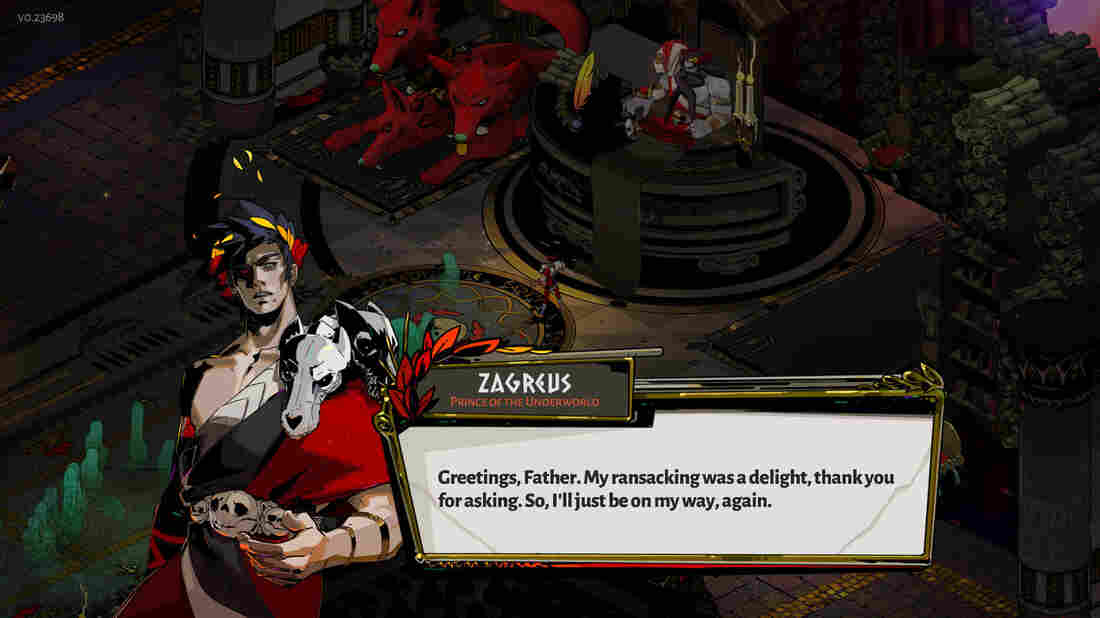 In Hades, you play as the son of the titular deity, battling to escape the underworld. Supergiant Games hide caption 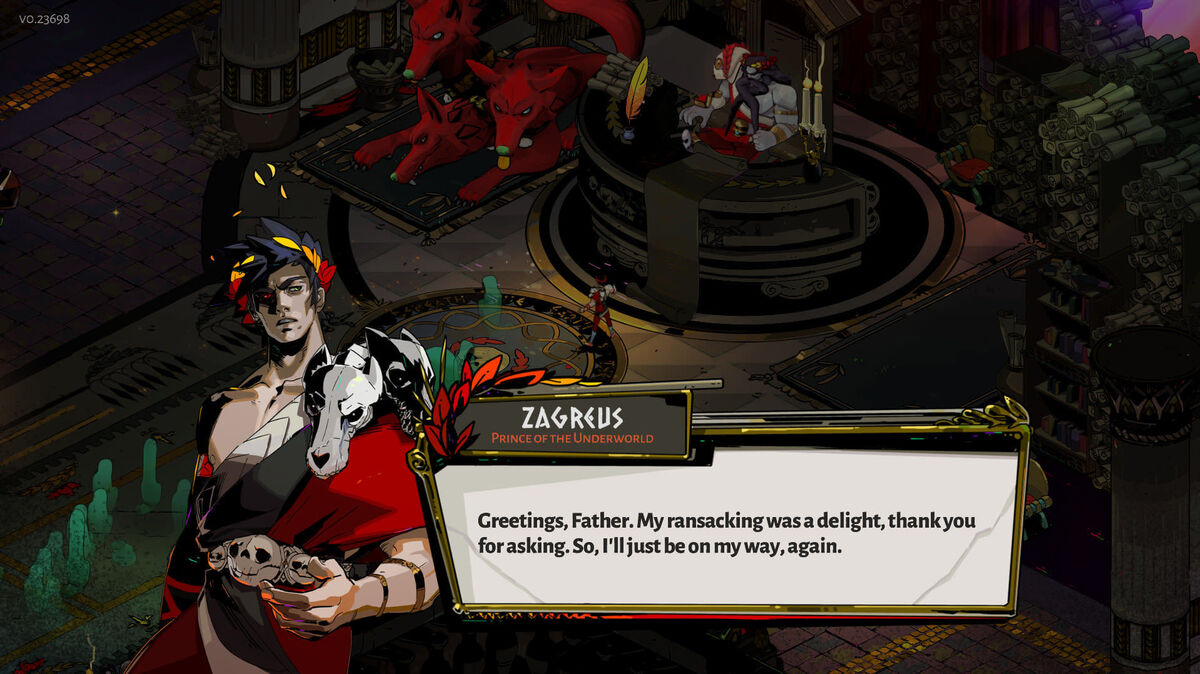 In Hades, you play as the son of the titular deity, battling to escape the underworld.

In a year when it's tempting to view every piece of pop culture through the lens of the pandemic, Hades, a video game literally about being unable to escape stultifying domestic confines, is particularly well-suited for this new genre of corona-inflected close reading.

Granted, its lavish, labyrinthine setting is grander than most homes but, as you might have guessed from its title, this underworld abode is not exactly a good time. My own apartment, while a site of increasing boredom and frustration, doesn't include fiendish traps and bull-headed enemies; mercifully, I don't have to beef with a curmudgeonly father each time I want a breath of fresh air.

In the month since its release, Hades, developed by Supergiant Games, has found monstrous success, partly because of these real-world parallels, but mostly because it is an exceptionally well-made video game. You play as the debonair Zagreus, prince of the Greek underworld who longs to experience sunlight for the first time and make contact with his estranged, mortal mother.

What's more surprising about Hades, outside of the eerie timing, is how it has achieved crossover appeal as a roguelike, a video game genre notable for its difficulty, obscure rules, and relentless repetition. These were all characteristic of Rogue, the genre progenitor which arrived in 1980 and tasked players with escaping a lo-fi, randomly generated dungeon. There was no save feature, so death — which could arrive swiftly and surprisingly — ensured any progress was mercilessly discarded (a design trope called permadeath). At the end of each run, the game would transport your avatar back to the beginning, only to let you attempt the journey again in a dungeon newly cooked-up by the game's code. In the 40 years since, roguelikes built on this legacy, from 1987's NetHack to 2008's Spelunky have leant into the punishing, often sado-masochistic quality of the original.

The Grecian underworld, a disorienting, metaphysical space of tribulations both numerous and painful, is perfectly suited to the roguelike. Hades, however, is marginally less spiky than many entries in the genre; the difficulty is toned down just a notch, the visuals drip with Athenian opulence, and the blood-splattered violence whips by with the vim and vigor of stylish Japanese action games such as 2009's Bayonetta. 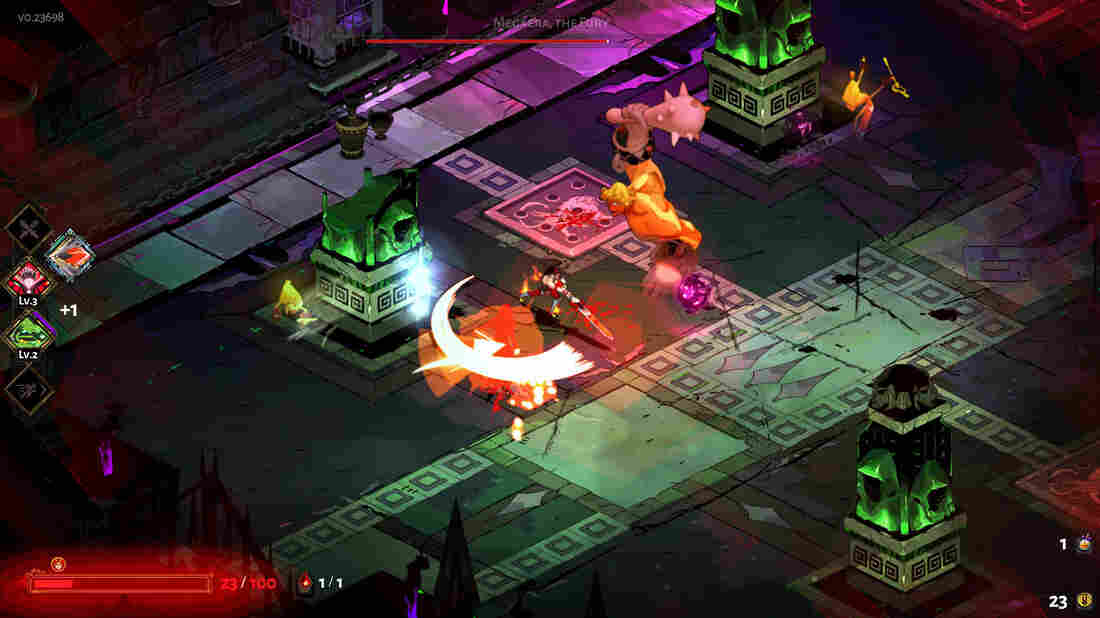 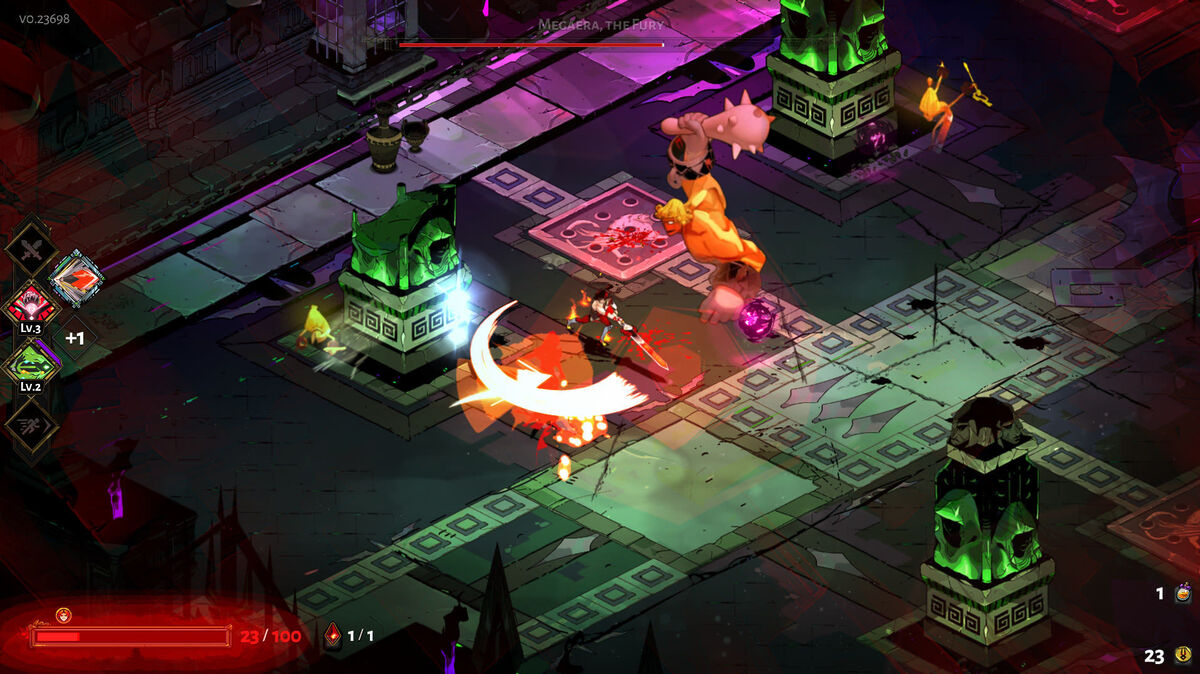 Hades has a striking, blood-spattered look.

Crucially, each death is met with a minor reward, not in terms of progress but in resources which can be used to purchase upgrades — or, more tantalisingly, nuggets of court gossip revealed through conversations with immortals. As a result, my first few breakneck hours with the game were a salacious and violent frenzy; I was playing on the portable Nintendo Switch, so the game accompanied me as I paced from room to room; Hades quickly attached itself to my daily routine.

Through intense repetitive play, I began to uncover the deeper meaning within this irresistibly well-crafted game. I learnt of how colossally messed-up this Olympian family really is, and the all-too-relatable desire of Zagreus to escape their claustrophobic chatter. Through failed escape attempts, I reflected on our uncanny ability to persist, perhaps foolishly, in the face of adversity, and tasted life's cruel ability to snatch away whatever progress we make. These are deep, universal themes that, pandemic or not, Hades masterfully conveys. But then, as per its roguelike heritage, the game kept going, even after such questions had been posed and arguably resolved; it became apparent that the game's structural loop wasn't just tragic for its perpetually hopeful protagonist; I was beginning to feel its stifling effects, too.

Playing 'Hades' on the cusp of a bleak winter — infection rates rising, lockdowns tightening, daylight dwindling — exacerbated my own dawning sense of feeling hemmed in, perhaps even of dread.

Greg Kasavin, writer and designer at Supergiant Games, described Hades as "infinitely replayable" in an interview with the Washington Post. By that metric, he reasoned, it should have "infinite content." Because of their computational character, video games are well-placed to provide such endless interactions (a non-video game equivalent is the generative ambient music of Brian Eno). The challenge inherent to the design of roguelikes is how to keep the gameplay interesting while asking the player to do the same thing over and over again; this is a task as impossibly Sisyphean as playing Hades itself. The game, to its great credit, gets closer to transcending the tedium of repetition than many others. Colorful writing, beautifully illustrated characters, and expressive combat maintained my interest, even as the richness of the experience began to dissipate.

Playing Hades on the cusp of a bleak winter — infection rates rising, lockdowns tightening, daylight dwindling — exacerbated my own dawning sense of feeling hemmed in, perhaps even of dread. When life is such a grind, I want art to whisk me away; to show me a different perspective rather than my own. The game, like my experience with so many other roguelikes, felt so good until, ultimately, it didn't. I'm left with an emptiness, which is a disappointing way to feel having sunk so many hours into this inarguably impressive video game. Like Zagreus, I'm searching for the metaphorical kiss of sunlight; in Hades, I found an inescapable darkness.

Lewis Gordon is a journalist and writer based in Glasgow. He writes about culture, technology, and the environment, and has previously written for Vice, The Verge, The Nation, and others