Accessibility links
Kate Winslet's 'Ammonite' Takes On Paleontology, Patriarchy And Passion Kate Winslet and Saoirse Ronan star in the new film, which imagines a romantic relationship between British paleontologist Mary Anning and Charlotte Murchison, the young wife of a geologist. 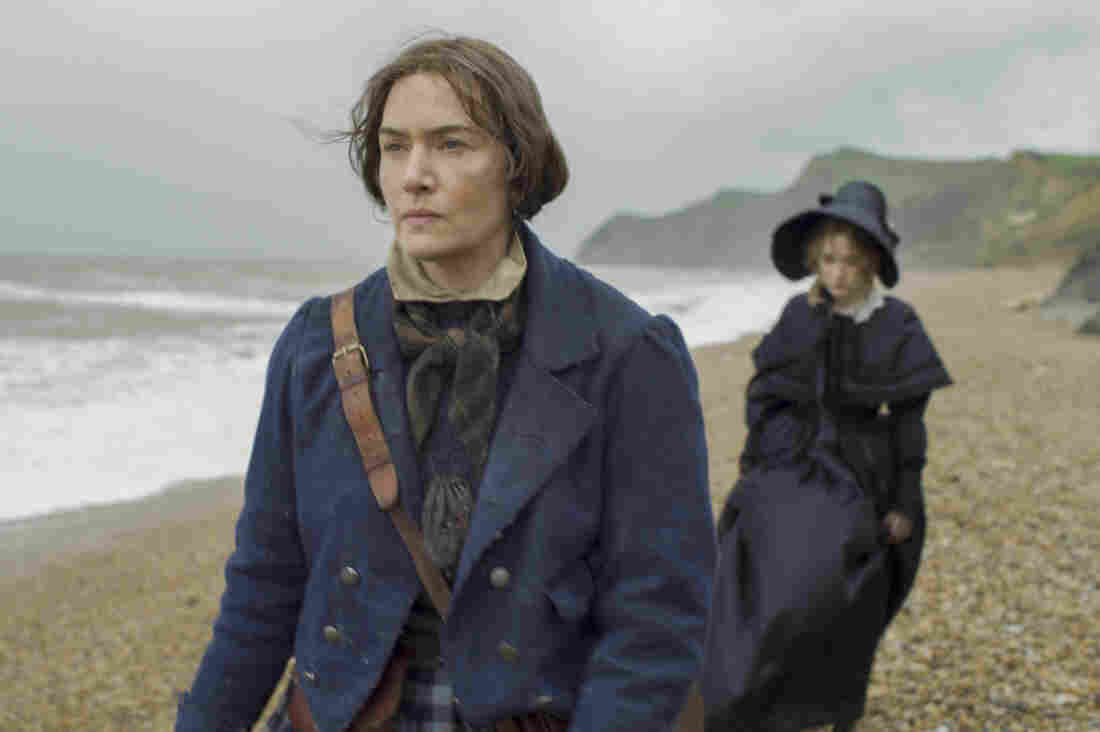 "I feel proud of myself now, as a 45-year-old woman, to have just played a role in which ... my age really shows on my face," says Kate Winslet. She plays British paleontologist Mary Anning in the new film Ammonite. Neon hide caption 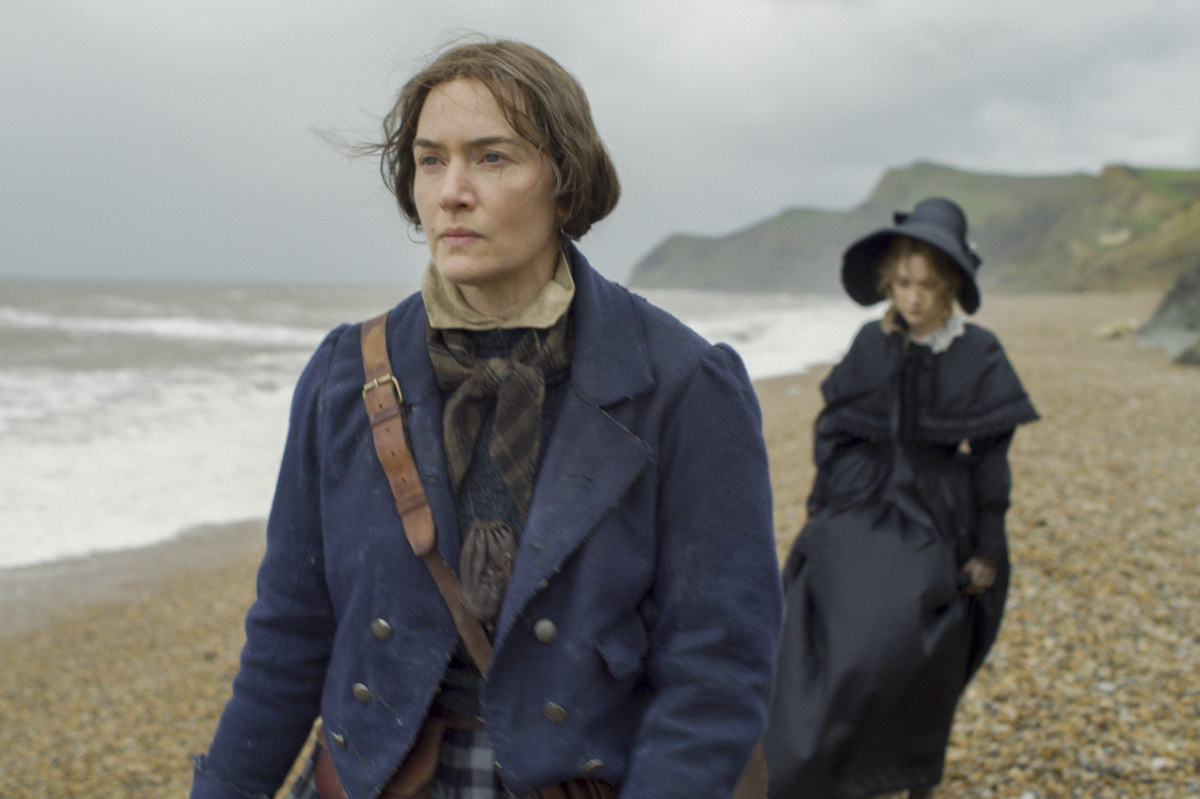 "I feel proud of myself now, as a 45-year-old woman, to have just played a role in which ... my age really shows on my face," says Kate Winslet. She plays British paleontologist Mary Anning in the new film Ammonite.

Mary Anning was just 12 years old in 1811 when she unearthed the skeleton of an ichthyosaur, a marine reptile that lived some 200 million years ago – and yet, most people have never heard of this self-taught, British paleontologist. With her new film Ammonite, Kate Winslet hopes to change that.

Anning's hands were always raw from digging, Winslet says. "She made so little money, she was completely impoverished. And yet she was remarkably uncomplaining. This was a stoic, kind, compassionate person."

Winslet and director Francis Lee wanted to honor Anning's hardship. "All of her extraordinary finds and historical successes [were] covered over by powerful rich men who, frankly, weren't as clever as she was," Winslet says.

Heartbreaking And Hopeful, 'Ammonite' Is A Wind-Swept Tale Of Forbidden Love

The film imagines a romantic relationship between Anning and Charlotte Murchison — the young wife of a geologist — played by Saoirse Ronan. It's fiction, but Winslet prepared for the role by reading a lot of historical letters. She was struck by how deeply women depended on their female friendships.

"They needed those sisterhoods," Winslet says. "And sometimes those friendships did spill over into more intimate, passionate connections."

On the portrayal of same sex relationships on-screen

We need more films like this so that the world can reach a place that is much more equal and compassionate — where ... LGBTQ relationships are simply normalized and shown without fear or hesitation and just become part of the mainstream.

It's about conditioning, isn't it? It's about how we present these things to youth, to our children, and how we as an audience, I think, are willing to receive stories like this within the mainstream. ... With films like Ammonite, I hope that we have been able to contribute to that conversation.

I feel proud of myself now, as a 45-year-old woman to have just played a role in which ... my age really shows on my face. I think it shows in my physical self and I feel tremendously proud of that. I'm not trying to hide my age. I'm not trying to cover up who I am or the fact that I've had three children.

That, to me, is part of wanting to really lead with some degree of integrity, because I think when I look back at having played certain roles in films where I have fallen too easily into stereotypes that surround heterosexual romance on screen, I think I have perhaps felt a little bit objectified, but very automatically so, in ways that I think we've all been guilty of a little bit.

On being objectified "automatically"

I've never felt forced to do anything I haven't wanted to do, not remotely. I've never felt I've had pressure put on me. I've never felt manipulated. But within that, have I really used my voice? Have I really said: "Hang on a minute, why would you position my character in the corner of the room by that nice, flattering light that's coming through the window just because you want to see the curves of my breasts there?" Like, why? That's objectification, isn't it?

I never felt that at the time I was there. I was part of the choreographing of whatever fictitious scene I just described. ... I want to hold myself accountable and make sure that I am leading on the front foot and being sincere and setting a good example and hopefully doing something that might be a little bit inspiring along the way to a younger generation. That's really important to me.

On the way she's trying to push back on heterosexual stereotypes

I've already gone back and reshot a scene on the project that I'm working on now with HBO. We went back and we reshot the scene because, on reflection, and having been a part of Ammonite, and seeing how it made me feel when I saw the final cut ... I turned to the writer and the director, I said, "We have to redo this. This is not how this would have played out. You know, guys, we've all lost our way here a little bit." ...

You know, it will often say in a script the woman gets on top, "dominating now" or "taking control now." But why do we have to use those words? Why can't it just be that the woman knows what she wants or that she's playing an equal part in that scene? ... People often do it completely unintentionally. But again, it's because we all tend to fall victim automatically to these sort of heterosexual stereotypes.

On speaking publicly about how she regrets working with directors Woody Allen and Roman Polanski, who have both been accused of sexual assault

Life has to go on and we have to hold ourselves accountable for past regrets, and it's something that I have spoken about because it is so important to me and because, you know, maybe other people can come forward and say similar things.

Isabella Gomez and Ed McNulty produced and edited this interview for broadcast. Beth Novey adapted it for the Web.