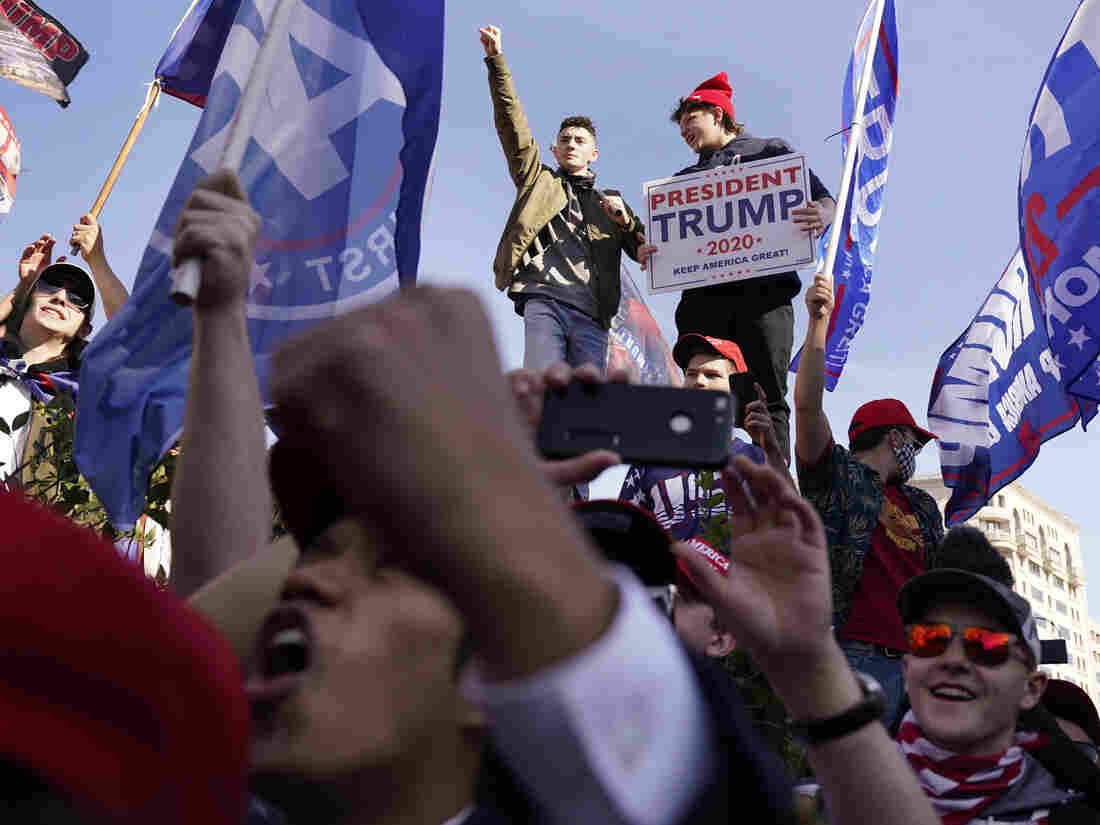 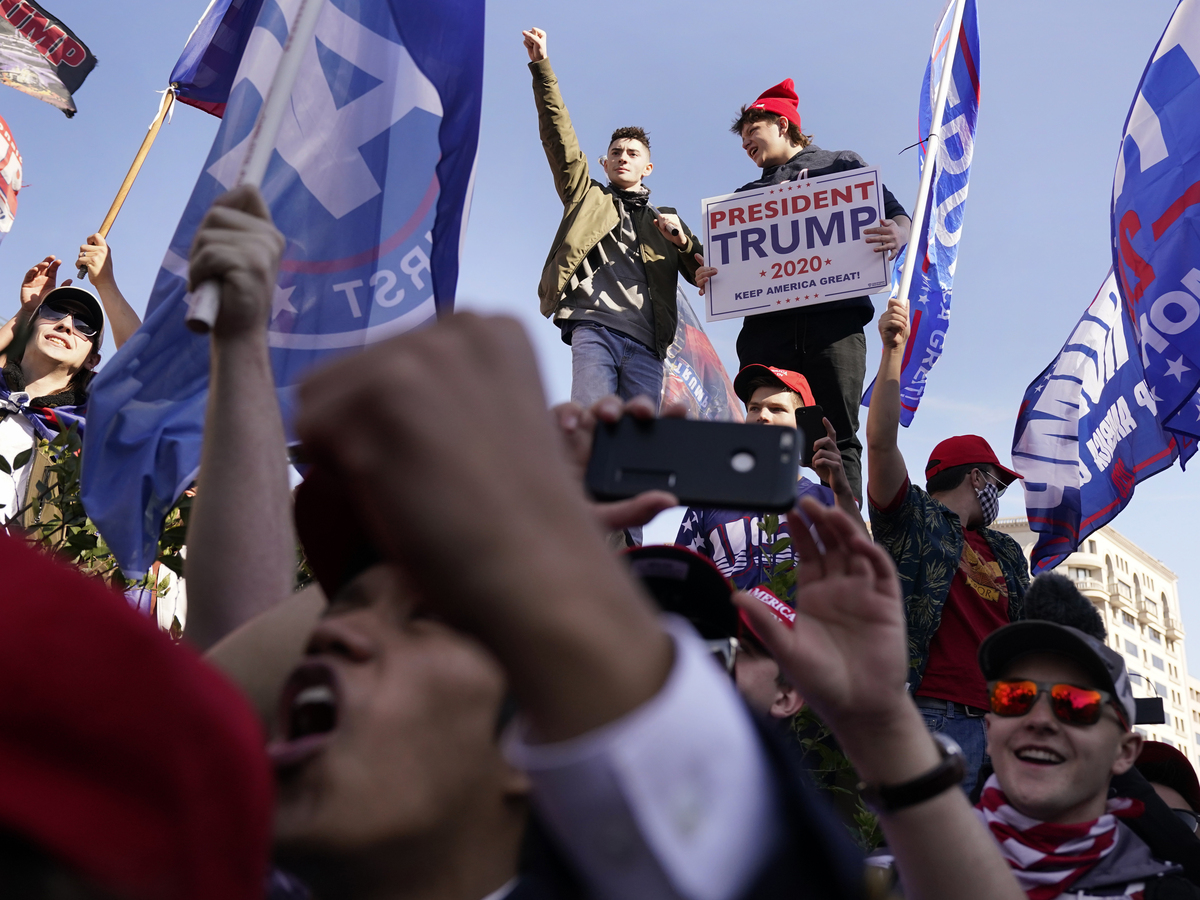 How many of President Trump's supporters swarmed into Washington, D.C., this weekend for the Million MAGA March? More than a million, as the White House says? Hundreds of thousands, as the president asserts? Maybe 10,000 or so, as local authorities estimate?

The answer: It doesn't matter.

The nation's political tribalism defies debate. Throngs of largely mask-free, conspiracy-immersed Americans turned the city's Freedom Plaza into an alternate reality on Saturday. Within that zone, there was no question that they numbered a million. Trump did not lose the election; it was stolen. Antifa is the nation's gravest threat. Socialism is lurking around the corner. The coronavirus pandemic is hype. Children are being trafficked by a cabal of global elites. And the nation's valiant, outnumbered police are under attack.

Parents bedecked in red, white and blue Trump paraphernalia said they brought their children to see a historic day, the day the patriots would "take back America." One man marched in Old Glory underpants and nothing else. A woman in a white Make America Great Again ballgown fielded selfie requests. An elderly marcher completed her crisp, preppy look with a hat inscribed with Q, for the mass delusion known as QAnon.

Dozens of Proud Boys, members of a violent gang of self-described Western chauvinists, knelt together in a somber prayer, then hopped around while chanting "F--- antifa!" Minutes into the march, their rowdy procession abruptly halted for a pit stop at a Walgreens.

The crowd was extraordinarily diverse for a right-wing event. Black, Latino, Asian and Middle Eastern fans of the president walked alongside white nationalists, boogaloo boys and marchers with Confederate flags. The route ran along a wall where someone had slapped a sticker over existing graffiti, turning "Black Lives Matter" into "Trump Lives Matter."

"Look around," said David North, who, along with his wife, Julie, drove all night from eastern Tennessee to attend. "Is this fringe?"

In a way, that's the question: Is "fringe" still accurate if debunked ideas are endorsed by 70 million voters?

Extremism analysts say the hastily organized attempt to gather the right under a single banner — for now it's "Stop the Steal" — is a chilling reminder of the Unite the Right rally in Charlottesville, Va., in 2017. They say the thousands who showed up Saturday represent countless others who followed via social media, donated to travel funds or watched from home — on Fox News, for those with a foot still in reality, on InfoWars-style channels, for the fully inculcated.

Brian Levin, a California-based hate and extremism researcher, called the Million MAGA March the debut of the pro-Trump insurgency, a preview of the "multiheaded Hydra" of far-right opposition expected when President-elect Joe Biden takes office.

Levin said the loyalists who showed up in Washington are only the public face. The bigger concern, he said, are the extremists "whose names we don't know yet," plotting in the shadows.

"Irrespective of the crowd," Levin said, "the fact that this is being organized shows that the hard, hard right is angling for some kind of activity to show that they have some potency."

This petri dish of conspiracy and extremism was at Trump's doorstep, so naturally he had to come say hello. Making good on a tease he tweeted the day before, Trump's motorcade snaked around Freedom Plaza in a surprise visit that thrilled his supporters.

Among the spectators was Patty Timmons, who'd flown in from Indiana on a last-minute impulse. She was just arriving at the plaza when she heard the ruckus over the motorcade.

"We ran out like, 'Oh, my gosh, it's President Trump!' We tried to run to see him, but we saw the whole parade of security and everything else that follows him," Timmons said. "But then he did a U-turn and he started coming around the other way and everybody was so excited. Because, really, they just love him. They genuinely love this president."

In her case, Timmons said, the affection for Trump developed gradually. He wasn't her pick in the Republican primaries, but she took a chance and voted for him in 2016.

"At first I thought it was a vanity project, to be honest. I thought, 'OK, well Trump's Trump. He's always been Trump,' " Timmons said. "But I really do think that, in the process, he fell in love with the cause and with the American people. And he's going to fight for us just like he said he would."

Timmons said she believes there was fraud in the election, but she also sees the writing on the wall: Biden is president-elect. She seemed to have come to Washington more for a farewell than a fight. She said she wanted to honor a president she sees as protecting her family's American dream, which began when her parents arrived from the Philippines in 1967 with four young daughters.

Today, Timmons said, she's an American businesswoman in charge of a successful company — an immigrant fairy tale, as long as you don't spoil the ending by pointing out that Trump's policies mean that her parents' journey might be far more difficult, if not impossible, today.

"There's some people who are absolutely ready to fight, really ready to lay down their lives for this president and what he's done," Timmons said. "And then there are those who just really want to thank him and show that we loved him and that we do love him."

The adulation was evident all over the plaza. Trump socks with little tufts of yellow fuzz for his signature coif. Trump masks, Trump racing suits, Trump jackets studded with rhinestones. The marchers held aloft huge Trump flags that fluttered in the cool breeze. "Four more years!" they chanted. Some chimed in with "Eight more years!"

With counterprotesters mostly confined to another area, there were few punctures to the bubble of Trumpworld. On one street corner, a lone woman in a Biden cap heckled the marchers as they walked by: "Bye, losers! Bye, old people without masks who deny science! Bye, racists! Bye, bye!"

The tensions worsened after nightfall, spiraling into brawls and the reported stabbing of a young man. Clusters of Black Lives Matter and antifascist activists massed in front of downtown hotels where they knew the Trump supporters were staying. The message was clear: Your rally is over and you're not welcome in these streets.

In each case, police officers formed cordons in front of the hotels, a human barrier between the warring sides. The cordon outside one of the hotels extended to an adjacent "gentlemen's club." As Trump supporters and black-clad antifascists screamed insults at one another, a few strippers from the club came outside for a smoke break and ended up twerking for the crowd. Because 2020 is nothing if not on the nose, at about that time a man on a bicycle rolled up with Jefferson Airplane's "White Rabbit" blasting from a speaker: When logic and proportion / Have fallen sloppy dead ...

The MAGA guys, some openly intoxicated, looked like angry bulls that were prevented by the police from charging. "Come at me!" they yelled from behind their cordons. The leftists, meanwhile, reveled in their home-court advantage, steps away from a White House that soon will be under new management, a reality that hadn't quite sunken in for the marchers.

"This is D.C., bitch!" one counterprotester taunted the penned-in MAGA crowd. "This is our city."