Accessibility links
Remote Workers Are Decamping To Small Cities During The Pandemic Employees' ability to work from home could transform small metro areas and change where Americans choose to live. 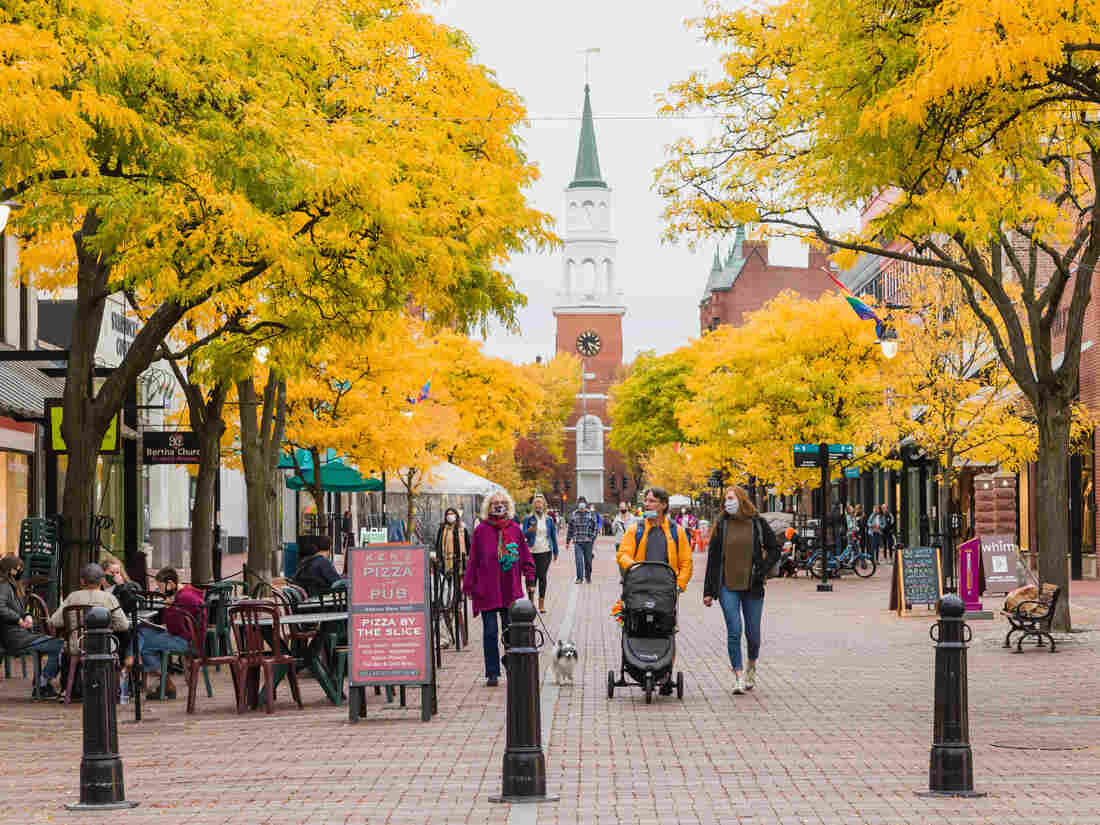 Church Street is a central shopping street in Burlington, Vt., where a pre-pandemic influx of remote workers is increasing as more people are working from home. Oliver Parini/The Hechinger Report hide caption 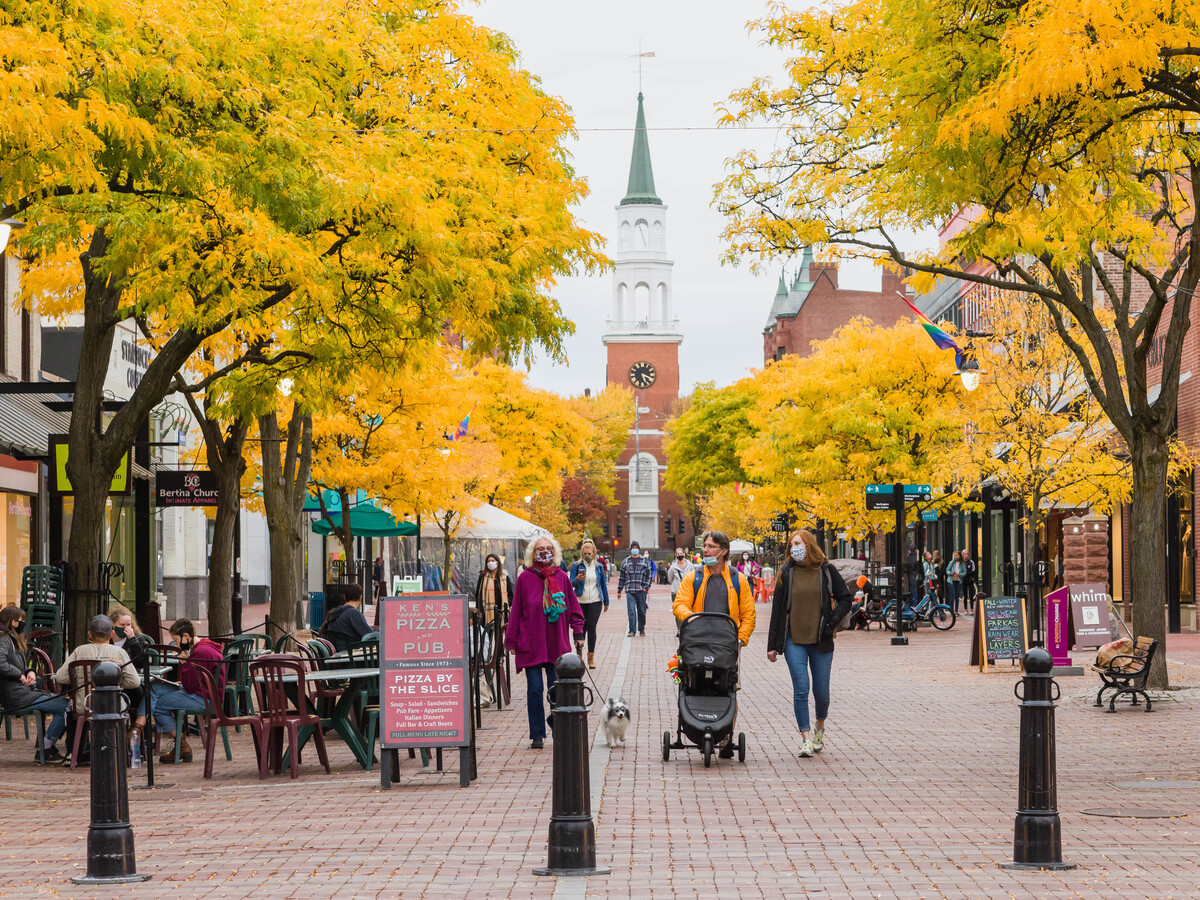 Church Street is a central shopping street in Burlington, Vt., where a pre-pandemic influx of remote workers is increasing as more people are working from home.

Rising from the eastern shore of Lake Champlain, just south of the Canadian border, this distant city looks like a quaint throwback, with Victorian-era architecture, church steeples and a main shopping street laid with brick.

But over the last few years, Burlington, Vt., has become home to an invisible economy of people who work remotely for the world's most cutting-edge technology businesses — and the pandemic has only increased the number decamping to this bucolic enclave.

Exactly how many Burlington residents work remotely for companies such as Apple, Google, Twitter and IBM "is hard to gauge because we all are sort of like hermit crabs in our own little shells and under our own little rocks," said Tyler Littwin, art director at the marketing software developer HubSpot. Littwin moved to Vermont from HubSpot's headquarters outside Boston and started telecommuting in 2013.

But there are so many, locals have a name for them. They call them "the remotes."

"Pre-pandemic, on a weekly basis, I'd be talking to somebody at a coffee shop and find out that somebody's husband or wife was also a remote worker," Littwin said. 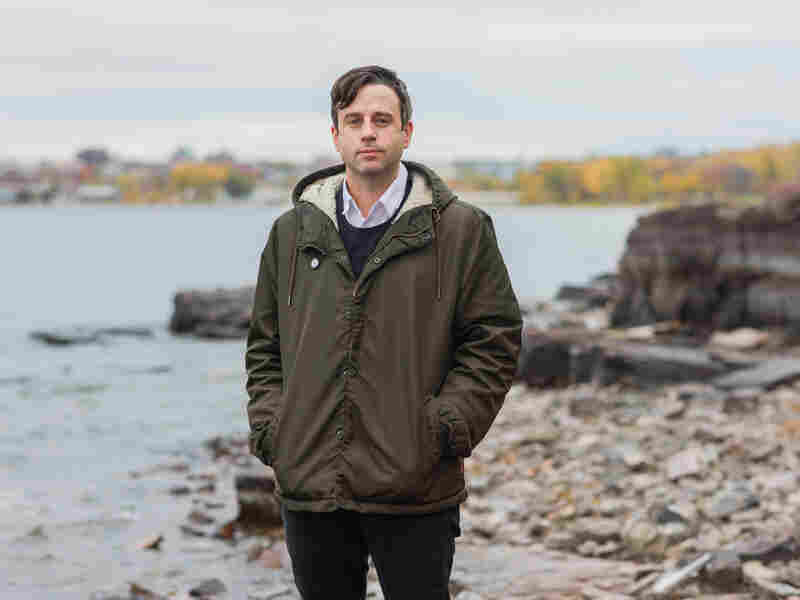 Tyler Littwin, art director at a Boston tech company, decamped to Burlington and has been working from there since 2013. Oliver Parini/The Hechinger Report hide caption 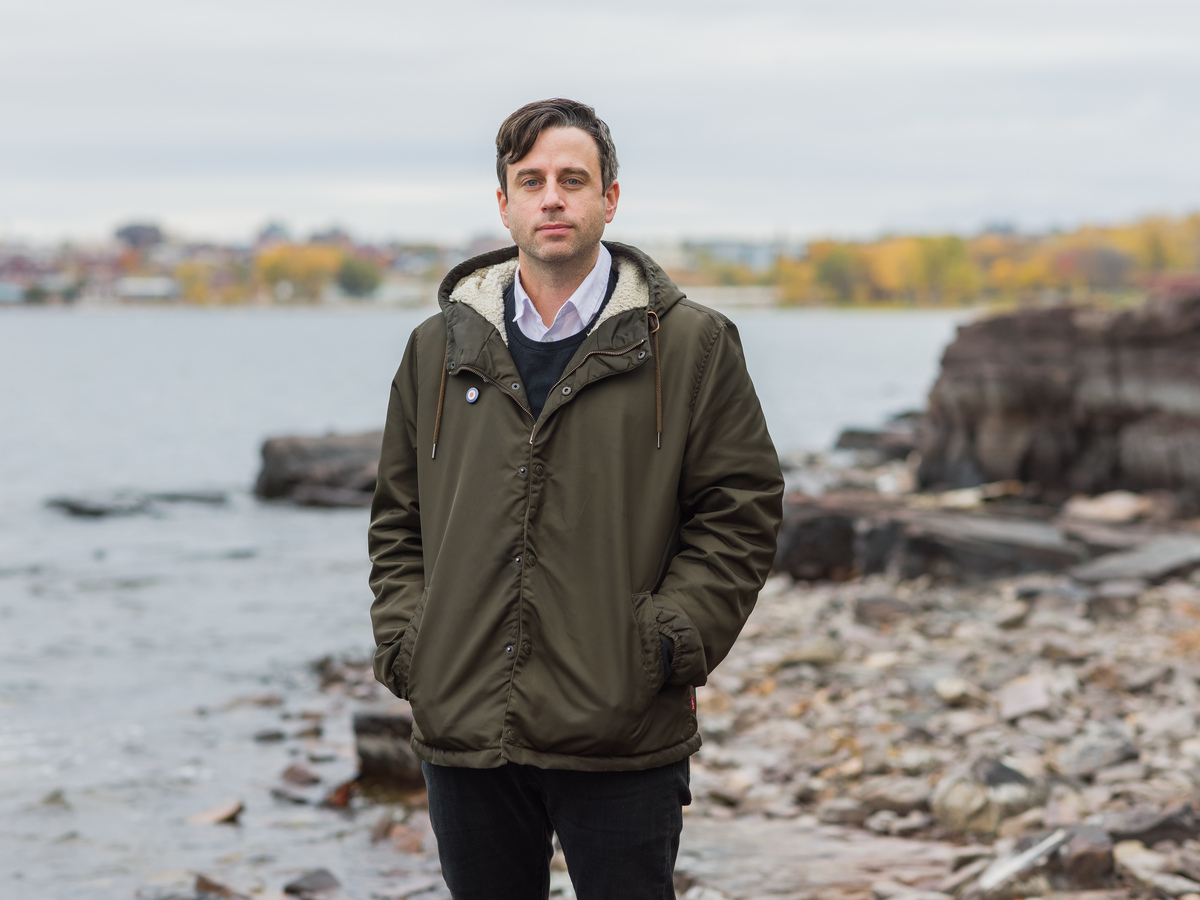 Tyler Littwin, art director at a Boston tech company, decamped to Burlington and has been working from there since 2013.

Since COVID-19 has allowed people to work hundreds or thousands of miles from their company's office, this trend appears to be speeding up dramatically. More young, well-paid and well-educated people are relocating permanently from big metro areas such as Seattle, San Francisco, Boston and New York to small cities such as Burlington, which has a population just under 43,000.

It's a shift that could revitalize these places, change the way many Americans choose where to live and widen the supply of workers for employers struggling to fill jobs in high-demand fields, even during a recession, according to policymakers and economists.

"What COVID has allowed is this whole awakening to remote work," said David Bradbury, president of the Vermont Center for Emerging Technologies. 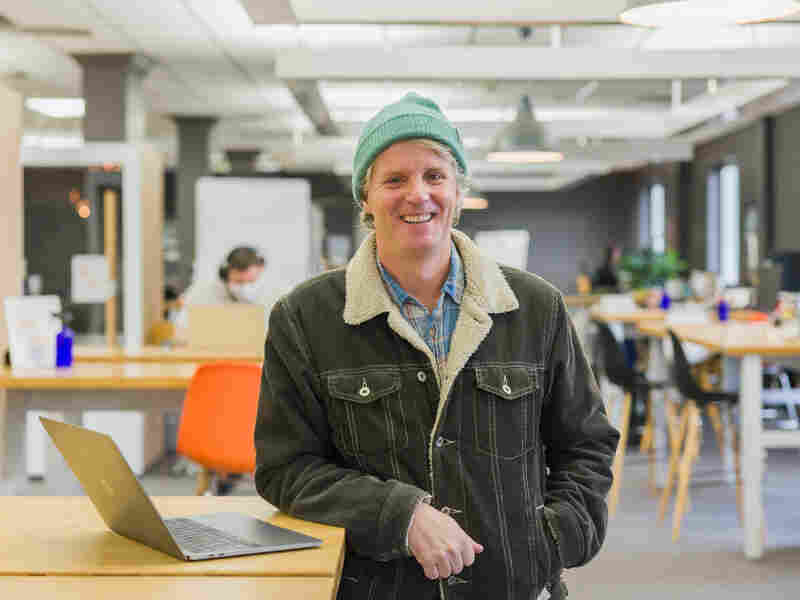 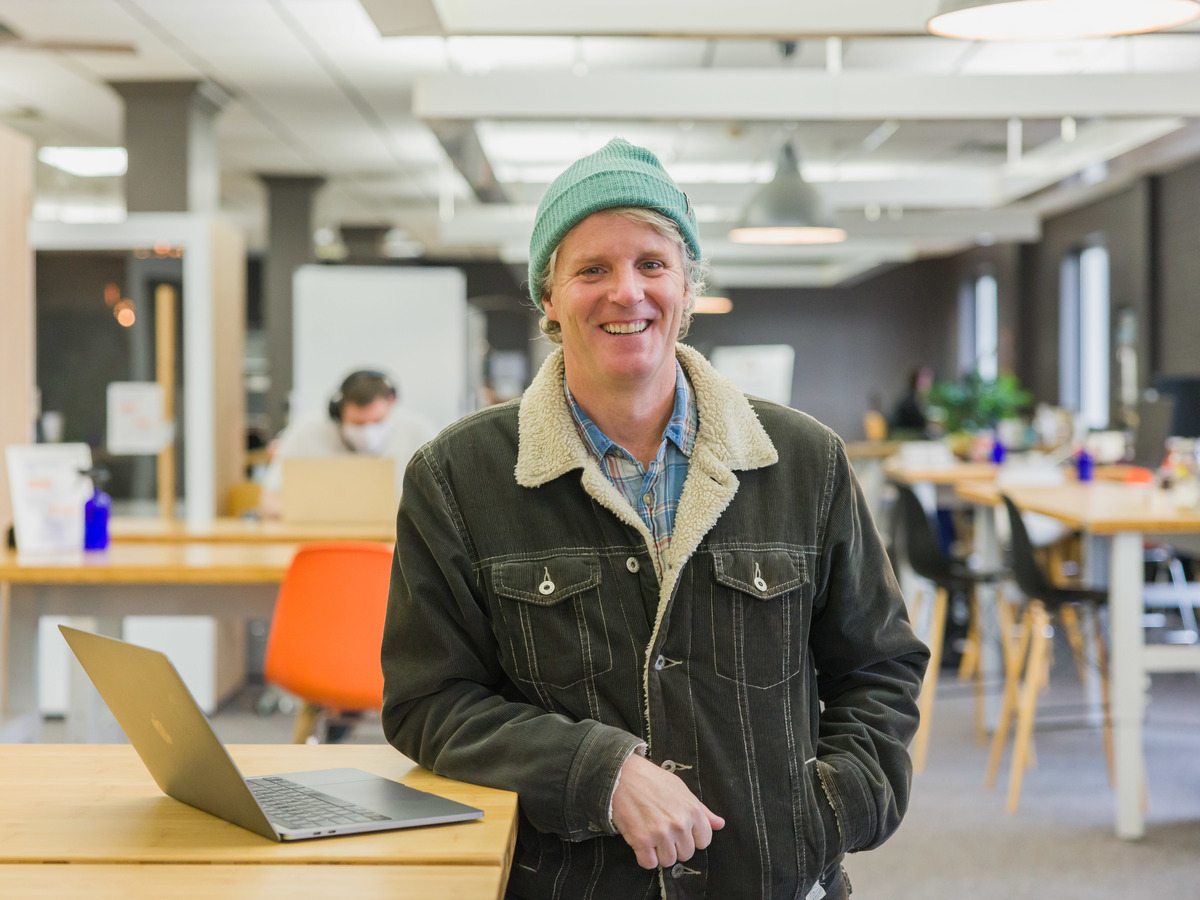 David Bradbury, president of the Vermont Center for Emerging Technologies, says the arrival of high-wage, remote workers is good for rural economies.

Among other activities, the organization runs a coworking space in an old Burlington telephone company building, where remote workers occasionally hang out. "It has been growing over time," Bradbury said, "and these trends have only accelerated under the pandemic."

The number of people who moved to Burlington in the spring from bigger cities was double what it was during the same period last year, according to the national real estate brokerage Redfin.

There's no way to predict if these migrants will set down permanent roots, although many have bought homes. But a third of those who moved to Vermont said they are likely or very likely to stay for good, according to a survey by the University of Vermont's Center for Research on Vermont and the Vermont Futures Project.

That works out to somewhere between 8,700 and 10,900 new Vermonters so far this year, the economics firm EPR projects. It's a big boost in a state whose population is just 623,989, making it the nation's second smallest (only Wyoming has fewer people) and second oldest (after Maine).

The most common reason workers say they are leaving places such as San Francisco, Seattle and Los Angeles is the escalating cost of housing, Redfin reports.

That sensitivity to housing prices is intensified by COVID-19 restrictions that have made residents question what they're getting for their money. Before COVID-19, "it wasn't a big enough trend for anyone to notice, but the pandemic has kind of poured gasoline on it," said Jason Tyszko, vice president of the Center for Education and Workforce at the U.S. Chamber of Commerce Foundation.

Sixty-six percent of professionals in technology, finance and other fields would now consider leaving San Francisco if they could permanently work from home, according to a survey by Blind, an online forum for people in those industries; 63% said they would leave Seattle and 69% that they would leave New York. 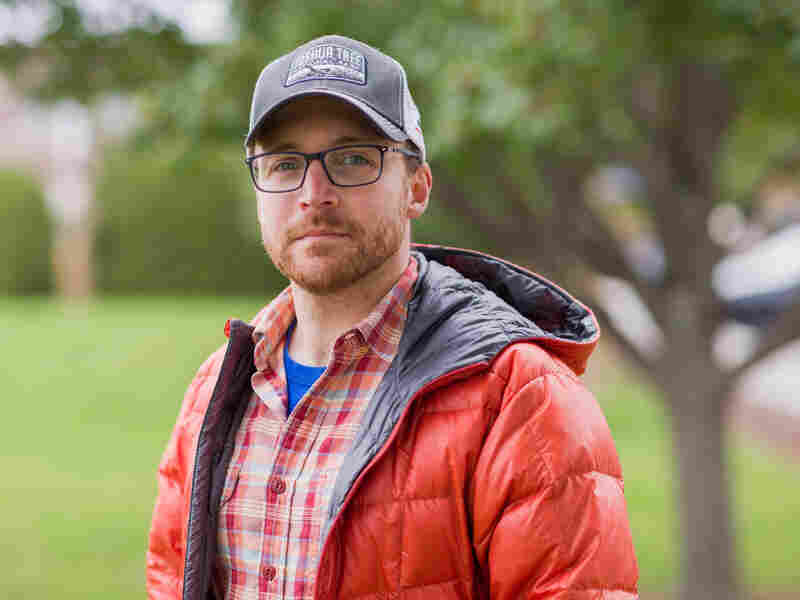 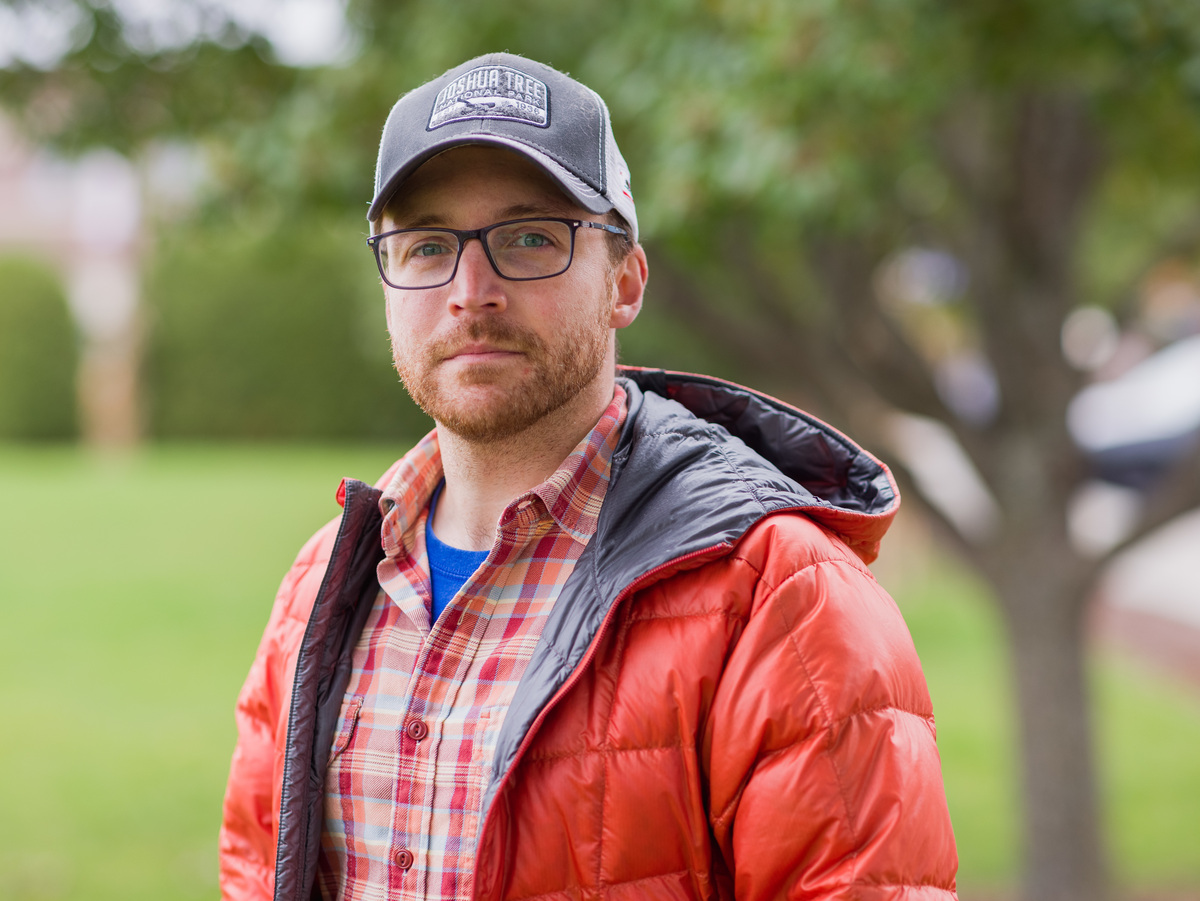 Dave Voutila, a sales engineer for the database management company Neo4j, moved to Burlington from Boston six years ago to work remotely. What recommends small cities, he and others said, is that they have lower prices and a more relaxed vibe, without sacrificing vibrant culture, decent restaurants and other conveniences.

On the down side, working from home can be isolating, though Burlington's remotes have their own Slack channel — membership has soared since March — and during pre-pandemic times had frequent in-person social gatherings.

From the cities' point of view, new arrivals with high pay can exacerbate income inequality and push up housing prices.

Already, in the fast-growing South Carolina remote-worker destination of Greenville, "the more desirable areas, the downtown, are now out of reach for the people who are from here," said Haro Setian, CEO of the Haro Group, a real estate brokerage there.

On the other hand, these cities' average age often declines and their level of education rises as the newcomers settle in.

"You're basically bringing skilled workers into your city who are otherwise very difficult to get," said Bill Fox, director of the Boyd Center for Business and Economic Research at the University of Tennessee, Knoxville, another city benefiting from the relocations.

If remote work continues to expand at this pace, it also could help businesses cast a wider net for employees they say they've been having trouble finding. Technology companies in particular struggle to attract enough qualified applicants in the cities where they're based.

"It theoretically widens the pool in a way that can benefit companies because they can access a greater pool of talent," said Tyszko of the U.S. Chamber of Commerce Foundation.

It also gives in-demand workers leverage they are already using.

"I kind of gave my company an ultimatum and said, 'I'm moving here and I'd like to take my job with me,' " Voutila said. "And they let me."

Recruiters are increasingly listing remote work on employment websites. The number of information technology postings employers specify can be done remotely is up 58% so far this year compared with the same period last year, according to the Computing Technology Industry Association.

"Many people who were doubters before are now learning," said Dan York, director of Web strategy and project leader for the Virginia-based Internet Society. He has done that job remotely from Burlington since 2018. "And so I think that has also opened it up that you can find the people, find the talent, wherever they may be. And they may be here in Vermont."