Accessibility links
Gridlock Leads To Executive Orders In The Name Of Religious Freedom Legislative remedies prove ineffective in reconciling religious freedom claims with concerns about discrimination, so the battle is waged via executive orders. 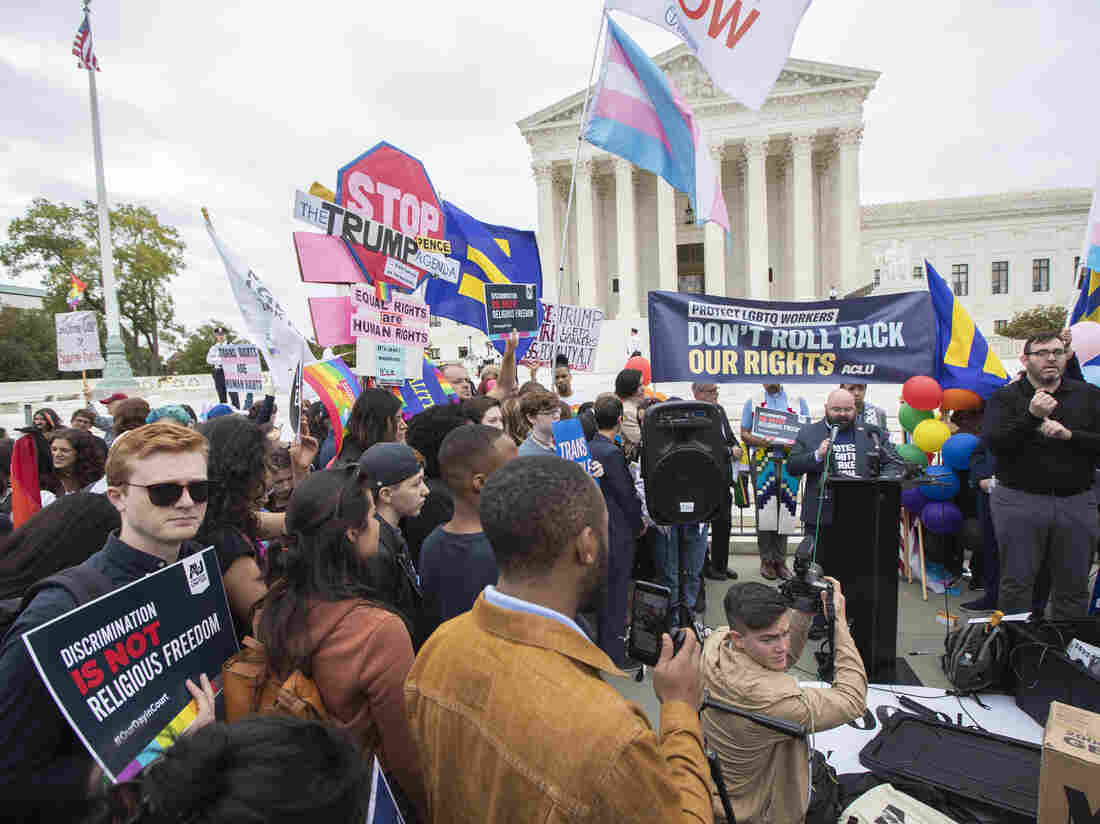 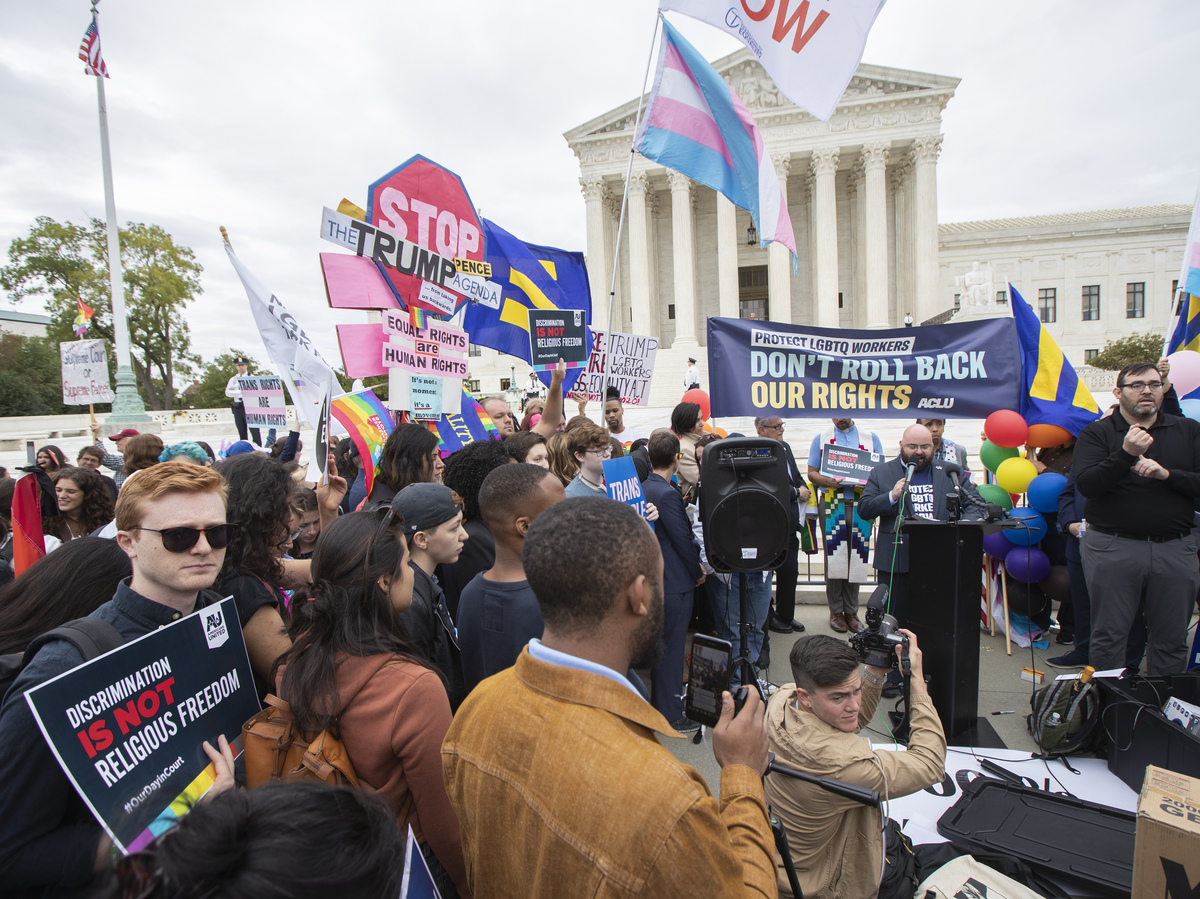 Key government policies on religious freedom and discrimination, once set through legislation, are increasingly dictated by presidential orders, meaning they shift capriciously from one administration to the next.

In 2014, advocates for LGBTQ rights cheered when President Barack Obama unilaterally issued an executive order prohibiting federal contractors from discriminating in their hiring practices on the basis of sexual orientation or gender identity.

Four years later, the Trump administration weakened that order with a unilateral move directing that contractors facing a discrimination claim under Obama's order should be entitled to a "religious exemption."

What's At Stake For LGBTQ Voters This Election?

What's At Stake For LGBTQ Voters This Election?

The Labor Department then proposed a rule that would give the directive the force of law and permit faith-based contractors to give hiring preference to individuals with particular religious beliefs, such as an opposition to same-sex unions or transgender identities.

That time, it was conservatives who were pleased.

Such back-and-forth executive orders are now set to continue under President-elect Joe Biden, who has promised to reverse President Trump's hiring directives.

Behind the dueling orders is a deep disagreement over the meaning of the First Amendment guarantee of religious freedom. Conservatives say the right to "free exercise" of religion means people and organizations should be able to act on their religious objections to abortion, same-sex marriage, or accommodation policies for transgender individuals.

Others say the First Amendment's prohibition against the "establishment" of a religion means that religion-based arguments should not be used to justify discrimination or the denial of civil rights or basic human services.

Such conflicts in the past have been resolved through legislative remedies. Congress passed the landmark Civil Rights Act in 1964 and the Religious Freedom Restoration Act in 1993. Both measures had bipartisan support, but that consensus has since broken down.

"Health care and nondiscrimination became so partisan," says Holly Hollman, general counsel at the Baptist Joint Committee for Religious Liberty. "We've kind of lost our shared definition and commitment to religious liberty in ways that make it harder to legislate."

The prospect of a divided government in 2021, with Joe Biden in the White House and possibly a Republican-led Senate, means that consensus around religious freedom issues may continue to be elusive.

"Given the gridlock, we're going to see more unilateral action from the executive branch, whether it be regulatory action or executive orders," says Ryan Anderson, a research fellow at the Heritage Foundation who writes often on religious freedom issues.

Following his 2014 order barring discriminatory hiring practices by federal contractors, Obama issued guidance in 2016 that required schools to protect transgender students from harassment and to accommodate their identities with respect to pronouns and bathrooms.

That guidance, however, was rescinded shortly after Trump was inaugurated, when his administration told school districts that the relevant policies were more properly established by state and local authorities.

Three months later, Trump issued a sweeping order "promoting free speech and religious liberty." The order called for weaker enforcement of the Johnson Amendment, which bars tax-exempt religious groups from endorsing political candidates. It also instructed government agencies to consider new regulations to address "conscience-based objections" to the provision of certain health care services, and it directed the attorney general to issue guidance to all federal agencies on what religious liberty protections require.

Among the agencies responding quickly to the order was the Department of Health and Human Services (HHS), where a conservative activist, Roger Severino, was put in charge of a "conscience and religious freedom division" under that department's Office for Civil Rights, which Severino directs.

"Every agency has a civil rights office in the federal government," Severino noted last month in a video presentation. "Not every agency, until now, had a religious freedom office. And now we do."

Over the course of his term in office, Trump has taken a variety of unilateral steps to promote a conservative view of religious freedom, many of which a Biden administration might be inclined to reverse.

The American Civil Liberties Union and Americans United for Separation of Church and State (AU) have both issued detailed lists of the executive actions they expect to see Biden take in the area of religious freedom, perhaps beginning with a broad order similar to the one Trump issued.

"We would like to see the Biden administration sign an executive order to restore and protect religious freedom for all Americans," says Rachel Laser, the AU president, "and make clear that religious freedom should operate as a shield to protect us and not as a sword to license discrimination."

Some of Trump's executive actions will be easier than others to reverse. The directive to weaken enforcement of the Johnson Amendment could be countered simply by mandating strengthened enforcement. Other issues could be settled through the courts.

An HHS-issued "conscience rule" that would allow health care workers to refuse to provide medical services that conflict with their moral and religious beliefs has faced several court challenges and is now on appeal before the U.S. Court of Appeals for the 2nd Circuit. Laser says a Biden administration could simply decline to defend the rule.

"We would expect that the Biden administration would not carry forward with any type of appeal," Laser says. "[That] would cut that off at the knees."

Some of Trump's directives would be vigorously defended by outside groups, however, particularly where they concern sexuality and marriage.

"There are a variety of religious traditions that hold viewpoints on this question," says Ryan Anderson of the Heritage Foundation. "Orthodox Jews, Roman Catholics, evangelicals, Latter-day Saints, Muslims and various people who accept the Genesis creation story are going to have strong convictions about male and female."

Under President-elect Biden, Anderson says, "The government might be asking us to violate those convictions. If we're going to be pluralistic, how do we navigate those disagreements?"

Even if a Biden administration manages to undo some of the government directives that reflected conservative interpretations of religious freedom principles, other groups could go to court with similar claims, using the same arguments.

"The undoing would give rise to legal challenges," warns Louise Melling, the deputy legal director at the ACLU.

Such challenges are likely to get a more favorable hearing, given the installation of more conservative judges in federal courts across the country and a newly powerful conservative majority on the U.S. Supreme Court.

"The court is clearly in the midst of reconceiving some of our religion statutes and the constitution, I think," Melling says.

With that prospect, battles over religious freedom are likely to continue, no matter the presidential administration.

In an earlier version of the Web story, the last name of Rachel Laser was misspelled as Lazer.