Accessibility links
Street Fentanyl Surges In Western U.S., Leading To Thousands Of Deaths New research shows the use of the deadly synthetic opioid fentanyl spreading fast in Los Angeles, Phoenix and Seattle. Chinese companies are routing the street drug through cartels in Mexico. 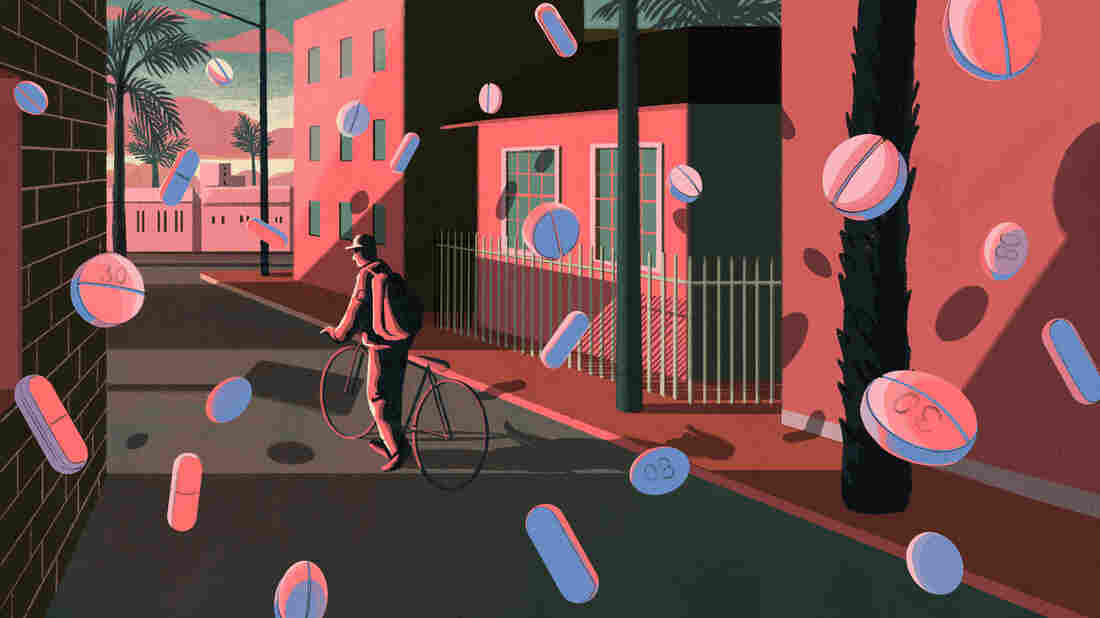 Researchers point to a devastating new development: Fentanyl is making swift inroads in the western U.S., where it used to be rare. Cornelia Li for NPR hide caption 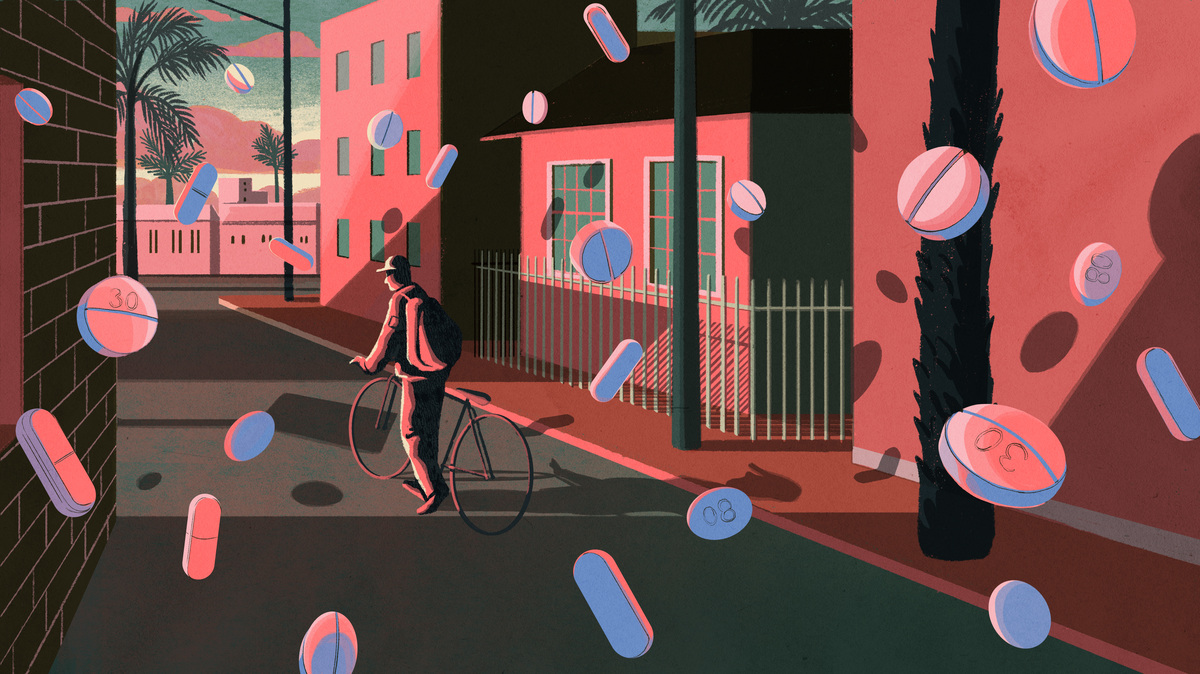 Researchers point to a devastating new development: Fentanyl is making swift inroads in the western U.S., where it used to be rare.

Seven months ago, when Jake got out of jail in Phoenix, he expected to go back to using his drug of choice: heroin. But the street market for illegal opioids had changed.

"I just started smoking [fentanyl] pills because that was the thing that was around; it was so easy to get," he said. NPR is only using Jake's first name because he fears being arrested after talking openly about his addiction.

"Soon as I wake up, I have to have a pill," Jake said. "The high is not very long, so 20 minutes after I smoke a pill, I want to smoke another one, you know?"

He lives on the street and occasionally sleeps in motels. He has been addicted to opioids — first heroin and now street fentanyl — for six years.

Several times a day, he crushes an illegally manufactured fentanyl pill on a piece of tin foil, then cooks the powder with a flame, sucking in the fumes.

A History Of Fentanyl

A History Of Fentanyl

Recently, Jake pushed his bike along a tree-lined street, heading to buy his next dose for $5 or $10 a pill.

"I can walk through the motel and have at least three or four people tell me they got pills for sale," he said.

Much of the fentanyl reaching American street markets is still coming from mainland China, despite restrictions imposed by the Chinese government last year.

Working with new data collected by the Center for Advanced Defense Studies, an organization that receives funding from the U.S. government, NPR found Chinese companies have found ways to circumvent export bans.

'We Are Shipping To The U.S.': Inside China's Online Synthetic Drug Networks

Firms are marketing chemicals needed to make fentanyl on social media and working with drug cartels in Mexico.

Researchers also point to another devastating new development: Fentanyl is making swift inroads in the western U.S. where it used to be rare.

"It's killing too many people"

"Up through 2018, the vast majority of synthetic opioid overdoses occurred east of the Mississippi River," said Chelsea Shover, an epidemiologist at Stanford University.

People addicted to opioids in western states often use a different kind of heroin that doesn't mix easily with fentanyl powder. But while studying overdose deaths last year, Shover and other researchers found what they describe as a "fentanyl breakthrough" in the West.

The data showed fentanyl had begun killing far more people in cities such as Los Angeles, Seattle and Phoenix, including people with addiction who didn't know their drugs were contaminated.

The spike in fentanyl deaths in the West contributed to a record number of fatal overdoses last year, with roughly 72,000 Americans dead.

"It's just getting worse, and it's killing too many people," said Matthew Donahue, deputy chief of operations for the Drug Enforcement Administration.

It's Donahue's job to coordinate the international fight against smugglers bringing fentanyl into the U.S. He thinks there's a reason fentanyl is surging in the West.

Last year, responding to pressure from the Trump administration, the Chinese government cracked down on direct shipments of fentanyl to American buyers.

"They're sending precursor chemicals directly to cartels in Mexico to produce the fentanyl along with the fentanyl in pills," Donahue said.

Once they got into the fentanyl trade, Mexican cartels used their existing drug routes and street markets in Western cities to push the new product. Their motives are simple: Fentanyl is deadly, but it's also cheap and easy to make and ship. It's also highly addictive, making it far more profitable than heroin or cocaine.

In Phoenix, the DEA and local police have made a series of massive fentanyl busts over the past year, seizing hundreds of thousands of pills.

But Sergio Armendariz, a street outreach worker with a program called the Phoenix Rescue Mission, says that hasn't done much to dent supply.

Homeless may be most vulnerable

"It's huge over there. Everyone's talking about the fentanyl on the street. When I come up to camps, you see the foils," he said.

His group and others are scrambling to adopt public health measures already widespread in Eastern cities.

That means educating people living with addiction that fentanyl is different, and more toxic, and handing out Narcan kits that can revive those suffering overdoses.

They're also distributing fentanyl test strips, so more people might avoid tainted drugs. But Armendariz says fentanyl is already so entrenched in Phoenix that many people deliberately seek it out.

"Knowing that it's very powerful? That's a driving force for people who are looking for that extreme high," he said.

Jake described his cravings for fentanyl as far worse than those he experienced with heroin. "It's just the high I really think about," he said.

He has already overdosed once on fentanyl but was revived. His fear of the sickness that comes with withdrawal soon had him searching out more pills.

"I think I'm careful enough, but I've had plenty of friends who've died who thought the same thing, so, I don't know," Jake said.

The DEA's Matt Donahue acknowledged street fentanyl is still flowing in large quantities into more parts of the U.S., but without interdiction efforts now underway far more people suffering addiction would be vulnerable.

"We get this statement all the time that we're losing the drug war," Donahue said. "What we're trying to do right is try to have China and Mexico control those four chemicals needed to produce fentanyl. It's not a perfect system but this is a global epidemic."

Data released last month by the Centers for Disease Control and Prevention suggest drug overdose deaths spiking to record levels again in the first months of 2020, with fentanyl largely to blame.