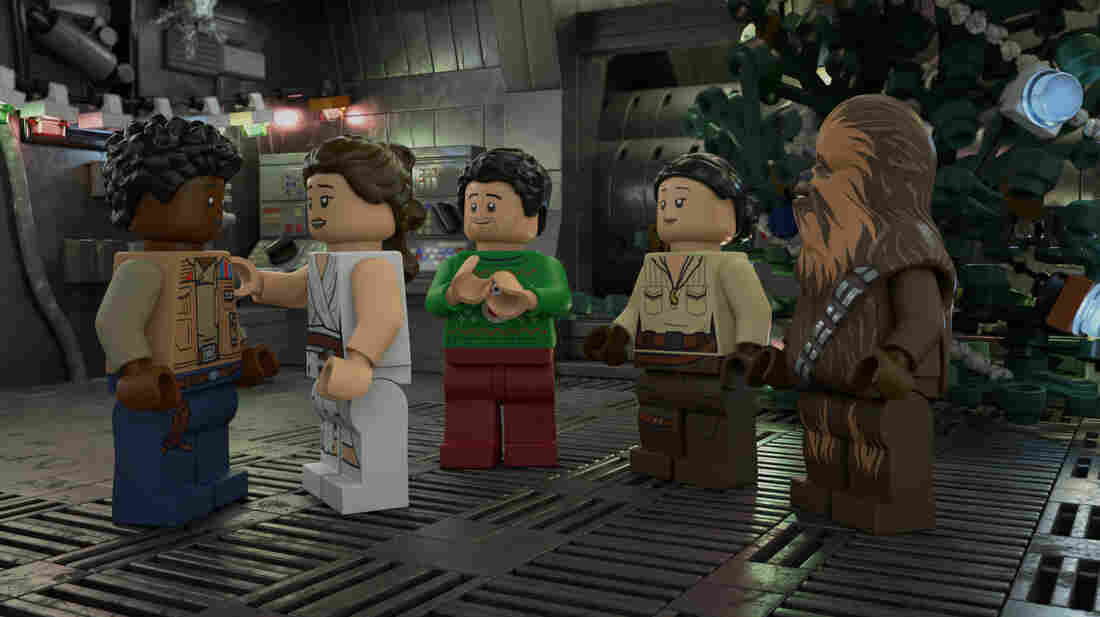 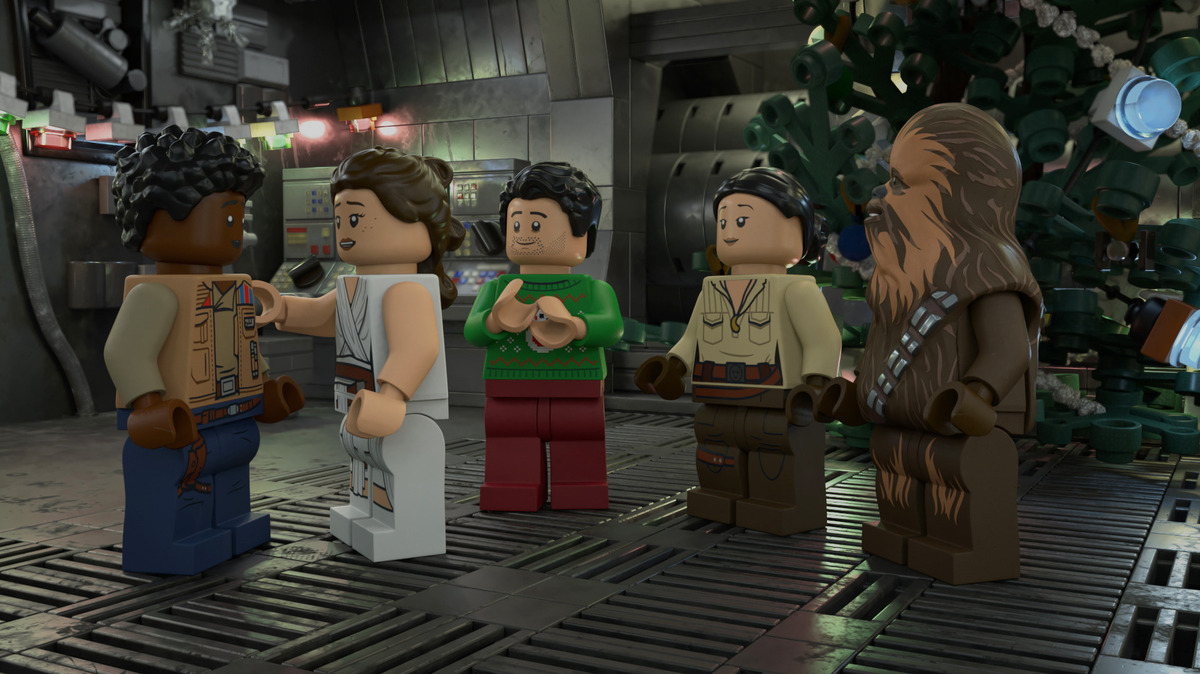 Before we chew over the new LEGO Star Wars Holiday Special, reader, it behooves us to embrace the historical perspective. We must cite precedent, examine trend lines, peruse the vicissitudes of causation. For only then may we place it in its rightful cultural context.

There, I said it: It is impossible to properly understand and meaningfully appreciate Disney Plus' latest foray into the Star Wars universe of intellectual property — a holiday special which consists of computer-animated, extruded-plastic versions of the franchise's major and minor characters coming to understand the true meaning of friendship, togetherness, joy, the whole Hallmark Channel schmear — without first peeling the big, stinky space-onion that came before it.

That's right: Let's talk Korman, you and I.

Length: Two hours. No, seriously: Two. Hours. So apart from its various and sundry other grievous sins, it pre-empted episodes of both The Incredible Hulk and Wonder Woman. Imagine. The unmitigated gall.

What It Was: A cynical cash-grab, for one thing. For another: A holiday special featuring the main stars of the film Star Wars and ... just ... so much else. So much else.

Like What?: "Like what," you ask. Oh, you sweet summer child. Like a lengthy interlude featuring a troupe of holographic acrobats performing a routine that's 20 percent Cirque du Soleil, 20 percent Studio 54 and 60 percent the very concept of cocaine. Like Diahann Carroll in a spangly outfit, floating in space as she breathily seduces a pervy old Wookiee through the magic of song. Like Art Carney delivering lines like "I'll just insert this here proton pack." Like Jefferson Starship, randomly. Like Harvey Korman in drag as a four-armed alien hosting a cooking show. Like Harvey Korman as a malfunctioning robot attempting to explain how to assemble electronic equipment. Like Harvey Korman as a lovestruck cantina bar patron who drinks liquor via an opening at the top of his head. Like-

Ok Ok I Get The Idea: Oh, you may think you do. I guarantee that you do not.

Stars: Mark Hamill, Carrie Fisher and Harrison Ford show up, briefly, having not read the fine print on their contracts. Hamill and Fisher perform with gusto — Fisher even sings a song, passably enough. Ford performs with whatever the opposite of gusto is.

Plot: Hoo boy. Where to begin. Chewbacca wants to get to his home planet (Kashyyyk, canonically, but an Imperial officer calls it "Kazook," here, because if the Empire is about anything, it's about that casual racism). His family is celebrating Life Day, the Wookiee celebration of hope and peace and what have you. We learn that Chewie lives in a bad matte painting of a treehouse with his wife Malla, his father Itchy and his son Lumpy (no word if he's got cousins named, like, Scaly, Rashy and Irregularmoley, but we can extrapolate from the evidence presented.)

We also learn that Chewie's house has a brown, suburban-key-party-chic vibe (there's even a space-Barcalounger plopped in the center of the conversation pit). He communicates with others across the vast empty void of space via a Commodore PET that the set dresser couldn't be bothered to snazz up, even a little. (In fact, all of the electronic equipment in the special has a very 1970s burnt-ochre Texas Instruments feel.)

Imperial troops invade Chewie's house and search it, Art Carney outsmarts them (!) and Chewie returns home. Then all the characters sort of float (I know) and walk across space (I know) into a star (don't think about it) and gather to watch Princess Leia totally co-opt a Wookiee holiday by making it all about her and singing a Life Day song. The End.

Why Have I Never Heard Of This?: Because you ... have other things going on in your life, presumably? But the real reason, of course, is that the special was immediately disavowed by George Lucas and his people (who were working on The Empire Strikes Back at the time, and had outsourced the writing and production of the special to CBS).

(Bruce Vilanch was a co-writer of this thing, by the way. A fact that seems surprising at first and then, suddenly, completely and irrevocably not.)

(If I were to tell you that another writer credited was named Mitzie Welch — and I am, I am telling you that — your reaction to the fact that someone named Mitzie was partly responsible would probably go something like, "No, yeah, I kinda figured that, somehow.")

So, even though George Lucas and Co. ordered that it never be broadcast again, and, further, that it be completely wiped from the Jedi Archives like some kind of cheese-tastic variety-show Kamino, bootleg copies circulated at cons, and inevitably migrated online, as is the way of such things.

Come On, It Can't Be That Bad: It can be, and it is. Except ... Well. Okay. If you can hold out for an hour and fifteen minutes, you'll come to an oasis of a sketch in which Bea Arthur (you heard me) gets a musical number. She plays the proprietor of the Mos Eisley cantina, and slows the familiar Cantina Band Song way, way down, transforming it into a tune that manages to be at once a German beerhall oompah ditty and a torch song. Seriously, she does that. Because when you hire Bea Arthur, you hire a pro who can commit to the bit, even when the bit in question is this ingloriously shambolic, and yet emerge somehow unscathed.

Okay. We have sufficiently immersed ourselves in the dank backwaters of the disavowed past. You'll want to take a quick shower to get the stink off you. But in the meantime: Onward.

Length: 44 minutes! We'll come back to this!

What It Is: Pretty good, is what. I mean, it's pure fan-service and little more than that, but at the end of the day? I'm a fan, and I'm fine with getting serviced, now and again.

It's trying to be a lot of things at once, admittedly: On the most basic level it's a straight-up, full-throated holiday special for families, with messages about coming together to celebrate friendship, love, togetherness — the whole schmoopy Hallmark schmear, really.

But it's also a story that takes characters from the final Star Wars film trilogy and sends them hopping through pretty much every climactic moment of the Skywalker Saga ... and beyond. And it does so while gently satirizing the franchise, in much the same way the many LEGO Star Wars games do. It even includes references to the 1978 Star Wars Holiday Special, which, as I trust I have amply illustrated, was a fiasco, stuffed inside a debacle, wrapped in the guy who voiced The Great Gazoo.

Stars: Within the reality of the special, LEGO versions of Rey, Finn, Poe, Rose, Chewie, Lando, R2-D2 and C-3PO. In our reality, however, the only actors reprising their film roles are Billy Dee Williams, Kelly Marie Tran and (wait for it) Anthony Daniels, who never turns down a gig, and bless him for it. The other characters are voiced by talented sound-alike voice-actors.

Plot: Rey is training Finn to be a Jedi, while everyone else is preparing a Life Day party aboard the Millennium Falcon. Rey experiences a crisis of confidence in her mentorship abilities and leaves with BB-8 to uncover an artifact that can send her hurtling through time, so as to study other mentor-student relationships across the franchise.

If that seems to you like just a flimsy excuse to have Rey meet characters from every Star Wars movie and their spin-offs, pour yourself a blue milk.

The Main Thing About It, Though: It's pure fan service, yes, but what's weird is that it's attempting to service very different sets of fans.

Star Wars fandom isn't monolithic, after all. Some fans of the original films despise the Abrams-Johnson-Abrams final trilogy, and all of its characters. Foregrounding Rey as much as this special does will likely turn those fans off, and once they see how centrally she now figures in, say, one of the most memorable moments in A New Hope, well. That'll send them straight to Reddit.

Make no mistake: The fact that it's all so clearly a joke, a goof, a clever meta-gag in a holiday special for kiddies — that won't matter to these fans. They'll be incensed, and they'll stew, because when this particular subset of fandom is angry is when they feel most themselves.

Me? I belong to the cohort of fans who like the final trilogy just fine, thank you very much. I would have liked it better if The Rise of Skywalker hadn't dropped so many threads introduced in The Last Jedi, so imagine my surprise when The LEGO Star Wars Holiday Special, of all things, started picking them up again.

Case in point: Kelly Marie Tran's Rose. The fact that she gets more lines of dialogue in this silly thing than she did in the entirety of The Rise of Skywalker is ... well, it's sad, frankly, but I'll take it, because you know why? More Rose.

Ditto Rey training Finn — a notion that the films only feinted at, but that here drives the entire plot.

Some elements unique to the special also work nicely. Its version of Emperor Palpatine, for example, gets the best lines, and his persona is less that of the universe's greatest and most terrible incarnation of elemental evil, and more that of a vain, insecure, manipulative bully — the ultimate bad boss. Which tracks.

How Are The Jokes?: Good question. They're solid, mostly. Not nearly as on point and just plain weird as they were in those first couple Lord and Miller theatrical films, though admittedly that's a high bar.

In terms of the Hit Rate of these jokes and Easter eggs (Life Day eggs, I suppose), I'd put this lower than The LEGO Movie but a notch or two above The LEGO Ninjago Movie. You know? Right in there.

That impression is certainly bolstered by the fact that The LEGO Star Wars Holiday Special knows not to overstay its welcome. In and out, 44 minutes. Faster than the attack run on the Death Star, and more or less as successful.

Though would it have killed them to throw us one last bone?