Accessibility links
Why White Evangelical Voters Love Donald Trump : Code Switch One of the biggest storylines from the 2020 presidential race has ... well, race at the center of it. If you paid attention to the stories about exit polling, you heard a lot of talk about how Latinx and Black voters showed up in bigger numbers this year than back in 2016. But on this week's episode, we also focus on a conversation that's not happening: The one about a group whose support for Donald Trump hasn't wavered. We're talking about the white vote, and in particular, white evangelical voters. 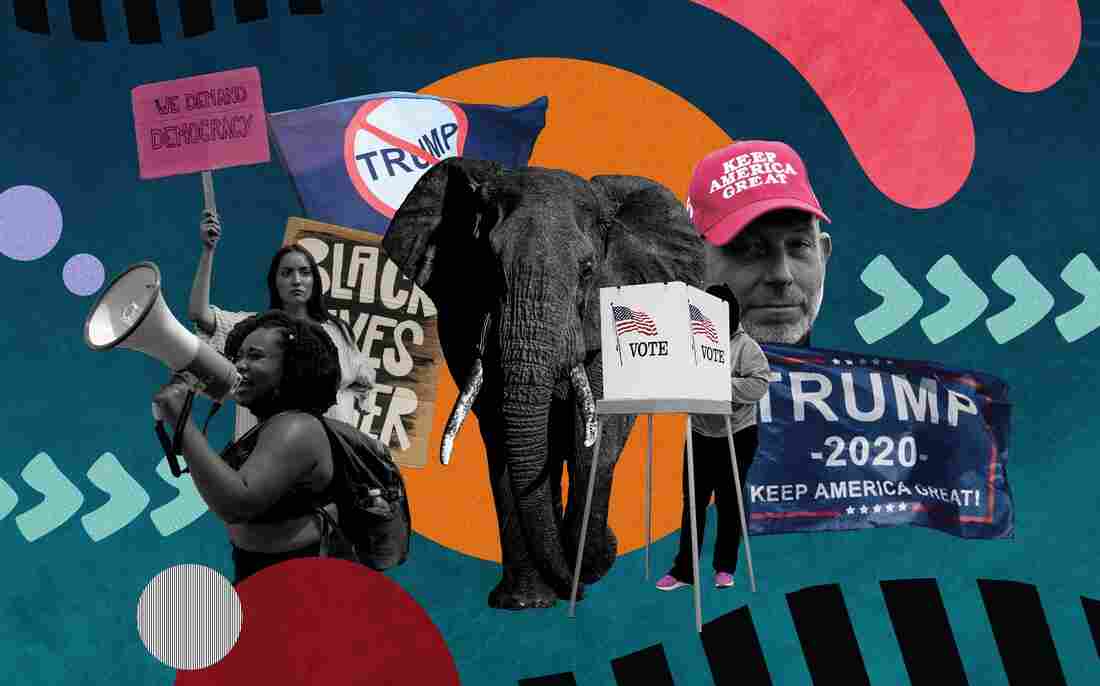 a photo collage of anti- and pro-Trump voters, with an elephant in the middle Tanganyika Zinzani for NPR hide caption 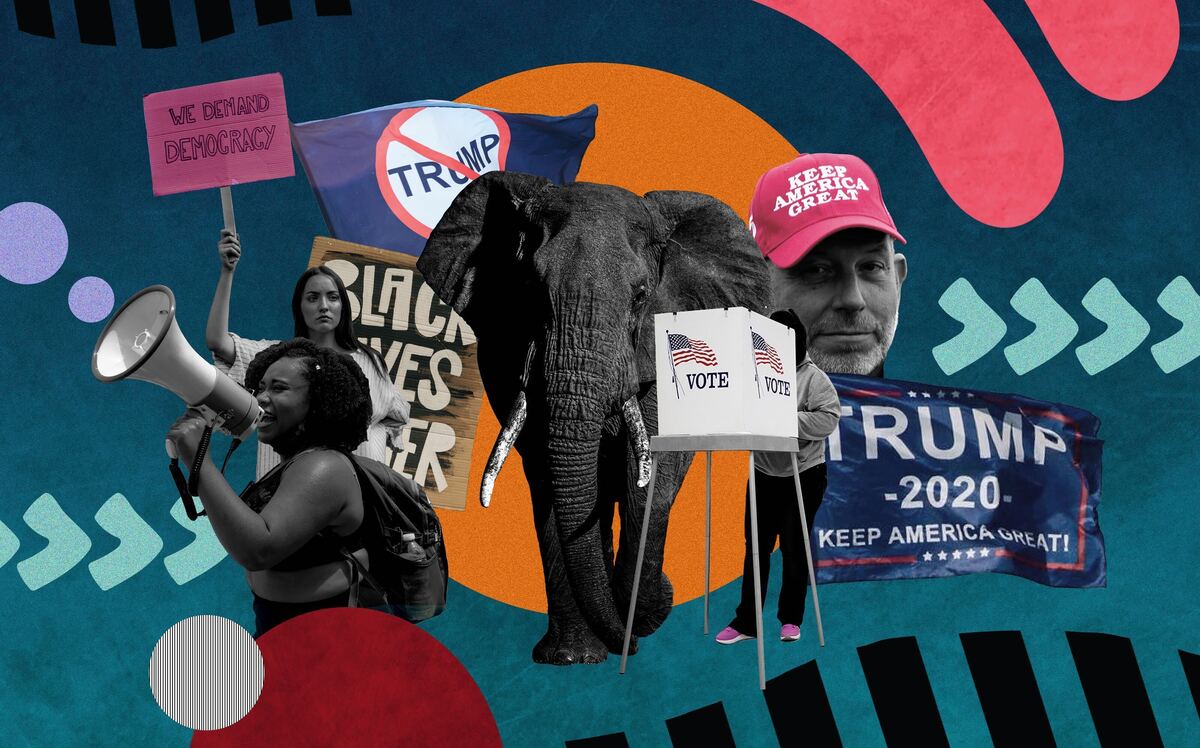 a photo collage of anti- and pro-Trump voters, with an elephant in the middle

One of the biggest storylines from the 2020 presidential race has ... well, race at the center of it. If you paid attention to the stories about exit polling, you heard a lot of talk about how Latinx and Black voters showed up in bigger numbers this year than back in 2016. But on this week's episode, we also focus on a conversation that's not happening: The one about a group whose support for Donald Trump hasn't wavered. We're talking about the white vote, and in particular, white evangelical voters.

Trump's support is overwhelmingly white, but no one goes harder for him than the white voters who have been the beating heart of the conservative movement for decades. No matter what happened over the last four years — Charlottesville, 'sh*thole countries," the disastrous handling of the coronavirus pandemic — about 80 percent of white evangelicals consistently approved of President Trump's performance.

While their numbers have dwindled from 21 to 15% of the U.S. population, white evangelicals are a force to be reckoned with in politics, says Robert P. Jones, the author of White Too Long: The Legacy of White Supremacy in American Christianity and the CEO of the Public Religion Research Institute. They make up a little over a third of Republicans, Jones says, and have an outsized impact on elections, making up about a quarter of voters. That's right—15% of Americans account for around 25% of those who turn out to vote.

We talked to Jones about the power of this voting bloc, and what that means for the national discussion around race in this country. Our conversation has been condensed and edited for clarity.

You said that the number of white evangelicals dropped from 21 to 15%. What's happening there? Is that just attrition, people growing old and dying, or people no longer identifying as evangelical?

It's a mix of those things. It's more decline than would be accounted for than just simply generational replacement; there are lower birth rates, and so there are more people dying than are being born. So there is that dynamic. But what's really turbocharged the drop in the last decade has been younger people leaving the group. So one of the other things we're seeing is that, as [the group] is shrinking, it's also becoming older. The median age has been ticking up; the median age now is in the high 50s in this group, and only around one in 10 are under the age of 30.

How different are white evangelicals from white voters in general? Do they have regional bases? How educated are they compared with white voters more broadly?

They are older, and they tend to be concentrated more in the South and the Midwest. So they're more populous in those states.

But notably, if you talked to [a white evangelical person] a generation or two ago, they would have been less likely to have a college education than Americans as a whole. But there's actually been a decent amount of upward mobility in this group.

And in fact, it's actually tied to the lower birth rates; one of the things that has led to lower birth rates is more evangelical women getting college degrees, wanting a career and spacing out having kids. So we're actually [finding] now that they're roughly comparable to the country as a whole in terms of the number of who have four year college degrees.

In some of the recent polling data that you found before the election, eight in 10 white evangelicals said that they would vote for Trump. Given Trump's very particular biography and demeanor, his appeal among white evangelicals is confusing for a lot of us who are not part of that world. So why have they embraced him so enthusiastically?

I think I've probably spent more time answering this question over the last four years than maybe any other question in my career. It is perplexing. And the reason it is perplexing is that this group has defined itself as so-called values voters, right. That's the internal history there. But there are two things here.They have supported Republican candidates, no matter who they were, going all the way back to Reagan. So [their support for Trump] is not atypical. Now, it was notable that [white evangelical support of Trump] reached 81 percent in the exit polls in 2016, which was even higher than what George W. Bush got. And he was kind of one of their own, who himself identified as evangelical.

Trump's appeal among this group really was a cultural appeal. It was really the "Make America Great Again" mantra. I think most of the power of that slogan was in the last word: again. It was hearkening back to a kind of 1950s America, where white Christians and particularly white Anglo-Saxon Protestants were more dominant in the society demographically and culturally. That's also obviously before Brown v. Board of Education, desegregation and the civil rights movement. And it really had that power. I even started calling them nostalgia voters in the 2016 election cycle, because it was that backward pull that was really the real attraction.

In 2016, the question [about evangelicals] was: How could you vote for someone who's been divorced and remarried multiple times, who talked about sort of sexually assaulting women, who paid off a porn star? I think the more relevant question for 2020 is: How could white evangelicals continue to support a candidate who has openly refused to call out white supremacist groups, who has said derogatory things around immigrants? Now, we've had four years of this: the denial of systemic racism, criticizing protesters and what can only be called really racist rhetoric. And I think the answer to that is that it's actually part of the worldview that white evangelicals still hold. And so those kinds of appeals actually weren't repellant; they were actually part of the attraction of Trump to white evangelicals.

It's interesting. There are only modest age differences here, and the differences there do tend to be more along educational lines. Those with a four-year college degree tend to be more able, I think, to see these patterns of systemic racism. And in our survey, what we asked was: Do you think that the recent killing of African-Americans by police is part of a pattern of how police treat African-Americans? Or do you think they were isolated incidents?

And what we find is, overall, 7 in 10 white evangelicals say that these are just isolated incidents. They're the only religious group with that level of kind of denial of systemic racism in policing. They're also the only religious group that has not moved over the last five years. That's worth saying as well: Other white Christian groups, like white Catholics and mainline Protestants for example, have moved 10 percentage points on this question. They're much more likely to see this as part of a pattern and something that needs to be addressed, whereas white evangelicals remain as dug-in and really unmoved by five years of protest, by five years of more police shootings and police killings.

The other thing to say is it's [somewhat about] education, but the biggest driver is partisanship. The 20% of evangelicals that identify as Democrats are by far the ones who are more likely to see this systemic racism.

Given this generational attrition, what does that mean for the power of white evangelicals going forward?

We'll need a long horizon to see it. But there's no doubt that the group is shrinking and aging, and that only means one thing for the future. There's only so long it can really continue to hold up that kind of influence, just because the numbers simply won't be there in that way.

If you look at the two political parties today, a third of the Republican Party is white evangelical. But if you add in the other white Christian groups, it's about two thirds white and Christian. If you add in white Catholics and white mainline Protestants, the Democratic Party is only about one third white and Christian. And if you map those on to the generational cohorts, it means that the Republican Party, in terms of its racial and religious composition, looks something like 70-year-old America. And the Democratic Party in terms of the racial and religious composition, looks about like 30-year-old America.

And so, you know, if you're thinking from a partisan lens or from a religious lens, this is not a long term recipe for power, really. I think sooner or later, there will have to be more of a political reckoning to rethink this trajectory in the Republican Party. Unfortunately, I think it's going to take decisive losses at the national level that are probably of a magnitude bigger than the ones we've just seen, for that message to really sink in.