Accessibility links
Giuliani-Led Trump Effort To Stop Pennsylvania Certification Fails The campaign suffered a major loss for its flailing effort to overturn the election results. Action by the Pennsylvania Supreme Court on Tuesday followed a string of other defeats. 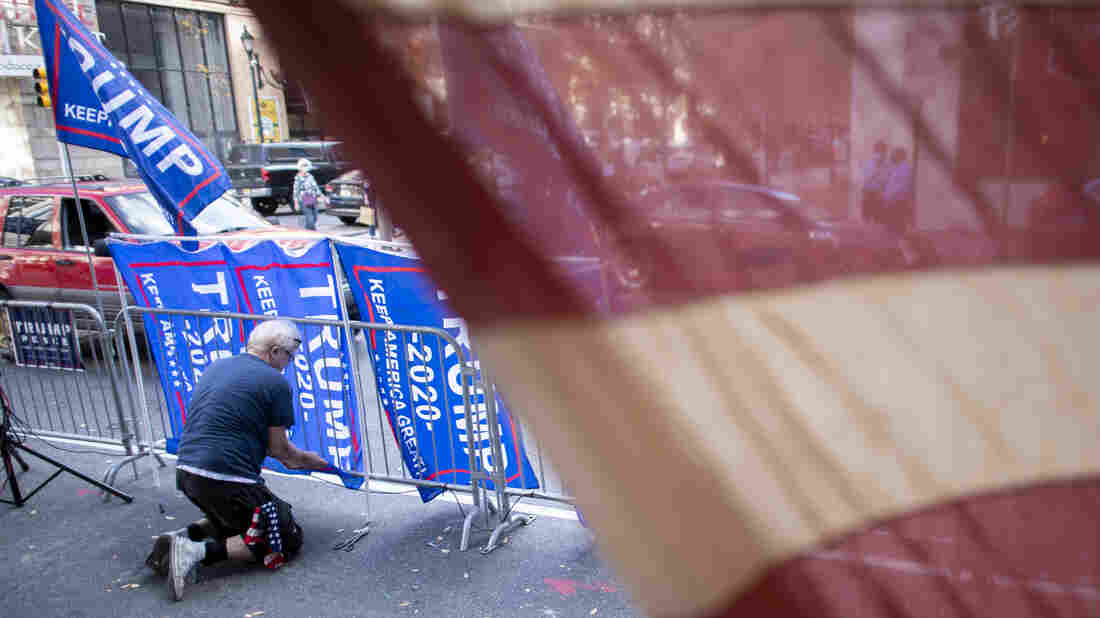 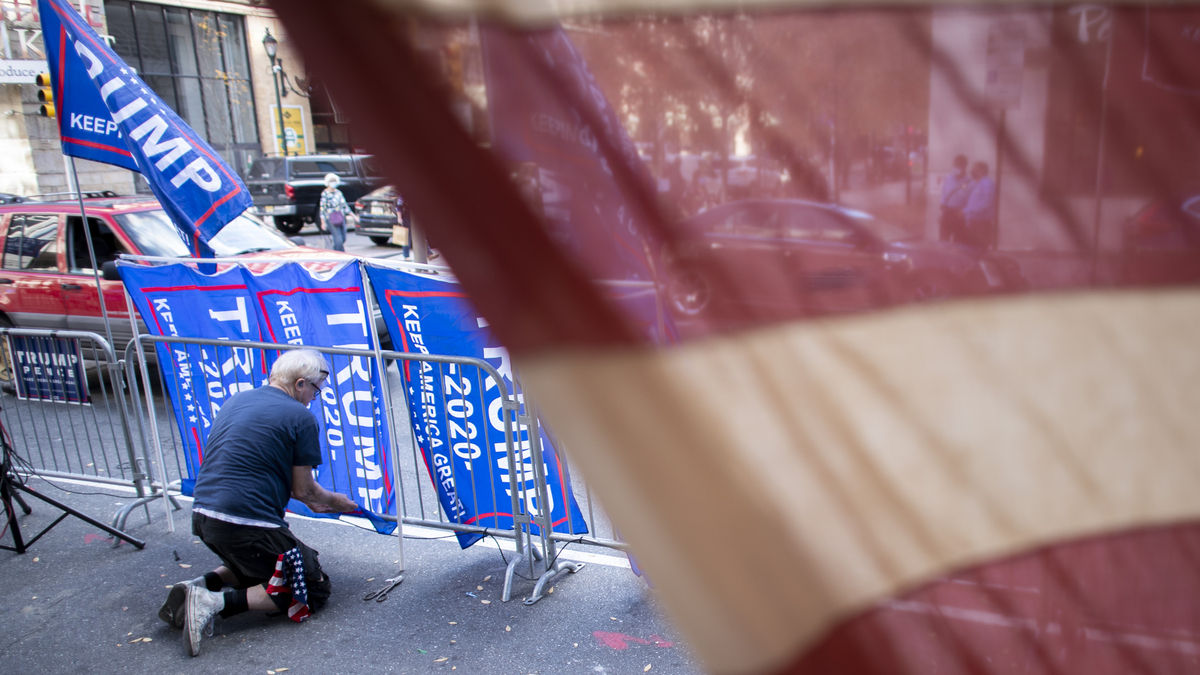 Things did not go well Tuesday for the Trump campaign's effort to stop certification of the Pennsylvania vote count — which has Joe Biden ahead by more than 73,000 votes.

At almost the same time that the president's lawyer, Rudy Giuliani, was in federal court in Williamsport, Pa., complaining that Republican observers were illegally denied access to vote counting in Philadelphia and other Democratic areas, the state Supreme Court in Harrisburg concluded otherwise. By a 5-2 vote, it ruled that Philadelphia election officials had acted properly in their handling of the observation process.

The Trump campaign had argued that GOP representatives were kept too far away to see whether there were any irregularities, but the court said they were able to view election workers "performing their duties," as required.

It was a major loss for the president and his campaign's flailing effort to overturn the election results. Republicans have filed suits in several states seeking to invalidate thousands of votes, but have lost almost every case so far.

While the election observer claim was removed from the Pennsylvania lawsuit, Giuliani told U.S. District Court Judge Matthew Brann that he hoped to reinsert it with an amended complaint.

Giuliani argued that lack of access for GOP observers in Democratic-leaning Allegheny and Philadelphia counties should invalidate some 700,000 mail-in ballots. "As far as we're concerned, those ballots could be from Mickey Mouse," he said.

The Trump campaign also claimed that Pennsylvania election officials had violated the Equal Protection Clause of the Constitution because some Democratic-leaning counties allowed voters to cure, or fix, mistakes on their mail-in ballots, while other mostly Republican-leaning counties did not.

Lawyers for Pennsylvania's election officials, who asked the court to dismiss the Trump case, argued that simply because some counties allowed their voters to fix mail-in ballot errors, other Pennsylvania voters were not denied the right to vote, as the Trump campaign insisted.

Mark Aronchick, an attorney for some counties sued by the Trump campaign, called Giuliani's demand that legal ballots be tossed out "disgraceful."

The president's lawyer also alleged, without providing any evidence, that voting in Pennsylvania was riddled with fraud. He said it was "not an isolated case" either, but part of "widespread national voter fraud" involving other jurisdictions, including Detroit and Milwaukee. However, Giuliani later admitted to the judge that the Pennsylvania lawsuit was "not a fraud case."

The judge gave the parties several days to file additional briefs and motions before he makes a decision on whether to dismiss the case.

Giuliani was a last-minute addition to the legal team after several other attorneys withdrew from the case, which was filed on Nov. 9. An initial team of lawyers, from the Columbus, Ohio, firm Porter Wright, withdrew last week. They were replaced by another team, including two lawyers from Texas who asked to be removed on Monday, saying they had "reached a mutual agreement that Plaintiffs would be best served" if they withdrew from the case.

It was a sign of the chaos surrounding the Trump campaign's legal effort, which even some of the president's supporters have concluded is futile.

On Monday, another new lawyer was added to the Pennsylvania case — Marc Scaringi, a conservative radio talk show host in Pennsylvania and one-time Senate candidate.

Scaringi, who made no comments during Tuesday's hearing, was an unusual choice. Even though he is a strong Trump supporter, Scaringi dismissed the chances of a successful legal challenge during his radio show on Nov. 7, the day news networks called the race for Joe Biden.

"In my opinion there really are no bombshells that are about to drop that will derail a Biden presidency, including these lawsuits," he said, adding, "At the end of the day, the litigation will not work. It will not reverse this election."

The action in Pennsylvania followed a string of losses for Republicans. Four cases challenging the vote in Pennsylvania, Michigan, Georgia and Wisconsin were withdrawn by the conservative voting integrity group True the Vote on Monday without explanation.

A Michigan appeals court on Monday also upheld a lower court ruling allowing Wayne County, home of Detroit, to certify the election results. Republicans tried to invalidate the vote, arguing that it was marred by fraud, an argument the lower court judge dismissed as "not credible." The Trump supporters are appealing to the state Supreme Court. And on Tuesday, the county board of canvassers deadlocked along party lines, 2-2, on whether to certify the results, which would have pushed the decision up to the state canvassing board. The board later reversed course and certified the results.

Several legal experts said this week that they see no way at this point for Republicans to change the outcome of the election.

"There is no path," University of California, Irvine law professor Rick Hasen wrote on his blog Monday. "Rudy Giuliani can say what he wants and the president can keep declaring that he's won, but there's no plausible legal way this election gets overturned. We are not talking three Hail Marys anymore. We are talking done."

At one point in the Pennsylvania hearing, as he was introducing evidence, Giuliani noted that he had once been a law clerk and he hoped he was handling the evidence correctly — "in case I need a job after this," he told the court.