Accessibility links
Trump Hasn't Conceded Georgia. Neither Did Stacey Abrams. What Changed? The president's questioning of the election process isn't the first time Georgia voters have heard that. State officials say claims about impropriety — past and present — are false. 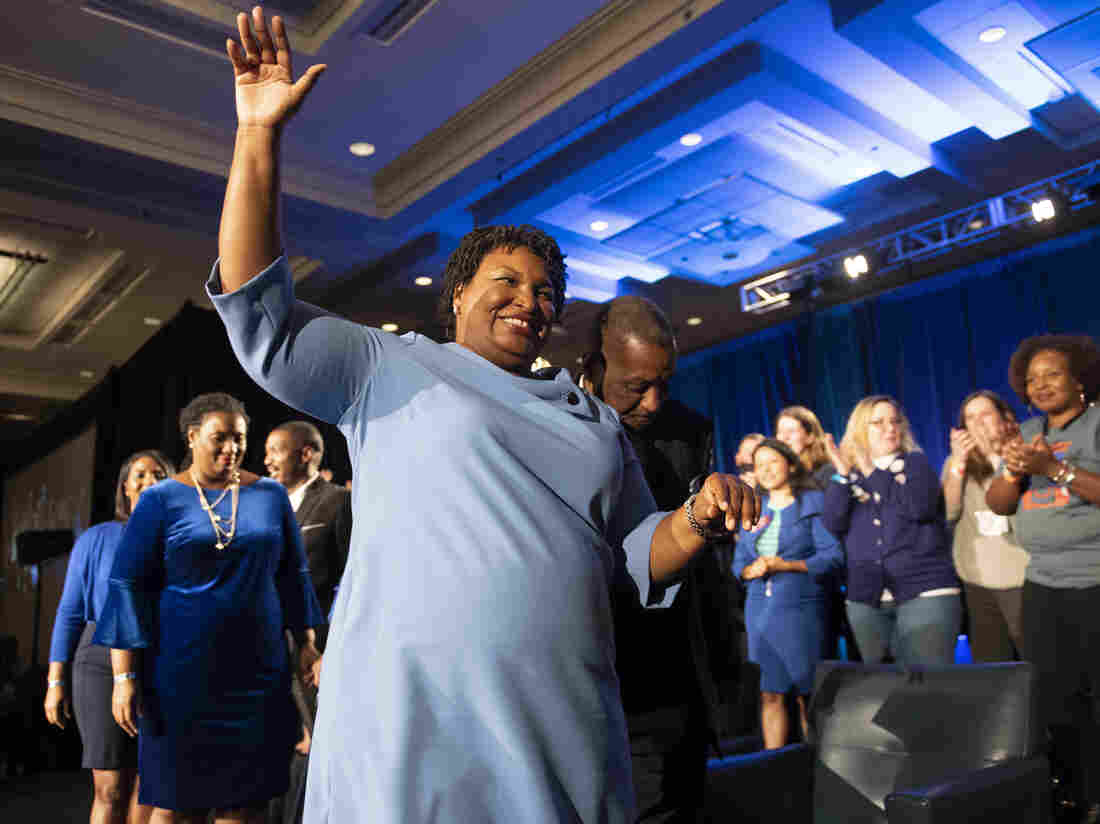 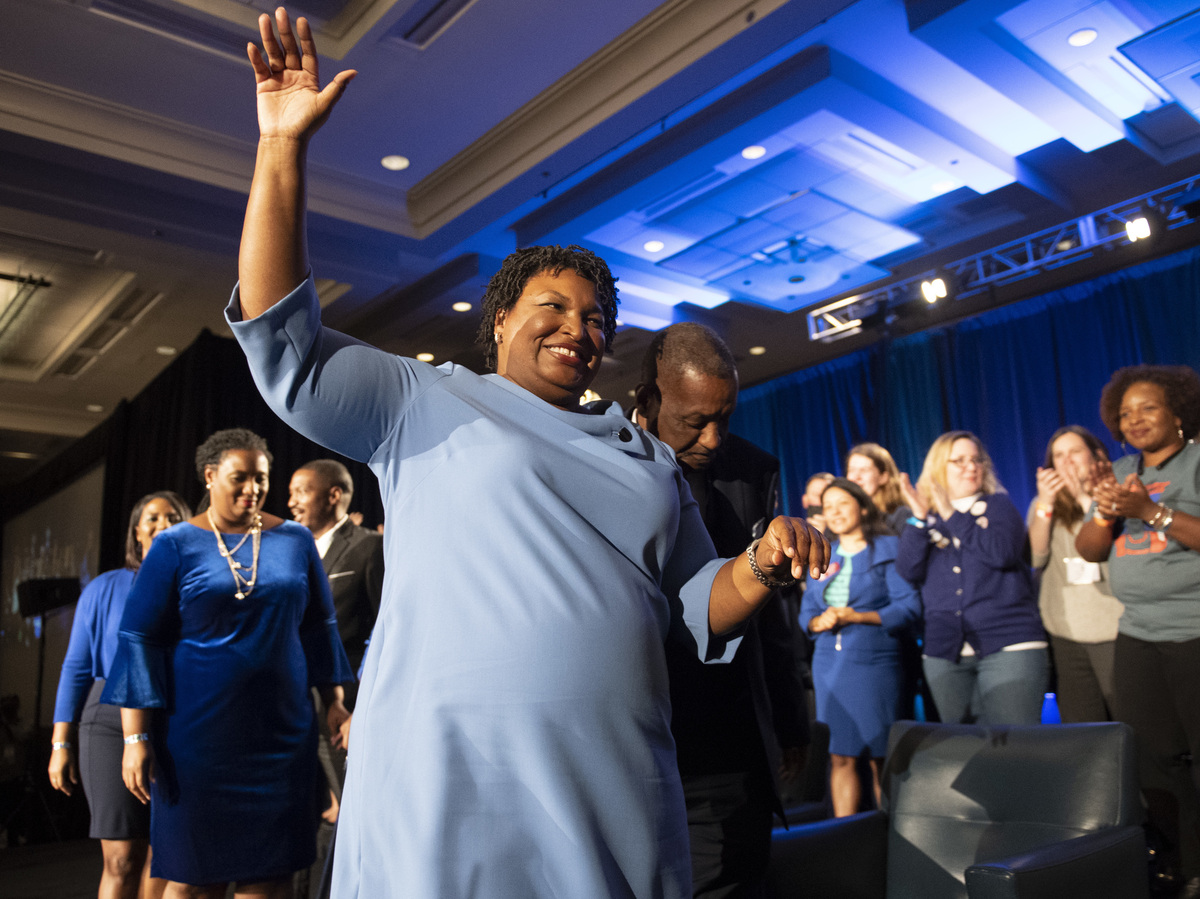 Georgia Democratic gubernatorial candidate Stacey Abrams left the stage after addressing supporters during an election night watch party in 2018. She accepted her loss but never conceded.

Georgia elections officials have until midnight Wednesday to wrap up an unprecedented hand recount of the state's presidential ballots.

President-elect Joe Biden's official lead stands at about 14,000 votes, but President Trump has refused to concede and has questioned the integrity of the state's election process without evidence.

The allegations by Trump and others about fraud or improper practices haven't been substantiated, but they're part of the backdrop for another big election: the Jan. 5 runoffs that will determine which party controls the U.S. Senate.

The president's eldest son, Donald Trump Jr., visited Georgia to pledge on his father's behalf that the campaign would fight on. At a rally with about a hundred supporters, he and other pro-Trump leaders repeated their claims about alleged fraud.

Trump Jr. told Georgians he had "lost all faith in the process."

"I think the number one thing that Donald Trump can do in this election is fight each and every one of these battles to the death so that we get full transparency in the process," he said.

A refusal to concede isn't a new concept to Georgia. The 2018 Democratic candidate for governor, Stacey Abrams, also refused to concede to her Republican opponent, Brian Kemp.

Abrams had stayed quiet for 10 days after the election while her campaign focused on getting more absentee and provisional ballots counted. Then she called a press conference at which she made a careful statement: "I acknowledge that former Secretary of State Brian Kemp will be certified as the victor in the 2018 gubernatorial election."

However, she declared, this was "not a speech of concession."

Kemp's duties at the time included overseeing the election. Abrams had been loudly critical of his policies and doubled down on those criticisms in the speech.

"You see, I'm supposed to say nice things and accept my fate. They will complain that I should not use this moment to recap what was done wrong or to demand a remedy," she said. "And I will not concede because the erosion of our democracy is not right."

At the time, Kemp's communications director, Ryan Mahoney called the nonconcession a "disgrace to democracy." Mahoney remains a senior strategist for now-Gov. Kemp.

"I think the one thing that was very clear, which is different than I think what we're seeing now, is that the numbers were undeniable," Mahoney said.

Abrams lost by nearly 55,000 votes and never did concede.

She accused Kemp of voter suppression, which Kemp has repeatedly denied. He has instead pointed to policies that expanded voting access in Georgia, such as online voter registration.

While accusing Kemp of voter suppression was "false," Mahoney said, he acknowledged the practice exists, as does voter fraud, which is why both should be investigated.

"Stacey Abrams said that she had questions, and she wanted to count the votes, etc., etc. — so that same opportunity and process should be afforded to the president as well."

In a statement issued after this story was first published, Seth Bringman, Abrams' spokesman, said her situation in 2018 and Trump's today are nothing alike.

"We had a coherent and well-documented case about why the system failed voters, in truthful and complete sentences. Now, Donald Trump has no evidence and no argument, and thanks to the work of Fair Fight Action, everyone including Donald Trump can have confidence that voters spoke and Joe Biden won," said Bringman.

Democrats have in part credited Abrams, who has pushed for years to change voting practices in Georgia and register more people, with enabling Biden's victory there.

The Trump campaign, for its part, filed one lawsuit in Georgia raising issues with ballots after the 2020 results. It was dismissed the next day.

State elections officials have said there's no evidence of widespread fraud, but they are investigating every claim made. They opted for the hand recount as a part of a planned audit to try to instill confidence in the results, but Sterling said Tuesday that there's no evidence the audit will significantly change the margin of victory.

The current secretary of state, Brad Raffensperger, has said he has felt pressure from national Republicans to find ways not to count valid ballots if that will help Trump's cause.

Kemp declined to address any comparisons of 2020 to 2018 but applauded the recount.

"Georgia citizens, no matter what side of the aisle you're on, should embrace that. Let's let that happen and let the chips fall where they may. People just want to make sure we have integrity in our elections."

One big difference between Abrams' refusal to concede and Trump's refusal lies in the goals of their questions, said Sara Tindall Ghazal, the former voter protection program director for the Democratic Party of Georgia.

In other words, Abrams didn't try to challenge the results.

"Nobody ever sought to overturn the results of the election," Ghazal said. "We sought to improve the mechanisms by which elections will be conducted moving forward. And that's the point."

Ghazal argued that part of the reason why there haven't been the same complaints about the state's election system this year is some of the policies Democrats complained about two years ago have been fixed, including a new "cure" period that allows people to rectify problems with absentee ballots.

The expanded emphasis on early voting and absentee voting because of the pandemic also helped, she said.

"I don't want to say it was perfect, but certainly on Election Day 2020, we saw far fewer problems," Ghazal said. "People didn't have to wait in line; people were given opportunities to cure ballots.

At that 2018 nonconcession press conference, Abrams announced her campaign would file a "major federal lawsuit" over the constitutionality of the state's voting system, which remains in the courts.

"We will channel the work of the past several weeks into a strong legal demand for reform of our election systems in Georgia," she said.

The politicization of elections, which have always sought to be nonpartisan, concerns Myrna Pérez, the elections and voting rights director at the Brennan Center for Justice.

That's the key, she said: providing evidence to back up claims about the voting system, as well as a "commitment to the system," through a proposed solution.

So far, she said, Trump has offered neither.